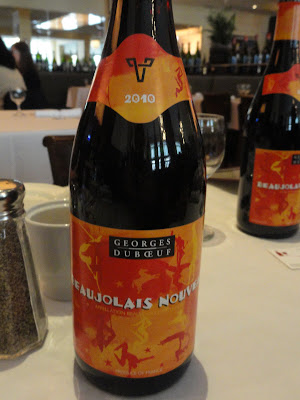 Did you enjoy a bottle of Beaujolais Nouveau at Thanksgiving?  I suspect plenty of people had a bottle on their table. Despite its critics, it is still a very popular choice at this time of year, its simple fruitiness making it desirable to many consumers.

The third Thursday of each November is the official release date for Beaujolais Nouveau, the first wine released each year from the Beaujolais region of Burgundy. Made from Gamay grapes, the wine is produced through carbon maceration, where whole clusters of grapes are fermented together over a period of four to five days. This quickly creates a an easy-drinking, fruity wine.  The release date is now celebrated across the world, with many special events held all over. This is certainly a very successful marketing campaign, though one without pretension. It is a simple wine and no one is trying to say anything differently.  It is intended to be a fun wine, and that is how it is presented. 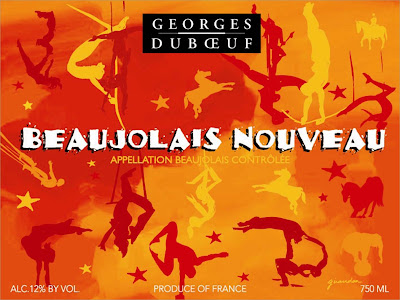 I will admit that I usually buy at least a few bottles of Duboeuf Beaujolais Nouveau every year.  It is very popular with my family and friends, and often ends up on my Thanksgiving table.  This year, I was invited to taste the 2010 Nouveau at lunch at Brasserie JO, a French brasserie in the Colonnade Hotel.  Above,you can see the label, which has a circus theme this year, emphasizing the aspect of fun.  Plus, Le Cirque is quite popular currently, a revival likely due in large part to all of the talented performers in these modern performances.

The 2010 Nouveau (average price $10) actually seemed very different to me than previous vintages, reminding me more of a regular Beaujolais than the usual Nouveau. First, the Nouveau was very dark red in color, not the lighter shades of previous years. Second, its flavor was deeper and less candy-like than other years. Usually, it is referred to as a tutti-fruity flavor, but this year the flavors had rich cherry and raspberry notes, with only a subtle hint of banana.  It was smooth, soft and easy-drinking and paired well with my lunch.  It was a simple wine, but seemed a bit more complex than prior vintages.  I enjoyed it and would recommend that you check it out.

This was also my first time dining at Brasserie JO and I was pleased with my lunch.  Their lunch menu has plenty of choices, including Appetizers, Eggs & Crepes, Shellfish & Seafood, Salads, Entrees, Sandwiches and more.  Prices for most main items ranges from $12.95-$22.95.

I began with the Escargot en Cocotte ($10.95), snails in a garlic butter, and have to say these were some of the best I  have tasted. Tender snails with a buttery sauce and prominent garlic flavor.  I then chose the Croque Monsiuer ($12.95) for my entree, which came with greens and frites.  The sandwich was tasty, though thinner than some others I have had elsewhere. It is a good choice, though still not comparable to my favorite Croque Monsieur. The frites were also tasty, properly crispy on the outside, and soft and fluffy inside. For dessert, I ordered one of the Crépes Magnifiques ($7.95), the Banana-Caramel, and it certainly was magnificent. A quite large crepe, filled with ice cream, topped with fresh banana slices and a sweet caramel sauce. This is large enough for two people to split, and is sure to please.

Don't make assumptions and be a wine snob.  Instead, give the 2010 Georges Duboeuf Beaujolais Nouveau a try.  It is a simple and fun wine, and will please the average consumer. And this vintage seems different than previous ones, and is worth a taste.

Posted by Richard Auffrey at 11:03 AM

sounds like an utter celebration. i'm almost tempted to propose an escargot crawl. who's in? garlic or gastropod haters need not apply :)

An escargot crawl sounds great to me.