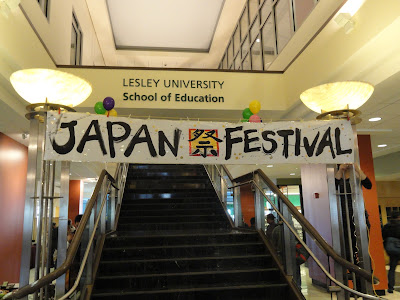 The Porter Exchange, in Porter Square, Cambridge, is one of my favorite destinations, and has a collection of small, Asian restaurants and shops.  Though I still miss Kotobukiya, the Japanese grocery store which was once there.  Yesterday, the Exchange held their first Japanese festival, with several ongoing activities as well as special events. I dropped by for a couple hours and had plenty of fun and delicious food.  Hopefully, they will hold more such festivals in the near future.

My favorite of the Porter Exchange eateries is Tampopo (literally translated as "dandelion"), which only has four small tables and a short counter. It is inexpensive and the varied food, from tempura to kara-age, from maki to soboro bowls, is very tasty.  Before attending the rest of the festival, I stopped at Tampopo for some lunch, fortunately getting there before it got too crowded. With such limited seating, there is often a line at prime dining times. I savored some shrimp shumai, miso soup, and spicy chicken kara-age, a few of my usual choices.  The restaurant is consistently good, and nearly everything costs less than $10. 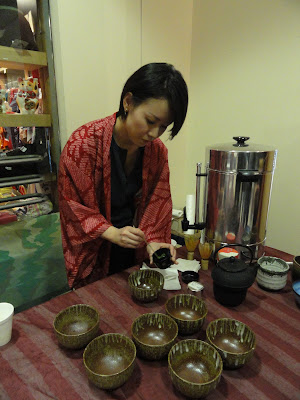 One of the festival tables offered green tea, including in an abbreviated tea ceremony.  The attractive woman above mixed the powdered tea with a whisk, each action carefully conducted. The tea, which I sipped from the bowl, was quite good, with that strong and earthy quality you can find in other green teas.  Some of the other tables had water balloon fishing (Yo-yo Tsuri), brush and ink calligraphy (Shuuji), and origami. 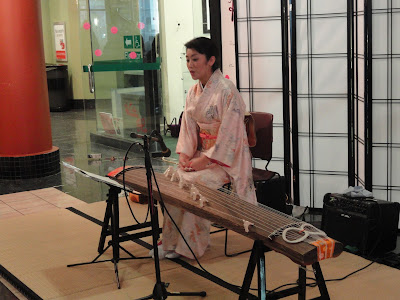 One of the special events was a music and dance performance by Sumie Kaneko and Michiko Kurata. Sumie played a Koto (pictured above) and Shamisen.  This is a dragon koto, a member of the zither family, and Sumie began learning how to play it when she was only five years old.  The shamisen is placed into the lute family and resembles a banjo in some respects.  Sumie played a few songs, even singing at times, while Michiko danced a couple times, once a more formal and slow dance while the other being a more joyous and active dance.  Both women were very talented and the performances were quite compelling.  I have a couple videos but have been unable to upload them yet here.  I will add them when I find a way to do so. Later performances during the day included Aikido, Origami and Wadaiko (Japanese Drum).
Posted by Richard Auffrey at 10:01 AM