Though it is unlikely I will ever be a guest judge on Iron Chef America, I did have the opportunity this past weekend to be a guest judge for Turner Fisheries' first Seafood Recipe Contest.  During the spring, numerous amateur cooks submitted their recipes to Turner Fisheries and ultimately, three finalists were chosen. The Grand Prize is that the winning recipe will be added to Turner's menu, quite a nice achievement. 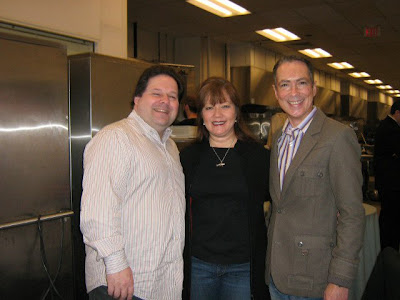 There were four judges, including friends Jacqueline (Leather District Gourmet) and Will (The Boston Foodie).  The fourth judge was Chad Kennedy, the Executive Sous Chef at Turner Fisheries.  We first got to see the three finalists preparing the dishes, and then we were served each dish, one at a time.  It was a bit strange eating with an audience, as the family and friends of the contestants intently watched us, taking photos, and hoping their contestant would ultimately won the contest.  But it was still lots of fun, as well as delicious, getting to eat three very good dishes. 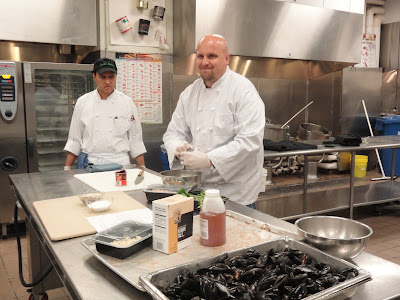 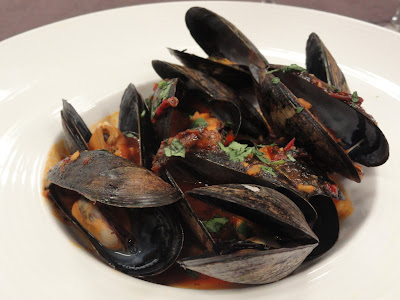 First Place was awarded to David Copeland for his Mussels with Chipotle Pesto.  Tender mussels in a spicy sauce, which would be perfect for dipping fresh bread. 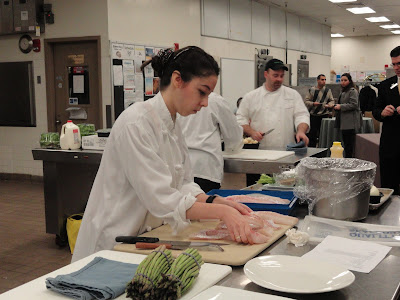 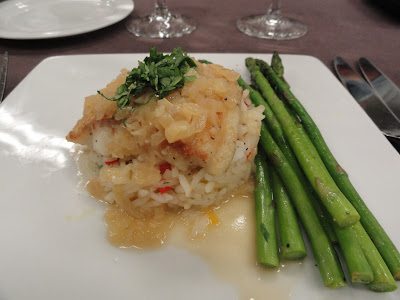 Second Place was awarded to Israa Muezzin for her Cod with Onion Lemon Sauce. A dish that should appeal to many people, with a nice balance of tastes and textures. 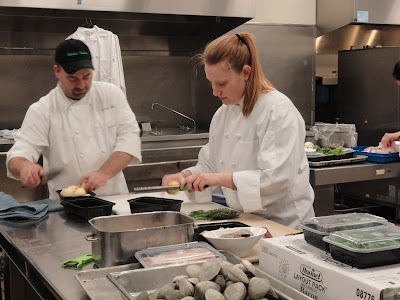 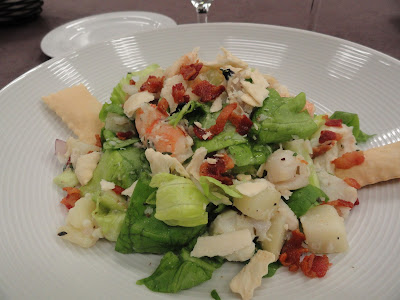 Third Place was awarded to Fiona Coxe for her New England Seafood Salad.  A unique twist on seafood chowder, transforming it into a salad.

All three contestants worked hard, especially considering they were in a strange kitchen and had a time limit on their efforts.  They all deserve kudos for their dishes, and hopefully they will all enter the contest again next year.  You don't have to be a professional to cook well.  It just takes some hard work and passion.  And these three cooks certainly possessed that passion.
Posted by Richard Auffrey at 4:00 AM

We recommend a gratuity of 15-20% and we don't think it's accurate to estimate a waiter's average hourly wage based on how much time a waiter appears to spend during one particular meal. Even if a waiter spends only 15 minutes on a particular patron during dinner time, that may be the busiest time of the entire week, and the waiter may be counting on those tips to compensate for slower periods. Also, tips are sometimes shared among other employees, such as the kitchen and bus staff.