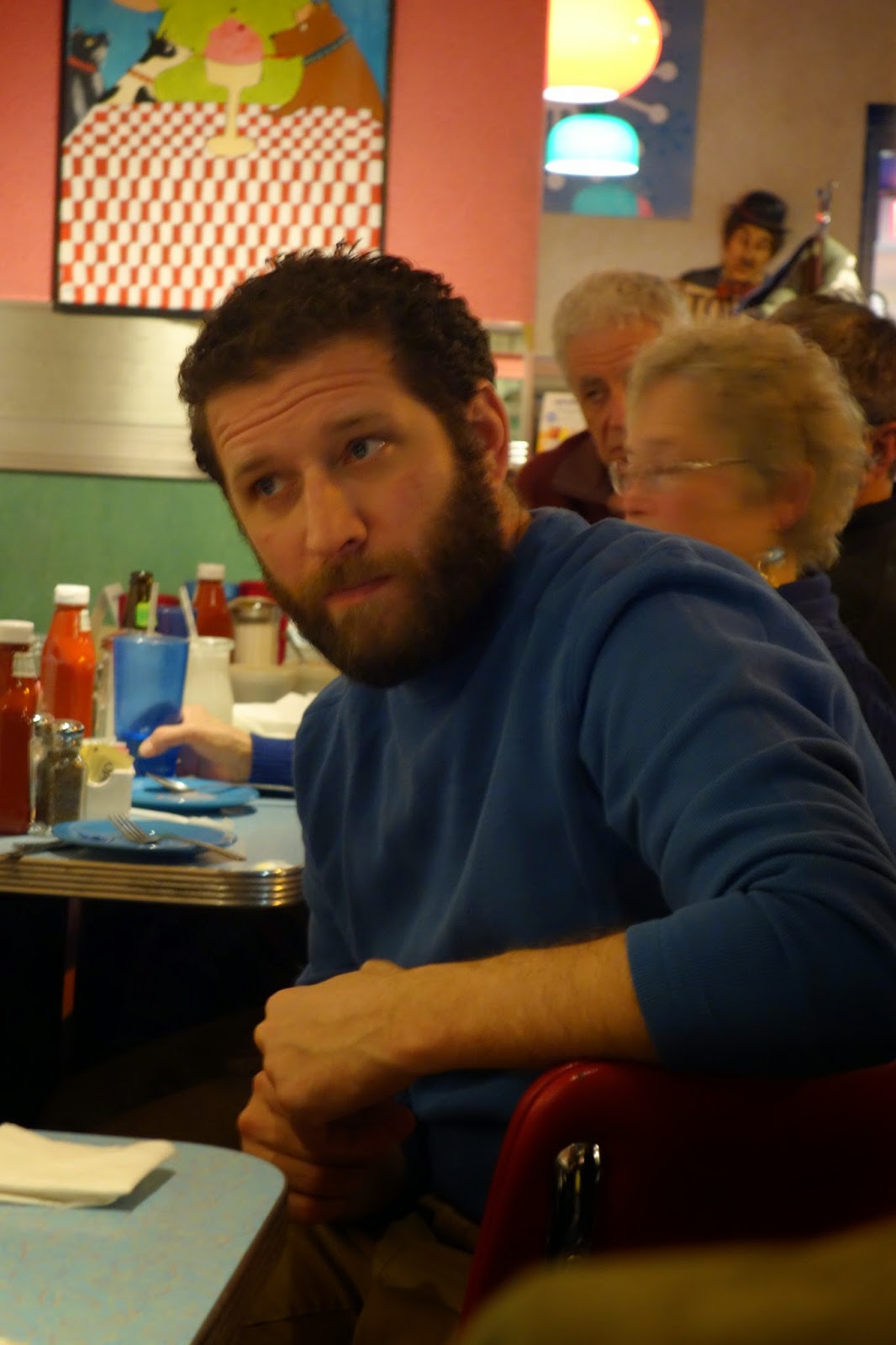 Last summer, I posted these 3 Rules Of Eating Seafood and they remain as important and relevant as ever. They are significant for so many reasons and our country would benefit greatly if more people followed these rules. I talked again about these points last week, when discussing Johnny's Luncheonette, and now I'm following up on that prior post, to discuss the seafood supplier, Red's Best, for that event.

As I mentioned, I recently received a media invite to attend a talk, Dishing About Fishing: What It Takes To Get New England Seafood Onto Our Local Tables, led by Jared Auerbach of Red's Best, a company located on the Boston fish pier near the No Name restaurant. Red's Best basically sells seafood for fishermen though it is so much more as well. Jared spoke about his company, seafood sustainability, the fishermen, and other related topics. There is passion there, and a strong concern for the economic well being of small, local fishermen.

After spending time as a fishermen in Massachusetts and Alaska, Jared started Red's Best in 2008, with a primary goal of helping local fishermen. He wanted to create a better and quicker way for seafood to get from the fishermen to the end consumer. In addition, he wanted to ensure traceability, that the fish sold at a market or restaurant could be definitively traced to the specific fishermen who landed it. Jared also wanted to work with smaller fishermen, those individual boats, rather than the large,commercial vessels that land many thousands of seafood each day.

They currently work with over 1,000 domestic fishermen, essentially all on the East Coast and many in the New England region. Jared stated that his job was "to match supply and demand.," to build an infrastructure to better move seafood. Their advantage isn't in distribution, but rather that Jared claims he can aggregate seafood better and faster than others. Using their special technology, they can streamline seafood transactions, saving time and money. Seafood can reach the end consumers quicker than under the traditional methods, such as seafood auctions, meaning the seafood is fresher.

These QR codes are intended for the wholesalers and retailers, not the consumers, and provide them information they can share with their customers. Review this sample to see what you'll find when you check the QR code. There are listings for the name of the fisherman, the species of the seafood, the name of the fishing vessel, the gear type used, and the port where the seafood was landed. That is the type of information which helps people make determinations on sustainability. In addition, the QR code provides access to a PDF that contains all of that information and which can even be customized for a restaurant, market or store. This is a quick and easy way for retailers to have all of the relevant information concerning the source of their seafood.

Red's Best does not negotiate a price with the fishermen at the docks but rather pays them the fair market value they recover when they sell to their hundreds of wholesalers and distributors, including Sysco. That requires a level of trust on behalf of the fishermen, however considering the large number of fishermen that work with Red'ss Best, it seems their trust is well placed. Red's Best also sells to a few local fish markets and in time, they hope to start selling directly to consumers.

Part of what probably helps the fishermen's trust is that Red’s Best purchases whatever seafood the fishermen land, leading to a wealth of diversity. For example, in Massachusetts alone, they take in more than 60 different types of seafood, mostly wild except for some farmed shellfish. Jared stated that every day is a challenge as supply & demand always varies, and they are never sure what seafood species they will have available for sale. As such, Jared wants people to be more flexible in their seafood choices, and not to restrict themselves to the usual seafood preferences.

As such, Jared tries to get their customers to commit to a certain amount of seafood each week, without committing to specific species. That is kind of like a CSF (Community Supported Fishery) where a person commits to a share of seafood which is delivered on a regular basis, but never know what species they will receive. This flexibility helps keep the prices of the seafood down, promotes diversity, and benefits seafood sustainability.

In previous multiple posts, such as Boring Americans: The Seafood Edition and Rant: Stop Eating Cod, Tuna & Salmon, I've encouraged people to expand their palates, to enjoy different seafood species than what they are used to, to find new favorites. The majority of Americans generally only eat ten species of seafood, yet there are so many other delicious species available to them, In some circles, these species may be referred to as "trash fish," because so few people want to eat them, but they would be better referred to as "under-utilized fish." The reason these fish haven't been eaten more is due to ignorance rather than their lack of taste. If people blind-tasted these under-utilized species, they would likely enjoy them. Besides being delicious, these under-utilized species can be very sustainable choices, are usually less expensive, and help fishermen sell more seafood.

Is all of Red's Best seafood sustainable? That is a question where the answer depends on your own definitions and standards of "sustainable seafood." Jared states that all of their seafood is sustainable because their fishermen follow all of the strict government regulations on fishing quotas They feel that if the government permits the capture of certain levels of fish, then those fish are considered sustainable. Jared also noted that they report all of their catches to the government, to ensure they are following the regulations.

In 2012, Sam Rauch, the Acting Director of NOAA, gave a State Of Fisheries Address which echoes Jared's sentiment. Rauch claimed that when a fish is legally caught by a U.S. mandated fishery, then it is sustainable, considering the fact that the U.S. fishing industry is the most highly regulated in the world. Some fishermen think that the NOAA regulations go too far, and are not based on the best science. They want less regulations, and to be able to catch more seafood. These fishermen would agree that the seafood they legally catch is sustainable.

Not everyone agrees with this position, and you'll find some organizations whose positions on sustainability differ from that of Red's Best and NOAA. For example, Atlantic Cod and Blue Fin Tuna is permitted to be caught under NOAA regulations, though only in limited amounts. However, other organizations believe you shouldn't eat either of those two species because they are endangered. Some will say to totally Avoid these species, while others are a bit more measured, delineating specific instances, such as by the method of catch, where they are acceptable.

Who is correct? That is not an easy question to answer because of the complexities involved in the area of sustainability. We should be wary of making broad statements about sustainability but rather look carefully at the specifics involved, such as the species of fish, method of catch, geographic area, and much more. Knee jerk reactions need to be replaced with more measured reasoning.

In discussions of seafood sustainability, the element of social issues is becoming more and more important, which I've written about several times, including a few months ago.. We should be considering the plight of fishermen and seafood workers in our discussions on sustainability. That is an area of significance to Jared, supporting small, local fishermen, helping them make a sustainable living at fishing. With all of the quotas and catch restrictions, it has been a very tough economic situation for small fishermen, and Red's Best is working to helping those fishermen survive. This helps our local communities and is worthy of our support.

The philosophy of Red's Best fits my 3 Rules of Eating Seafood, promoting more seafood consumption, especially local and sustainable species. Red's Best also helps to promote the consumption of under-utilized species and support the economic well being of local fishermen. In addition, they are helping to make seafood more affordable for all. It was a pleasure to meet Jared, and I'm impressed with his company and its philosophy. You should support retailers which purchase their seafood from Red's Best.
Posted by Richard Auffrey at 3:00 AM

You make a good point about trying to ensure that you eat sustainable sea food. Many fish populations are suffering world wide from over-fishing. I grew up in Oregon, where there is some fantastic sea food, but you want to make sure that good sea food will be around for future generations to enjoy as well. http://www.alaskanturtle.com/services