Thirst Boston: Creating and Catching the Rising Tide of Cocktails 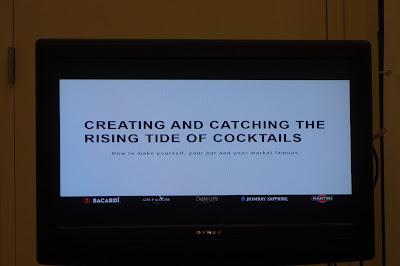 "We do what we love and don't let anything scare us from doing it."
--Chris Cusack

How do you succeed at business, and more specifically in the bartending industry? Most of the seminars at Thirst Boston held on Monday were trade-focused, providing very practical information for bartenders, mixologists and others. Even if you weren't in the bartending industry, some of the seminar topics had cross-application to a number of other fields and were worth attending. Just reread the initial quote I posted and see how it can easily apply to so many different endeavors.

This advice, and much more, was provided at a seminar called Creating and Catching the Rising Tide of Cocktails, which's description stated: "Why are some cocktail cities better known than others? How do some cocktail bars catch a wave when others watch it roll by? What is it about some bartenders that draws others into their world to the point that their notoriety propels them to a position of influence and credibility?" The seminar was also subtitled, "How to make yourself, your bar and your market famous." I don't own a bar. or have any plans to own one. I also don't work in a bar and probably never will. However, I found value in this seminar.

The presenters at this seminar included: Ian McLaren, Director of Advocacy for Bacardi USA (who moderated the seminar); Lesley Ross, beverage director of Canard in Houston, Texas; Sean Muldoon, owner of the Dead Rabbit in New York City; and Chris Cusack,  a co-owner of Treadsack, a restaurant group in Houston. Each had a fascinating tale to tell, about their rise in the business, and they shared some of their insights with the attendees. 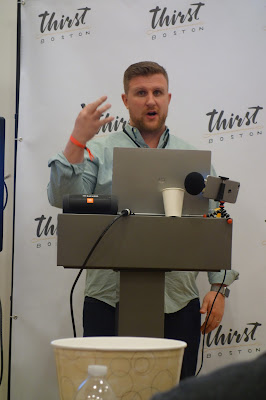 Ian led off the seminar providing some statistics about the bartending industry, showing some of the influence of bartenders as well as that of the cocktail enthusiast community. To start off, there are approximately 700,000 to 800,000 bartenders in the U.S. More than 50% of those bartenders identify as "an authority on cocktails." Interestingly, about 44% of all the drinks served by bartenders are recommendations. Those recommendations can help shape the market as well as better define the style and concept of a bar. It also shows how many people put trust into their bartender to select a cocktail for them. It is thus important for bartenders to form a rapport with their customers, to create a bond of trust which will lead to more recommendations.

The global bartending community is well connected nowadays, and it is often easy to trace the influences of specific bartenders and bars through a community. Bartenders commonly change careers every 2.5 to 3 years, meaning that is the approximate length of a generation. Fortunately, those bartenders train replacements and others before they move on, continuing the traditions and spreading their influence. It is a network of bartenders, a spiderweb that spreads across cities and states, and sometimes even across the country.

The cocktail enthusiast community is important in supporting the bartender community, especially as they are a vocal community, one active on social media. They assist in spreading the word about favored bartenders and bars, telling others about special events, and much more. It would be far more difficult for bartenders to attain fame without this vocal community of enthusiasts. Ian stated that there was no better time than now to "publish your message." 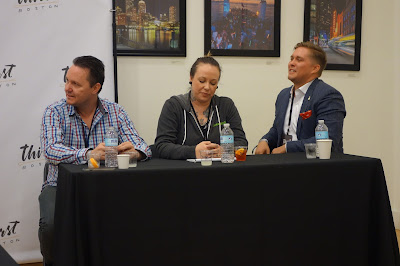 For the rest of the seminar, Ian posed a number of questions to the other three panelists. They shared their experiences, and some of their answers differed from each other, simply indicating that there is no single path to success. What works for one person may not work for another. However, that doesn't mean you can't garner wisdom from the experiences of others.  I'm going to share some of what I consider the most valuable advice from these panelists.

What does success mean? Both Sean and Chris had similar responses, essentially that you must never be content with what you have accomplished. You must continue to evolve, to strive for your next goal and not sit on your laurels. All three panelists have lofty goals and continue working very hard to create more and more.

What are foundations of building an empire? The three answers to this question were different in some respects. Sean stated you should set yourself the most distant goal and then move toward it, noting that luck plays a part as well. Leslie also stated you should set your goal but then backtrack the steps to what will get you there. This will better help you differentiate your goals from your dreams, what is realistic against what is unrealistic. For Chris, the key was managing your priorities.

During a brief discussion on the role of the broader community's importance to success, Leslie made a fascinating point, which I've paraphrased as "Knowledge is a vessel that can get full so you must give some away so you have room for more." The importance of sharing information and experience with others is an important aspect. It can help spread your influence as well as enhance your reputation.

Who is your competition? Leslie stated that everyone is your competition and that you must always be paying attention to prevent surprises. You also should learn from others, including those with other skills sets and in other industries. Ian also added that you need to define your enemy and then try not to emulate them or their actions.

How do you get the word out? Chris stated that you should do the type of things that media pays attention to, often the biggest, craziest, and most fun. However, Chris also noted that there are many stories that the mainstream media won't cover, but which are deserving of attention. In that regard, Chris created his own magazine about the cocktail industry to cover such stories. I also think blogs can help in this respect, telling stories that the mainstream media might not want to cover.

At the end of the seminar, Ian showed a short TED video, with a man dancing alone at some public event. In a short time, someone else started dancing with him and eventually a large crowd was all dancing together. The idea was that the first follower is also a type of leader and new followers will actually follow the first follower rather than the leader.  The original leader should treat his initial followers as equal, as their importance cannot be underestimated. As the size of the group grows, people see less risk in getting involved so are more likely to participate.

Now starting working toward your own goals.