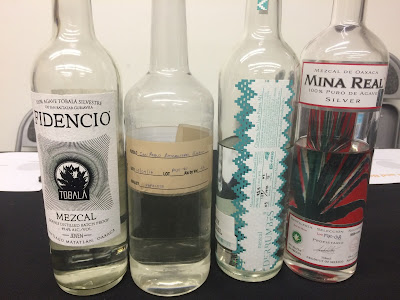 One of the seminars which I most looked forward to at Thirst Boston was Mezcal & Beyond, and its  description stated: "Some version of mezcal--from the Nahuatl word meaning “oven cooked agave”-- is made in every one of the 31 states of Mexico, utilizing a wide range of production techniques and dozens of different species of agave. One of the few distilled spirits to exhibit terroir--a true sense of where it comes from--tasting it easily leads to discussions of history, geography, culture, language, cuisine and politics. Join some of the movers and shakers of today’s mezcal revolution and get a peek into this fascinatingly vast and astoundingly delicious category." The seminar included a tasting component, a chance to taste several intriguing Mezcals, including one which is not even commercially available yet.

The presenters at this seminar included Sergio Mendoza, the creator of the Derrumbes line of Mezcal; Arik Torren, the US importer of Fidencio Mezcal; Misty Kalkofen, Mezcal ambassador for Del Maguey; and Jake Lustig, who has created, owned, distributed, and developed range of Mexican spirits from tequilas to mescals, and represented Mina Real Mezcal. The passion of these individuals for Mezcal was more than evident and we could have spent several hours discussing a wide range of Mezcal-related issues, from NOM 199 to sustainability. They had to rein in some of their excitement, knowing that there was only a limited amount of time for the seminar.

The session began with some basic information about Mezcal, an introduction to this intriguing Mexican spirit (you can learn some basics in one of my recent posts). The discussion then ranged across a variety of topics with a significant discussion involving the effects of the Mezcal Denominación de Origen (DO), mostly concluding that the DO system should evolve and change, with an important goal of protecting people and not just the product. There was a thought that maybe the Mezcal DO was too large and should be changed to cover smaller regions instead, In addition, all of the states which make Mezcal should be included and these smaller DOs should also reflect the regional names for Mezcal.

I'm not sure that would be the best option and think that rather than destroy the existing Mezcal DO, that maybe you could work within its rules. These are only some preliminary ideas which came to mind during this seminar and more thought needs to be dedicated to the concept. Within the wine appellation system, you sometimes find sub-appellations, smaller geographic areas within the larger protected region. Why not apply that concept to Mezcal?

At one point during the seminar, Misty made an interesting comparison, stating that the cooking of agave piñas is similar in some respects to a traditional New England clambake on the beach. That could be an excellent way to explain the tasting process to local people. Misty also stated that the texture of Mezcal is very important to her and that by adding water to it will change that texture. So, she did not advise on adding water to Mezcal as you might do it to a strong whiskey. I've heard others with a country opinion, who suggested you might want to add a little water if the alcohol content was too high for you.

The sustainability of agave, especially where it involves tequila and Blue Weber agave, has often been discussed yet another sustainability issue was raised during this seminar, an issue which receives far less attention and is more specific to Mezcal. When roasting agave, wood is the most commonly used fuel, yet the sustainability of the forest is not considered as much as it should be. Erik mentioned how Fidencio addresses this issue, by purchasing old oak staves for 50% of their fuel source. Mina Real also uses brick ovens to avoid consuming firewood. 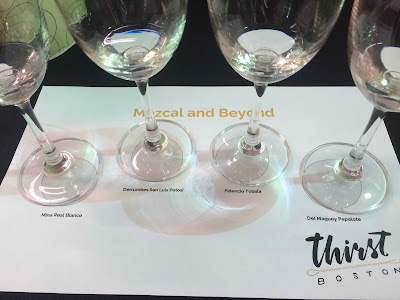 The Mina Real Blanco (about $27-$35) is produced in a 300-year old distillery located in the town of Santa Catarina Minas in Oaxaca. It is made from 100% Espadin agave, which grows at an altitude of 4800 feet., and it has a 42% ABV. The piñas are steamed, rather than roasted, in cantera stone kilns (cantera being a local volcanic rock) and it is distilled in clay pots.  Lacking the usual smoky aroma or taste of other Mezcals, it is more floral and fruity, with a smooth, clean taste. There are citrus flavors, a mild earthy aspect and some intriguing chocolate notes. Jake even recommended putting a shot of this Mezcal into your coffee. This would make for an excellent introductory Mezcal, a gateway to the wide world of Mezcal and helping to dispel the myth that all Mezcal must be smoky.

The Fidencio Tobala ($130-$145) has roots back over 120 years, when Fidencio Jimenez started making Mezcal. The distillery is located in Santiago Matatlán in Oaxaca and they started their own Espadin agave farm back in the 1950s.  Interestingly, they practice organic and Biodynamic agriculture including harvesting during the new moon. They believe the moon phases effect the flavor of the agave and that the new moon leads to a more delicate Mezcal. Based on some quick research, they might be the only Mezcal distillery involved in Biodynamic agriculture.

Fidencio only does a single batch of wild agave each year and though they don't label their Mezcals as "vintage," they are identified by a Lot number which essentially tells you the year of harvest. This Fidencio Tobala was Lot 12, indicating it was from the 2012 harvest, and it has a 45.5% ABV. In the production, they used a horse-drawn tahona to crush the piñas and roast them using Encino, a special type of American black oak. Fermentation occurs in 1000 liter pine vats, the porous wood supporting the bloom of bacteria, and then distillation occurs in a copper pot still. I was impressed with this Mezcal, finding it complex and intriguing. It was silky smooth, with a mild smokiness and pleasing citrus and herbal notes. On the lengthy finish, there was a nice peppery element. Slowly savored, this is the type of Mezcal that will make you think, relishing each unique flavor you discover. Highly recommended.

Del Maguey was founded in 1995 by Ron Cooper who is largely responsible for introducing the U.S. to artisanal, traditional Mezcal. They produce a series of single village Mezcals, made by small, family producers and which are also 100% organic. The Del Maguey Papalote is currently not available commercially and won't be released into the market until around August 2016. This Mezcal was produced by Aurelio Gonzalez Tobon, the 9th family that Del Maguey is working with, and the first family located outside Oaxaca.

This Mezcal is from the region of Puebla and initially, Del Maguey was going to release this spirit as a "distillate of agave" as Puebla wasn't included in the Mezcal DO.  However, they met some resistance from the Alcohol and Tobacco Tax and Trade Bureau (TTB) who seemed to have trouble understanding why this could;t be labeled as Mezcal. The delay though had a silver lining as in 2015, Puebla was finally added to the Mezcal DO so now Del Maguey didn't have to call it a distillate of agave. Papalote is the Puebla name for the Tobala agave and Del Maguey wants to use the regional name out of respect for the region and family producing the Mezcal.

This Mezcal is made in a traditional way, roasting piñas in a horno, fermenting in an open air vat, and distilled for about 35 hours in a copper pot still. In some respects, this Mezcal reminded me of the Fidencio, which isn't surprising as they both use the same type of agave. It too was complex and intriguing though it tended to possess more of a floral aspect and fruit flavors of pear and apple. There was only a mild smokiness, a very lengthy finish without the pepper of the Fidencio. This was an elegant Mezcal, another one which you will want to slowly savor with good friends.  Highly recommended.

The Derrumbes San Luis Potosi ($70) is produced by Emanuel Perez in the village of Charcas in the state of San Luis Potosí.  It is made from Salmiana, a wild agave which has a very low yield, and has a 43.5% ABV. The piñas are cooked above ground using some dried agave leaves, and thus is is not as smoky as some Mezcals, and is later fermented in clay pots. I found this Mezcal to have strong vegetal and herbal flavors, including some jalapeño, pepper, and floral notes. There was also an intriguing streak of minerality in this Mezcal, with a powerful finish that presented a complex and harmonious blend of citrus and spice. There is plenty going on within this Mezcal yet it all works well together. Another delicious Mezcal you should check out.

Drink more Mezcal!
Posted by Richard Auffrey at 9:30 AM

Did you know you can create short urls with AdFly and get money for every click on your short links.