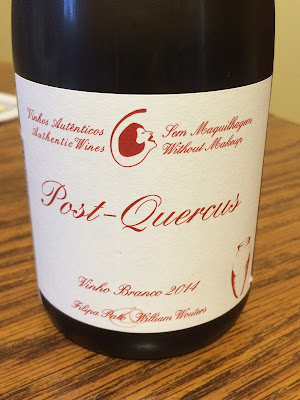 Would you drink a wine made from "fly droppings?"

As I perused the wine shelves at Streetcar Wine & Beer in Jamaica Plain, I was intrigued by a Portuguese wine that was aged in a clay amphora. I knew nothing about it beyond what I read on its label but that was sufficient for me to buy it, to take a chance on it. I've enjoyed a number of other amphorae wines but I've never previously sampled one from Portugal. In my never-ending vinous quest, this was a unique wine I craved to experience and wasn't disappointed.

For more than five generations, the Pato family has been involved in wine production in Portugal and Luis Pato has earned a excellent reputation. He began his career in the Bairrada region, creating wines from the Baga grape. His daughter, Filipa Pato, left Portugal after university to travel to a few different wine regions, including France, Argentina, and Australia. Upon her return, in 2001, Filipa started her own winery in the Bairrada region, with a special concern for growing and promoting the Baga grape. She eventually chose to age one of her Baga wines in amphorae and apparently it worked so well that she chose to age a white wine in amphorae too.

The 2014 Filipa Pato Post-Quercus Branco ($18/500ml), imported by Oz Wine Company, is made from 100% Bical, from an organic vineyard, and has an alcohol content of only 11%. It was fermented with indigenous yeasts and then aged in clay amphorae which were buried underground. Post-Quercus, which translates as "after oak," is intended to refer to wine aged in amphorae rather than oak barrels. The idea behind the amphorae is that they permit gentle micro-oxygenation but do not impart flavors to the wine as does oak.

Bical is an indigenous Portuguese grapes which is mainly found in the Bairrada and Dão DOCs. In the Dão, it is also known as Borrado das Moscas, which translates as "fly droppings!" It received that name as the yellow-skinned grapes have small brown freckles which make it look spotty. It is an aromatic, early-ripening grape, known for its high acidity. Bical ages well in oak and does well with extended lees contact too. It is commonly used in the production of sparkling wines, especially blended with Arinto.

On the nose, I found this wine to present some appealing stone fruit aromas with floral accents and a slight herbal note. On the palate, I was pleased with the bright and juicy peach & pear notes that were accompanied by some briny accents and hints of minerality. It possessed a smooth texture with a mildly creamy aspect and a lingering, satisfying finish. There was plenty of complexity and each sip was both intriguing and delicious. This would be enjoyable on its own or paired with seafood, chicken or other light, summery dishes. Highly recommended!