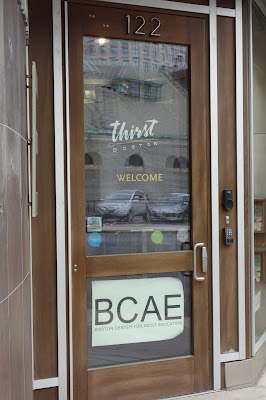 "To alcohol! The cause of, and solution to, all of life's problems."
--Homer Simpson

I've spent the last three days sampling and drinking a wild variety of spirits and cocktails, including Rum, Rye, Vodka, Mezcal, Bourbon, Scotch, Gin, Cider, Rhum, Whiskey (from all over the world), Liqueurs, Sake, Baijiu, Water and more. What a fun, educational and tasty three days.

Yesterday, the 3rd Annual Thirst Boston ended and it's now time to reflect and contemplate over my experiences this past weekend, as a media guest, immersed in the world of spirits and cocktails. I filled many pages in my notebook with informationI garnered from this conference. As I've also attended the last two thirst Boston events, it is interesting to compare and contrast the three events, to see how it has evolved over time. In short, this year's Thirst Boston was excellent once again, albeit with some minor issues that could be improved at next year's conference.

This year's event was put together by two local professionals, Maureen Hautaniemi, and Nick Korn, though obviously there was a large group of other people who helped to contribute to the organization and operation of the conference, including sponsors, presenters and volunteers. There were ample individuals at the event with the black Thirst Boston t-shirts, helping to ensure everything ran as smoothly as possible. Logistically, the conference seemed to run very smoothly and largely on time. The staff and volunteers all possessed a positive spirit and were very helpful with questions and issues. 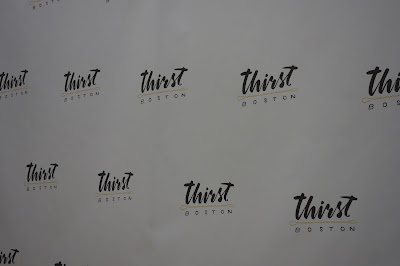 This year, Thirst Boston was held at the Boston Center For Adult Education (BCAE), on Arlington Street, a change from last year's Fairmont Copley Hotel. The conference events were held on two floors, and it was easy to access all of the main seminar events and pop-ups. I think this venue worked well for this type of conference and hope that they return again next year. Each year of Thirst Boston has been held at a different venue and it would be good to have some regularity on the location.

The event begun on Friday night, May 20, with The Thing at the Hampshire House and ended on Monday morning, May 23, with a number of private industry events. In the previous events, the heart of the event took place on Saturday and Sunday but this year they added more events, especially seminars, on Monday too, expanding the size and scope of the conference. Most of the Monday seminars were more trade-focused but they still were open to anyone interested in the various topics. 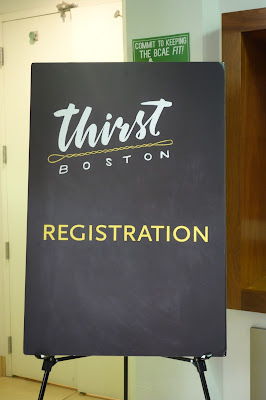 Compared to last year's prices, the cost of individual seminars remained the same, $25 per class. The two and three day passes actually cost less this year. As such, prices remain reasonable and even if you are on a very limited budget, you still can experience plenty. For example, if you spent only $25 to attend a seminar on Saturday, you were also able to attend, for free, two Pop-Up Bars, the Boston Shaker Pop-Up Store, the New England Craft Showcase and the State Lines: New England Pop-ups. That is plenty of spirits and cocktails for one low price. 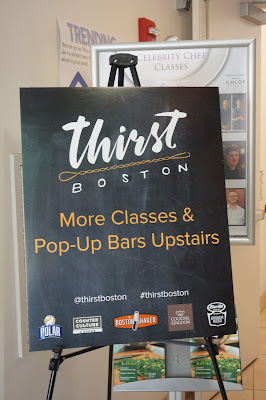 "It takes only one drink to get me drunk. The trouble is I can’t remember if it’s the thirteenth or the fourteenth."
--George Burns

There was a nice diversity of social events, including the Friday Opening Night Gala, The Thing, Blender Blender (a bartender competition of frozen drinks), State Lines: A New England Popup (number of bars offering special local spirits), three Cocktail Dinners (such as Stammtisch: German Feast with Jägermeister) and a couple of After Parties.  Thirst Boston has always been a very social conference, with plenty of parties and after-parties, ample opportunity to drink and mingle with friends old and new, as well as to meet new people. Though I didn't attend the late evening parties, those I spoke to who attended such parties enjoyed themselves.

There were also four Pop-Up Bars with spirits and cocktails from companies such as Mad River Distillers, Anchor Distilling, Konga Line, Sacred Bond, and Lejay Cassis. Essentially, you could taste some spirits neat or in one of a few different cocktails. You could taste all of the different cocktails they were offering and return later to try them again. I stopped by several of the pop-ups and enjoyed much of what I tasted, and will be discussing some specific alcohols and cocktails in a later post. 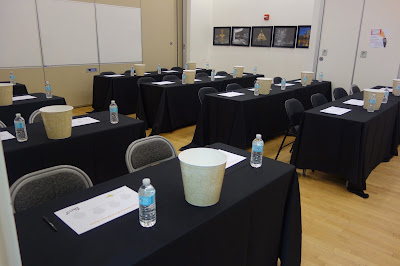 In addition, there were about 38 seminars, about 15 more than last year's. As last year, each seminar ran for about 90 minutes and they covered a wide diversity of subjects, from local Cider to Japanese Whiskey, from Rhum Agricole to Baijiu. I attended nine seminars, which were generally well attended. Overall, the presenters did a great job and there were tasting components to all of the seminars I attended. At each seminar, your seat also included a bottled water and a pen, and there was also a spit bucket very close. Hydrate and spit, a great way to navigate all of the alcohol you might sample that day.

What I wrote last year about the seminars applied equally as well this year: "Another good aspect of the seminars is that they generally promoted an anti-snobbery attitude, helping to bust some of the myths concerning spirits, especially in regard to what is "the best." No one was put down for whatever they preferred to drink, and exploration and expanding your palate was encouraged. The seminars were often educational, but the presenters also made it fun, so it wasn't a dry, scholarly lecture."

No matter your interest or preferences, there was probably plenty for you to enjoy, and there were certainly lots of opportunities to taste intriguing spirits and cocktails. In the near future, I'll be posting specifics about the seminars I attended. 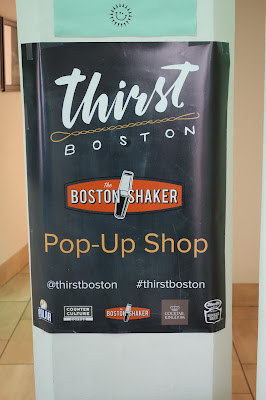 Once again, Adam Lantheaume of the Boston Shaker (the best cocktail supply store in the Boston area) opened a Pop-Up Shop at Thirst Boston, offering a variety of cocktail related items for sales, from bitters to glassware, books to t-shirts. So many interesting items for purchase and I. bought some bitters. 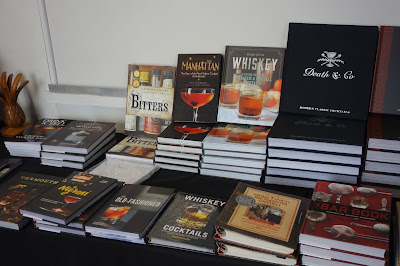 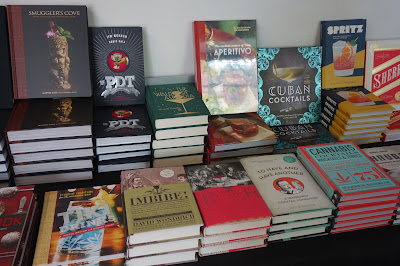 Some of the interesting spirit and cocktail books that were available. 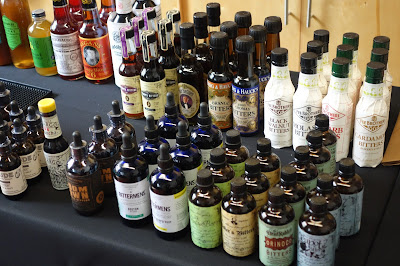 Lots of bitters, of all flavor types, ready to enhance any cocktail. 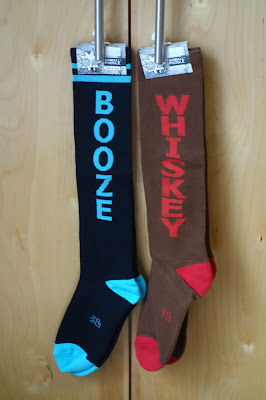 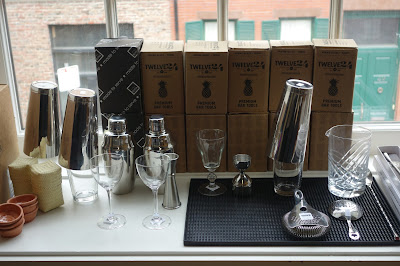 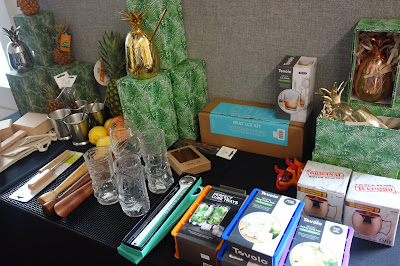 Glassware, shakers, and much more. 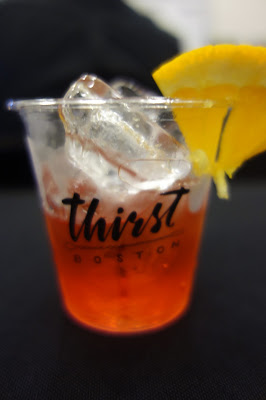 "There cannot be good living where there is not good drinking."
--Benjamin Franklin

From their website, Thirst Boston is stated to be "... a weekend long cocktail festival focused on education all about cocktails and spirits. We have amazing classes during the day with everything to get you need to get started making cocktails at home, all the way up to career focused education for hospitality professionals. Our nights are full of celebration and fun, with a black tie gala, a bar crawl full of New England's best bars and a blended drink party to put all blended drinks to shame." In addition, the website states that their intent is to be "...a gathering of bartenders, industry icons and beverage connoisseurs from Boston and beyond. Our goal is to educate attendees on the science, craft, and taste of all things related to the art of drink."

The primary attendees at Thirst Boston seem to be those involved in the trade, trying to expand their knowledge, hone their skills, network, and have fun. There is only a small percentage of attendees who are spirit and cocktail enthusiasts, who don't work in the industry. I think many other enthusiasts would benefit from attending Thirst Boston, expanding their own knowledge and learning about a wide variety of spirits and cocktails. Plenty of these people attend tasting events at local liquor stores so why not come to Thirst Boston?

Yesterday, I covered the Diversity issue which I have raised after each Thirst Boston event. Hopefully that post will start a discussion to improve the local spirits and cocktail community. 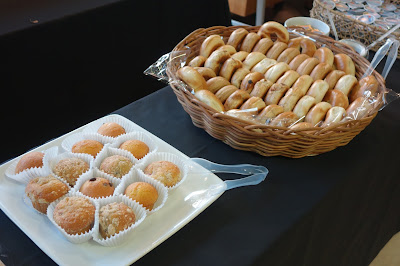 One of my complaints, which is the same as I voiced last year, is that if you wanted to maximize your experiences at Thirst Boston, trying to attend as much as possible, you had little free time to grab lunch. There was only 15 minutes between each seminar, and during that time, you also might want to check out the pop-up bars. Except for some breakfast foods on Monday, Thirst Boston didn't supply any food to the attendees, not even cheese & crackers. And no food with all that alcohol is not a good thing. It would have been beneficial to have had a food truck or two outside the BCAE for the attendees. Hopefully, Thirst Boston will work on the food issue for the next conference 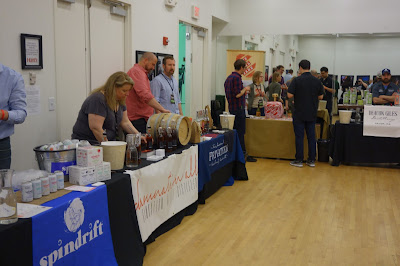 Thirst Boston fills an important need in the Boston area, providing a large scale spirit & cocktail event. There are plenty of large wine events in the area each year, but spirits and cocktails have far less representation at large events. Their seminars provide important educational information, their tastings provide important opportunities for sampling, and their parties provide fun, social occasions. I look forward to next year's Thirst Boston and hope that it is even bigger and better.

If you attended Thirst Boston, what were your thoughts?
Posted by Richard Auffrey at 2:36 PM