Thirst Boston: New Kids On The Block--Whisky From Unexpected Places 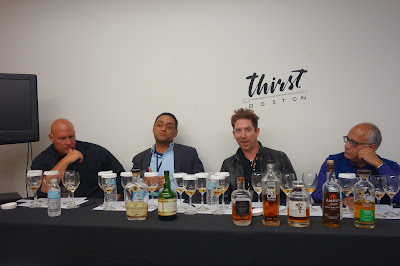 You probably know about Bourbon from Kentucky, Scotch from Scotland, and Irish Whiskey from Ireland. You might even know about the wonderful whiskey now being produced in Japan. However, were you aware, or have you ever tasted, whiskey made in France, England, Taiwan or India?

At Thirst Boston, you had the opportunity to taste whiskey made in these countries at a fascinating seminar called New Kids On The Block: Whisky From Unexpected Places and its description stated: "These days whiskey means so much more than Scotch and Bourbon. From France to Taiwan, American bartenders and whiskey drinkers are now able to drink delectable brown potations from across the globe whether it be Japanese whisky from a 90 year old distillery or some of the first releases from an English upstart." It was intriguing to be able to taste whiskey from these countries, to obtain a glimpse into the differences they bring to this category. 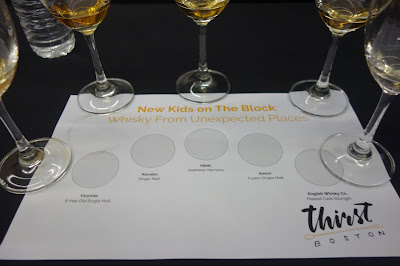 In 2015, Americans consumed approximately 830 million liters of whiskey, and that amount continues to grow each year. Americans are enamored with whiskey and love exploring the various brands they find on the shelves of their local liquor shops. As they peruse these shelves, they're likely to start seeing whiskey made in countries not commonly know for whiskey production. I'm sure that will intrigue many whiskey lovers though they might not be willing to buy an unknown product. However, I encourage these consumers to expand their palates and try these new whiskies, as these countries are making some damn good whiskey. 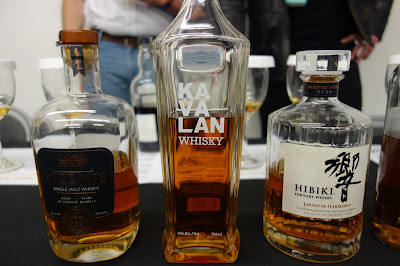 From France comes the Vicomte 8 Year Old Single Malt ($40-$45) which is produced by a 3rd generation distillery located in the Cognac region. The distillery once provided bulk product for Cognac but eventually decided to make a product for themselves. They begin with 100% organic barley, grown and harvested in the Poitou-Charentes region of France. The whiskey is distilled twice in copper pot stills before going into French Oak Limousin Barrels for about six months. Then, it is aged for about 8 years in first-fill Cognac barrels.

This was a delicious, easy-drinking whiskey which might remind you of bourbon with its sweet vanilla and caramel notes. There were also some fruity notes, some apricot and citrus, with a touch of chocolate. Silky and smooth, it would be a great introductory whiskey which should appeal to many drinkers. The Vicomte was made to be easy to mix in cocktails and I think it would work well in that regard.

Vicomte started aging their whiskey about 12 years ago so they are planning to release a 12 Year Old whiskey in the near future. This is the second French whiskey I've ever tasted and both pleased me. There are only a handful of French whiskies available in the U.S. and I would recommend you check out the Vicomte.

The Kavalan Single Malt is made in Taiwan and I have previously written about this distillery and several of their whiskies so I encourage you to check out that prior post, Kavalan: Taiwan Whiskey In short, Kavalan is making some amazing whiskies.

During the last hundred years, Japan has made huge strides in the production of whiskey and now win top international awards for their products. Most whiskey lovers will confirm that Japan is making many fantastic whiskies and now they are eagerly sought. I'm a fan of Japanese whiskies and have written about them before such as Nikka Whisky. Suntory Whisky, which makes the Hibiki, Yamazaki and Hakushu brands, is all about innovation. With an assortment of different types of stills, different oaks, different grains, and more, they can produce about 160 different styles of whiskey. That gives them a huge amount of "ingredients" for the art of blending, which is vitally important to them.

Their former Master Blender used to eat the same meal every day, Tempura Udon, to keep his palate neutral. In addition, he didn't smoke and wouldn't eat garlic. That is certainly dedication and discipline. His replacement has been emulating a similar diet for the last nine years, though he's eating Soba instead of Udon. The Master Blender always thinks he can make a better whiskey, continually working toward perfection though he knows he will never reach that ideal. Hibiki is intended to be a "blend of harmony," and the foundation of their Hibiki product line.

The Hibiki Japanese Harmony ($60-$70) is a blend of at least 10 malt and grain whiskies, aged in five different barrel types, including American white oak, Sherry casks, and Mizunara (Japanese oak) barrels. The whiskies also come from three different distilleries, including Yamazaki, Hakushu and Chita. I think the Master Blender has accomplished their goal, with a whiskey with a fascinating and harmonious blend of flavors. It is light and on the sweeter side, with notes of honey, caramel, candied fruits and baking spices, though there is also a touch of smokiness and floral accents. It has an intriguing depth of flavors, with a long, pleasing finish. You really need to sample the wonders of Japanese whiskies. 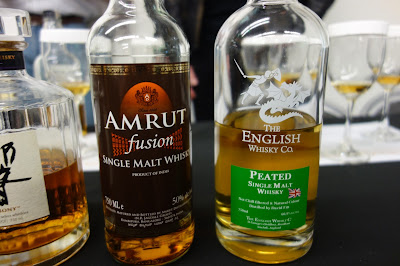 It might surprise you to learn that India is the largest whiskey consumer in the world. Once you understand that fact, then it is easier to understand why they might start producing their own whiskey too. Amrut Distilleries was founded back in 1948 in Bangalore and they initially produced rum, considering that India is also the world's second largest producer of sugarcane. In addition, most of the whiskey produced in India is molasses based, though that is primarily consumed within the country. During the 1970s, they started producing single malts, though only for blended whiskies. However, now at least a couple distilleries have started to bottle single malts on their own.

Amrut makes a number of different single malts, using Indian barley, grown at the base of the Himalayan Mountains, and which is only used for brewing/distillation. They do not use age statements and the intense heat of the region matures their whiskey much quicker than usual. It is said that 1 year of aging in Bangalore is equivalent to about 3 years in Scotland. In addition, and as expected, they lose plenty of whiskey to the angel's share, as much as 15% in a single year.

The Amrut Fusion Single Malt (about $65), which was released in 2011, is a "marriage" of 75% unpeated and 25% peated 100% barley whiskey which is then aged for another six to nine months in ex-bourbon barrels and bottled at 100 proof. I enjoyed this whiskey too, finding it light bodied with an interesting and complex blend of flavors, including caramel, intense spices, citrus and a touch of smoke. Smooth and easy drinking, this is another whiskey which should appeal to a wide audience. It makes me want to try the rest of the Amrut portfolio.

Finally, we end up in England, with the first and now oldest whiskey distillery in that country, with about 5 whiskey distilleries now in the country.  Established in 2008, the St. George's Distillery is the home of the English Whisky Company, a name change which was necessary for the U.S. market to avoid confusion with a similarly named company. They received initial distillation advice from the legendary Iain Henderson, formerly of Laphroaig, so they started from a strong place.

The English Whiskey Co. Peated Cask Strength ($100-$110), at 60.9% ABV, is made from estate grown barley, was aged for about 4-5 years, and uses peat from the mainland of Scotland rather than the islands. That is a very important difference as the peat lacks the salinity you find from the islands and in addition, the inland peat doesn't express as strongly. The peat level in this whiskey is 55 parts per million (ppm), which is actually higher than Laphroaig at 50ppm. However, the English whiskey tastes much less smoky than the Laphroaig though you wouldn't expect that to be the case. There are notes of bacon fat amidst the mild smokiness, as well as caramel and toffee notes, with mild citrus, nuttiness, and vanilla. A complex and intriguing taste, with a fuller body and a lengthy, satisfying finish.

The main takeaway is that delicious and interesting whiskey is now being made all over the world and you should take the opportunity to try some of these new whiskies. You might just find a new favorite. And as these new countries gain more knowledge and experience, their whiskey will only  evolve and improve. Don't be a whiskey snob and  be willing to expand your palate.
Posted by Richard Auffrey at 10:43 AM

Well Done Sir! Thanks for taking the time to write about our brands (Vicomte, Amrut and English Whiskey Co)

Thanks Richard for the great writeup. Amrut produces a number of other Single Malts all worth trying.