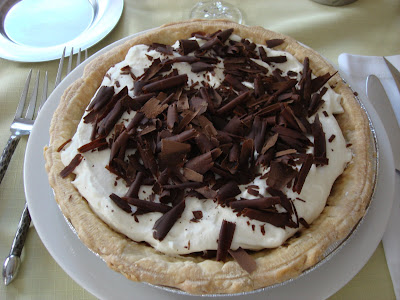 Pecan pie, Swedish apple pie, chocolate cream pie, pumpkin chocolate chip cookies, Snickerdoodles, salted caramel chocolates, and more. A seemingly endless choice of desserts for Thanksgiving of which I succeeded in at least tasting everything. And then collapsing into a comfy chair, a victim of food overload, yet quite happy and sated.

Though nearly everything was homemade, we did buy the chocolate cream pie ($18) from Chocolee Chocolates. I had never had their pies before so I did not know what to expect, except that I knew how well they did with their chocolates, beignets and truffles. But the pie looks homemade and anyone could have easily passed it off as their own. This was not the usual store bought chocolate cream pie but something far more enticing.

Most people could probably have made something similar to this pie if they had the time. The only significant difference would be the quality of chocolate used. This pie had a very rich chocolate flavor and you could tell the superior quality of the chocolate that had been used. This was not made from regular store-bought baking chocolate. To make something similar, you would have had to buy top end chocolate for your own pie, which would not have come cheap.

I very much enjoyed the pie and would recommend it to others seeking something homemade with a lush chocolate flavor. Unfortunately, the pies were only made for Thanksgiving. But, if enough people ask about the pies, maybe they could become a regular item at the store. Or at least something that can be special ordered.