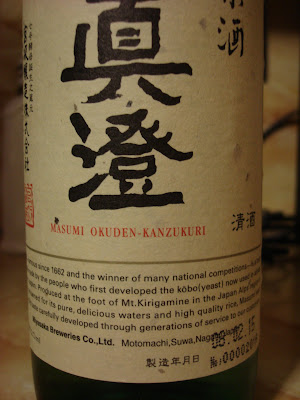 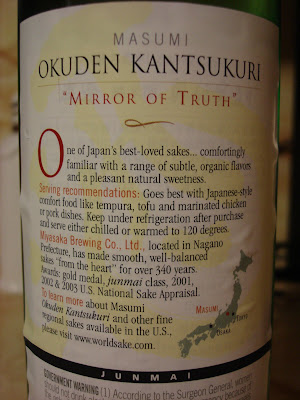 Last evening I had the pleasure of participating in a new Twitter Taste Live event, The Bloggers Take Over! This was similar to Open Mic night at the Improv, where a bunch of wine bloggers were able to take the stage and talk about wines they specifically chose for that night. It was a great evening and I will discuss it more in another post. But I wanted to highlight my own selection, the Masumi Okuden Kantsukuri "Mirror of Truth" Junmai Saké. I chose Saké as I hoped my passion for it might be infectious.
This was another purchase from Sakaya in New York City, and once again I was not let down. The Masumi Okuden Kantsukuri "Mirror of Truth" Junmai ($25.99/720ml) is from the Chubu region of the Nagano Prefecture. Masumi Brewery was founded in 1662 at the foot of the Kirigamine highlands in the Suwa Basin, the mountainous heart of the Japan "Alps." Masumi is a very important Sake brewery and is well known for developing Yeast #7, the most commonly used yeast for non-ginjo sake. This specific Sake is named for the Masumi no Kagami (Masumi Mirror), a national treasure set in the Suwa Taisha Shrine, one of the oldest shrines in Japan.
The rice, Hitogokochi, for this Saké was polished to 60% which would make it technically a Ginjo but the brewery decided to only label this as a Junmai. It has an alcohol content of 15% and a Saké Meter Value of +3, which means it tends to be more neutral, with a touch of dryness. This Saké had a clear color with a nose of subtle fruits and hints of steamed rice. It had a rich, creamy body with a hint of sweetness and subtle flavors of melon and banana. It was very smooth with a moderately long finish. I can see this Saké as pairing well with with richer foods like salmon, tuna, tempura, or even burgers.
This is a reasonably priced Saké and one which I would definitely recommend. I think it will appeal to both those new to Saké as well as those who already have a passion for it.
Kanpai!
Posted by Richard Auffrey at 6:01 AM

Hello- Did you drink this sake warmed?
I am doing a tasting with this sake and I am curious as to whether to get it up to 120 f.

Hi Domenic,
No,I didn't taste it warm, but I encourage you to experiment. Warm up a little of this Sake and see whether you enjoy it or not. Kanpai!