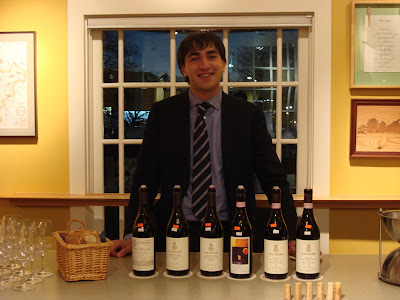 "Wine is about beauty." --Giuseppe Vajra

What a compelling sentiment and a statement that tells us so much about the philosophy behind this winery. This was not some sales pitch nor was it insincere. There was no doubt in my mind that it came from the heart.

Last week, I had the distinct pleasure to meet Giuseppe Vajra, the son of wine maker Aldo Vajra. Lower Falls Wine Co., in conjunction with Adonna Imports, hosted a special tasting of the organic wines of G.D. Vajra, an Italian producer in the Piemonte region. We had the opportunity to taste seven wines from their portfolio. I have enjoyed several of their wines before so very much looked forward to tasting some others.

Giuseppe impressed me with his passion for wine, clearly evident in all that he said and in his attitude. I think he makes an ardent advocate for the winery and should make a fine successor to his father. His brother is also involved in the winery, yet he prefers to work in the vineyards and seems very happy doing so. Giuseppe is more a front person for the winery, currently traveling to help promote their wines. His youth and energy are both positive assets. And the wines are excellent so he is promoting a fine product.

One of the most striking comments that Giuseppe made involved his father, Aldo. Aldo feels that wine should unify people at the table, it should bring family and friends together. It is more than a liquid, more than just alcohol. It is a social force that helps promote positive relationships. This is very much an Old World concept, where wine has long been an integral part of their cultures for thousands of years. And it is a concept that much of the New World could benefit from if they accepted it. Integrate wine into our lives and make it more than just an alcoholic drink. Let it bring us together, creating closer ties with our relatives and friends, as well as helping to form new friendships.

The first wine of the tasting was the 2006 Dolcetto d’Alba Coste & Fossati ($25.99), a blend from two different vineyards where the vines are around 30 years old. The wine sees only a little bit of old oak because they want to keep the fruit flavors strong. Though this wine could age for a time, it is recommended that you drink it within the first five years. It is a very aromatic wine with lush berry smells. It is a very fruit forward wine, lots of cherry and plum, with moderate tannins that best goes with food. A fresh and vibrant wine that is sure to please and which I very much enjoyed. I should note that all of the Vajra wines are small production.

The 2005 Barbera d’Alba Superiore ($35.99) is from a single vineyard that was planted around 1949. These old vines give less variation each vintage that regular vines. The grapes are hand harvested and undergo a careful selection process to ensure they only use the best grapes. I loved the blueberry nose of this wine, such rich aromatics. On the palate, the blueberry flavors were prominent, as well as some ripe plum and blackberry. There is only the merest hint of spice. It was a bit tannic, a tad muscular, and probably needs about five years of cellaring though with the right food you could drink it now. It does have a pleasing, long finish and I am intrigued at how it will develop in time.

We also got to compare the 2004 Barbera d’Alba Superiore ($33.99), which is from what many consider an excellent vintage. The nose of this wine also had blueberry notes but with some dried cherry smells as well. It was a smoother wine, with milder tannins that the 2005 vintage. The fruit flavors, dried cherry and blueberry, were bright and it had a lingering finish that you did not want to end. I think this was a more approachable wine that could easily be drank now without any cellaring.

The 2004 Barolo Albe ($49.99) is a classic-style cuvee made from 20 year old vines in the La Volta, Coste di Vergne and Fossati vineyards. This wine has a light red color and a compelling nose of tobacco, dried cherry and a bit of earthiness. It has dusty, cherry flavors and moderate tannins with a fairly long finish. It seems fairly approachable now though I am sure it will develop even more with cellaring. There is also an interesting story about this wine's label.
If you look at the picture above, you can see that all of the wines but one have similar labels. The odd label has bright colors and geometric shapes, and seems to resemble a stained glass window. Well, the Vajra family made friends with a local Franciscan monk who was both an artist and architect. The monk designed the stained glass windows in the Vajra wine cellar and they eventually persuaded him to design the wine label as well. Giuseppe remembers that when he was younger, the monk told him to never accept mediocrity and that sentiment has remained with Giuseppe ever since.
The 2003 Barolo Bricco delle Viole ($57.99) is from the Bricco delle Viole vineyard was planted by Giuseppe’s great-grandfather in 1949. I found it more tannic and austere than the Albe Barolo. It also had more floral notes but I think this wine might require more cellaring. I just did not find it particularly compelling.
The 2004 Barolo Bricco delle Viole ($69.99) though impressed me much more than the 2003 vintage. I found this wine to have more prominent fruit flavors than the 2003 though the fruit flavors, blueberry, black cherry and raspberry, were still more subtle. There were also notes of spice, a touch of leather and some vanilla. This was a more elegant and complex wine, with a very satisfying and lengthy finish. It was well balanced and absolutely delicious. Though impressive now, I suspect it will only become even better over time. This is a wine I would highly recommend.
The final wine was the 2007 Moscato D'Asti ($19.99), which I have had before and previously thought was exceptional. At this tasting, my thoughts about it did not change at all. It has an appealing fruity nose with a nice taste of citrus. It is a very refreshing wine with only a slight bit of sweetness and a light effervescence. It would make a nice apertif or a palate cleanser. This has to be one of my favorite Moscatos and you definitely should check this out. It would be great for Thanksgiving, or any holiday.
Overall, a delicious tasting and I strongly recommend you check out the wines of G.D. Vajra!
Posted by Richard Auffrey at 6:00 AM