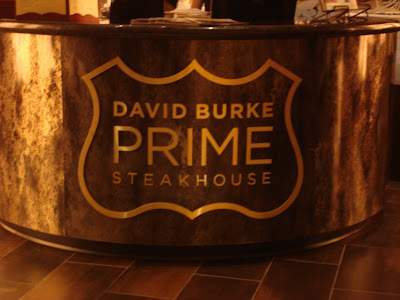 As a devout carnivore, steakhouses appeal to my innermost desires. These temples to meat satisfy my most primal urges. I know I am not alone. I know there are plenty of other carnivores out there who yearn for a hearty steak.

Yet not all steakhouses are equal. They differ from each other in so many ways. So it is always with a little trepidation that I visit a new steakhouse. How will their beef taste? Will it be cooked properly? Will it meet my standards? How will it compare to my favorite steakhouses?

I recently visited David Burke Prime Steakhouse located at the Foxwoods Casino in Connecticut. Chef David Burke opened this steakhouse back in July 2008 and he owns other restaurants in New York, New Jersey, Las Vegas, and Chicago. Burke trained at the Culinary Institute of America and also spent time working for various chefs in France. He is very well-known and respected. I was told he routinely stops by the Connecticut location to ensure matters are running properly and according to his standards. That certainly is encouraging. 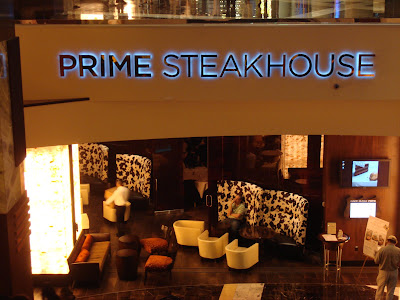 Initially, I checked out the restaurant website for more information. It noted that the steakhouse is fairly large, about 13,000-square-feet, and able to seat around 300 people. This includes a 28-seat bar and a 1,700-square-foot private banquet area, accommodating up to 100 people. There is also a 35-feet tall wine tower, extending up three stories. In addition, the restaurant has a specially designed aging room for its beef. All of that sounded interesting to me.

I was even further intrigued when I checked out their dinner menu online. The appetizers, salads, sides and meat selections presented some creative and delicious-sounding choices. There was much that appealed to me so I was excited about checking out the restaurant. 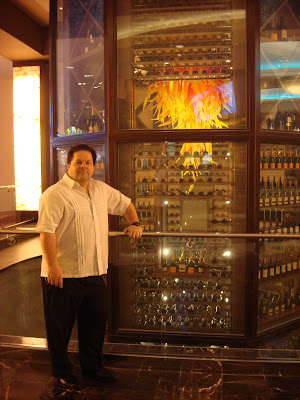 While walking through the Foxwoods Casino, approaching the restaurant, I first noticed their lofty wine tower. Above, you can see me standing outside the top third of the wine tower. Inside the tower, you can see a yellowish decoration that resembles flames which is at the top of the tower. I was later fortunate enough to get a look inside of the tower as well. 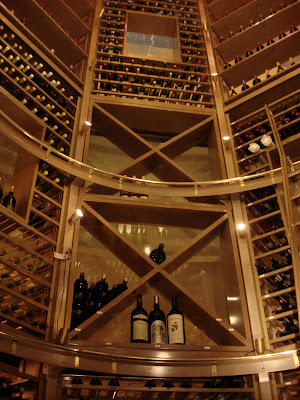 Actually only about one third of the wine tower is used for wine storage, the rest being merely decorative. There is a ladder inside the tower, and the top of the ladder basically denotes the end of their wine storage area. They have approximately 400 active bottles at any one time. They store some other wines elsewhere, including keeping their Champagnes chilled. 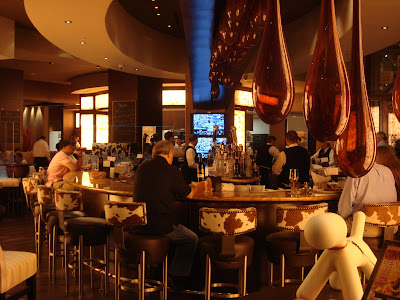 Above, you can see their 28-seat bar which is located near the front of the restaurant. Note the "cowhide" on the backs of the stools. This "cowhide" is also used to cover other chairs throughout the restaurant.

Overall, I found the decor somewhat eclectic, different areas of the restaurant decorated differently. Yet somehow it all seemed to work well together. It seemed elegant but homey, stylish and fun. The decor impressed me and it would alternatively cater to a business dinner, an intimate date, an after-work party and much more. 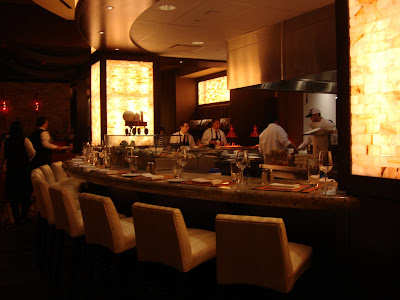 You can even sit at the action kitchen, where cooks prepare appetizers and raw bar items. 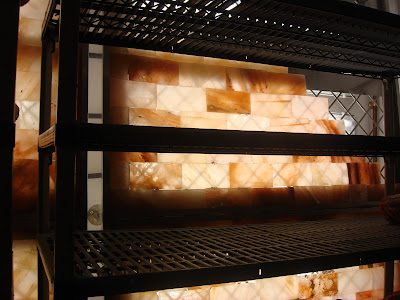 Maybe the most intriguing aspect of the restaurant is their dry aging room and I got to visit this area. On the left wall of this rectangular meat locker, there are blocks of imported pink Himalayan rock salt. This salt is harvested from ancient sea salt deposits in the Himalayan Mountains. One of the alleged effects of this salt is to help prevent a rancid odor from the beef. I don't know if the salt was responsible or not, but the aging room had an enticing beefy smell. The aroma did not offend me in the least. 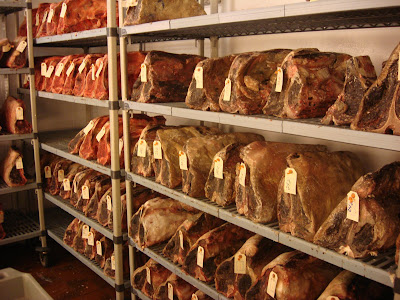 What carnivore could not be ecstatic to be surrounded by hundreds, if not thousands, of pounds of beef. Each slab of meat is tagged with its date and weight, though they lose up to 20% of their weight from shrinkage and what will need to be trimmed. The meat typically spends 28-75 days in this aging room.

Why dry age the beef? There are two basic processes that occur during dry aging which enhance the beef. First, moisture is evaporated from the muscle which creates a greater concentration of flavor and taste. Second, the beef’s natural enzymes break down the connective tissue in the muscle, making it more tender. The longer the beef is aged, the richer and stronger the flavor of the beef.

That richer flavor though does not appeal to everyone. Some feel that the meat acquires a gamey taste which they dislike. It might be more of an acquired taste, where you need to get acclimated to the flavor over time. I was told that many repeat customers have done just that, starting with the youngest aged beef and over repeat visits, slowly trying older beef. Currently on their menu, their oldest aged steak is a 55-day ribeye.

Though the restaurant website states that all of their meat comes from Creekstone Farms in Kentucky, that is not accurate. Creekstone does not always have all of the meat available that the restaurant needs, so they must sometimes purchase their beef elsewhere, such as from Buckhead Beef. The restaurant's meat buyer is actually Chef Burke's brother. He has a certain set of strict specifications, such as the amount of marbling, that all meat he purchases must meet.

Tomorrow, I will review the dinner I ate though I will tell you it was an excellent meal.

(Disclosure: Please be advised that I received a complimentary dinner and hotel room. But, there were no conditions attached and whether I reviewed the restaurant or not was fully at my discretion. In addition, if I chose to write a review, anything I wrote would also be at my sole discretion. This experience allowed me to gain some behind-the-scenes information that I could not have gained as a normal customer.)
Posted by Richard Auffrey at 6:00 AM