No matter how impressive a restaurant looks, it is the food that ultimately matters the most. In that regard, David Burke Prime Steakhouse also delivers. It is a worthy steakhouse destination which is sure to please the most discerning of carnivores.

Before checking the food menu, you might want to start with a drink. You could choose a martini or other cocktail ($12-$16) or select one of their 25 wines by the glass ($8-$15). The list of wines by the bottle is diverse, including wines of New York from very good wineries such as Channing Daughters and Shinn Estates. Prices generally start in the $40s with many options available for under $100. Markup seems to be about twice or lower of the usual retail. The list was not as pricey as expected, making it one of the more reasonable steakhouse lists I have seen.

I decided on the 2005 Domaine de Villeneuve "Vieilles Vignes" Chateauneuf-du-Pape ($90), a biodynamic wine that is a blend of 40-100 year old vines of Grenache (70%), Mourvèdre (16%), Syrah (8%), Cinsault (8%) and Clairette (2%). This was a top notch wine, with fine berry flavors, restrained tannins, lots of spice and a touch of earthiness. Plenty of complexity and a lengthy, satisfying finish. I think it was a complimentary pairing for my steak, as well as with the appetizers, especially as it was not an overpowering wine. It had some strength but also finesse.

As for the food menu, there are plenty of traditional steakhouse choices as well as some more innovative dishes. Appetizers ($10-$18) present intriguing choices, such as Pretzel Crusted Crab Cake and Kung Pao Lobster. Soups & Salads ($10-$14) range from Connecticut Corn & Clam Chowder to Warm Asparagus & Goat Cheese Salad. They have a full raw bar including oysters, lobster, clams, crab and shrimp. For Entrees, there are numerous steaks, from filets to ribeyes ($32-$58), of various days of dry aging. If you don't want steak, there are other options including lamb, veal, chicken, tuna, lobster and more. Finally, there is a selection of about ten Sides ($7) to accompany your entree. Overall, pricing seems comparable to other high-end steakhouses. 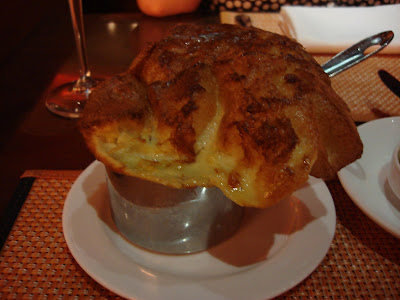 Your meal begins with a fresh popover, which certainly started me off in a good mood. I know that some consider popovers old-fashioned, but I still love them. That crisp, flaky exterior concealing a delicious and warm, eggy interior. Though the popover was excellent, my only minor criticism was that the balls of butter were too cold and hard for my tastes, which was the subject of one of my previous rants. But that is more just a personal preference. 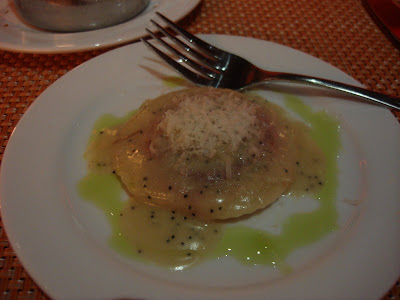 We then received an Amuse Bouche, a Beet Mousse Ravioli. I must confess that I generally dislike beets so I was pleasantly surprised when I very much enjoyed this ravioli. The creamy mousse had a touch of sweetness, and the ravioli was cooked just right. I probably could have eaten an entire place of these raviolis and been very happy. 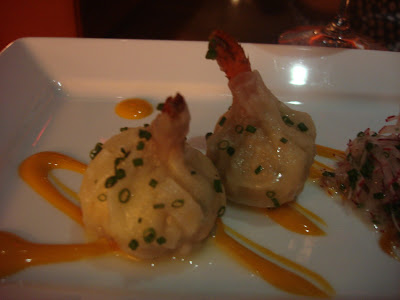 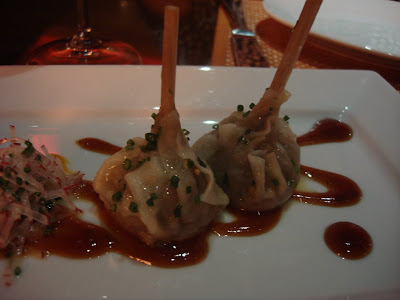 Our first appetizer was the Surf & Turf Dumplings ($14). The above top picture shows the Surf dumplings, filled with lobster, lemon, chive and butter. It seemed more like a lobster mousse inside the dumpling, with a rich lobster flavor. The Turf dumplings, the above lower picture, were filled with barbecued & cheddar short ribs. These were superb, filled with plenty of tender and flavorful meat, and my favorite of the two. 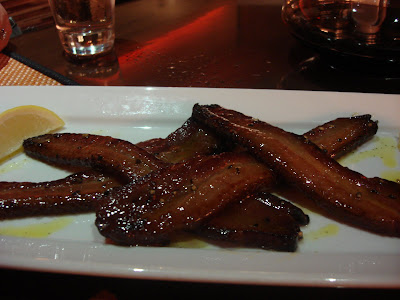 What carnivore can resist bacon? The Double-Cut Maple Pepper Bacon Strips ($10) present four, long, thick slices of bacon. Though thicker than usual bacon, these were still extremely tender and almost melted in your mouth. The taste was exceptional, such a enticing melange of sweet, spice, and smoke. None of the flavors overpowered any other, instead they existed in a culinary harmony. I would highly recommend this dish to any bacon lover. 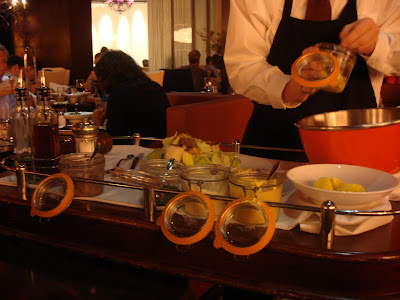 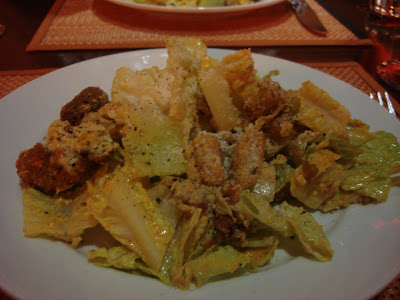 The Classic Caesar Salad ($12) is prepared tableside, which you can see in the above top photo. The server prepares the dressing, asking you whether there are any ingredients (such as anchovy paste, mustard, or chives) which you may not want in your dressing. The fresh romaine lettuce, primarily hearts, is tossed with some hard croutons. We had the added Crab Cake Croutons ($5) with our salad. I very much enjoyed the salad, and the dressing really enhanced the romaine. The Crab Cake croutons, which were actually gold-ball size, were a fantastic addition, and highly recommended. They were served warm and filled with plenty of sweet crab. 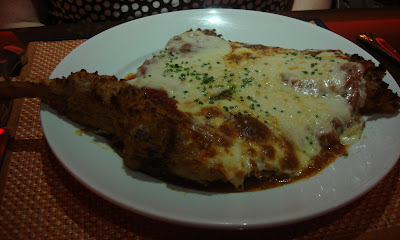 This photo does not do justice to the size of this dish! The Veal Chop "Parm" ($34) was a veal chop which had been hammered down flat and covered with tomato fondue and Fontina cheese. It looked huge on the plate and there was certainly lots of meat. The veal was extremely tender, one of the best veals I have tasted in some time. The flavorful fondue and plentiful, melted Fontina enhanced the veal. You might be wary finding an Italian dish at a steakhouse, but this is well worth ordering. As someone like me who really loves veal, this was a very impressive entree. 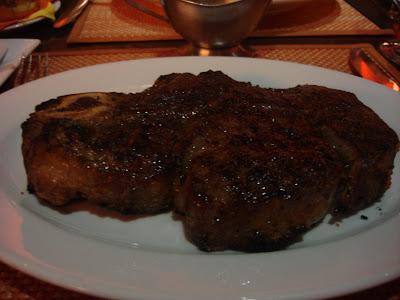 I selected the 55 day Ribeye ($58), cooked rare, with a side of Roast Garlic Marsala sauce. This is the oldest dry aged steak available on their menu. It was a good-sized piece of beef, very tender, and incredibly flavorful. It had a very intense beefy taste that made me savor each and every bite. I did not think it was gamey at all, though I suspect some people might disagree, especially if they are not used to dry aged beef. To me though, this was a heavenly steak. Though I enjoyed the sauce, I ended up using very little of it because the steak itself had so much rich taste that the sauce was unnecessary. This ribeye fulfilled all its promise, showing the efficacy and benefits of dry aging. 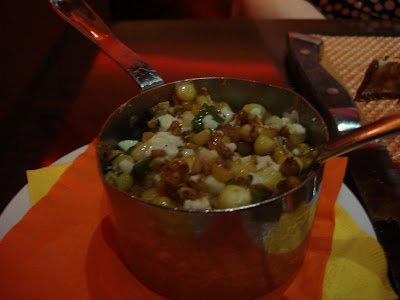 We had two Sides, the first being the Roasted Corn with chipotle and cotija cheese. I actually was expecting that the corn would be on the cob, similar to what is served at Toro. Instead, you just need a fork to savor the mixture, which I found quite delicious, especially with the plentiful cheese. Cotija is an interesting Mexican cheese which is starting to show up on a number of restaurant menus. 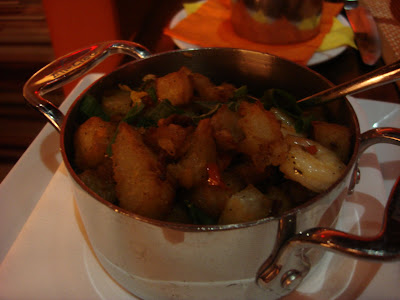 The second Side, the Shrimp Home Fries were fine but not impressive. The fried potatoes were nice and crispy on the outside and there were a number of small shrimp in the dish. But it just seemed ordinary and I had been expecting much more. 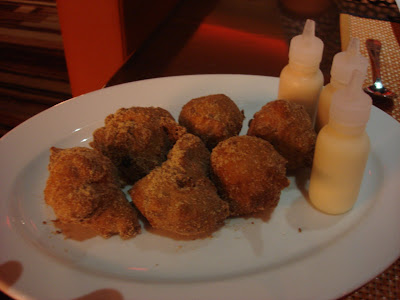 Despite all of the food we had already eaten, I still had a little room left for dessert. Especially when I saw the Drunken Peach Donuts ($9) on the menu. These were everything I hoped they would be, light, tasty and with tiny pieces of peach. I am a big donut fan and these certainly satisfied. The donuts came with three different sauces. You insert the nozzle of one of the plastic bottles into the donut and filled it with the flavor of your choice, my favorite being the vanilla. 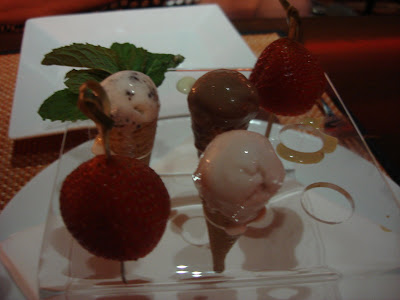 The restaurant sent out two more desserts for us to try, the first being five Mini Ice Cream Cones, a fun treat which kids of all ages would enjoy. There were five different ice cream flavors and all were creamy and good. 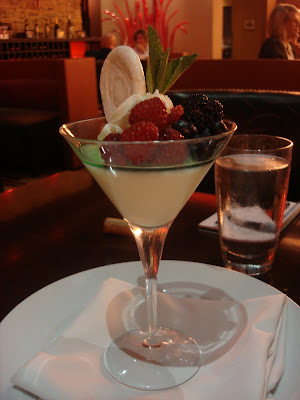 A new addition to their dessert menu is the Lemon Panna Cotta with a thin layer of mint jelly atop it, and fresh berries. Visually, a very appealing dish, it was also quite tasty, with a very creamy panna cotta blending well with the mint and berry flavors.
Service was excellent. I did watch the servers at the other tables and everyone else seemed to be getting very good service too. I did not notice any service problems. The servers work as a team and work well together. They were pleasant, accomodating and attentive.
Overall, my experience here was impressive. Delicious and plentiful food, an excellent wine, top notch service, a pleasant ambiance. I would certainly place this restaurant with my top steakhouses and I highly recommend you dine here.
David Burke Prime Steakhouse
39 Norwich-Westerly Road
Mashantucket, CT
Phone: 860-312-8753

(Disclosure: Please be advised that I received a complimentary dinner and hotel room. But, there were no conditions attached and whether I reviewed the restaurant or not was fully at my discretion. In addition, if I chose to write a review, anything I wrote would also be at my sole discretion. This experience allowed me to gain some behind-the-scenes information that I could not have gained as a normal customer.)
Posted by Richard Auffrey at 12:00 PM

It certainly was and I will definitely return the next time I visit Foxwoods.