Box Wines? I See The Future 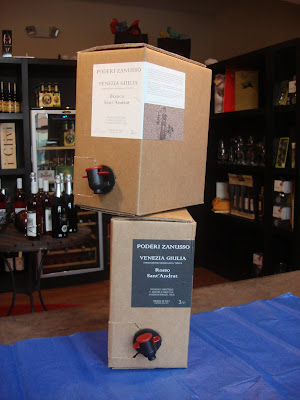 Box wines generally have a poor reputation in many circles. It is often thought only cheap, mass produced wines are placed into boxes and that may be largely true. I have not previously had any box wines that excited me. Boutique wine stores rarely, if ever, stock box wines.
So I was amazed when Samanta of Wine••Sense, a boutique wine store in Andover, advertised that she was holding a tasting of two box wines. Samanta has very discerning tastes, and is very particular in which wines she will stock in her small shop. So, if she was now selling box wines, there had to be a very good reason for such. That intrigued me so I had to attend the tasting.
I also learned that the box wines were being imported and distributed by Adonna Imports, one of my favorite distributors of small, artisan Italian wine producers. They certainly would not import the usual box wines. This had to be something special. Plus, these box wines would be sold in other top wine stores like Lower Falls Wine Co. and the Wine Bottega.
There are advantages to box wines. First, once you open the wine, if properly stored, the wine will keep fresh for several weeks. Second, the packaging is supposed to be more environmentally friendly in a few ways. For example, it weighs less than glass bottles so transportation expenses and fuel expenditures are less.
What is so special about these particular box wines? They are produced by Ferdinando and Mario Zanusso of I Clivi, who make organic wines from the Friuli region of Italy. I previously met both Ferdinando and Mario at tastings in May 2008 and March 2009, tasting much of their portfolio. They produce only about 2000 cases each year, and make some excellent and delicious wines. Check out my previous posts for reviews of their wines and more about their wine making philosophy.
Why did this small producer decide to make box wines? When Mario Zanusso was in the U.S. this past spring, he asked Jeannie and Eileen of Adonna Imports if they would be interested in selling box wines. Apparently, after carefully choosing grapes for their wines, Ferdinando and Mario used to sell the rest of their grapes in bulk to other wineries. Instead of selling all of those grapes, they decided to use some to make box wines, using a different label. The new label is Sant' Andrat, the name of the commune where the Galea and Brazen vineyards are located.
They have begun with two different box wines: 2008 Poderi Zanusso Sant' Andrat Bianco and 2008 Poderi Zanusso Sant' Andrat Rosso. As you can see from the photo at the top of the post, the boxes are very plain cardboard with a label. The boxes certainly won't impress your guests. But the boxes were intended to be that way, to indicate the wines are natural. Each box contains three liters of wine, the equivalent of four regular 750ml bottles, and costs $28.99. That breaks down to about $7.25 per bottle, certainly inexpensive.
The Bianco is made from 100% Tocai Friuliano, not the type of grape you might normally suspect to be in a box wine. But it is a top white grape in the Friuli region, and I think it makes for an interesting and delicious wine. This Bianco had a very aromatic and floral nose with an intriguing taste of peach, melon, spice and some mineral notes. It was crisp, smooth and had a fairly long finish. I really enjoyed this wine and think it is an excellent value. It may not be as complex as their other wines, but it certainly has much more complexity than most other wines at this price point.
The Rosso is made from 100% Merlot, though it is not your typical Merlot wine. The nose was rather muted and the red fruit flavors were also restrained. There were hints of spice and leather, with moderate tannins and a long finish. It almost seemed to me more like a young Cabernet. This wine would be best paired with food rather than on its own. Though I liked this wine I did prefer the Bianco, though there were others at the tasting that preferred the Rosso.

I bought several of these box wines and Wine••Sense is probably sold out now. But Adonna Imports will be getting another shipment around the end of September and hope to keep it in stock through the holiday season. Look past the box and embrace these quality, organic Italian wines. I highly recommend them and consider them an excellent value. Hopefully, more artisan producers will follow the lead of the Zanussos and produce such quality box wines. I think I see the future of wine.
Posted by Richard Auffrey at 6:00 AM

We over at The Second Glass agree! Box wines are totally the way of the future, er, as long as people fill them with good wine! Boxed wine stays fresh MUCH longer and is also much more environmentally friendly when you are talking shipping wine all over etc.

Thanks for the great review. I have always felt that box wines are one of those things that are great in concept but fall short on execution. Your post intrigues me and I'm going to have to try these wines!

Thanks for your interesting post: I've wrote about it on Twitter and in Italy it's started a discussion about box wines...I know very well I Clivi, very good organic wines!
Ciao!

Hi Morgan:
Thanks for your comment. I agree that more box wines need to be filled with excellent wine. That is the best way for them to spread.

Hi Kristin:
I hope you get to try these wines and if you do, please return and tell me what you thought.

Hi Vittorio:
Glad to see my post has spurred some discussion in Italy. How has the discussion gone? Positive for box wines? Thanks