"Hunger brings not alone suffering and sorrow, but fear and terror. He carries disorder and the paralysis of government, and even its downfall. He is more destructive than armies, not only in human life but in morals. All of the values of right living melt before his invasions, and every gain of civilization crumbles. But we can save these people from the worst, if we will."
(Herbert Hoover)

I know you have seen those commercials with the starving children in Africa, where they ask for donations to feed the children. You are also probably aware of other efforts to raise money to buy food for the starving in Africa. Frankly, such efforts are not really that helpful. You might be helping some of the symptoms, but you are not curing the disease. So how do you cure the disease?

I found those solutions in a fascinating yet disturbing book which you definitely should read to better understand the entire, complex picture of starvation in Africa. 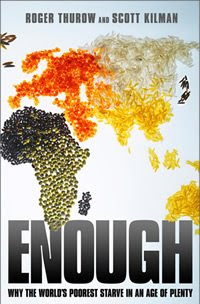 Enough: Why The World's Poorest Starve in an Age of Plenty by Roger Thurow and Scott Kilman (Public Affairs, June 2009, $27.95) examines the reasons behind the famine in Africa, offering solutions to this dire problem. Roger and Scott both write for the Wall Street Journal and have written previous stores about these problems in Africa.

About forty years ago, the Green Revolution began, introducing scientific breakthroughs in agriculture which helped prevent famine in Asia and Latin America. Yet Africa did not fare as well and numerous factors contributed to that failure. To save the millions of lives that die in Africa each year due to starvation, action is urgently needed. And different actions than much that is currently done.

The necessary actions generally center on a single idea. This can best be exemplified in a common saying: "Give a man a fish and he will eat for a day. Teach a man to fish and he will eat for the rest of his life." Far too often, all we do is help feed Africa, spending money on buying them food. So, we are forced to continue to feed them, year after year, in a vicious cycle with no end in sight.

As one example, consider Ethiopia in 2003. In that year, the U.S. provided approximately $500 million in grain to feed the starving people yet the U.S. only provided them about $5 million for agricultural develpment. If more money had been allocated to agricultural development, Ethiopia's problems would be far less.

So stop feeding Africa! Instead, teach them better ways to grow and produce their own food. Give them the tools and resources to help themselves.
Posted by Richard Auffrey at 6:00 AM

It is always frustrating when money spent on good deeds either gets spent the wrong way or is misused by the recipient. The problems in Africa don't stop there, with all the tribal wars and conflicts that hinder any process of peace and restoration. Despite this my girlfriend and I have donated to Heifer International, whose policy is akin to 'teach a man to fish'. One way they do this is to provide various livestock to a village or group so they can raise them and grow a sustainable herd. Quite frankly I don't know how successful they are, but I believe their method to be better than throwing cash at a problem.
http://www.heifer.org/#

Thanks Richard for your comments. That certainly sounds like a better solution than many others. If you learn any more about their effectiveness, please come back to tell me. Thanks.