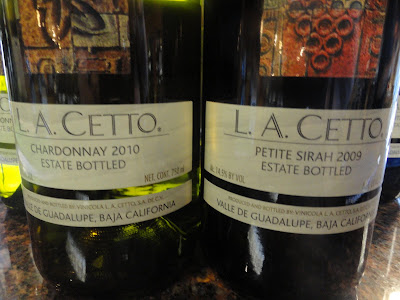 Earlier this week, I wrote about two exciting wines from Mexico that I tasted at The Painted Burro, a Mexican restaurant in Davis Square, Somerville. On the same day of my post, I received an email about a tasting of two more Mexican wines which was taking place that day at Pairings, a wine store in Winchester. So I had to attend the tasting, to see what else Mexico has to offer.

The two Mexican wines at Pairings were also from the L.A. Cetto Winery, which is one of the only Mexican producers currently available in Massachusetts. You can check my prior post for some basic information about the winery. The latest issue of Saveur (Agu/Sept 2012) is their Mexico issue and there is a brief article on wines from the Baja region. It notes that in 1524, Hernan Cortes, planted grape vines, making Mexico the oldest wine region in the Americas.

At Pairings, they poured two wines, a Chardonnay and a Petite Sirah, both priced at $10.99, though the Petite Sirah is on sale through the rest of September for only $8.79.

The 2010 L.A. Cetto Chardonnay is produced from 100% Chardonnay, has an alcohol content of 12.5%, and does not see any aging in oak. With a light golden color, its pleasant aroma of tropical fruits and citrus will entice. On the palate, it is crisp and clean, with delicious flavors of apple, pear, lemon & guava, with a touch of minerality. An easy drinking wine, this has good complexity for its price point and definitely is recommended for an unoaked Chardonnay. Drink it with some seafood or a light chicken dish.

The 2009 L.A. Cetto Petite Sirah is produced from 100% Petite Sirah, has an alcohol content of 14.5%, and spends about 6 months in French oak. This wine had a medium red color, not opaque like many other Petite Sirah wines I have taste previously. On the nose, alluring black cherry and floral elements dominate. It is a big wine in your mouth and the tannins are strong, but there is good restraint as well. It won't overwhelm you, but instead will please your palate with its delicious black fruits, spicy notes and hints of floral elements, as well as its fairly long and satisfying finish. A hearty wine, this would go well with hearty dishes, from pasta to beef. It also gets my recommendation.

I also want to give you two more reasons to check out Pairings. First, they are still carrying at least a dozen Rosé wines, including the superb 2000 Lopez de Heredia Rosado ($31.99). I don't know how long they will last, but this is a great time to stock up on Rosé for the winter as it is a great food wine year round. Second, they also currently carry the Estenas P.G. Bobal ($13.99), a great wine at that price point which is sure to end up on my year-end Favorites list. Grab it and you won't be disappointed.
Posted by Richard Auffrey at 4:00 AM