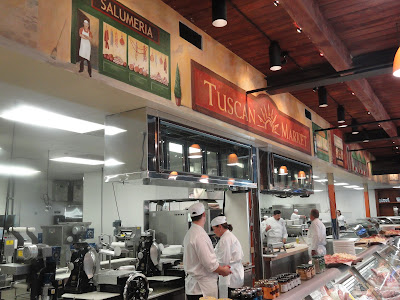 Many of us would love to be able to easily purchase fresh baked bread, fresh local produce, artisan cheese, meats, seafood, fresh pasta, wine, and homemade desserts. We might be able to do so by spending a few hours wandering through the North End, stopping at numerous stores to purchase each individual item. But it would be far more convenient, and quicker, if all of those items could be found in the same location. For example, consider a place like Eataly in New York City.

We can't just pop down to Eataly every week but we will soon have a much closer option, the Tuscan Market in Salem, New Hampshire. This market will open in October and is located next to the Tuscan Kitchen restaurant. This past Sunday, I attended a media pre-opening event at the Tuscan Market and I see great potential there. 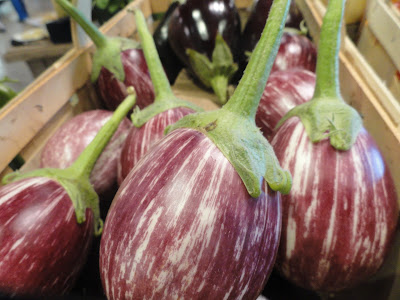 The Tuscan Market and Tuscan Kitchen are owned by Joe Faro, who has over 25 years in the food industry, and whose parents had owned a bakery in Haverhill. In college, Joe started his own small business, Joseph's Gourmet Pasta, which grew into a nationwide business and he eventually was able to sell it in 2006 to Nestle for over $60 million. Joe, who lives in Salem, decided to start an Italian restaurant and in November 2010, the Tuscan Kitchen opened its doors. Much of the foods are created on site and that which is not is usually imported from Italy.

Joe apparently has plenty of energy as he is now preparing to open the Tuscan Market, a large artisanal market, which will be a one-stop shopping spot for Italian food and ingredients, as well as other quality items. Many of the foods will be prepared on premises while others will be imported from Italy. In addition, there will be a 65-seat café where you can grab a bite, from pizza to pasta. The market was not complete when we checked it out, but there was enough there to gain a proper sense of its potential. Plus, for the first hour of our tour, we were able to sample a variety of items they will sell, including breads, cheeses, meats, wine, pizza, flatbreads and more. 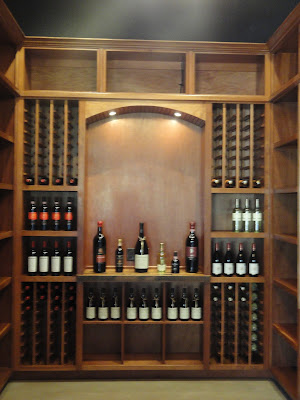 I spoke to Joe Comforti, the Wine Director of Tuscan Kitchen, about their plans for wine at the Market. They will be carrying about 275 different wines, 85% which will be from Italy and the vast majority will also be red wines. Their specialty will be the wines of Tuscany, from Chianti to Brunello. They will be installing a cooler to hold their white wines so you can pick up a chilled white. Wine tastings will be held weekly, and they will give their guests real wine glasses and not some tiny plastic cup. Wine classes will also be held there in the future. 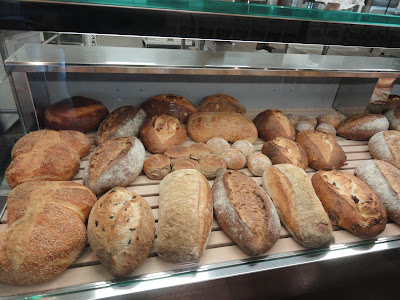 The breads! All of the breads are made on premises and they will be making about 12 different types. We got to taste several of the breads and they were amazing, especially the garlic bread. Great crusty exterior with a fresh, soft center and big cloves of garlic. Dip your bread in some real olive oil and you will be very happy. 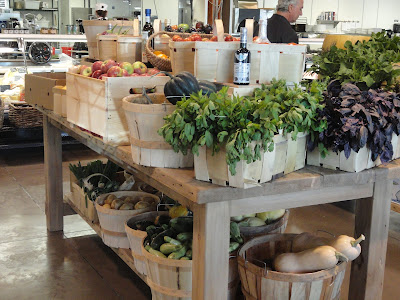 They will carry plenty of fresh produce, lots of local fruits and vegetables. They obtain some of their produce from Smolak Farms in Andover but the big secret is that about half of their produce comes from a farm owned by Joe's father! They will also be constructing a greenhouse on their roof so they can grow their own. 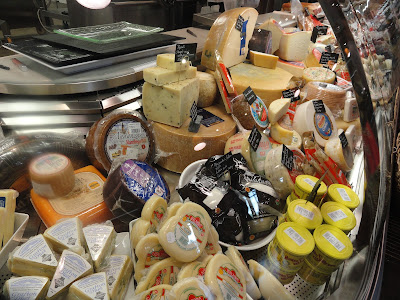 They will carry a wide variety of cheeses, plenty from Italy but cheeses from a number of other countries as well, such as France and Spain. There are window cases in the front of the store where they keep large rounds of Parmigiano Reggiano. We sampled a number of cheeses, from the soft and compelling Cruculo to the umami-rich Parmigiano. 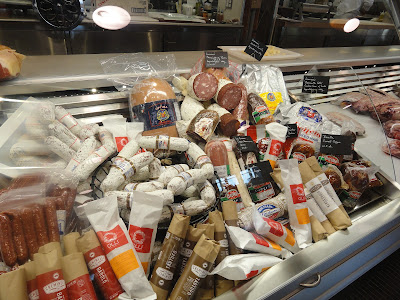 Besides imported sausages, hams, pancetta and more, they will be making some of their own charcuterie. 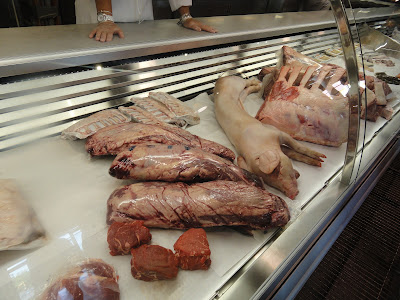 Over the years, Joe Faro has established many close connections to purveyors and thus he is able to buy many of his meats and seafoods directly, rather than go through third parties. They butcher their own meats, and much of their meat is Prime, with a small proportion being Choice. It is not organic or grass fed though they will dry age some of their meat on premises in special glass case above their meat counter. 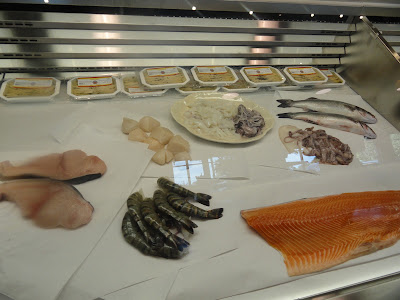 Their seafood, which is all supposed to be sustainable, usually is bought directly off the boats in Boston. Joe's prior connections allows him to be able to obtain very fresh, high quality seafood. 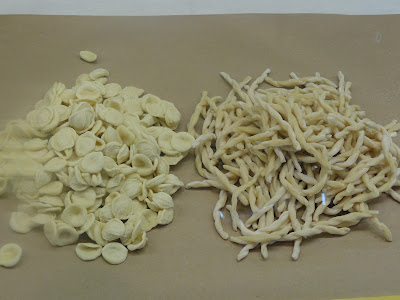 They produce numerous fresh pastas, from fusilli to ravioli, and may also offer some gluten free varieties. 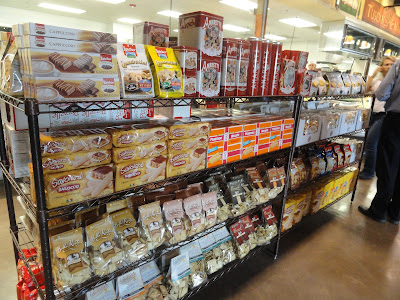 You will find a variety of imported pre-packaged foods, including olive oils, balsamic, cookies, crackers, pasta, and much more. 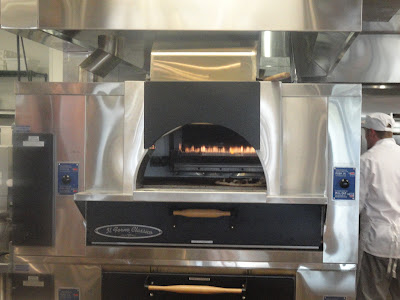 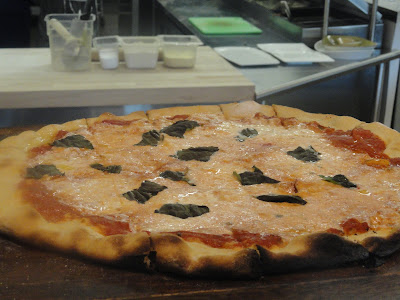 You will be able to purchase plenty of prepared foods, including pizzas, paninis, pastas and sauces, and plenty more. The pizza was more of a thin crust, with a tasty pizza sauce and lots of gooey cheese. This is the type of pizza I very much enjoy. 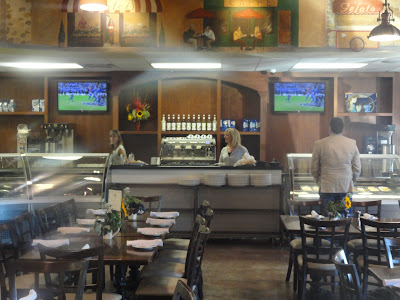 Within the Market is a cafe where you can sit and have a bite, or just a coffee or espresso. Besides the tables and chairs, there are some comfy leather chairs in one corner too. While eating, you can watch one of the flat screen televisions. During warm weather, they will also have an outside patio. 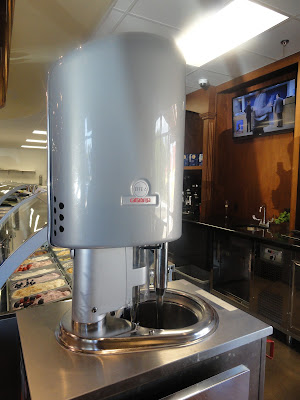 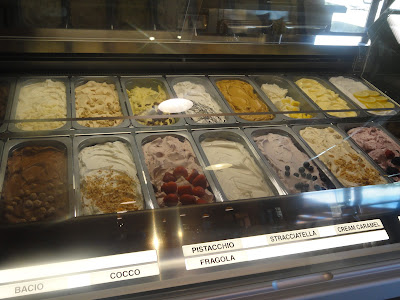 At the cafe, they have a homemade gelato machine imported from Italy (pictured above) and they will about 24 different flavors of gelato. I tasted a few different flavors, including their caramel and chocolate, and they were amazing, bursting with creamy flavors. Other people who tasted some of the other flavors were equally as impressed. 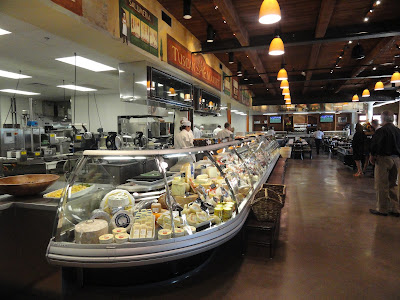 In the future, Corporate Executive Chef Edward Payne will also lead cooking classes here at their Scuola Culinaria. The Tuscan Market will be open seven days a week; Monday to Thursday 7am-7pm, Friday to Saturday 7am-9pm and Sunday 7am-5pm. 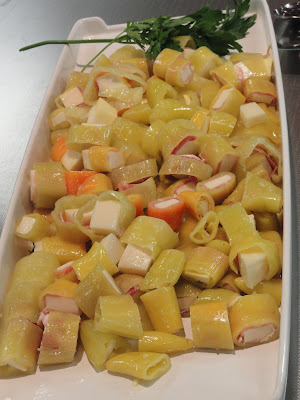 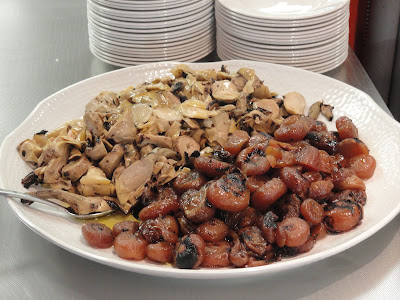 During the first hour of our tour, there were plenty of foods to nibble on, such as the two dishes above. But you couldn't fill up too much as we were also being provided a sit-down meal, to showcase the foods that would be available in the market. 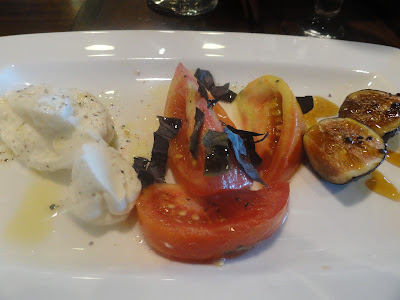 The meal began with a dish of Smolak Farm's heirloom tomatoes, caramelized figs, house made burrata, local truffle honey, and purple basil. Great fresh ingredients, full of flavor and the creamy burrata was blissful. A simple but compelling dish, showing the power of fresh ingredients. 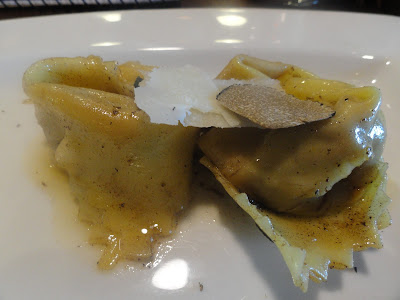 The Cappellaci of roasted butternut squash and duck brasato with a simple sage sauce, shaved black summer truffle, and parmigianto reggiano was also impressive. Lots of creamy sweetness from the cappellaci filling, excellent and perfectly cooked pasta and just the right touch of spice. The truffle and parmigiano added an additional umami element to the dish and I could have easily devoured several more. 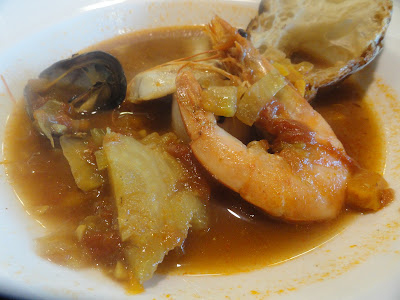 The next course was a Cacciucco Di Pesce, an Italian Shellfish Stew, with grilled head on prawn, pan seared branzino, and mussels in a fennel shellfish brodo with grilled ciabatta. A large prawn and flaky branzino did well in the savory broth, which was also great for dipping the ciabatta. 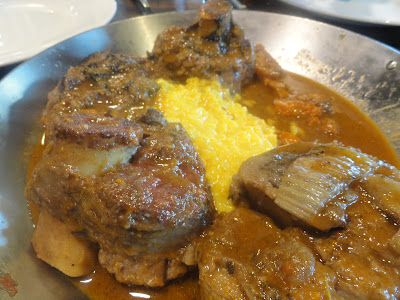 The final savory dish was the Tuscan Kitchen Osso Buco, a slow braised veak shank, crusted in fresh herb gremolata, with a vin cotto reduction and saffron risotto alla milanese. The shanks were large and meaty, very tender and very flavorful. They satisfied my inner carnivore. The risotto was okay, but it didn't impress me. 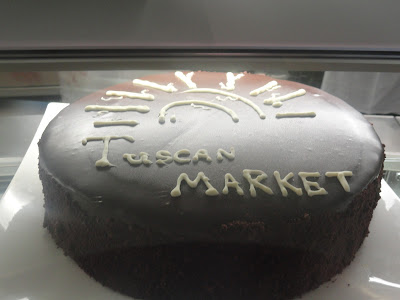 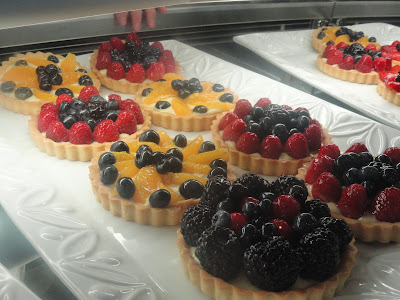 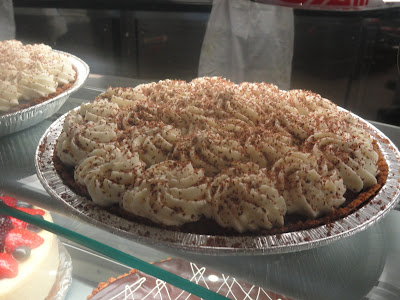 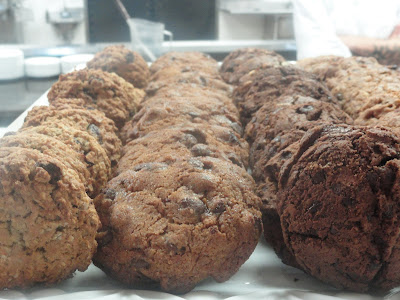 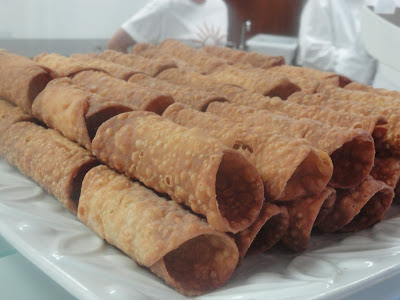 There was a smorgasbord of desserts available to us after dinner. We check out the various gelatos, grab some cookies, get a freshly stuffed cannoli, have a piece of chocolate cream pie, apple pie, chocolate cake, fruit tarts and so much more. A sweets overload! The cookies, such as chocolate chip, were very good, with a crunch outside but a more soft and chewy interior. They certainly tasted like an excellent homemade cookie. I also enjoyed the silky chocolate cream pie. And I already mentioned the delicious gelatos. 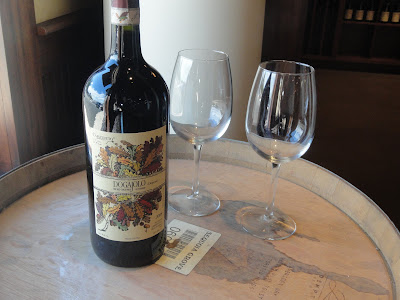 I think the concept behind the Tuscan Market is excellent, a one stop destination for great, fresh Italian food and wine. Based on the samples I tried, the foods should be delicious and there is certainly plenty of diversity. As it is in Salem, it is only a short drive from the Boston area, just up Route 93, which makes it very accessible. Tuscan Market is loaded with potential and I wish something similar existed in Boston. Once the market opens, I will return there and provide my readers an updated report. I am most curious as to the pricing, especially for the prepared foods.
Posted by Richard Auffrey at 4:00 AM

So great to see you, and to meet your lovely wife! This was such a fun event.

Can't wait to check it out! Mid-October seems so far away after looking at those pictures...

What a great reason to drive down to Salem! I can't wait to check it out!