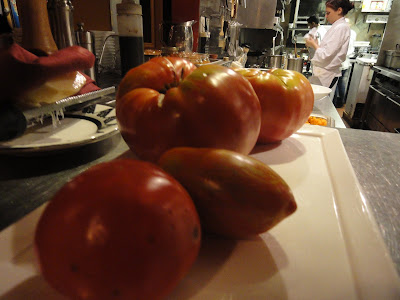 It was almost as if I stumbled into an episode of Iron Chef where the secret ingredient was heirloom tomatoes. But the stakes were raised in this challenge by the addition of a second secret ingredient, basil. Could Chef Vittorio Ettore of Bistro 5 create five amazing courses using these two secret ingredients?

Vittorio was fortunate that he didn't have only one hour to prepare his dishes, but it is a challenge nonetheless. How do you showcase the tomato in five different yet interesting and delicious ways? It would be simple to make a red sauce but then that would not be a challenge. Vittorio also wanted the dishes to be visually appealing and to engage the diners, to make them feel as if they had just come in from the garden. In my eyes, he clearly won this Iron Chef-like challenge. 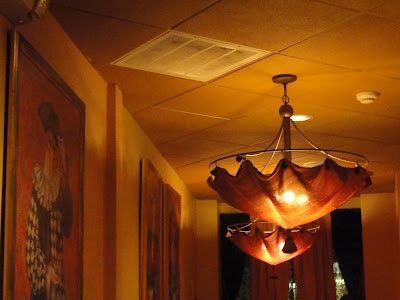 All this month, Chef Vittorio presents a special Heirloom Tomato & Basil Tasting Menu. You can select Three Courses for $45 (with optional wine pairing for $20) or Five Courses for $65 (with optional wine pairing for $25). Each course uses a different heirloom tomato and a different basil, with most of the basil picked from Vittorio's own gardens. I was invited as a media guest to try out the special tasting menu and it was a wondrous dinner.

I have long been a fan of Chef Vittorio and Bistro 5, and have dined there during previous Heirloom Tomato events. In 2010, Bistro 5 was awarded my Favorite Suburban Restaurant, its third consecutive year in that position. I also interviewed Chef Vittorio for my Culinary Creativity series. So I had high expectations for this dinner, and I was not disappointed in the least. 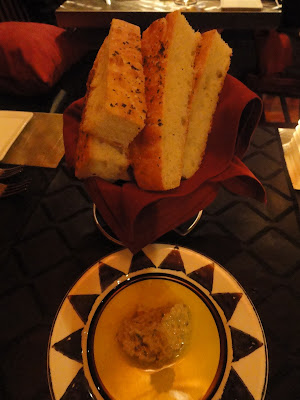 Your dinner begins with a basket of focaccia bread and chickpea puree with olive oil. The bread is fresh, soft and has a nice blend of salt and herbs atop it. The puree and oil is an excellent accompaniment and you might find yourself finishing off the entire basket. 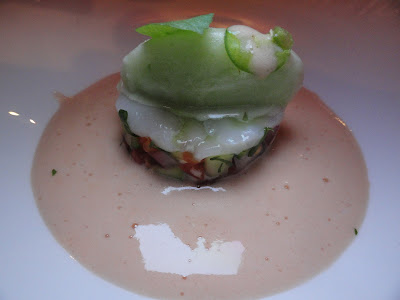 The first course was Gazpacho, using a Mortgage Lifter tomato and Lemon Basil, though this was far from an ordinary gazpacho. The Mortgage Lifter was developed in the 1940s and its creator, after selling a bunch of the plants and then paying off his mortgage, named it "Mortgage Lifter." This was a dish of layers, with the gazpacho at the very bottom. It was then topped with Scallop Ceviche, which was then topped with Cucumber-Jalapeno Sorbet and a leaf of Lemon Basil. Finally, the Gazpacho Cloud was poured into the dish.

A great presentation, this dish also had plenty of compelling layers of flavor and textures. The Cloud seemed creamy and rich yet there was no dairy added to it at all. The thin scallop slices were silky smooth while the chopped veggies added a nice crunch. The heat of the jalapeno was muted to some degree by the chill of the sorbet. What a fantastic way to begin the dinner, and it was enhanced by a glass of the Villa Sandi Prosecco Brut which was light and crisp with pleasant fruit flavors and a hint of sweetness. 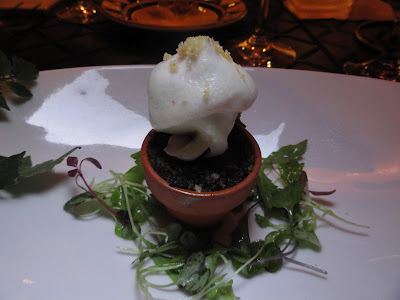 For course two, we had the Potted Tomato “Panzanella,” using the Cosmonaut Volkov Tomato and Lime Basil. This tomato, though of Ukranian origin, was named by a former Russian space engineer after Vladislav Volkov, who died while returning home from a space station. This is another very cool presentation, with a Mozzarella Balloon and a Panko and Black Olive “Soil" in the pot. The balloon contained a delectable, creamy tomato mousse while there was more tomato and mozzarella below the crunchy and earthy "soil."

With this dish, Chef Vittorio also gave us leaves from a tomato plant, to run between our fingers and smell. He wants his diners to gain a sense of the garden, to imagine themselves there. Far too often we get removed from the source of our food and that is a mistake. We should make that connection, to better comprehend exactly what we are eating, to better respect the farmers producing our food. Kudos to Chef Vittorio for taking a positive step in that direction.

With this dish, we sipped a glass of the 2011 Cantina Santa Maria La Palma Vermentino Aragosta from Sardegna. I found this wine to be intriguing, with an almost smoky taste, with nice mineral notes and some subdued green apples flavors. 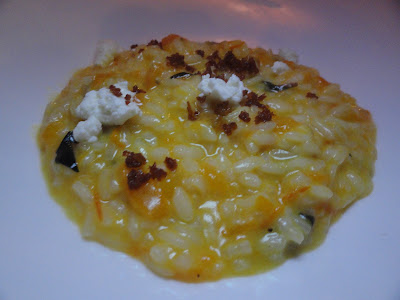 Next up was the Heirloom Tomato Risotto with Valencia Tomato & Opal Basil, and topped with Goat Cheese and Prosciutto Dust. The origin of this tomato's name is unknown, though it might derive from its orange color and smooth, round shape like that could resemble a Valencia orange. The tomato gave a more orange color to the risotto, which was a superb dish. The rice was cooked perfectly, just firm enough, and the creamy sauce was packed with rich, tomato flavor. The goat cheese added another layer of silky creaminess and each bite I had of the risotto with goat cheese was pure bliss in my mouth. I could have easily devoured three more dishes of this risotto.

I might not have chosen a Malbec to pair with this dish, but the 2010 Ruta 22 Malbec, from Argentina, actually worked well. It was a milder Malbec, with pleasant but restrained spice notes, and appealing black fruit flavors. It did not overwhelm the risotto as I worried that it might. 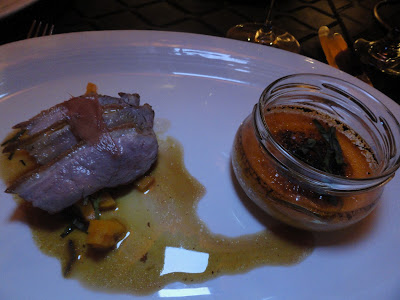 Our next dish was the Rohan Duck with Smoked Speckled Roman Tomato & Thai Basil, accompanied by a Creme Brulee, Sweet and Sour Butternut Squash, and Pickled Ginger. The creme brulee stole this dish! What an incredible savory dish, with a creamy tomato base, topped by a slightly sweet crunch, and hints of smokiness. The tomatoes for the creme brulee are roasted, smoked, and then made into a puree to which is added cream, egg yolks, parmesan cheese and a little sugar. I don't remember that last time I tasted a savory creme brulee, but this example makes me wonder why more chefs aren't trying to create them. The duck was tender and flavorful, cooked perfectly, and the tiny cubes of squash had an interesting contrast of sweet and tart.

With the duck, we drank a a 2010 Gran Sasso Montepulciano d'Abruzzo, another good choice. A nice, easy drinking red that was not too tannic and had pleasant flavors of cherry, vanilla and raspberry which complemented the duck well.

Dessert was a mess! But intentionally. The dessert course was the Tomatina, a homage to the annual summer festival in the Valencian town of Buñol where everyone has a huge tomato fight. The people end up covered in tomato bits and I am sure cleaning up after this event is quite an endeavor. In the video above, Chef Vittorio prepares and explains the Tomatina tableside.

The Tomatina is made with Organic Peach Mousse & Cinnamon Basil, as well as Basil Yogurt Gelato,Vanilla Bean Crème Anglaise and Sweet Pistachio Pesto. He also uses a spun sugar tomato which actually resembles a glass container, and which can be a surprise when he tosses it into your bowl. Yes, it looks like a mess but it was delicious to eat, with a great blend of flavors which fill your mouth with an enticing melange. With the dessert, we enjoyed a glass of the 2010 Elio Perrone Bigaro Bachetto d'Aqui. A fine bubbly with great red fruit flavors and only a mild sweetness, nicely balanced by its acidity.

Our server, Jodi, did a great job, and she was attentive and personable. Overall, this was a fantastic dinner, an excellent showcase of the culinary creativity of Chef Vittorio. He truly made the tomato the star of each dish, but made sure as well that each dish was complemented by other flavors and textures. During this month, the dishes might change, dependent on the availability of certain ingredients and the inspiration of the chef, but I am sure you will greatly enjoy whatever he prepares. Rush down to the Heirloom Tomato & Basil festival and experience an Iron Chef moment.
Posted by Richard Auffrey at 4:00 AM