Over the weekend, I ate dessert for breakfast. Cookies, whoopie pies, candy, chocolates, ice cream, brownies and much more. Why would I do that?

Because I attended the 4th Annual New England Dessert Showcase, hosted by The Anthem Group, a Boston-based marketing and event agency. There were over 50 local exhibitors offering a smorgasbord of desserts and the media hour started at 10am. So, when I should have been dining on bacon and eggs, I ended up indulging my sweet tooth instead.

I have decided to list my top 3 finds at the Dessert Showcase, those items which most appealed to my taste and which were new to me. These are all items which you should seek out. 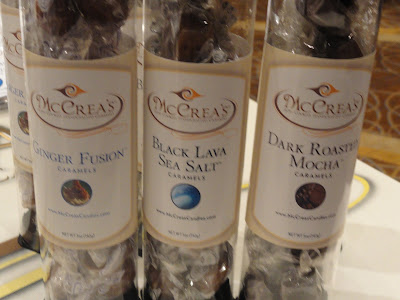 McCrea's
I do have a weakness for caramel, but that also makes me picky about it as well. McCrea's, located in Hyde Park, was founded in 2009, the brainchild of Jason McCrea who has a background in chemistry. He desired to create a top notch caramel and formed a team to help him produce it. The caramels are slow-cooked, small batches created in an old fashioned style. They even purchased a special wrapping machine, from 1910, which was retooled so they could wrap their caramels in a more traditional fashion.

They currently produce five different flavors, including Black Lava Sea Salt, Dark Roasted Mocha, Mad Vanilla, Tapped Maple and Ginger Fusion. By the end of the year, they will likely add about 11 additional flavors, including some created with spirits such as Scotch. They will also create some seasonal caramels, maybe one with Champagne too. They are available in about 60 stores throughout Maine and Massachusetts, including a few Roche Bros. and Whole Foods.

The Black Lava Sea Salt was an excellent, sweet chewy caramel with a light hint of saltiness and tiny bits of crunch from the salt. I am looking forward to their new flavors, especially those with alcohol. 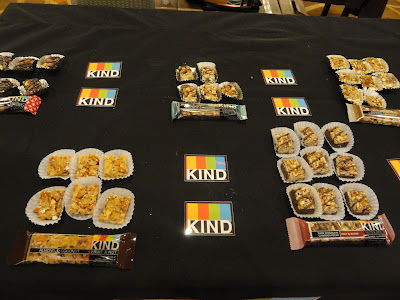 Kind Healthy Snacks
These are advertised as "healthy" snacks and kind of look like granola bars so you might pass them by without much of a thought. Yet you should stop and give them a try. KIND was established in 2003 by Daniel Lubetzky. "KIND was founded on the principle of holistic kindness, and we pride ourselves on creating new paths that avoid false compromises. Instead of "Or" we say "And". We choose healthy and tasty, convenient and wholesome, economically sustainable and socially impactful."

Kind Healthy Snacks are all natural whole nut & fruit bars, which emphasize natural protein, fiber and 5 or less grams of sugar. These are not really low calorie bars though they may be healthy in a number of other ways. They have plenty of different flavors, including a number with chocolate. Though I enjoyed the Dark Chocolate, Nuts & Sea Salt and Madagascar Vanilla Almond bars, my favorite was the Almond & Coconut.

The Almond & Coconut bar contains almonds, dried coconut, honey, non-GMO glucose, puffed rice, chicory fiber, and soy lecithin. Nutritional is has 210 Calories, 13 grams of Total Fat, 19 grams of Total Carbohydrates, 10 grams of Sugar and 4 grams of Protein. But what was most important to me was its taste. Plenty of delicious coconut flavor, a mild sweetness, nutty accents and a nice chewy texture. It didn't taste healthy and is going to please any dessert lover. 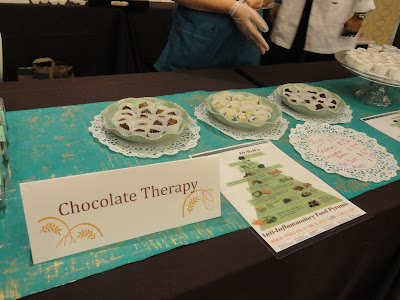 Chocolate Therapy
Chocolates with a medical theme. David and Pam Griffin, husband and wife, decided to start a chocolate business together, and decided to use many ingredients which are known to possess various therapeutic effects. Chocolate itself has long been studied for its own therapeutic effects. They now produce over 30 varieties of chocolates and candies, with a store in Dedham and a second store opening soon in Framingham.

Their Sea Salt Caramel is made with Tahitian vanilla, sea salt, and dark chocolate and was an excellent blend of those flavors, clean, sweet flavors. The Gen Mai Cha is made with green tea, brown rice, and white chocolate, all with a dark chocolate cover. It had a strong green tea flavor which I very much enjoyed. Finally, the Spicy is made with dark chocolate and hot spice. Upfront, all you taste is the rich chocolate but once the chocolate is gone, there is an intense, spicy kick on the finish. All very well done chocolates.
Posted by Richard Auffrey at 4:00 AM

Richard, thank you for the heads-up on McCrea's. I'm not a big fan of sweets but I love the layered complexity of real caramel. Will be checking them out very soon!