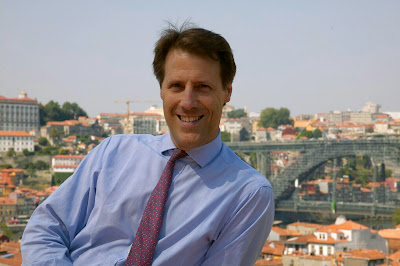 "Port is the oil of good conversation."
--Adrian Bridge

After dinner, when people wish to relax and mellow out, is probably the most common time for Port to be enjoyed. Once it might have been just a group of men, ensconced in a library or study, smoking cigars and drinking Port while they discussed world events, as well as more personal matters. That probably still happens in some places however the general nature of Port consumers has changed, and both men and women now enjoy a glass of Port.

Sipping Port often accompanies good conversation, maybe a bit less inhibited than what would have occurred earlier at dinner. People might fear to discuss topics such as politics and sex over their apertifs, but at the end of the night, with a strong glass of Port, the walls start dropping. Few topics remain taboo and people are more apt to let their hair down, to be more willing to discuss anything. In that respect, it reminds me of an ancient Greek symposium.

Adrian Bridge, the CEO of the Fladgate Partnership, is one of the most important men in the Port industry and he was in Boston last week. I had the opportunity to dine with him and sip some Ports at The Top of the Hub. It was an enjoyable and informative evening, providing a glimpse into the Port industry as well as a deeper understanding of the man himself.

Adrian was born in Belleville, Ontario in 1963 and twenty years later, in 1983, he was commissioned into the 1st Queen’s Dragoon Guards. After serving in the military for five years, he took a much quieter position at an investment bank. However, in 1994, his career would take another drastic change, and he would embrace the world of Port.

Back in 1982, Adrian met his wife, Natasha, who is the daughter of Alistair Robertson, the owner and chairman of the Fladgate Partnership. Eventually, in 1994, Alistair asked Adrian to enter the family business so Natasha and he moved to Portugal. In 2000, Adrian became the Managing Director of the Taylor Fonseca Port Group which soon grew with the purchase of Croft Port and Delaforce Port in 2001. The company became reorganized as the Fladgate Partnership, with Adrian as its CEO. Natasha also plays a significant role in the company as the Chief Blender.

Adrian is not resting on his laurels and seems perpetually busy with new endeavors. For example, he created a new style of Port, Croft Pink, and other producers have since followed suit, producing their own pink Ports. In 2010, he opened a new luxury hotel, The Yeatman, which has already earned numerous awards for everything from their wine cellar to their spa. The photos on their website show an absolutely gorgeous hotel and the amenities include a Michelin star restaurant, a huge wine cellar concentrating on Portuguese wines, a compelling spa, and much more.

Their wine cellar includes over 1100 different Portuguese wines and I have reviewed their 2012 Winter Wine Edition, a list of 82 Portuguese wines that are available by the glass, priced from 5-100 Euros. Not many places have that many wines available by the glass. It is a fascinating list, broken down into interesting categories such as "The Groundbreakers" and "The Irreverants." Sparkling wines, Whites, Reds, Rosé, Port, Madeira, and Dessert wines. It is also cool that the hotel does not sell only Fladgate Partnership Ports, but also sells their competitors' Ports.

Though it might seem Adrian is a workaholic, he makes time to engage in one of his other passions, mountain climbing. That is a challenging pastime, and Adrian often brings Port with him to enjoy once he reaches the summit. He has even climbed a mountain in Antarctica, toasting the completion with Port, though his biggest worry had been the extreme cold freezing the Port so he needed to boost the alcohol so it could survive the harsh conditions. 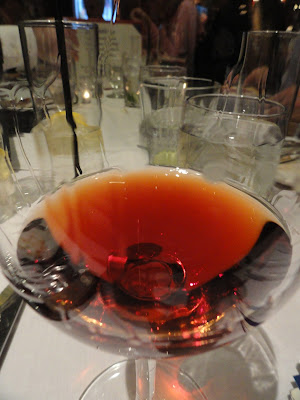 In the U.S., the Fladgate Partnership dominates the Port market, accounting for about 28% of Port sales. Their Port shipments to the U.S. rose 11% in 2011 and partial numbers for 2012, through August, indicate another 5% increase. Aged Tawny Ports have seen very strong growth, especially to restaurants, as they seem to be an easier sell to patrons rather than Vintage Port. Port sales to restaurant have generally remained steady each month, indicating little seasonal variation. However, Port remains a niche beverage, one which many more people need to drink and explore.

Adrian especially noted a significant difference between Bordeaux/Burgundy and Port, summing up his position as "No fruit, no wine." Good Port, even Vintage, should still present a strong fruit component even when it is young. Sometimes though, when you have a young Bordeaux or Burgundy, those which are intended to be aged for a long time, they present very little, if any fruit. You are told you must wait to drink them, that they must be properly aged before they are drinkable. Adrian does not agree that is the way wine should be. All such wines should still present fruit, even at a young age.

What differentiates Fladgate Partnerhship Ports from other Port companies? There are a few different reasons and they can be significant. First, there is a different mindset at Fladgate, where they desire to produce Vintage Port from every grape. Thus, there is a careful attention to detail, a concern to treat each vineyard as if it were special. Some other companies view certain vineyards and grapes as only for their cheap, low quality Ports. And that may very well be reflected in how they treat such matters, never seeking to better the grapes, vineyards and Port.

Second, only about 1% of Port production is still done using the traditional practice of foot treading grapes in stone lagares. Of that 1%, about 60% of it is done by the Fladgate companies, and about 20% of their total production uses foot treading. All of their Vintage Port, about 5000 cases, is produced with foot treading. As they foot tread around 20,000 cases in total, some of that will end up in their nonvintage Ports.

They conduct the foot treading in six different ways, despite the fact it is very labor intensive and more costly.   Tests were conducted with mechanical treaders but they ultimately determined that foot treading worked best. They do not fully understand the reasons why foot treading works so well, and if they did, maybe they could replicate it. As long as it produces superior quality Port, they will continue this practice.

Third, an important element, often overlooked, in the production of port is the neutral spirit used to fortify it. Consider that 20% of a Port bottle consists of that spirit so it is obviously a significant factor. If you use cheap spirits in your Port, the quality of the Port can degrade with time, and sometimes quickly. Fladgate now acquires their spirit from a company in Bordeaux, a high quality and expensive spirit, but which they feel is essential for the quality of their Ports. Any item is only as good as the quality of its essential ingredients so that using a high quality spirit is warranted.

One of the biggest current challenges for Port producers has to do with spirits. Back in 2008, the European Union passed wine reforms which led to the phasing out of distillation subsidies. About 200,000 hectares of vineyards were pulled up in response. Without the subsidies, there has been a shortage of these neutral spirits and subsequently the cost has increased, and now may be close to 4 Euros per liter. Who will then pay for those increased costs?  It would be tough to place that cost on the shoulders of consumers, especially for the cheaper Ports. The higher end Ports are more capable of increasing prices without a significant reaction from consumers. Adrian seems hopeful that the shortage will peak in 2013, topping out the price increases. 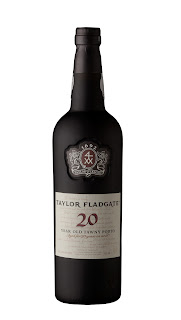 As many wine regions seem to be concerned about climate change, I asked Adrian about how it affected Fladgate, if at all. Adrian doesn't believe it has much impact in Portugal, especially as Portugal is already a hot region. If anything, climate change might cause the weather to be a bit more unpredictable. Fladgate has not instituted any specific changes to their usual practices in response to concerns about climate change.

Their irrigation issues have more to do with cost than climate change. He explained that the Douro is actually a series of lakes and not a river. Runoff accumulates in these lakes so it is imperative to use less chemicals in the vineyards, so as to not pollute the lakes. In addition, all of those chemicals are expensive, another good reason not to use them. Adrian hopes to convince other producers to use less chemicals as well, though he wants to lead by example rather than just preach to his colleagues and competitors.

What does Fladgate plan for the future? Adrian indicated that they have no current plans to produce Douro table wines unlike many of their competitors. As they still see growth in high quality Port, they feel their efforts are best directed to continue producing great Port. He wouldn't rule out the possibility that could change one day, but it won't occur in the near future. They are continuing to develop new markets, such as in places like South Africa and parts of South America. On a smaller note, they have opened a new wine store and began creating wine clubs. Growth is coming in many different aspects of their business. In addition, as the Port industry consolidates, there is the possibility Fladgate could acquire more Port companies.

A question on the mind of many Port lovers is whether Fladgate will declare 2011 to be a Vintage or not. That decision has not yet been made though there is some optimism that it will be declared as a Vintage. Even if so, it is unsure how much Vintage Port would be produced, and it is likely to be a smaller amount than previous vintages.

On a more personal level, I asked Adrian about his usual Port consumption at home. Though he does not drink Port every evening, it is a regular element of his life and the most common Port he drinks at home is the Taylor Fladgate 20 Year Old Tawny. That is certainly an excellent choice, one that would appeal to many Port lovers, and would probably convince many others to start enjoying Port. When Adrian holds parties at his home, he breaks out the Vintage Port, usually something from the 1960s or 1970s. So how do you get on his invite list? 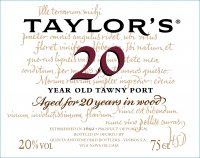 After dinner, we tasted through five Ports, including three 2009 Vintage Ports (Croft, Fonseca & Taylor Fladgate), a 2007 Taylor Fladgate LBV and a Taylor Fladgate 20 Year Old Tawny. The 2009 Vintage Ports were fascinating, as each was noticeably different. The Croft was bright and fruity while the Taylor was a bit more closed, though still with subdued fruit notes. The Fonseca impressed, a nice balance of fruit and spice, with a complex and seductive character. These are capable of being enjoyed now, though you might derive even greater pleasure after these have been allowed to age for a time. The 2007 LBV was pleasant, fresh and smooth, with tasty fruit. However, the winner was easily the 20 Year Old, a sublime Port which I have enjoyed greatly on prior occasions.

Grab a bottle of Port, gather together some friends and enjoy the conversation that flows.
Posted by Richard Auffrey at 3:00 AM