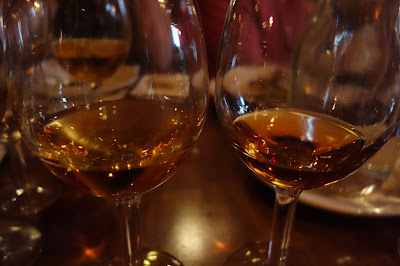 "Although it is indeed a rare pearl, the king of food pairings really exists, and it's fino sherry."
--Taste Buds and Molecules: The Art and Science of Food With Wine by Francois Chartier

Too many people in the U.S. still believe that Sherry is primarily a dessert wine, and that is partially due to the fact that primarily sweet Sherry is imported into the U.S. However, dry Sherries are wonderful wines, and extremely food friendly. More people need to taste dry Sherry. Like Sake, many dry Sherries possess a prominent umami taste, contributing to its versatility with food. Sherries can also pair well with some foods which other wines have difficulty working with, such as asparagus.

I am a huge fan of Sherry and you can read more than two dozen of my articles at All About Sherry, from a History of the Sherry region to the Mystery of Palomino. Several of those articles discuss pairing Sherry with food, such as Sherry Food Pairings: More Bellota Please, Thanksgiving Wines? Consider Sherry or Saké, and Fino Sherry: The King of Food Pairings. Fortunately, in the Boston area, there are some restaurants which are promoting Sherry, helping to show their customers its versatility with food. This is great news for wine lovers willing to expand their horizons, to take a chance on something new to them. 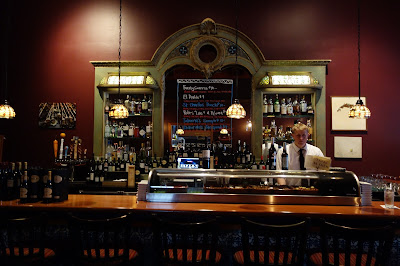 Chef Deborah Hansen, the owner of Taberna de Haro, a Spanish restaurant in Brookline, is a huge Sherry fan and it is reflected in her restaurant. Taberna de Haro was also my Favorite Spanish Restaurant of 2012. One year ago, Deborah expanded her restaurant, essentially doubling it in size, and adding a very cool bar (pictured above). The restaurant carries over 40 different Sherries, and Deborah is planning on adding even more in the near future. This is a perfect place to experience the joys of Sherry, accompanied by compelling Spanish cuisine. 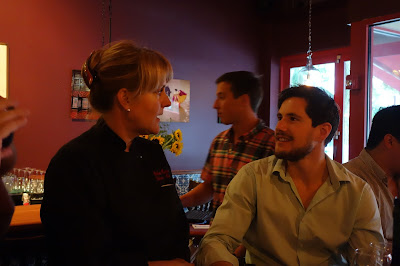 Last week, Deborah (pictured above) hosted a special media Sherry event, presenting nine different Sherries from Bodegas Gonzalez Byass paired with various tapas selected by Deborah. The Sherries of Gonzalez Byass are imported by The San Francisco Wine Exchange and distributed in Massachusetts by Bay State Wine & Spirits. The tasting was led by Christopher Canale-Parola (pictured above), the Export Manager for Gonzalez Byass and a former winemaker. Christopher is young, knowledgeable and passionate and his love for Sherry is infectious. He is an excellent spokesperson to help introduce Sherry to a new generation of wine lovers.

Three years ago, I traveled to Spain, visiting Bodegas Gonzalez Byass, and you can read my article, Apostles & Thirsty Mice, for background on the winery and their wines. It was a fascinating visit, with plenty of delicious sherries. And thirsty mice who love sweet Sherry. 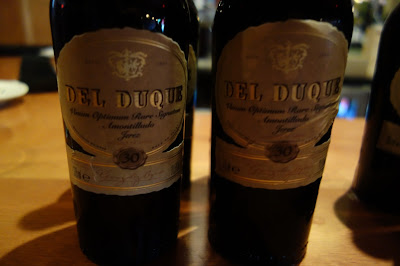 Our evening began with a glass of Tio Pepe Fino, which is made to be a richer style of Fino, and not as pungent or tart as other Finos. It is a more approachable of a Sherry, so is a great introductory Sherry for newcomers. It is dry, crisp and clean with hints of nuts and bread and possesses a fairly lengthy and pleasing finish.

Deborah feels that Fino pairs well with fried fish, and one of the dishes paired with this Sherry was Bienmesabe, small pieces of delicious, marinated fried haddock. The pairing worked very well and I could easily see having Fino this summer with fried clams. This Fino also works well with salty foods, and that was evidenced with the Gildas (skewered olive, boqueron & guindilla pepper) and Aceitunas (Spanish olives). Think Fino for oysters too!

We then moved onto two Amontillados, the Vina AB and Del Duque VORS. The Vina AB was dry and light, with delicious nutty notes. The Del Duque VORS is named after the Duke who, in 1835, sold the first barrels to the winery. I have raved about aged Sherries before, and a VORS Sherry must possess an average age of at least 30 years. This Amontillado didn't disappoint with a smooth, complex melange of flavors, from dark nuts to leather and caramel notes. It is compelling and alluring, a superb Sherry which is sure to seduce your palate.

Deborah stated that Amontillado is very food friendly and she likes pairing it with fish. So, we enjoyed it with Sepia a la plancha, griddled cuttlefish with garlic, Spanish olive oil and sherry vinegar. I have enjoyed Amontillado with seafood before and I agree that is it a very good combination. We also had a dish of Jamon serrano con esparragos asados, Spanish ham wrapped around roasted asparagus with a house made oregano mayonnaise. As I dislike bitter green veggies, I didn't eat the asparagus though everyone who did partake, raved about the pairing. Asparagus is a very difficult food pairing for most wines, but Amontillado seemed to work great. 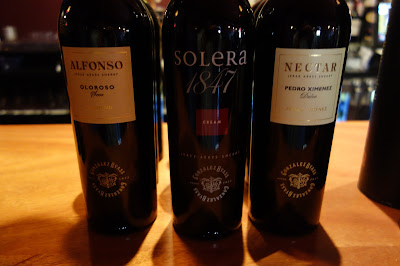 Next up was an Oloroso and Palo Cortado, darker, more oxidized Sherries. The Oloroso Alfonso was rich and spicy, with flavors of caramel, nuts and a mild brininess. The Palo Cortado Apostles VORS is an exceptional Sherry, made from 87% Palomino and 13% Pedro Ximinez (PX). As Palo Cortado can sometimes be bitter, some wineries add a little PX for sweetness. With the Apostles, they age the wine for 12 years before adding the PX for the next 18 years. This is a hedonistic wine, smooth, complex and tantalizing. This is a Sherry to slowly savor with great friends.

Deborah mentioned that she likes bitter tastes with darker sherries, and loves pairing Oloroso Sherry with pate and poultry. With these two Sherries, Deborah prepared a Pate de pato con endibias, a duck pate with endive and a fig vinaigrette. The pate was amazing, and its rich, earthiness went very well with the two Sherries. The bitter endive was also intended to be complemented by the Sherry. 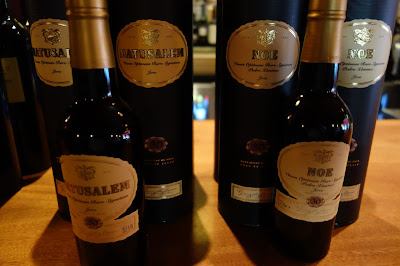 We continued with two more Oloroso Sherries, though both with a bit of sweetness. The Oloroso Solera 1847 is a blend of 75% Palomino and 25% PX, a concentrated, velvety wine with flavors of figs, raisins, and nuts. Its mild sweetness might remind you of some aged Ports. The Oloroso Matusalem VORS is a similar blend but it has an average age of at least 30 years. It is more complex, with deeper flavors of dried fruit, spice and leather. There is some sweetness but it is restrained, and the finish is lengthy and pleasing. Two more winners.

Deborah informed us that mushrooms is a classic Oloroso pairing and she also wanted to pair these Oloroso Sherries with the "pure animal of blood sausage."  Thus, we had Champinones rellenos de jamon (mushrooms stuffed with Spanish ham) and Morcilla a la plancha (griddled black sausage with roasted red peppers). The mushrooms were amazing, earthy and salty, and the blood sausage was tasty too, meaty and earthy. A superb course, I could have easily devoured a few more plates. Both Oloroso Sherries worked well with these dishes, and Deborah was spot on once again.

We ended the evening with two PX Sherries. The Vina Nectar PX is aged for about seven years, and had delicious flavors of caramel, figs, nuts and spice. The Noe PX VORS is aged for at least an average of 30 years, and its complex, sweet flavors tend more to raisins, coffee, spice, and cooked plums.

PX and blue cheese is a classic pairing, though Cabrales is usually used. Deborah though chose a Mitiblu cheese, a rich and creamy Spanish blue cheese, with dried apricots, walnuts, olive oil and honey. She did not add any bread, feeling it muddles the dish. It was pure creamy goodness with that tasty tang of blue which I love so much. Deborah also added that the best way to enjoy PX is often poured over ice cream. She even mentioned that bacon and PX work well together.

The evening provided more evidence of what I have said before, that Sherry is an excellent food wine and more people need to take a chance on placing it on their tables. Sample and taste some dry Sherries, from Fino to Palo Cortado, Manzanilla to Amontillado, and see what you have been missing.
Posted by Richard Auffrey at 3:00 AM