Crémant d'Alsace & The Spartans At Thermopylae 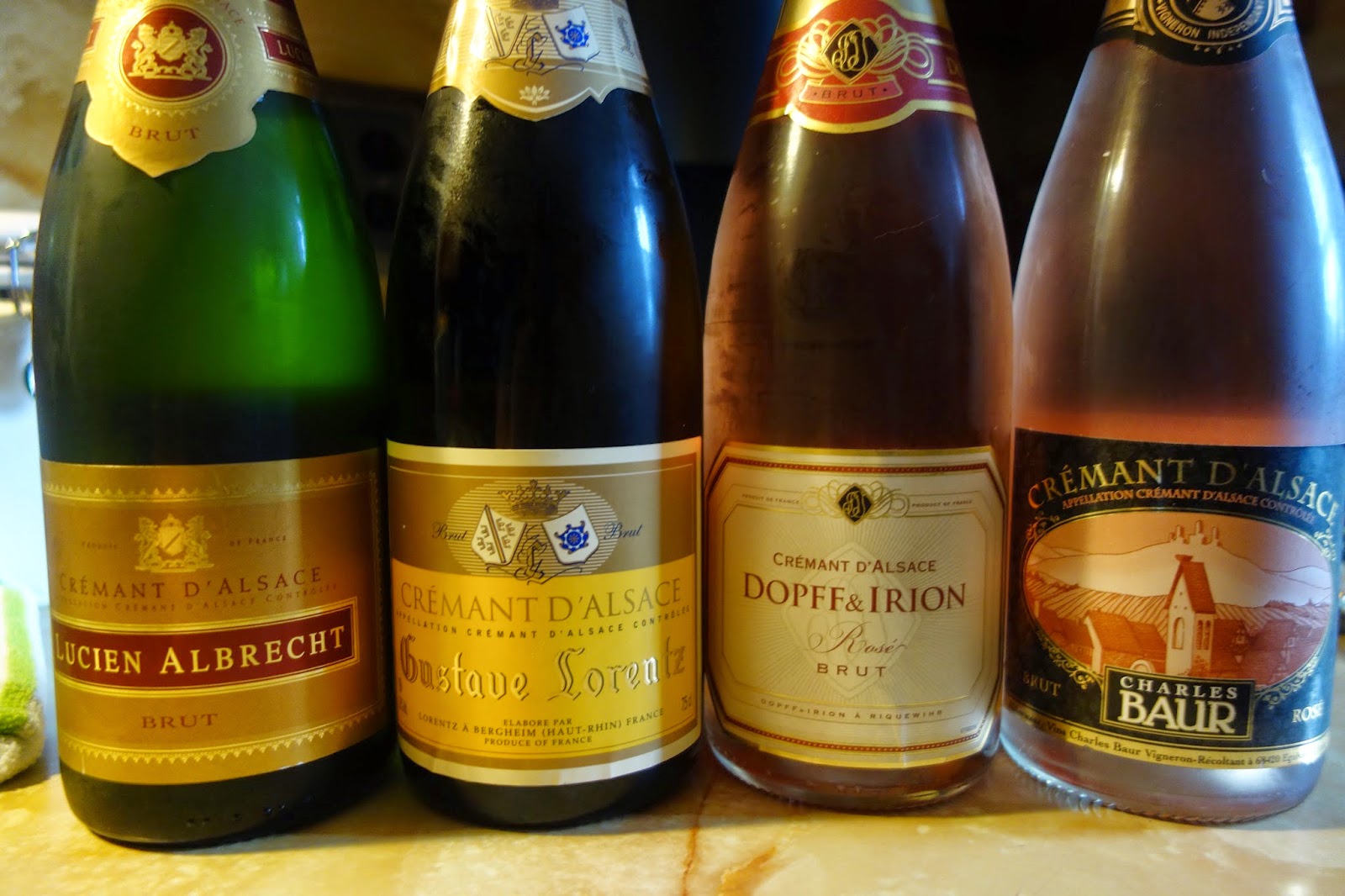 Last week, I pondered the similarity of Crémant d'Alsace to the 300 Spartans that defended the gates at Thermopylae against the massive Persian army. Yes, on the surface it may seem like a crazy comparison, but give me a few moments to explain.

On last Thursday, I participated in a Twitter Tasting event of four Crémants d'Alsace (all media samples). For some background on Crémant d'Alsace, please check out a few of my prior posts about this delicious Alsatian sparkling wine, including Gustave Lorentz: More Alsatian Wine Treasures, Alsatian Wines & Pheasant at Craigie On Main, and Crémant d'Alsace: A New Year's Eve Recommendation.

As I've mentioned before, Alsatian wines, and especially Crémant, isn't on the radar of many average wine consumers. When we consider statistics about the U.S. sparkling wine market, we see that Crémant d'Alsace is in a similar spot to the ancient Spartans at Thermopylae, as only about 300K bottles of Crémant d'Alsace are imported into the U.S. That 300K stands up to a massive army of other sparkling wines, including about 18M bottles of Champagne and 99M bottles of domestic sparkling wine. This massive army of Champagne, Cava, Prosecco and other sparkling wines is like the huge and diverse Persian army which threatened the Spartans.

Crémant d'Alsace is vastly outnumbered in the market yet it stands strong, possessed of great heart. Those familiar with Crémant d'Alsace understand its power and allure. They understand that the quality of Crémant d'Alsace allows it to compete well against any other sparkling wine. It might be considered an underdog, but you would underestimate it at your peril. Give this "Spartan" bubbly a try! 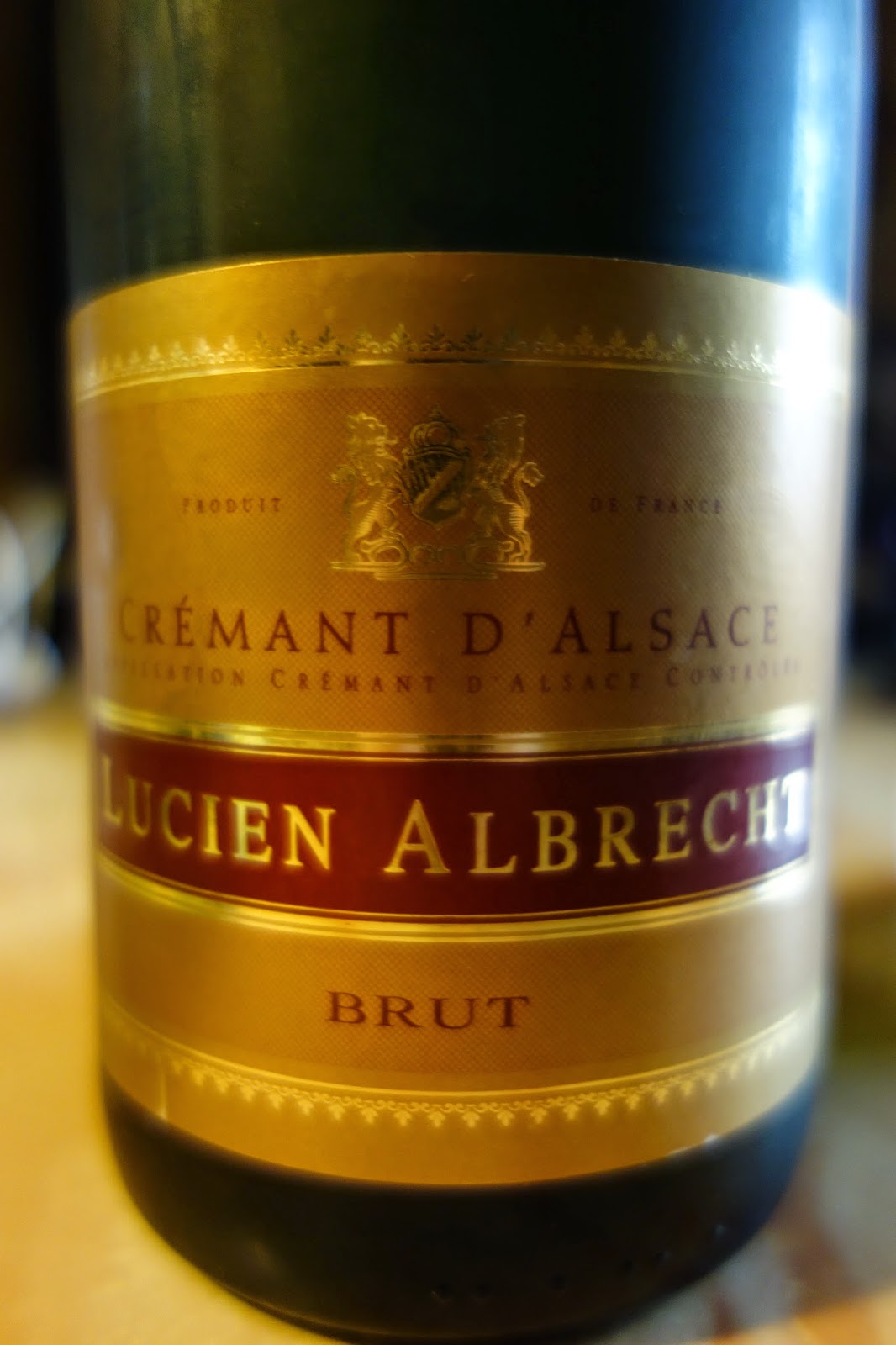 Onto reviews of four Cremants d’Alsace...

What a sense of history! The Lucien Albrecht winery traces its roots back nearly 600 years, as it was founded by Romanus Albrecht in 1425. Albrecht was also one of the primary proponents of the creation of the Crémant d'Alsace AOC. The Lucien Albrecht NV Blanc de Blancs Cremant d’Alsace Brut ($19) is a blend of 80% Pinot Auxerrois, 10% Pinot Blanc, and 10% Chardonnay. Crisp, clean, dry and elegant, it possessed a prominent lime flavor with an underlying minerality. Complex and refreshing, I wanted to sip this with a bag of salty potato chips. A good value at this price. 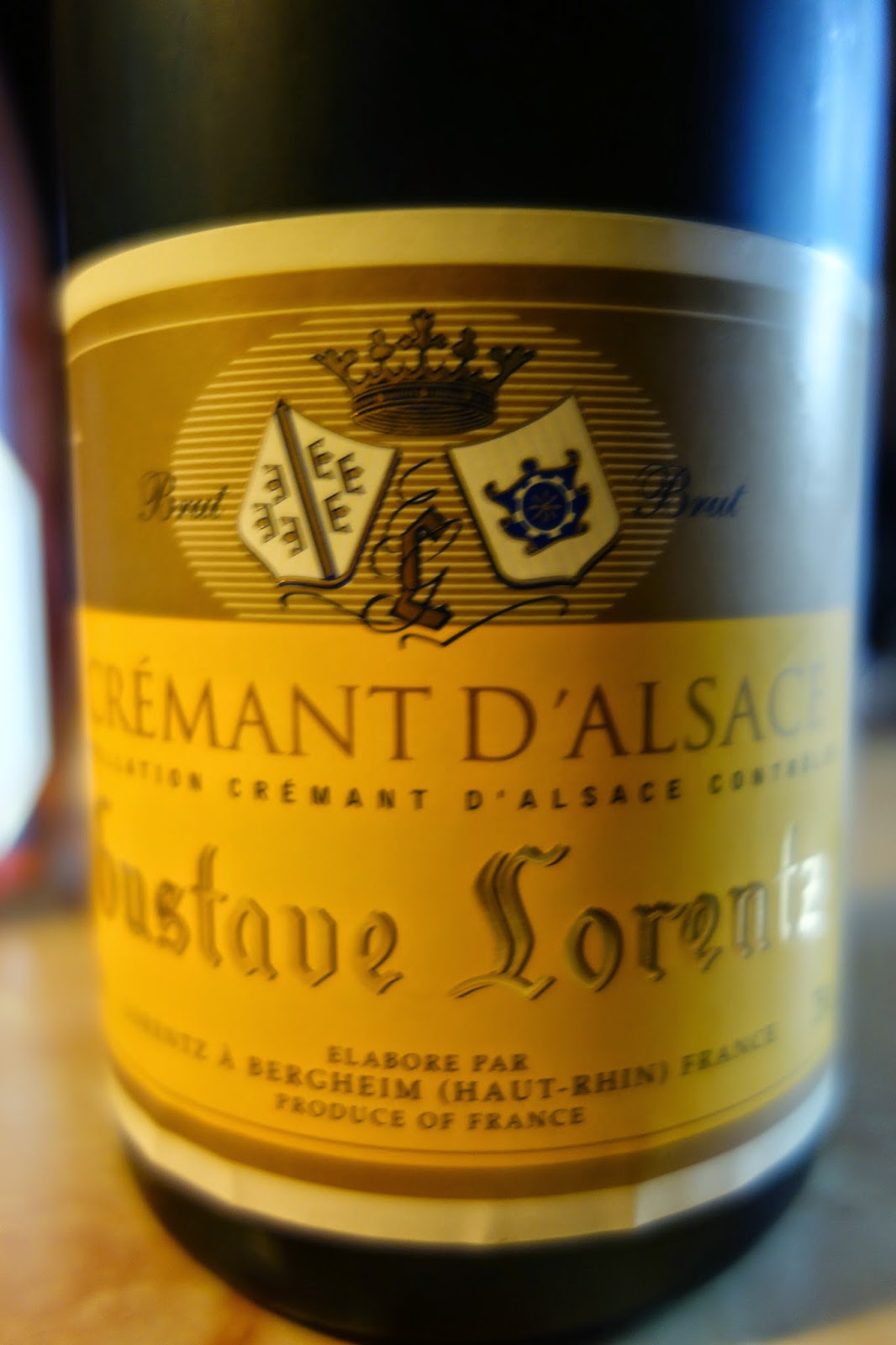 I've previously tasted the Gustave Lorentz NV Cremant D'Alsace Brut ($24.99) and my prior tasting note remains relevant. Though this Crémant is labeled as non-vintage, the winery does not blend vintages so all of the grapes in this wine are from the same vintage. The Cremant is a blend, in equal proportions of Chardonnay, Pinot Noir and Pinot Blanc. It spends 14-24 months on the lees, is disgorged three times a year, has an alcohol content of 12% and only 4000 cases are produced annually. It has a pleasant, fruity aroma of with a creamy, bubbly taste up front which finishes crisp and clean. There are appealing tastes of green apple, peach and melon. This is the type of sparkling wine that is going to appeal to many bubbly lovers. My craving for salty potato chips intensified with this bubbly. 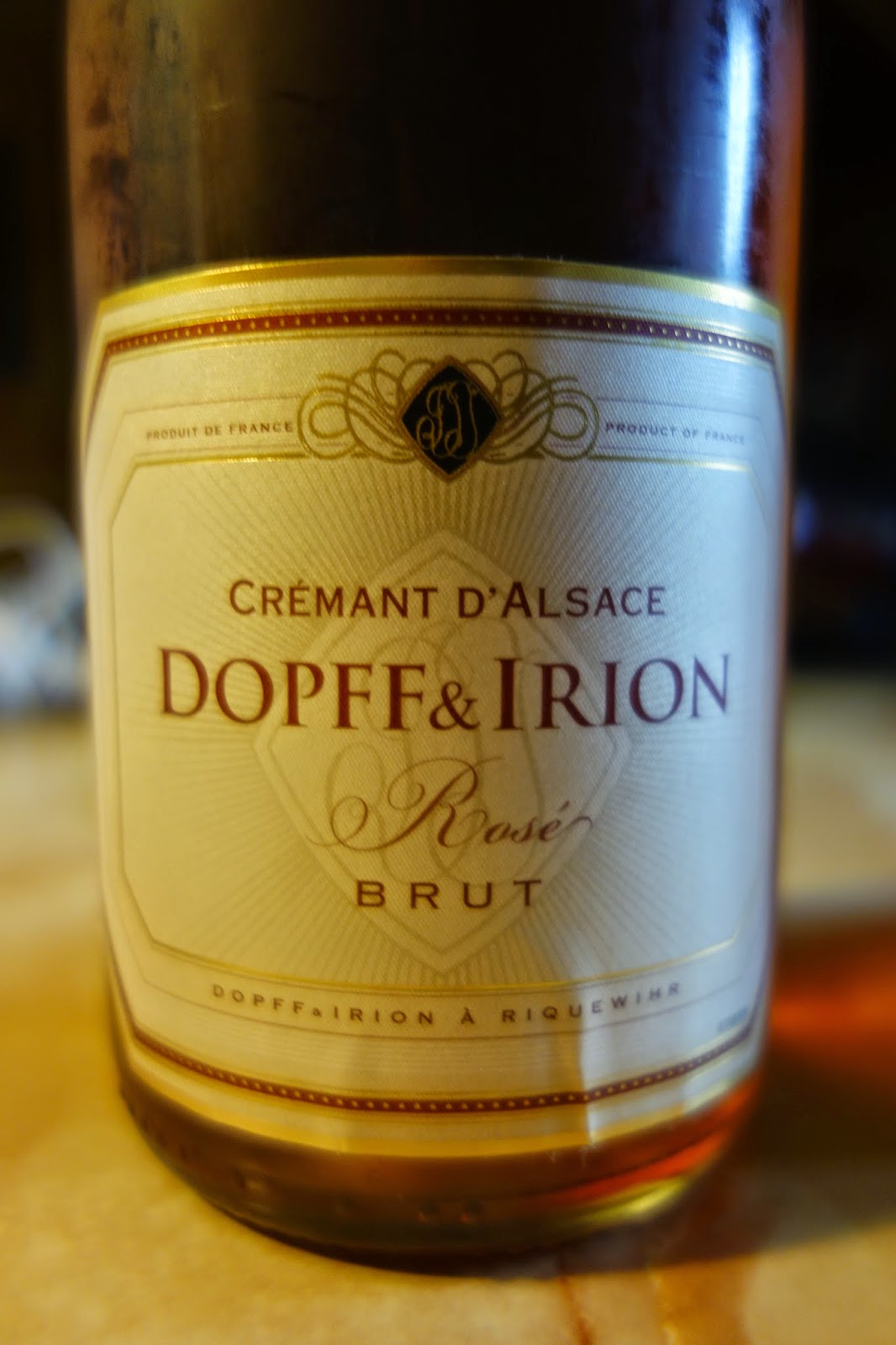 My favorite of the four wines was the Dopff et Irion NV Crémant D'Alsace Brut Rosé ($17). Another winery with roots hundreds of years in the past, back to 1574, the Dopff family were also the first, at the beginning of the 20th century, to create sparkling wine in the Alsace region. This Brut Rosé is made from 100% Pinot Noir and I likened it to a dish of strawberries and cream. Though dry and crisp, there was a rich creaminess to the wine, with plenty of delicious red fruit flavors, including plenty of strawberry. Complex and with a lingering finish, I found this to be a compelling wine, as well as an excellent value for the price. Out of the four bottles of Crémant, this was the only empty bottle at the end of the night. Thought the other bottles still tasted delicious the next day. 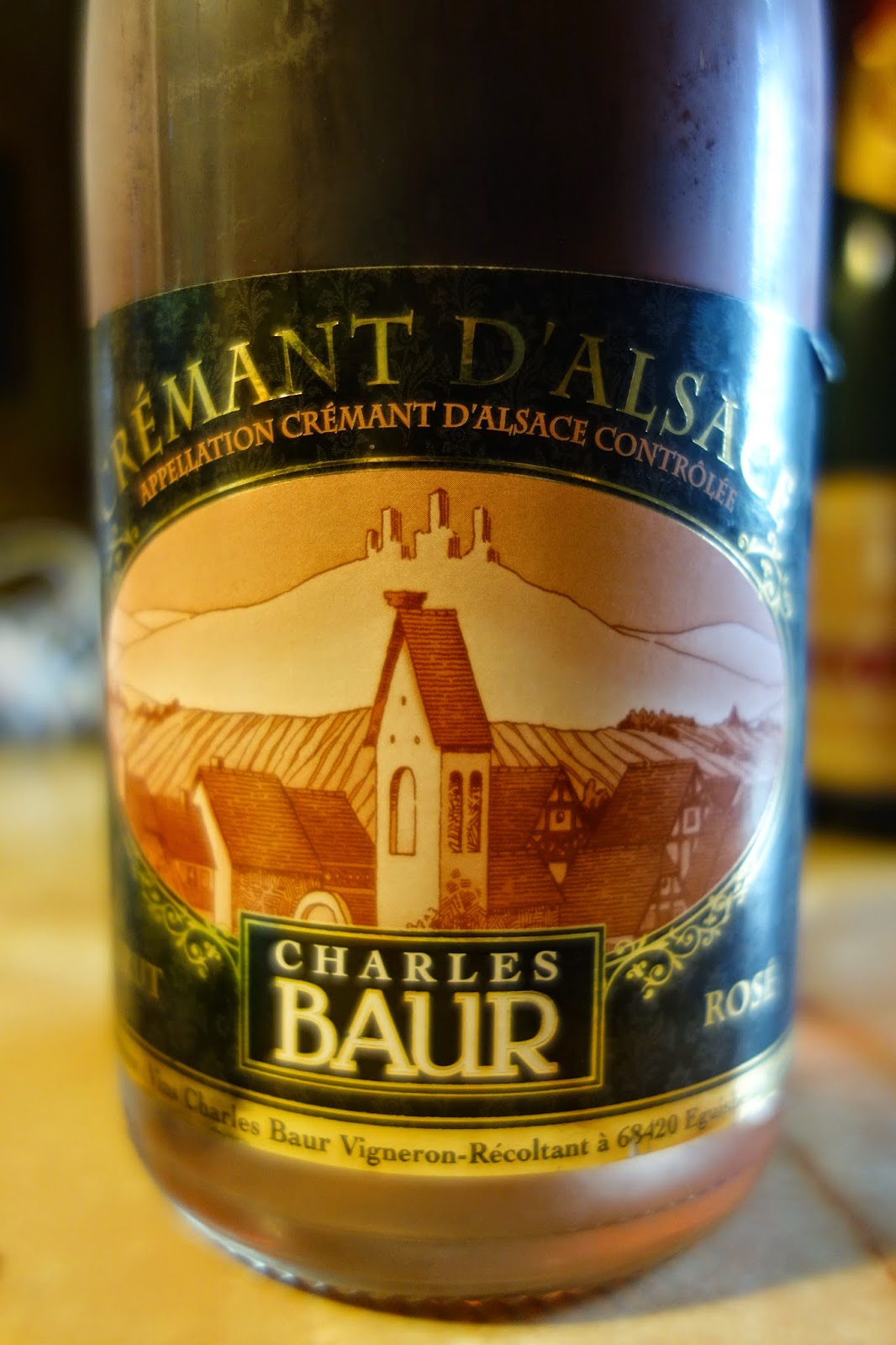 The Domaine Charles Baur NV Crémant d’Alsace Rosé ($19) is also made from 100% Pinot Noir and provided an interesting comparison to the Dopff et Irion. The Baur was a darker red in color, with more prominent red fruit flavors and almost seems to possess a touch of sweetness to it. It is also fuller bodied and creamier than the other. I liked this Rosé but my personal preference is for the Dopff et Irion.

Do not underestimate Crémant d'Alsace. It is delicious and often presents a very good value for the quality. It may be the best sparkling wine that you probably are not drinking, but should.
Posted by Richard Auffrey at 3:00 AM