Malden is home to numerous interesting & tasty restaurants, including a significant number of ethnic spots, from Vietnamese to Haitian. It would take you plenty of time to explore all of them, meaning you might miss out on some of the best places. For example, though Sousaku Bistro, a Japanese restaurant, has been open since the end of 2015, it was only until recently that I dined there a couple times for lunch.

Located at 166 Eastern Avenue, and set up a little from the road, it can be easy to drive by and miss this spot. And it isn't in an area that seems to get much foot traffic. Around the corner, on Ferry Street, you''ll find several other restaurants and most of the foot traffic is there. As such, Sousaku seems to fly under the radar and you need to intentionally seek it out. It is open six days a week, closed only on Tuesdays.

Sousaku has a quite large menu of Japanese cuisine, from Sushi to Yakitori, Kushikatsu to Rice Bowls, and so much more. Many of these are traditional dishes, but there are also plenty of more innovative dishes where the chef has created his own unique takes. Prices are generally reasonable considering the quality and quantity of the dishes. They have a fully stocked bar, including Sake (with several good options) and Japanese Whiskey. 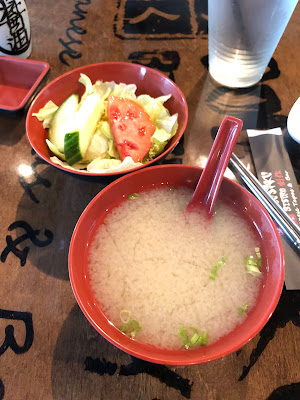 The Sushi Lunch ($12) includes 5 pieces of Nigiri Sushi and a Tuna Roll, accompanied with Miso Soup and Salad. The miso and salad were good, with a light and tasty dressing atop the salad. 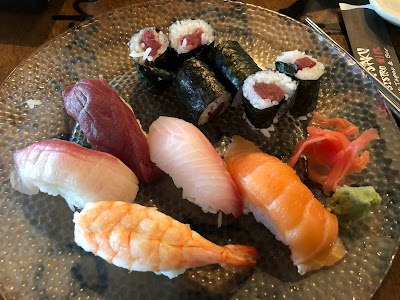 The Sushi was good-sized, tasted fresh and was very satisfying. Two pieces of Maguro are usually $7.50, meaning their Sushi is a bit more expensive than many other spots, but still less expensive than some high-end places. And based on the size and quality, the price is fair. This lunch special is a very good deal. 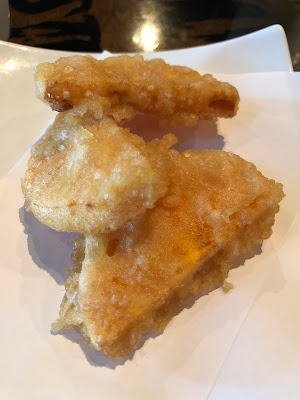 The Sweet Potato Tempura (3 pieces for $2.95) was exquisite, just perfect crispy tempura batter covering the tender sweet potato. I often judge a Japanese restaurant by the quality of their tempura and in this regard, Sousaku is a big winner. I would probably order some tempura every time I dined here. 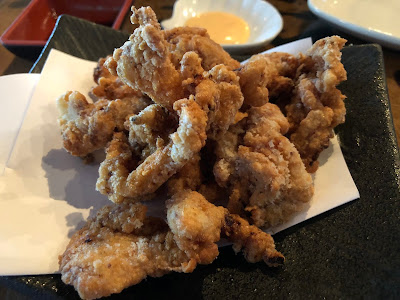 The Tatsuta-Age ($6) is deep fried marinated fried chicken in a light batter, and it was tender and moist with a nice taste to the flavor, with hints of possibly ginger. This has a much lighter batter than "chicken fingers" and it is more about the chicken than the batter. 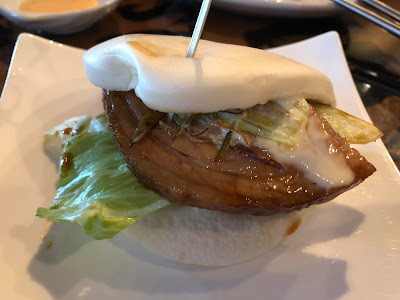 The Boky Bun ($6) is a roasted pork bun, served with lettuce, fried scallion & their special barbecue sauce. However, the menu doesn't mention there is also mayo on the bun, which was a fail for me. Otherwise, it was a delicious sandwich, with tender pork, a soft bun, and the fried scallions added a nice little crunch. 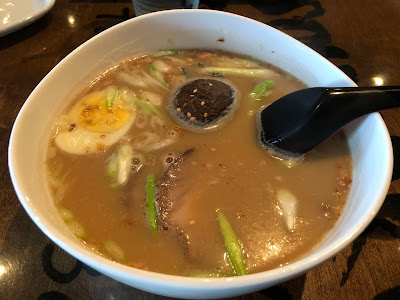 The Chashu Pork Noodle Soup ($9.25) is made with slices of roasted pork, shiitake mushroom, fried onion, scallion, corn, half-boiled egg, sesame, and wakame. You then have the choice of a Curry Broth or Tonkotsu Broth. You also have the option of Soba, Ramen or Udon noodles. I opted for the Tonkotsu with Ramen, and it was okay but nothing special. Presentation was lacking and it lacked the depth of flavor you find in better Ramen soups. 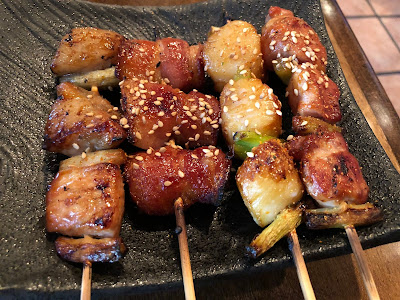 The Yakitori menu has 12 options ($3-$10 per skewer), and you order by the individual skewer, though there is a Combo plate available.  I tried the Matsusaka Pork, Oyster Mushroom Wrapped in Bacon, Scallop, and Chicken. I liked the barbecue sauce on each grilled skewer, with the nuttiness of the sesame seeds, and the meats and seafood were cooked well, being moist, tender and flavorful. A nice variety of flavor and textures, and I would like to try more of the skewers. 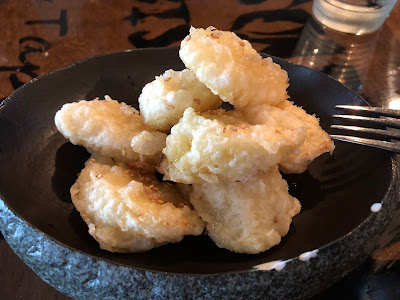 The Dessert Menu has 4 choices, such as Fried Ice Cream and Mochi, and I enjoyed the Fried Banana ($5). A nice, crispy light batter covered the sweet, slightly mushy banana pieces.

Sousaku is worthy checking out, though maybe their menu is too large and they might be better off concentrating on less. Service was excellent on both of my visits. I will be returning there to check out more of their offerings and would like to hear from anyone else who has dined there.
Posted by Richard Auffrey at 11:17 AM