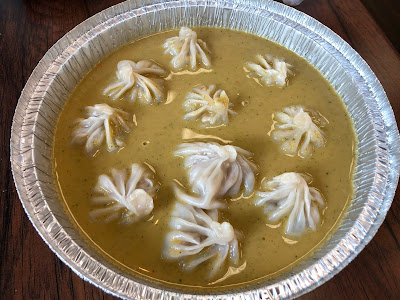 What is it about the pizza joints in Malden? I previously wrote about Classic Pizza, a typical pizza & sub restaurant but which also has a small, delicious and intriguing menu of Indian cuisine. You would never know from the outside that you would find inside tasty Chicken Tikka Masala or Paneer Pakora. Now, I've stumbled on another typical pizza and sub joint, Jay's Pizza & Ice Cream, which also is hiding a fascinating speciality.

Jay's is a tiny spot, with only a handful of tables and seats, but has a lengthy menu of the usual suspects, from pizza to subs, chicken fingers to calzones. However, you'll also note a small sign advertising Jhol Momos, a Nepalese dish. Who would ever have suspected this pizza joint would sell Nepalese dumplings? Maybe this is due to the recent change in ownership.

Momos are indigenous to South Asia, especially Tibet, Nepal, parts of India, and Bhutan, though the word itself seems to have Chinese origin, and simply means "steamed bun." They can be filled with a variety of ingredients, from yak to pork, chicken to vegetarian. Now, you can find momos in at least a few restaurants in the Boston area but Jay's offers a type of momo which is much less commonly found in the local area.

In Nepal, especially its capital Kathmandu, jhol momo are an extremely popular street food. "Jhol" roughly translates as "liquid" or a "liquid-like consistency," and the dish itself are momos in a cold broth. The broth may include ingredients such as sesame, garlic, tomato, onion, lemons and achar (an Indian condiment of pickled fruits and vegetables with spices). It may taste hot, spicy, sour and/or tangy, dependent on the specific ingredients and their ratios.

At Jay's, the Jhol Momo dish costs about $8-$9 and you receive 10 hot Momos in a cold broth. The dichotomy between the hot and cold was initially a little jarring, as it isn't a usual combination you find in many cuisines. You might get a room temperature sauce for other dumplings, but it is almost never a cold sauce. And even then, you can add as much or as little of the sauce you desire. In this case, the momos are sitting in the cold broth. However, after the initial trepidation, I found that the combination actually worked well.

The momos themselves possessed a fairly thin dumpling wrapper that had just the right amount of consistency, and they were filled with an ample portion of a tasty pork and spice mixture. You can also opt for chicken or vegetation momos. On their own, the momos make an excellent dumpling. Now, the cold broth was intriguing, with a strong and complex curry taste, and it added to the flavor of the momos. The broth seemed to have lowered the temperature of the momos, transforming the hot dumplings into a dish that worked well on a hot summer day. Highly recommended.

So what other Malden pizza joints are concealing special culinary treasures?
Posted by Richard Auffrey at 10:10 AM

You might get a room temperature sauce for other dumplings.
compare Gatwick parking