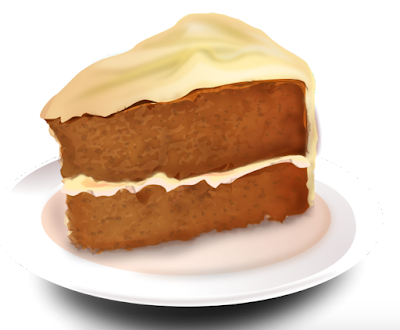 Are you a fan of Carrot Cake? I enjoy carrot cake, though I'm not crazy about the creamed cheese frosting that usually is slathered atop it. I'd like to see more versions of carrot cake that use a different type of frosting.

Carrot cake is basically a spice cake that has been flavored with carrots, which provides sweetness to the cake, as well as an element of moisture. It commonly also has chopped nuts in it, and sometimes ingredients like raisins or shredded coconut.

According to the World Carrot Museum, the origins of carrot cake extend back to the Middle Ages. As their website states, "It looks like it did evolve from the Carrot Pudding of medieval times, during the middle ages sugar and other sweeteners were difficult or expensive to come by in Britain and carrots had long been used as sugar substitutes." Actual carrot cake extends back to at least the late 18th century. However, creamed cheese frosting didn't unite with carrot cake until the 1960s.

What is the first American source to reference carrot cake? According to the Encyclopedia of Jewish Food, by Gil Marks, "The term carrot cake made its first appearance in an American source in The Neighborhood Cook Book by the Council of Jewish Women (Portland, Oregon, 1912), along with a Jewish-style carrot pudding." This appears to be the most authoritative source on this issue, often quoted on other sites discussing the history of carrot cake. However, as my own research has revealed, this source is actually incorrect.

The first edition of The Neighborhood Cook Book was published in December, 1912, with a second revised and expanded edition published in 1914. Their original recipe for carrot cake stated, "One-half pound sugar, one-half pound almonds, blanched and chopped, one-half pound carrots, boiled only till they can be grated, juice and grated rind of one lemon, four eggs. Cream the yolks and sugar; whites beaten to snow, added last; add three or four bitter almonds; beat for one half hour before adding whites of eggs. Butter spring form and sprinkle with grated zweibach. Bake in a moderate oven one and one-quarter hours, till loosed from pan."

Through my research of some newspaper archives, I found a number of sources concerning carrot cake that predate the publication of this cookbook in December 1912. First, The Detroit Times, December 19, 1908, had an article about doctors in London living on a diet of carrots, including "carrot cake." This is indicative that American readers were at least familiar with carrot cake, though the article is discussing London.

Second, the Norwich Bulletin, November 19, 1909, has an advertisement for the Haile Club restaurant, in Connecticut, which mentions "carrot cake" on their menu. So, we then see that at least one American restaurant was serving carrot cake, and there isn't any indication that this is a unique occurrence. There isn't any explanation of "carrot cake" either, so they seem to assume that readers would understand what they meant.

Third, The Baltimore Sun, October 2, 1910 published an article, Ways Of Cooking The Carrot, and it included a recipe for Carrot Cake, though it warned, "Carrot cakes are not so wholesome a way to serve carrots, but may be tried for a change, and they taste very good." The recipe is very simple, and not like the usual carrot cake recipes that would soon become popular. The only ingredients that are needed are carrots, salt, pepper and butter, and the mixture is fried in butter and lard.

Fourth, San Francisco Call, February 25, 1912, has a letter from a woman seeking a recipe for a "good carrot cake."

Fifth, The Buffalo Times, February 19, 1911,  provided a more recognizable carrot cake recipe, and the ingredients included carrots, sweet milk, sugar, lemon, soda, butter, and flour, although the recipe didn't give any cooking directions, such as time and temperature.

Sixth, another carrot cake recipe was in The San Francisco Call, September 15, 1912, which also provided a number of other carrot recipes. This is a more extensive recipe, calling for ingredients including chocolate and walnuts, with the option of raisins. However, once again, the recipe didn't give any cooking directions, such as time and temperature.


And finally, there is a another reference with a more recognizable carrot cake recipe. The Honolulu Star-Bulletin, December 21, 1912, printed a recipe for "Crocus Carrot Cake," which was sourced from the Ladies Home Journal. I'm not sure why "crocus" is used in the name as that plant has nothing to do with the recipe. Though this recipe appears to be simultaneous with the The Neighborhood Cook Book, the original recipe appeared in the Ladies Home Journal, November 1912, predating the recipe from The Neighborhood Cook Book.

It's fascinating what information you can find in newspaper and magazine archives.

What restaurant or bakery serves your favorite Carrot Cake?

(Note: This article was expanded/revised on May 2 as I uncovered more early references to carrot cake.)
Posted by Richard Auffrey at 9:01 AM