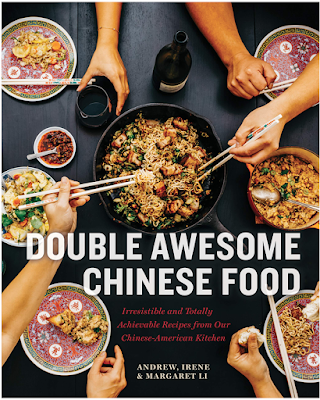 '‘Mei Mei” means little sister in Mandarin - our restaurant is an expression of our favorite childhood eating experiences as Chinese-American kids growing up in Boston.
--Mei Mei restaurant website

Mei Mei might be most well known for their Double Awesome, a sandwich made with a scallion pancake and stuffed with two oozy eggs, Vermont cheddar, and local greens pesto. I've certainly enjoyed the Double Awesome and it's convinced me that more sandwiches should be made with light and flaky scallion pancakes. I first encountered Mei Mei when they were a food truck, and they also now have a brick-and-mortar restaurant in the Audubon Circle area of Boston. They've recently taken the new step and written a fascinating cookbook so that you can recreate some of their favorite recipes at home.

I strongly recommend you check out Double Awesome Chinese Food: Irresistible and Totally Achievable Recipes from Our Chinese-American Kitchen by Andrew, Irene and Margaret Li (Roost Books, February 2019, $35.00), a hardcover of about 240 pages. Andrew, Irene and Margaret are the sibling co-owners of Mei Mei, and Andrew named the company after his "little sisters." Their food truck opened in 2012 while their restaurant opened a year later.

One of the most compelling aspects of these siblings is the important values they embrace, seeking to source many of their ingredients locally, and opting for many sustainable choices. In addition, they seek to treat their employees very well, getting them invested in the future of their restaurants. Their website has much more information on these important aspects and I urge you to read more about their passionate efforts and philosophy.

Their new cookbook, broken down into an introductory section and eight chapters, has over 100 recipes, ranging from Apple Hoisin Sauce to Oolong Panna Cotta. The introductory section, Cooking At Home The Mei Mei Way, explains the six main concepts of sourcing and cooking that guide Mei Mei, such as 1. Buy Good Meat and 5. Eat Everything Edible. They follow up with advice for home cooks, including suggestions on kitchen equipment and pantry ingredients, especially Asian ones. All good advice for anyone who wants to create the recipes within the rest of the book.

The recipes are generally Asian inspired, with their own creative twists, so though you will find a recipe for Traditional-ish Pork Dumplings, you'll also find Beef & Blue Cheese Dumplings and Sweet Potato, Feta & Brown Butter Dumplings. There is a sense of whimsy to the recipes, but grounded in well-crafted dishes that taste delicious. Many of the recipes are relatively easy to create, and the more difficult ones have ample directions and photos, such as the section on Dumpling Making. You'll also find how to create the Double Awesome, which includes recipes to make Scallion Pancakes and the Local Greens Pesto.

The cookbook has a diverse variety of recipes, some that showcase vegetables while others showcase meat and seafood. There is something for all food preferences. There are plenty of photos scattered throughout the book, illustrating the various dishes as well as showcasing the Li siblings. A few of the recipes which especially intrigue me include Sesame Ssam Fang Brisket Lettuce Wraps, Coconut-Dashi Clam Chowder, and Jjajang Lamb Noodles. I'm sure you'll find different dishes that will intrigue you.

Some of the recipes are tools, which home cooks can use to create their own recipes or alternate versions of the recipes within the cookbook. For example, the first chapter, Our Favorite Pantry Recipes, consists of various sauces, dressings and oils which are versatile, and can be used in plenty of your own dishes. Other recipes such as their Rice Porridge and Traditional-Fish Pork Dumplings are templates where home cooks can easily put their own spin on such dishes.

Chapter 7, From The Ocean, is all about seafood and I found something in this chapter which both surprised and impressed me. As I written about before, seafood cookbooks far too often provide recipes that require a specific type of fish, and this is an obstacle to sustainability. Recipes shouldn't specify the fish type but be more generic, such as a "light, flaky whitefish" instead of "cod." The idea is to encourage home cooks to seek outside the most common seafood species, and put less pressure on those seafood populations. These are so many different types of fish that are delicious but most consumers don't consume them because their recipes don't include those different fish.

The Mei Mei cookbook doesn't fall into this trap, and provides a number of recipes calling for more general fish ingredients. For example, their Red-Cooked Fish recipe calls for "firm white fish fillets" and their Fish With Fennel, Cilantro & Sesame Oil recipe calls for "fillets of a relatively firm fish like salmon or barramundi." This is part of Mei Meis commitment to sustainability and I'm glad to see they've taken this route.

Overall, I highly recommend the Double Awesome Chinese Food cookbook. Lots of creative recipes, most easy to make, and a strong emphasis on sustainability and local ingredients. At Mei Mei, they take those matters seriously and it's not a surprise those values came through in their cookbook. If you've ever enjoyed a Double Awesome at Mei Mei, then this is a cookbook you should own. If you've never had a Double Awesome, buy this cookbook so you can make it at home. And you should also go to Mei Mei to experience one.

"For us, food is happiness, entertainment, adventure, education, enjoyment, and love. We look forward to sharing it with you."
----Mei Mei restaurant website
Posted by Richard Auffrey at 3:00 AM