When people are seeking a less expensive alternative to Champagne, I often recommend they check out Crémant d'Alsace. I've celebrated numerous occasions with Crémant, including my recent 12th Anniversary of The Passionate Foodie blog.

In the Alsace region, they have been producing sparkling wines since the early 19th century but it was not until 1976 that the Crémant d'Alsace AOC was created. The AOC has strict regulations on viticulture and viniculture, and six grapes are permitted including Pinot Blanc, Riesling, Pinot Gris, Auxerrois Blanc, Chardonnay, and Pinot Noir. Most of their Blanc de Blancs is made from Pinot Blanc while Pinot Noir is the only grape permitted in their Rosé.

Crémant is produced by the méthode Champenoise, and the term "crémant" basically means "creamy" and originally referred to sparkling wines that were produced with less pressure, which tended to make them taste more creamy than effervescent.

As I've said multiple times before, "Americans need to drink more Crémant d'Alsace, and in fact, they need to drink more wines, of all types, from Alsace. They often provide excellent value and taste. They are enjoyable while young but can also age well. They can provide a sense of history, as well as showcase state of the art wine making. They pair well with a diverse variety of foods and cuisines. And at their most basic, they are absolutely delicious."

When was the first Crémant d'Alsace exported to the U.S.?

The Dopff au Moulin winery invented Crémant d'Alsace in the beginning of the 20th century when Julian Dopff started to use the méthode Champenoise to create sparkling wines in Alsace. Julien's son, Pierre, would later assist in the creation of the Crémant d'Alsace AOC in 1976. In my researches, the earliest mention I found of Crémant from Alsace in the U.S. is from the Chicago Tribune, December 27, 1950. There was an advertisement for "Dopff French Dinner wines" which include "Vin Gris, Crémant, Sylvaner." These wines were priced at $1.49 each, or 3 for $4.00. In comparison, the same ad offered bottles of Champagne, including Moet & Chandon, Pol Roger Brut, and Piper Heidsieck, for $3.59 a bottle.

I'm still seeking additional information on the earliest imports of Alsace Crémant, and will report back when I learn anything new.

Over the course of almost the next thirty years, there were only a tiny amount of brief references to Crémant in the newspapers. The Port Arthur News, November 5, 1977 (TX) was the first newspaper article I found that provided a bit of educational information about Crémant in a lengthy article on French Champagne. The article stated, "Crémant is a very fine, very light vin mousseux that is only partly sparkling. There are presently three cremants--all made by the method champenoise--that are entitled to appellation controlee. They are Crémant d'Alsace, Crémant de Bourgogne, and Cremant de Loire."

It's interesting to look at some of the prices from the early 1980s. For example, The San Francisco Examiner, September 23, 1980 printed a wine store advertisement mentioning Pierre Sparr Crémant d'Alsace Brut for $7.59. Compare this price to two Champagnes, including Moet & Chandon White Star Extra Dry for $11.99 and Laurent Perrier Cuvee Speciale Brut for $12.99. The Berkshire Eagle, October 31, 1983 (MA) listed an ad for Dopff Crémant d'Alsace Brut at $6.99 while Korbel Brut, from California, cost $7.89, and Perrier-Jouet Brut, a Champagne, cost $15.99.

I recently received two media samples of Crémant d'Alsace, from two different wineries, and once again, I was impressed with their quality, complexity and deliciousness. And as both are priced at least than $25, they are also excellent values. 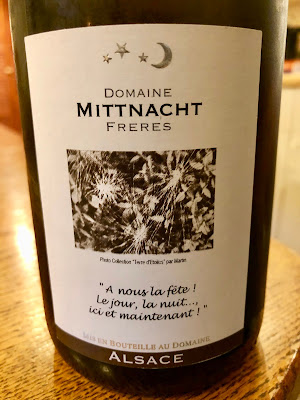 Domaine Mittnacht-Freres, which extends back to 1958, is a family-owned estate. In 1963, the two brothers André and Louis Mittnacht merged their vineyards and currently, the estate is led by Christophe and Yuka Mittnacht. Christophe was an early pioneer of Biodynamics, and their 20 hectare estate has been Demeter certified since 1999, once of the first in Alsace to receive that certification. Wine production is also conducted with minimal intervention. They produce a number of wines, including Grand Cru, Late Harvest, and Crémant.

The NV Domaine Mittnacht-Freres Crémant d'Alsace Extra Brut (about $23) is produced by an intriguing blend of 60% Pinot Auxerrois, 10% Pinot Blanc, 10% Riesling, 10% Pinot Gris, and 10% Pinot Noir, all from 25+ year old vines. The wine, with a 12% ABV, was aged on the less for about 18 months. With a light golden color, and plenty of tiny bubbles, this Crémant is bone dry, with high acidity, and intriguing subtle tastes of green apple and peaches, and an underlying steely minerality. Elegant and delicious, this would be a great pairing with oysters or fried foods, as well as even a simple bag of potato chips. 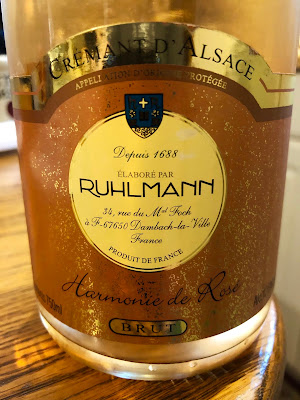 The history of the Ruhlmann Winery reaches back hundreds of years to when ancestors of the Ruhlmann family, who were Hungarian knights, settled in the central Alsace back in 1688. The estate now includes approximately 75 acres, with two Grands Crus (Frankstein and Muenchberg) and two Lieu-dit sites. The winery produces five different lines of wines, from Cépage to Cave Précieuse, using grapes such as Auxerrois, Chasselas, Sylvaner, Pinot Blanc, Pinot Gris, Riesling, Muscat, Gewurtztraminer and Pinot Noir. I've previously reviewed a couple of their wines.

The NV Ruhlmann Crémant d'Alsace Harmonie de Rosé (about $20) is made from 100% Pinot Noir and has a 12.5% ABV. With a pleasing, rich pink color, lots of tiny bubbles, and a compelling nose of red fruits, this is a Crémant Rosé sure to please. It is dry and elegant, with crisp acidity and a delicious blend of strawberry, raspberry and citrus flavors. A fairly lengthy finish satisfies too. Pure pleasure on the palate. This wine can be enjoyed on its own, though it will pair well with a variety of foods as well.

Drink More Crémant d'Alsace!
Posted by Richard Auffrey at 10:02 AM