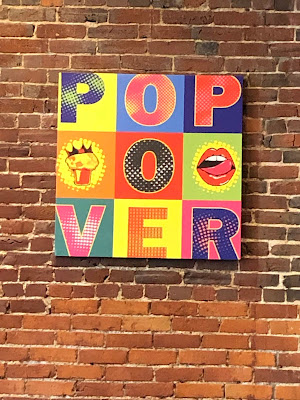 Popover: A flaky, crusty roll made from egg batter and often cooked in muffin tins. When I was growing up, it seemed that many restaurants served popovers and I loved them. My mother also made popovers at home, which were a special treat. Then, they seemed to almost vanish from the restaurant scene, relegated mainly to more "old-fashioned" restaurants. However, they've been returning, and creative chefs have transformed and elevated them, such as Chef Lydia Shire's Lobster Popover.

A few places now specialize in popovers, including Popover King and The Popover Lady. Recently, I stopped at both spots, to compare their Cheese Popovers. Plus, I checked out a couple other items at Popover King, as it is the newest popover spot in the area. My biggest takeaway from my comparison of the two places? I need to return to both of them to check out more from their menus. Their Cheese Popovers are very different, and your preference will depend on the style you like better. 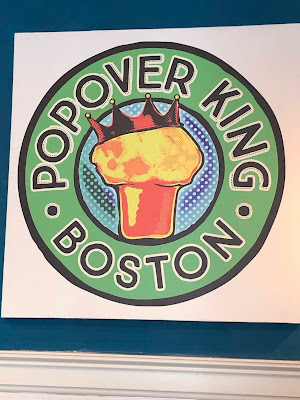 "POP-OVERS---Stir together one cup of flour, one of sweet milk, one of beaten egg, and butter the size of a walnut. Bake in small tin rounds--and they will be excellent for breakfast cakes."
--The Sunbury Gazette, February 11, 1860 (PA).

Located in the West End of Boston, Popover King has only recently opened and it is a small cafe where you order at the counter and then sit down and wait for your food and drink. It's a casual spot with a welcoming vibe, and the counter staff is quick to offer assistance. 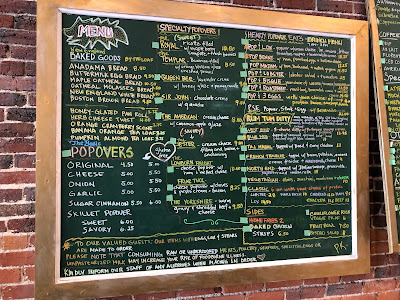 The Menu has plenty of options, including New England baked goods like Anadama Bread and Boston Brown Bread. There are five main types of popovers, including Original, Cheese, Onion, Garlic and Sugar Cinnamon, priced at $4.50-$5.50, though if you buy three, you get one free. The popovers can also be ordered gluten-free. There is also a list of Specialty Popovers, priced $8.25-$10.00, which are basically filled with a variety of sweet or savory ingredients. For example, the Sir John has chocolate creme and ganache while The Yorkshire has shredded beef, warm gravy and cheese. A Brunch menu has even heartier dishes, from Pop & Lox (popover with lox and cream cheese) to Pop & Lobster (lobster salad & tomatoes). 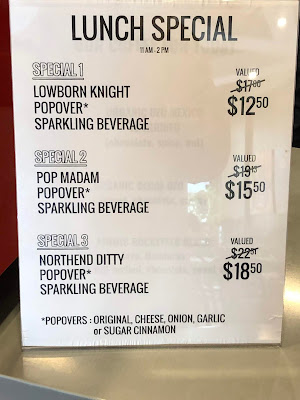 During lunch, you'll find three Specials, the discount which basically give you a free Popover, saving you an average of $5.00. I ordered the Special #1 ($12.50), which included the Lowborn Knight, and I selected the Cheese popover. The cheese popover came split open, with plenty of melted cheese atop it. The popover was cooked just right, with a flaky and crusty exterior and an almost spongy, eggy interior. All of the cheese added another tasty element and went well with the popover. They didn't skimp on the cheese. I'm more used to popovers where the cheese is baked into the popover but this worked quite well, and I would definitely recommend it. 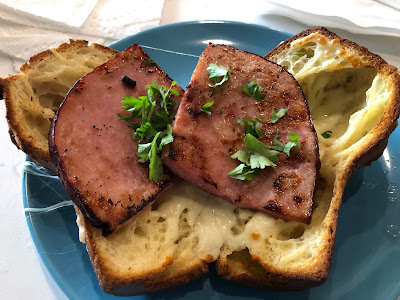 The Lowborn Knight is a cheese popover with two slices of ham atop it. Almost a ham & cheese sandwich, and you could eat it that way if you wanted. 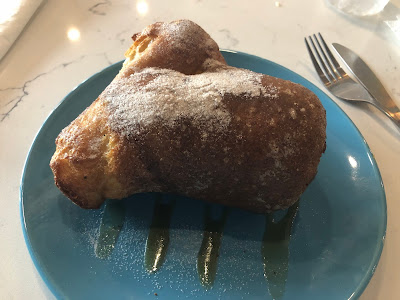 I ended my lunch with a Sugar Cinnamon Popover, which made for a delicious dessert, with just the right amount of sweetness to complement the eggy popover. Unfortunately, they apparently forgot to bring me this popover when it was ready so, after close to ten minutes, I went up to the counter to remind them and they immediately then brought it out. 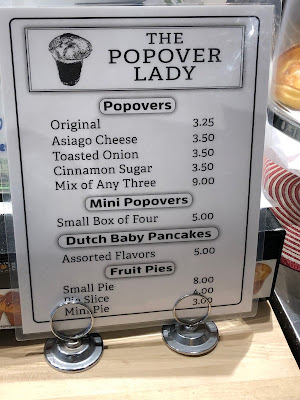 "POP OVER CAKE--The following is the recipe for making the justly celebrated pop-over cake. It is said it is well worth a trial. One cup of milk, one cup of flour, one egg, a little pinch of salt; increase in proportion to the family."
--Vermont Chronicle, July 9, 1870

At the Boston Public Market, you'll find The Popover Lady, who also offers a variety of Popover treats. Their basic popovers, available in Original, Asiago Cheese, Toasted Onion, and Cinnamon Sugar, only cost $3.25-$3.50. You'll find other Popover treats as well, though for this visit, I just wanted to taste their Asiago Cheese popover. 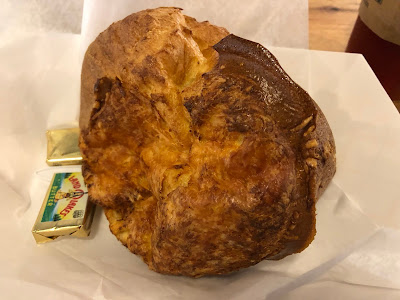 Their Asiago Cheese popover is more similar to the type of cheese popovers are most used to, and it delivered on taste. The exterior was crusty and flaky, with a delightful eggy interior, enhanced by the ample amount of Asiago baked into it. It brought back childhood memories of the type of popovers I once used to enjoy. And it makes me want to sample more of the popovers from this spot.

So which Cheese Popover was the winner of this comparison test? It's a tough decision as both were excellent as well as very different. I would order either one of them again. Both also earn my hearty recommendation. If I must choose though, I'll opt for the the Asiago Cheese Popover from The Popover Lady,

"CORN POPOVERS--1 pint of sweet milk scalded; stir into the hot milk a coffee-cup of cornmeal, butter half the size of an egg, little salt, 3 eggs well beaten and stirred in the last thing; no soda."
--Galena Miner, Jul 17, 1879 (KS)
Posted by Richard Auffrey at 3:00 AM