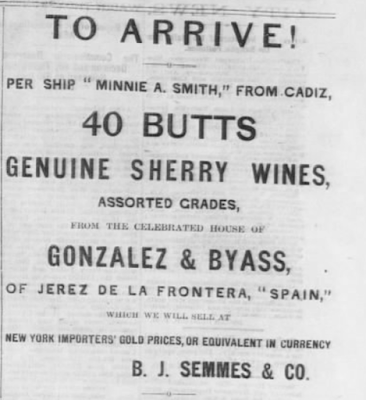 Copy of a newspaper advertisement from the Memphis Daily Appeal, September 18, 1869

It's time for more Vermouth! After yesterday's selections from California, we now turn our eyes to Spain, and more specifically to the famed Sherry region, a place very dear to my heart. A year ago, I reviewed the Gonzalez Byass La Copa Red Vermouth and I concluded that, "This is a Vermouth for Sherry lovers, wine lovers and cocktail lovers, earning my highest recommendation." For more information about Gonzalez Byass, please review my prior post.

"..the world renowned sherry house of Gonzalez Byass of Xeres, purveyors to King Alfonso, the enormous casks telling the fruitful story of the golden beads within."
Boston Daily Globe, December 19, 1883 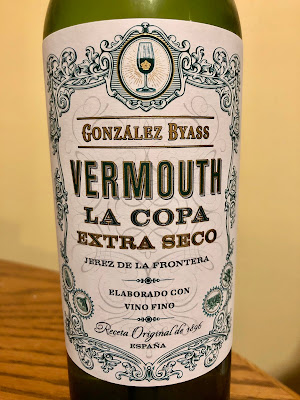 "The most delicious of 'natural' sherries, free from all charge of 'brewedness,' free from all charge of over strength, with a taste as delicate as claret and as distinct as Burgundy, a tonic, a refresher, a stomachic, a cure of biliousness and gout, and most of the ills that flesh is heir to, is the so-called Tio Pepe."
The New York Times October 16, 1887

Besides their Red Vermouth, Gonzalez Byass also produces an Extra Seco Vermouth, and I recently received a media sample. This is an extra dry, white Vermouth that is produced from a selection of Tio Pepe Fino Sherries which have been aged for an average of three years in American oak. As you can see from the newspaper quote above, Tio Pepe has a long and illustrious history as a fine Sherry. The first Tio Pepe Fino was bottled in 1844, and it was also the first trademark in Spain. Tio Pepe is made from 100% Palomino, the primary grape used to produce Sherry.

"Immense quantities of vermouth are used in the United States. Vermouth is half of a Manhattan cocktail and nearly all of a vermouth cocktail. It is drunk clear sometimes, and enters as a flavoring into many mixed drinks."

Gonzalez Byass used to produce Vermouth from 1896 to 1926, and their new versions are firmly based upon the old recipes. Thus, the Extra Seco Vermouth has strong historical roots. In addition, this Vermouth also possesses elements of terroir, a sense of place, as it is clearly a wine of the Sherry region. When you taste either of their two Vermouths, you can distinctly detect a Sherry aspect, and you feel a sense of southern Spain. This isn't Vermouth that can come from anywhere else. It is so specific to this wondrous region.

The Gonzalez Byass La Copa Vermouth Extra Seco, which has a 17% ABV, was produced with numerous botanicals, including wormwood, savory, clove, and cinnamon. In addition, some red fruits were added "to achieve a long and persistent balsamic aftertaste." All you have to do is to smell this vermouth and it will remind you of a Fino Sherry. On the palate, it is bone dry, like a good Fino, with a compelling blend of flavors, including citrus and peach, herbal notes, and a hint of bitter. It is fresh and elegant, with a pleasant mouthfeel and a long, pleasing finish. It would be easy to drink this on its own, simply slightly chilled. However, it also is delicious over ice with some club soda, and would make an excellent addition to a cocktail, though I'd suggest you make it the star ingredient of the cocktail rather than in a supporting role.

I also re-tasted the Gonzalez Byass La Copa Red Vermouth and it was equally as good as it was last year. So, I should now reword one of my comments at the top of this article. "These are both Vermouths for Sherry lovers, wine lovers and cocktail lovers, earning my highest recommendations."

"American consuls at cities in the vermouth-producing regions have recently been asked to find out of what this liquor is composed....It is thought perfectly feasible to make vermouth in this country, and it was with an idea of helping such a project that the consuls made their report."
--The Buffalo Commercial (NY), July 20, 1899
Posted by Richard Auffrey at 3:00 AM