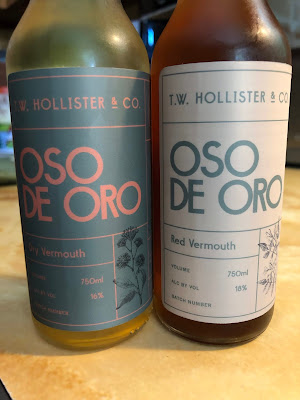 "The French vermouth is a very different thing from the Italian, and much more popular. Within a few years the demand for the liquor has greatly increased, partly because the cocktail habit has steadily grown and vermouth enters into nearly all cocktails."
--The Morning Call (PA), June 6, 1890

In a number of respects, Vermouth is the Rodney Dangerfield of the wine world, not getting sufficient respect. Many people don't even realize that it's a wine, thinking it's only a minor ingredient in cocktails. That needs to change and Vermouth needs to be respected and loved for all that it can offer. With all of the new artisan Vermouths that are now being produced, there is so much to taste and enjoy.

As I've said before, "It's a wine with a fascinating history that extends back thousands of years...It can be delicious and complex, intriguing and diverse, and offers a template upon which a producer can put their individual stamp." Vermouth is a fortified and aromatized wine, which works well in cocktails but also can be enjoyed on its own, maybe with a ice cube or two. The intriguing complexity of some Vermouth makes it a compelling wine on its own. Fortunately, there are numerous producers taking Vermouth seriously, creating some unique and fascinating Vermouths, from a wide range of base wines and botanicals.

"Furthermore, the habit has grown of serving before a heavy dinner a glass of vermouth and bitters."
--The Morning Call (PA), June 6, 1890:

Back in 2010, I wrote an article about Carl Sutton, formerly of Sutton Cellars and who is now consulting on a number of endeavors. Back then, he had just come out with a Vermouth, and Boston was the second market, after San Francisco, for this new product. "Carl's vermouth was inspired in part by the Italian Amaro, a herbal liqueur. His vermouth contains 17 ingredients besides white wine, and he would only tell me that two of the ingredients were chamomille and dried orange peel." In addition, its creation was a lengthy and complicated process. "It took plenty of experimentation for Carl to get his vermouth as desired. The timing of the infusion was very important to the end flavor of the product. Eventually, he determined the best way was to first produce the wine, then fortify it and finally then do the infusion. It was difficult as there is little written about how to make vermouth, and producers keep their methods and processes secret."

I was impressed with his Vermouth, which possessed such a complex and enticing herbal flavor, and would commonly drink it with some club soda and ice. It was a refreshing summer drink and it was a bit sad when it was no longer available locally. However, Sutton has returned to the world of Vermouth and that is excellent news. With his clear passion for Vermouth, it's not surprising that he returned to it.

"Although Italy is the largest wine producing country in the world, the importation of Italian wines and cordials into the United States is comparatively limited. In the past ten years the increase in importation of wines and cordials from Italian ports has amounted to nearly 200 per cent. This gain, however, is not due to any increasing popularity of Italian wines among American consumers,.."
--The Sun (NY), December 30, 1895

A new wine label, T.W. Hollister & Co., has recently launched in Santa Barbara, California, and possesses a strong historical connection. The company is led by Clinton Kyle Hollister, a descendant of William Welles Hollister, a rancher and entrepreneur who had a major impact on the development of the Santa Barbara region. One of their initial products is Vermouth, including both a Dry and Red Vermouth. It's certainly unique to find a new wine label which begins its production with Vermouth.

The creation of this Vermouth is due to a partnership of three men, including Clinton Kyle Hollister, and his childhood friend, Jesse Smith of Casitas Valley Farm. Jesse and Carl Sutton eventually bonded over Vermouth and Carl was brought on board for this project as well. They decided to produce French-style and Italian-style Vermouths, which they simply label as Dry and Red. It is also important to them that they use as many local botanicals as possible, including some that grow on the Hollister Ranch. They source their wormwood from Sonoma, as it is a milder version than many other American wormwoods. I received media samples of their two Vermouths, and they lived up to my expectations.

The T.W. Hollister Oso de Oro Dry Vermouth ($37) begins with a base of "quality white wine" and is macerated with a blend of 12 botanicals that include orange peel, wormwood, chamomile, rosehip, and hyssop. It has a 16% ABV and only 1000 bottles were produced of this batch. I felt the touch of Carl Sutton in this Vermouth, as it reminded me of his own White Vermouth that I used to enjoy so much. The Oso de Oro was dry and light, with an intriguing melange of herbs, bright fruit, and a touch of bitterness. Nice acidity, a lengthy finish, and such a pleasing taste on the palate. It went down so easy.

You can enjoy this Vermouth on its own, though I loved it mixed with some club soda and ice. It would also work well in a cocktail though I'd suggest making it the star of a cocktail rather than as a minor ingredient. I'm thinking about mixing it in a cocktail with a nice Fino or Manzanilla Sherry. The Oso de Oro Dry Vermouth is perfectly refreshing and has such a delicious taste. Highly recommended!

"Of late vermouth has come to be a necessary ingredient in nearly every cocktail compounded at an American bar."
--The Sun (NY), December 30, 1895

The T.W. Hollister Oso de Oro Red Vermouth ($37) also begins with a base of "quality white wine" but is then macerated with a blend of 19 botanicals that include hummingbird sage, grapefruit peel, blood orange, vanilla bean, ginger root, and wormwood. Finally, they add some European caramel, sourced from a 5th generation family, to add texture, color and some sweetness. It has an 18% ABV and only 1000 bottles were produced of this batch.

This vermouth had a mild sweetness, well balanced with its acidity, and a complex and enticing blend of flavors, with bright red fruit notes, intriguing herbal notes, and more prominent bitter notes. It also possessed a lengthy and satisfying finish, a medium-body, and would also work well on its own or in a cocktail. I also enjoyed this red Vermouth with just some club soda and ice. It would work well in a cocktail, and it would be great with a starring role, though it would excel as a co-star too. Highly recommended.

At a price of $37, this may not be an easy buy for some, especially those who don't have much experience with Vermouth. However, you should consider the fact that they are produced in a very small quantity, and have been well-crafted. They are complex, intriguing and delicious, and I consider the price very fair for the quality of this Vermouth. This isn't the Vermouth you stow away in a cabinet and let gather dust before you need it for a cocktail. This is a Vermouth to savor on its own, to enjoy its fascinating blend of botanicals. Expand your palate!
Posted by Richard Auffrey at 3:00 AM