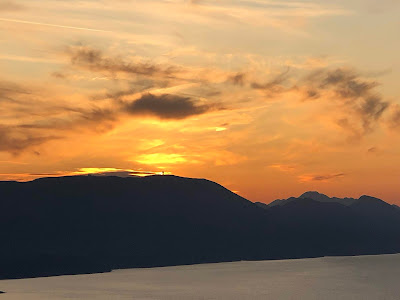 Sunset over the Pelješac Peninsula in Croatia, viewed from the Rizman Winery in the Komarna region. The natural beauty of Croatia is exquisite, from the mountains to the ocean, from the grape vineyards to the pebbly beaches. There is a special serenity accompanying these views, bringing with it an inner joy and a deeper connection to our natural world. Those living in more urban settings need to take time to visit such areas, to reclaim that connection. 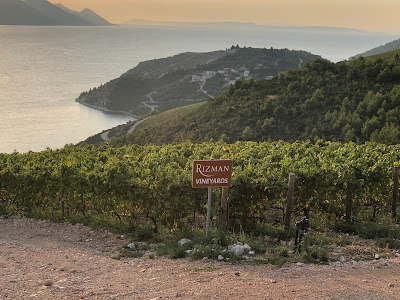 One of the primary objectives of my recent journey to the Republic of Croatia was to visit and explore the Komarna appellation, the newest wine region in Croatia. This region is occupied by the K7 Cooperative, an association of seven wineries, including Rizman Winery, Saints Hill Wines, Volarević Wines, Terra Madre, Modro-zelena, Neretvanski Branitelj and Deak Family Farm. As I've mentioned previously, the K7 Cooperative is working with the Boston-based Croatian Premium Wine Imports, which has recently started importing their wines to Massachusetts. This import company is owned by Win Burke and Mirena Bagur, husband and wife, and they were also our guides during our trip to Croatia. 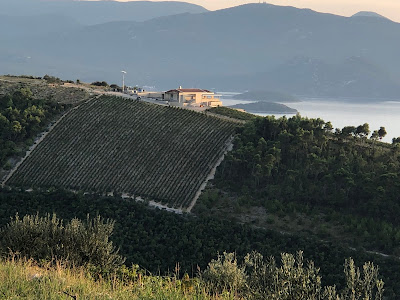 The Komarna appellation is located in Southern Dalmatia, in the Dubrovnik-Neretva County, along the coast of the Adriatic Sea and across the water from the Pelješac Peninsula. Komarna is about 97 miles south of Split and 47 miles north of Dubrovnik. And the drive from either of these two cities to Komarna is quite scenic. The region takes its name from the tiny village of Komarna, which has a population of less than 200, and is located on the coast of the Mali Ston Bay. 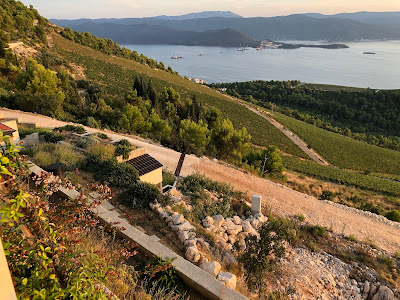 Before grape vineyards were ever planted in Komarna, olive trees were most commonly planted in this region, and olives are still grown here, used to produce delicious olive oil. In addition, this region was once a popular hunting region, with wild boars being one of the most popular types of game. In 2008, grapes were first planted in this area by the Rizman Winery, and five years later, in 2013, Komarna became a legally recognized appellation. 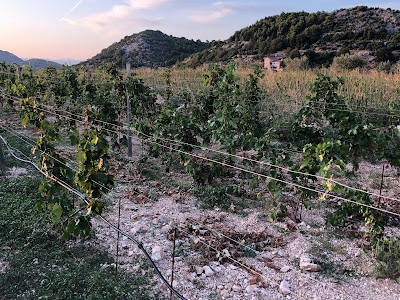 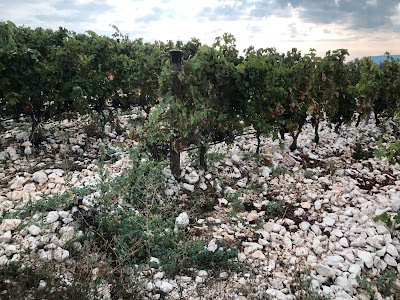 When you walk through the vineyards in Komarna, you'll see plenty of rocks, as much of the land in this area is limestone with small amounts of topsoil. Some of the larger rocky areas needed to be blasted to make the land amenable to planting vines, so it wasn't easy or inexpensive to create these vineyards. The vines need to create deep roots, so time is needed for those vines to best express their grapes. As the years pass, these vineyards will produce better grapes. 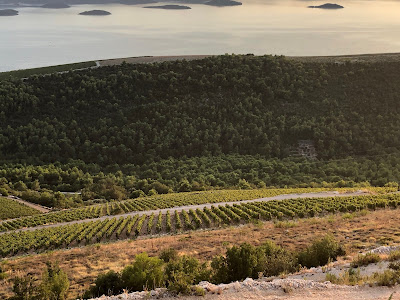 Most of the vineyards face south and southwest, and receive about 2600 hours of sunshine annually. The intense heat of this region means that irrigation is necessary, though the heat doesn't stop the grapes from possessing excellent acidity. The vineyards are located from sea level up to an altitude of about 750 feet, and you'll find some vineyards with as much as an incline of 30%, which makes tending to the vines, as well as harvest, laborious and difficult. These vineyards reminded me in some ways of the vineyards in the Douro region of Portugal. 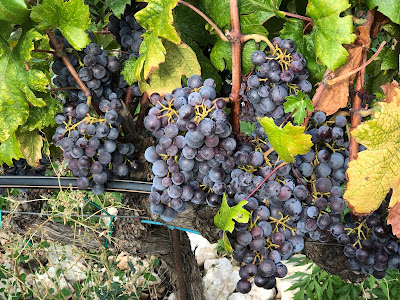 Komarna is the only Croatian appellation where all of the wineries are certified organic. This is an important stance and philosophy for all of the wineries in the K7 Cooperative, and extends beyond just their vineyards. Approximately 92% of their vineyards, which contain over 500,000 vines, are planted with indigenous Croatian grapes, including Plavac Mali, Pošip, Tribidrag, Maraština and Babic. Plavac Mali is the most planted variety, occupying over 60% of the acreage. A few international varieties, usually used as blending grapes, are grown as well, such as Cabernet Sauvignon, Chardonnay, Syrah, Tempranillo, and Viognier. 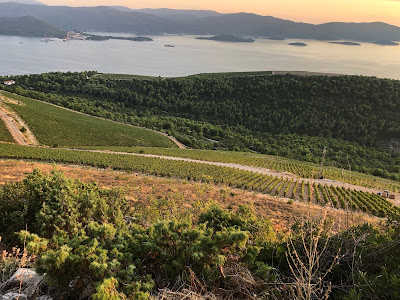 The Komarna region consists of approximately 200 hectares, with about 82 of them planted with vineyards and additional hectares planted with olive trees. The Rizman winery is the largest, with about 22 hectares of vineyards and 7 hectares of olive trees. There is little room for additional vineyard growth in Komarna, with the wineries generally indicating they only have potentially 1-3 additional hectares that they can plant. As such, this region will remain a relatively small production area, each winery producing less than 7000 cases annually, unless at some point they extend the boundaries of the appellation, which doesn't seem likely in the near future. 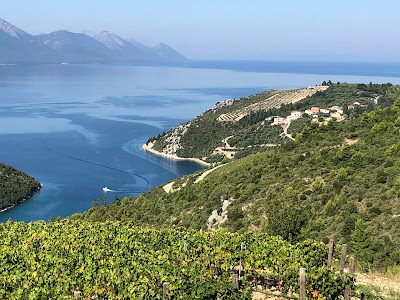 The unity of the seven wineries in Komarna is a significant strength, helping to promote the general interests of the region. As there are only seven of them, it relatively easy for them to work as a unity, and they basically agree on all major decisions. For example, they all agreed to maintain organic vineyards throughout the region. In addition, they share information together, assisting each other with issues in the vineyards and in the winery. They can share their experiences with growing Plavac Mali, helping each other improve the quality of their grapes and wines. They are more akin to collaborators, and as Mihovil Rizman stated to me, "If you have quality, you have no competition." 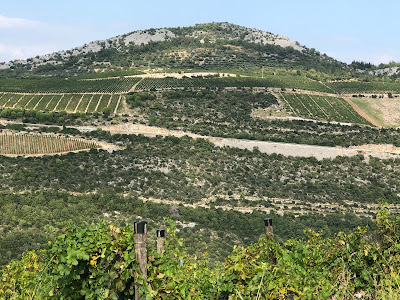 A few of the wineries haven't yet started producing wine, but should in the near future. I tasted many of the Komarna wines that are currently available and overall, I was impressed with their quality, especially considering the youth of this region. I found the winery owners and winemakers to be sincerely passionate about their endeavors, and they certainly are driven to continue learning and improving their wines. Additionally, the different wineries shares commonalities, similar vinous philosophies, indicative of their basic unity. They are all also looking to the future, thinking of various ways to attract more wine consumers. 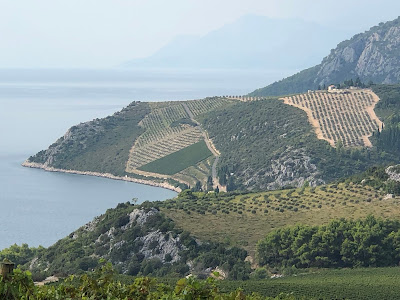 The diversity of the wines I tasted, Whites, Rosé and Reds, was compelling, especially the various expressions of Plavac Mali wines I encountered. Plavac Mali is a red grape that is worthy of attention. The Komarna wines were food friendly, wines which would appeal to almost any wine lover. There were easy drinking wines, great for everyday drinking, while there were also intriguing, complex wines which would brighten any special occasion. As I tasted a significant amount of Croatian wines from other regions besides Komarna, I can make some comparisons, and believe that the Komarna wines certainly hold their own against any other region. It's also fascinating that the quality of the Komarna wines will only continue to improve with more time. There is such great potential in this newest region and I can't wait to see what happens there in the next few years. 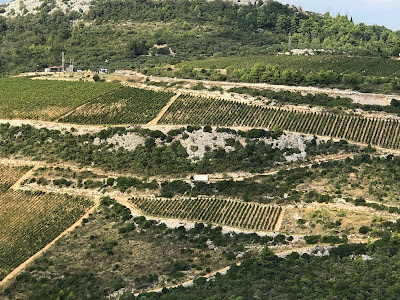 Currently, about 6,000 bottles of wines from Komarna have been exported to the U.S., and that number will grow each year. In the near future, additional tasting rooms will be constructed, and they will then all be joined by a wine trail. There are also plans to open a wine hotel at some point, desirous of promoting wine tourism, to keep visitors in the region for more than a single day. I also learned about a few future plans which I cannot yet write about, but which sound exciting and I look forward to when I'm able to share information about those projects. 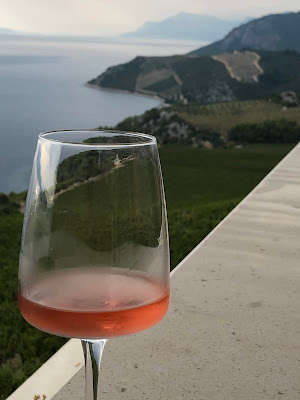 I believe the future is extremely bright for Komarna, and in the next couple weeks, I'll be writing, in detail, about some of the wineries of this region and the wines they are producing. And if you're in the Boston area, you can buy wines from the Komarna region at these restaurants and wine shops.
Posted by Richard Auffrey at 9:14 AM