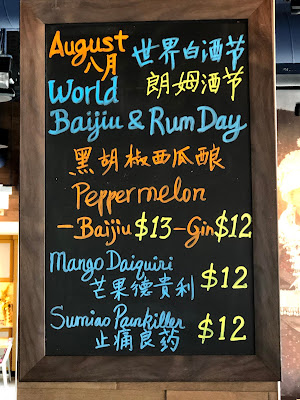 "But in the West, Hunan cooking is often confused with Sichuan cooking. In China these two cuisines have very distinct characteristics. Whereas Sichuan is known for the hot and numbing sensation from dried chiles and Sichuan peppercorns, Hunan flavors are hot and sour from pickled chiles and pickled vegetables, made by letting brined fresh ingredients ferment naturally."
--Phoenix Claws and Jade Trees: Essential Techniques of Authentic Chinese Cooking by Kian Lam Kho
Sumiao Hunan Kitchen, located in Cambridge, was founded in 2017, and from the beginning it has offered Baijiu and Baijiu cocktails on their drinks menu. For the last few years, it has also supported World Baijiu Day, which was celebrated this year on Monday, August 9. I dined there for lunch on Monday, to check out their new Peppermelon Baijiu Cocktail, and it also happened to be the start of Dine Out Boston, where Sumiao offers a special multi-course lunch for $25. 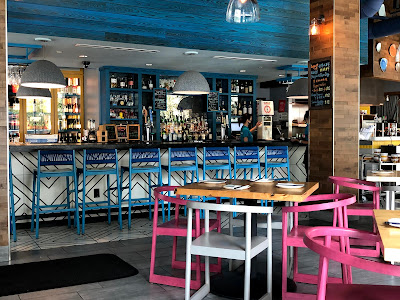 Sumiao Hunan Kitchen is the creation of Sumiao Chen, a pharmacologist at Novartis as well as a restaurateur who was previously involved in opening the Feng-Shui restaurant chain. Sumiao, which is a Chinese word meaning “sketch", was born in Xiangtan, a city in Hunan which was also the birthplace of Mao Zedong, and she received culinary training at Le Cordon Bleu. The restaurant offers many traditional Hunan dishes, as well as some of their own innovative takes. 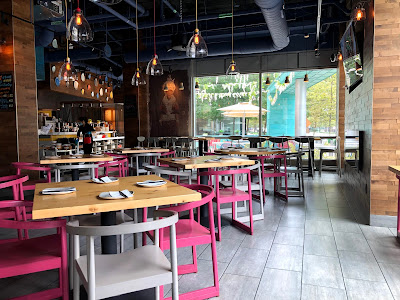 I've been a fan of the restaurant since the beginning, and wish I dined there more often than I do. It has remained consistently good over the last four years, and my recent lunch was as excellent as usual. For Dine Out Boston, they offer Lunch ($25) and Dinner ($38). Lunch is available from 11am-3pm, and you get four choices: 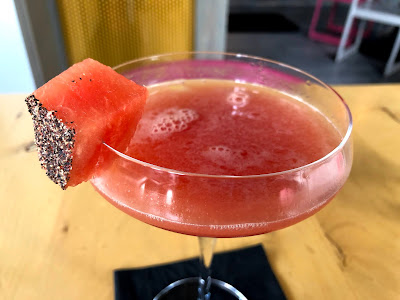 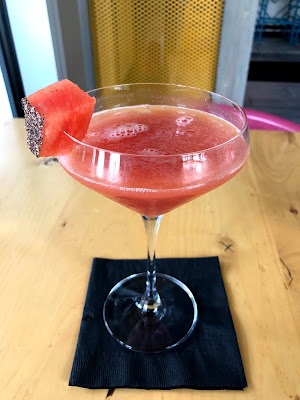 The new Peppermelon Baijiu cocktail is made with Baijiu, fresh Watermelon juice, black pepper honey syrup, and lemon juice. It has a mild sweetness, a rich watermelon flavor, a subtle peppery kick and the Baijiu comes out primarily on the finish. It's nicely balanced, perfect for the summer, and the components work very well with the Baijiu. Even if you claim to dislike Baijiu, this cocktail would appeal to you. And the peppered piece of watermelon on the rim of the glass was a nice treat once the cocktail was gone. 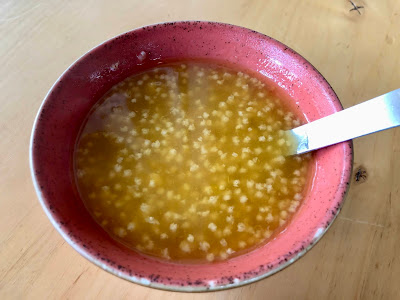 My lunch began with the Melted Gold soup, made from pumpkin and millet. It was hot and sweet, with a slightly thicker broth (although not too heavy) and the millet added a bit of texture. With a pleasing taste, it was a nice start to the meal. 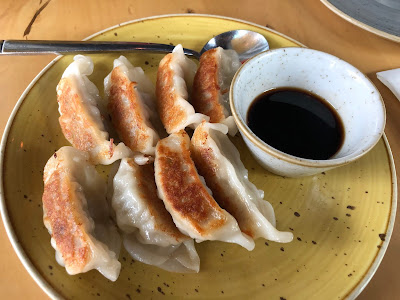 The Sumiao Gyoza, made from pork and accompanied by a vinegar sauce, ere plentiful and delicious, with a nice crispness to the coating and a meaty, well-seasoned filling. 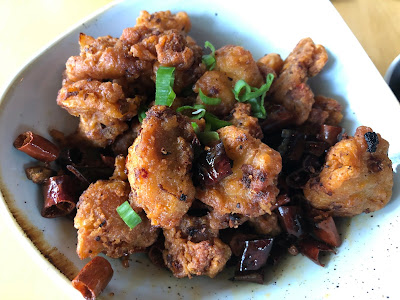 For my entree, I opted for the Spicy Popcorn Chicken, which comes in 3 levels of heat. I went for the medium-heat, and the chicken provided a numbing heat to the dish. The chicken had a crisp and light outer coating over the moist chicken meat. The dish too was fairly ample and delicious. 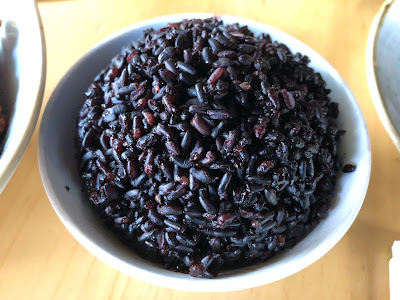 White rice comes with the lunch or for a $2 charge you can have some Black Rice, which is a bit nutty, almost a roasted flavor. 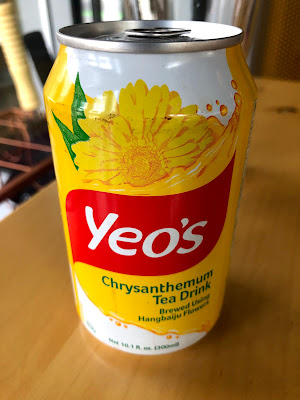 The Chrysanthemum Tea comes in a can, and is a sweet drink, with floral notes.
Dine Out Boston continues next week so consider dining at Sumiao Hunan Kitchen, and try one of their Baijiu cocktails.
Posted by Richard Auffrey at 8:33 AM