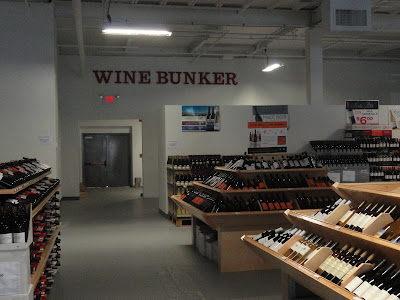 One of the most significant trends in local wine stores is the rise of discount wine stores, often warehouse-like places with very low mark-ups on their wines.  I think more of these stores will open in the near future, and such stores will then need to work hard to differentiate themselves from the competition.  Their low prices alone will not be a compelling enough reason.

The Wine Bunker, which just opened in Reading, is another of these discount wines stores and I dropped by recently to check it out.  Please remember that this store is brand new and I am offering only my initial impressions. Matters could change, and hopefully for the positive, over the next few months.

Back in August, I provided some preliminary information about this store, some of which has changed though nothing too significant.  Though the store has somewhat of a warehouse feel, it also has nice wooden wine racks and display units. It is spacious with a good amount of clear space between the aisles. To the back of the store, they constructed a tasting room, though I did not see it.  It should be large enough though for larger tastings, classes or private parties. 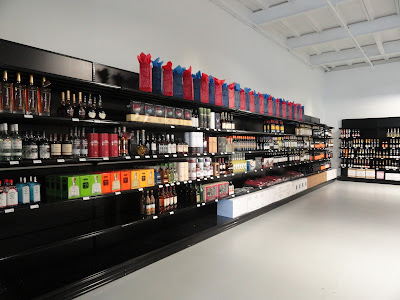 Though I was previously told they would only sell wine, they have decided to expand their selection to include beer and spirits. They still are adding to their spirits selection, though you should be able to find many of the most popular brands. I randomly looked at the price of their Grey Goose (750ml) to see how it compared to other stores. Wine Bunker had it for $32, which seemed a bit high to me.  I checked and found that Kappys carries it for $31, and has it on sale for $27. 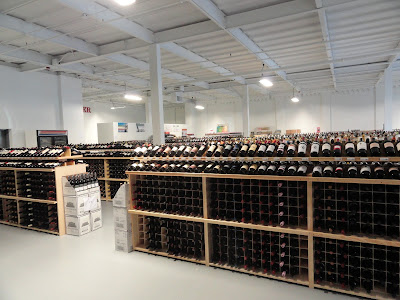 The store carries about 1000 wines and will be bringing in some more.  The wines are generally categorized by country or wine region, though they need some signage to indicate where each group of wines is located. Individual wines also mostly lack shelf talkers. Plus, I found the Spanish wines in two separate locations, though there was no apparent reason for the division.

Wine prices are discounted from what you will find at many regular wine stores, and often on par with other discount wine stores, though there is some variation.  For example, you will find the 2008 Caymus Cabernet Sauvignon for $58, an excellent price, though the 2008 Caymus Conundrum is $23.25, where other discount stores may have it for only $18. Though they had pondered offering a case discount, they chose not to go with it, which is typical for most discount wine stores.

The wine selection varies, with the most popular wine regions commonly have the best variety.  So there are plenty of California wines, from the most popular ones, to some less common but also compelling.  For example, they carry the 2008 Hirsch Vineyards Bohan-Dillon Pinot Noir ($27.25), which is an excellent wine, though not something found at many other discount wine stores.  You will also find some higher-end Cabernet Sauvignons, including Duckhorn, Heitz, and Caymus.  In addition, they have a good selection of wines from Washington and Oregon, and will be adding more in the future. The Pacific Northwest appears to be one of their passions, and a location where they feel is very good value. 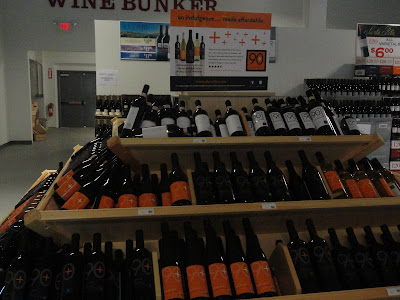 The Wine Bunker carries nearly the entire portfolio of wines from 90+ Cellars, which is a good thing as they have some excellent, value wines.  Though you can find these wines on the wine racks, they also have the above unit which showcases all of their wines. I have written about these wines before, and found some true treasures in their portfolio.

On the negative side, the store is lacking in a number of niche wines, and has limited options for some other wine regions.  For example, though they have maybe 30+ Spanish wines, only one costs over $20.  So they lack any higher-end Spanish wines, such as the best from from Rioja and Priorat.  There are only three, inexpensive Portuguese wines as well as maybe five, inexpensive South African wines.  They do not carry any Greek wines, Israeli wines or Sherry.  There are only three Sakes, and none that are particularly interesting or excellent.

When I asked about some of the missing niche wines, I was told that there were no current plans to bring in them to the store.  Instead, they would wait to see what their customers requested, to determine whether people would ask for Greek wines or sherry or not.  I countered that customers may not always know which wines they might like. For example, most people might not request sake, but it is certainly something they would enjoy if they were exposed to it, if they got to taste some delicious, premium sake. Thus, they should be exposed to unfamiliar wines, to get them to broaden their palates.

I raised this issue in a discussion on Facebook, without naming the store, and an employee of the Wine Bunker responded.  But, she essentially changed what I had been informed hours before, in her presence, at the store.  Now, the store allegedly will start carrying some of those niche wines, such as Greek wines, without waiting for customer requests. We shall see what develops. 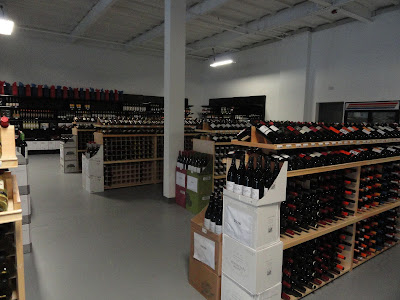 There is a Grand Holiday Tasting Event scheduled for Saturday, December 4, from 2pm-6pm, which should have over 60 wines available for tasting.  They will be holding regular tasting events but have not yet worked out a schedule.

On their website, which apparently is still being changed, you can order numerous wines, though they all appear to have a tiny clock on their listing. Previously, that clock indicated there was a need for a "3 day lead-time required to confirm availability." That has since been changed to a 5 day lead-time. Corporate Wines used to do something similar, and ran into some complaints about the process.  I was informed that the system was different now, more in sync with the distributors, so maybe there will be less times when the wines you order are not available or the price has changed.

Overall, I see this wine store as a place of great potential, but whether it meets that potential or not remains to be seen.  More signage, including shelf talkers, needs to be added.  Pricing needs to be more consistent, so that the wines all have similar discounts.  Currently, some prices are very good while other wines you can find cheaper elsewhere.  The selection needs to be improved and expanded, carrying more variety and niche wines, especially if they want to attract the more experienced wine lovers.
Posted by Richard Auffrey at 5:00 AM

Thanks for this review Richard! Very handy. I like that I can check their prices online, and I like to see competition in wine retail in the Boston area. It's always good to have options to choose from.

The Bunker is evolving and will continue to do so over time. Most critics will have nothing nice to say - so I don't really listen to them. They want us to bring in sherry or other items - but from experience this stuff sits on the racks.

Critics must understand - that opening a new retail store in this economic environment is very challanging. So we must be prudent on what we purchase.

Yesterday we had our first wine tasting and over 350 customers showed up. So I think we are doing something right.

Peter:
Why will "most critics have nothing nice to say?" I have yet to see a review of the Wine Bunker that is completely negative.

Other wine stores are able to sell sherry and similar niche wines, so it certainly can be done. They are more of a handsell, and require more effort to sell, but it can be done. It all depends on the philosophy of your store. It is certainly far easier just to sell what is most popular, and not expose your customers to new wines.

I for one understand the challenges of opening a new wine store in this economy. I know a number of them which have opened in the past year, from Beacon Hill Wine & Gourmet in Reading to the Urban Grape in Chestnut Hill. I have spoke with the owners, discussed their inventory, and their philosophy. They seem to have found a balance in their inventory, between popular wines and niche ones.

As I stated in my review, your store has potential. We shall though how the future develops.