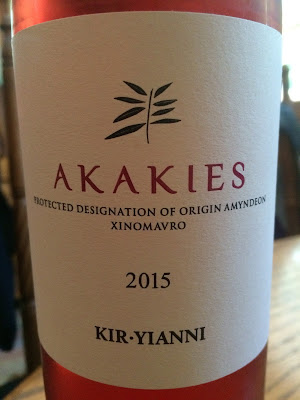 ξερωσφύρι (kserosfiri or xerosfyri). A Greek term that literally means "dry hammer" and refers to "drinking alcohol without eating." It is commonly used as a negative reference, as Greeks, like many Europeans, believe you should drink wine accompanied by food. Americans, on the other hand, often drink wine on its own. Maybe more Americans should be emulating the Greeks.

At the very least, more Americans should be consuming Greek wine. Why should they do so? Check out my Ten Reasons To Drink Greek Wine, which hopefully will motivate you to sample Greek wines, to explore its diversity and wonders. And let me provide you a specific example as well.

This summer, many Americans will drink Rosé, commonly on its own, while they sit outside and enjoy the beautiful weather. However, the Greeks understand that Rosé is an excellent wine for food, pairing well with many different dishes. And in addition, Rosé can and should be enjoyed year round, paired with everything from your Thanksgiving turkey to a simple pizza.

In Greece, there is a single Appellation of Origin for Rosé wine, the Amyndeon, located in northern Greece in Macedonia. All of the wines from Amyndeon must contain at least 85% Xinomavro. One of the most well known wineries in this region is Kir-Yianni, which means "Sir John" in Greek. The winery was founded in 1997 by Yiannis Boutaris, who had left the Boutari Wine Group.  Though their first vintage was in 1990, it was not until the 1995 vintage that the wine was bottled under the Kir-Yianni name. More than half of their labels are single vineyard growths on the eastern and western slopes of Mt. Vermio in Macedonia. They grow indigenous Greek grapes as well as some international ones such as Syrah and Sauvignon Blanc.

I recently received a media sample of the 2015 Kir Yianni Akakies Rosé ($15), which is made from 100% Xinomavro. The vineyard for these grapes is located at an altitude of about 2300 feet and is surrounded by numerous Acacia trees. The term "Akakies" means "Acacia" and refers to the presence of these trees.

Xinomavro (which means "acid black") is an indigenous grape in northern Greece and often is compared to Nebbiolo. Xinomavro is difficult to grow and usually provides mild color, strong tannins and high acidity. Because of those characteristics, it ages very well. While young, the wines tend to be dominated by red fruits and as they age, you'll find more savory notes, such as tomato and olive. It is a grape with which you should be familiar, and which should impress.

The 2015 Kir Yianni Akakies Rosé under went about 3 months sur lie and batonnage, and has a 12% ABV. With a bright pink color, I found this Rosé to be crisp, dry, and full bodied with bright strawberry flavors as well as some savory, herbal notes, especially on the finish. It was clean and refreshing, an excellent summer wine, yet which would not be out of place during the winter either. It would pair this with seafood dishes, from oysters to sushi, as well as roast chicken and even pizza. I even paired this Rosé with ribs and it would very well.