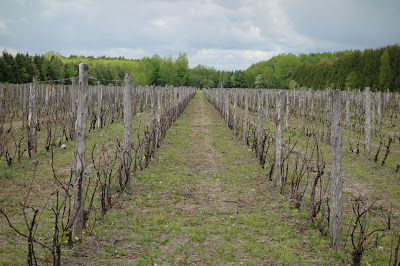 Wine doesn't have to be made from grapes to be delicious or interesting. During TasteCamp, our three-day exploration of the wines, beer and food of Quebec, this was made evident by numerous compelling wines made from apples, strawberries and honey. Some of these fruit wines were even better than some of grape wines we tasted. Quebec would be well served by continuing to showcase these delicious and intriguing fruit wines. 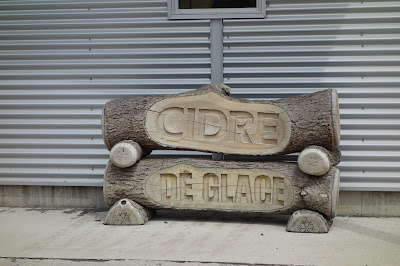 You may be familiar with Ice Wine, from Germany, Canada or elsewhere, but Quebec is the birthplace of Cidre de Glace, apple ice cider which is sometimes known as apple ice wine. Ice cider can be produced into two different ways, cryoextraction and cryoconcentration. In short, cryoextraction means that the apples are allowed to freeze on the tree before they are harvested, pressed and fermented. With cryoconcentration, the apples are harvested and pressed, and then the juice is allowed to freeze. What difference does this make for the resulting ice cider? In general, cryoextraction will produce more fresh fruit flavors, increased acidity and less oxidation. It is more expensive to produce though so many ice cider producers primarily use cryoconcentration.

Ice cider is growing in popularity in Quebec, and elsewhere, and Farm Credit Canada states that it accounts for 70% of sales in the Société Des Alcools du Québec (SAQ) local product section. About 1 million bottles are produced in Quebec each year, worth an estimated $20 million in retail. About 1/3 of the production is exported to Europe and Asia. Some ice cider is imported into the U.S. and you might know Neige, an ice cider produced by La Face Cachée de la Pomme, which I have I previously reviewed. 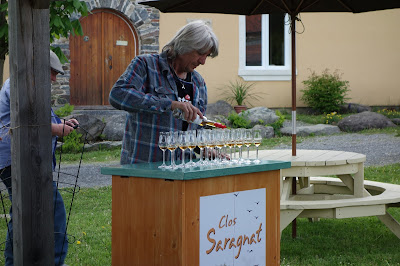 During our explorations, we visited with Christian Barthomeuf (pictured above), the owner of Clos Saragnat, as well as the creator of ice cider. He was also one of the first men in Quebec to plant grape vines, back in 1979. Around 1989, he decided to produce something different, and created ice cider, though in the 1980s, no one wanted to hear about cider. The wine regulating bodies refused to recognize the designation of "ice cider" until ten years later. It was difficult during those ten years to market and sell ice cider, which had to be known by other common terms, which were not actually accurate terms.

Christian has consulted with other wineries and cideries, including what would eventually become La Face Cachée de la Pomme. In 2002, Christian and Louise Dupuis founded Clos Saragnat, which occupies about 35 hectares. Their apples are organically grown and they grow some other fruits as well. They produce their ice cider through cryoextraction, though it would cost them one-third less to use just frozen juice. An assemblage of apple types are used, and Christian wants to work with the fruit and nothing else, including wood. The cidery produces less than 10,000 bottles a year, largely dependent on the results of each vintage. It is a small, artisan operation and Christian's passion for ice cider was more than evident.

Currently, Christian is advocating for new regulations on ice cider, to make producers have to place on the label the method of production. He believes people should know whether the ice cider they are drinking derives from frozen apples or frozen juice. As there are clear differences in the resulting product from each different method, as well as differences in price, I agree with Christian that it would benefit consumers for this information to be required to be on the label. 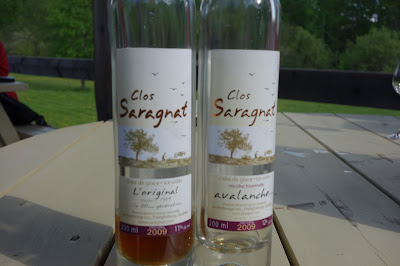 We tasted two of their ice ciders, the 2009 Avalanche and the 2009 L'original, both sold in 200ml bottles. Both were excellent, complex, liquid ambrosia that seduced the palate. The Avalanche was less sweet, though still with honey notes, and possessed some tartness, good acidity and delicate floral notes. The L'original was sweeter, with a thicker and richer mouth feel, but still good acidity. It also had more dried fruit flavors and far fewer floral notes. Which is better? It all depends on your mood at the moment. 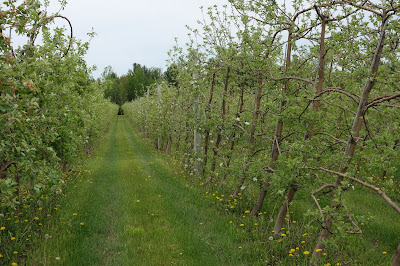 Christian's influence can be felt at La Face Cachée de la Pomme, which means the "hidden side of the apple." They have been producing ice cider since 1994 but only commercially since 1998. They prefer to refer to their produce as "apple ice wine" so they can avoid any confusion with other ciders. Their orchards extend over 50 hectares and they grow about 30 different types of apples, though the majority as McIntosh and Spartan. The McIntosh is the essence of their Neige Premiere and Bubbly.

They currently have two types of apple tree plantings, the classic and contemporary. The classic method generates less apples per acre and it takes much longer, 10-15 years, for the tree to mature properly. The contemporary method, which was inspired by the Netherlands, takes only about 5 years to mature properly, and an acre can produce significantly more apples. As all of their harvesting is done by hand, this method is also easier to harvest. The cidery is moving toward all contemporary plantings.

Unlike Christian, La Face Cachée primarily produces apple ice wine through cryoconcentration, about 90% of their production. They use cryoextraction for their Neige Winter Harvest. They export their apple ice wines to 20-25 countries, and California is their largest U.S. market, though they are also available in Massachusetts. Unfortunately, only two of their products, the Neige Premiere and Bubbly, are currently available in the U.S. It is interesting that because of U.S. law, the cidery is not permitted to place the vintage on their labels. 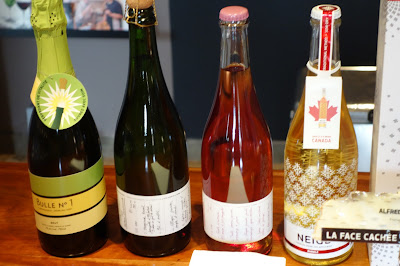 I was enamored with the 2011 Bulle Rose Sparkling Cider ($18), a blend of the Geneva and Honeygold apples. It acquires its pink color from the red/pink flesh of the Geneva apple, rather than from the skin. It only has a 6% alcohol content and is made in limited quantities once a year. The delicious sparkling cider was mostly dry, fresh, crisp and bursting with apple and and red berry flavors. An excellent summer drink, and very food friendly as well. 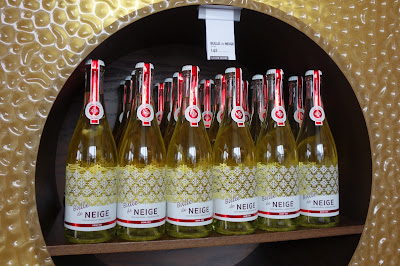 The Neige Bubble ($15) is made from 100% McIntosh apples and I previously tasted and enjoyed at the Boston Wine Expo. Another fun sparkling cider, perfect for summer entertaining, or just relaxing. I am also a fan of the Neige Premiere, their basic apple ice wine. 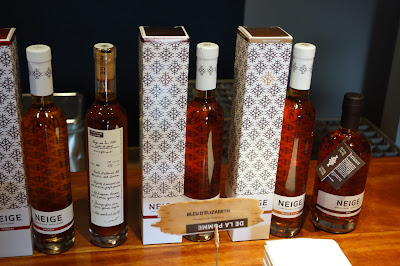 The 2009 Neige Sur Lie ($26) is intriguing, having been left on the lees for about a year, and bottled unfiltered and without any sulfur. It has a darker amber color, with apple notes but deeper flavors of caramel, nuts and almost butterscotch. It is sweet, though with balanced acidity, and possesses a lengthy and complex finish. The Neige Winter Harvest is very thick, rich and sweet with a melange of complex tastes, including caramel, apricot, lychee and dried fruits. An amazing, well balanced elixir that delights the palate and mind. 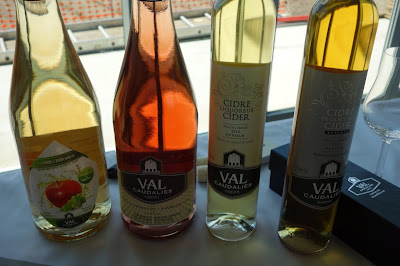 Val Caudalies Vignoble produce ciders and wines, and their orchard are planted with about a dozen different varieties, with five usually primarily in their ciders. Their 2010 Cider Liquoreaux, made from Cortland, MacIntosh, Empire, Liberty and Spartan apples, is smooth, tart and tasty while the 2011 Apple Ice Cider Reserve, made from the same apples, is sweeter with a silky mouth feel and plenty of complexity. Both were fine examples of what Quebec is doing well. 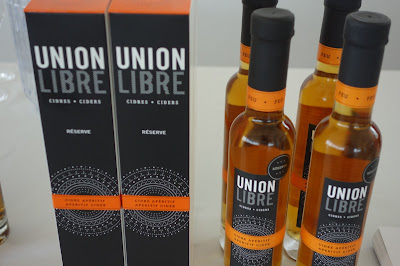 Though Union Libre Cidre & Vin produces ice ciders and wines, they are also known for another unique product, Le Cidre de Feu, fire cider. Their Ice Cider ($24), made from an assemblage of Cortland, Empire, Spartan, & McIntosh apples, is made from cryoconcentration. It has a mild sweetness and a delicious crisp apple taste with elements of honey. A fine product.

Their Fire Cider ($26) is produced by fermenting a must, which has been heated and reduced by evaporation. This process takes several months of fermentation and then it is aged in oak barrels. It has an alcohol content of 16% and is sweeter, with more caramel, maple, and nutty elements complementing the apple foundation. Their 2004 Reserve Fire Cider ($28) is aged in Jack Daniel's whiskey barrels. It is similar to the basic Fire Cider, but with deeper flavors and the added element of a whiskey aroma and taste. 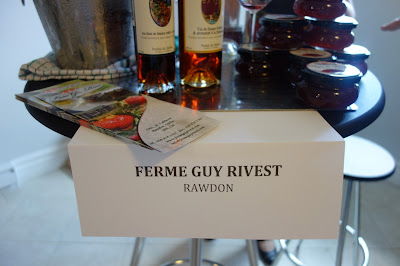 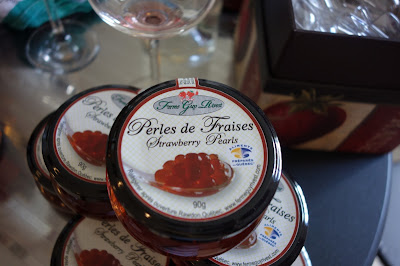 As an interesting aside, they also produce Strawberry Pearls, which uses molecular gastronomy techniques to create little red pearls, resembling fish roe, but which burst in your mouth with a strong strawberry flavor. 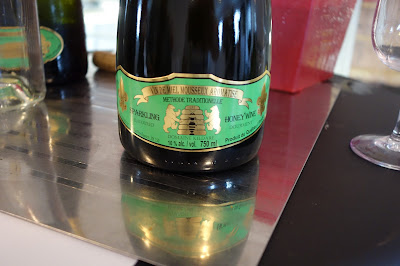 Finally, at one of the large tastings, one of the most interesting wines was the Les Ruchers du Troubador Sparkling Honey Wine ($25), a vin de miel mousseux. It is organic, unfiltered and aged for three years prior to release. It is semi-sweet, with honey and floral notes, and an appealing earthiness elevating its complexity. 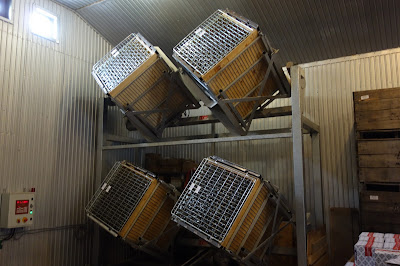 People sometimes get overly pretentious, feeling that only wine made from vitis vinifera grapes is worthy of attention. They show disdain for hybrid grapes, and out right hate for wines made from other fruits. They are wrong in their attitude and approach. Good wine can come from many different avenues and my experiences in Quebec have shown me high quality and delicious wines made from apples, strawberries and honey. I know others who visited Quebec who felt the same. That should be your main takeaway from this post, that you should be willing to explore wines beyond vitis vinifera. You never know what treasures you might discover.
Posted by Richard Auffrey at 3:00 AM

I'm glad you liked all of the "offbeat" offerings. I have enjoyed all of those styles in Quebec and have been impressed as well. Their work with apples is very notable.