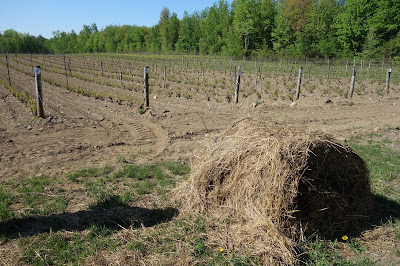 Vinifera are also important at Vignoble Les Pervenches. The vineyard was established in 1991, but the current owners, Michael Marler and Véronique Hupin, purchased it in 2000. The vineyard consists of three hectares, certified organic, and they grow hybrids and vinifera, though since 2003, they have only planted vinifera grapes. Their most planted grape is Chardonnay, and they possess some which is 22 years old. You'll also find grapes like Zweigelt, Pinot Noir, Marechal Foch, Seyval Blanc, and Frontenac. They plan on planting some Pinot Gris this year, planting a few rows to see how it does. 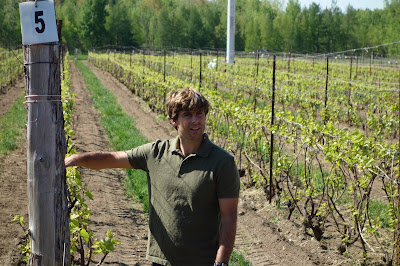 Michael, pictured above, informed us that for the last five years, they have been practicing Biodynamic viticulture though they are currently not Demeter certified. Their issue right now that that they have made some changes to their viticulture, due to difficulties with the laborious practice of stirring the waters for their Biodynamic preparations. To Michael, the only way to assess the efficacy of Biodynamics is to do it and check the results. He is still unsure if his results are due to Biodynamics or simply from being a conscientious farmer. 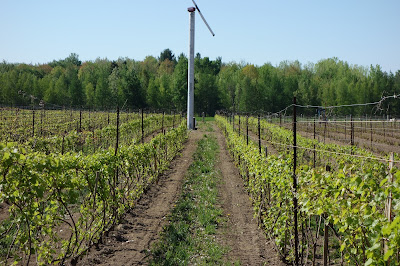 The winery produces about 15,000 bottles annually, with small increases each year. The cold, like for all of Quebec, is an issue and they cover their vinifera grapes with cloths to protect them, though that can also lead to mice and rabbits sometimes taking residence under the cloths. 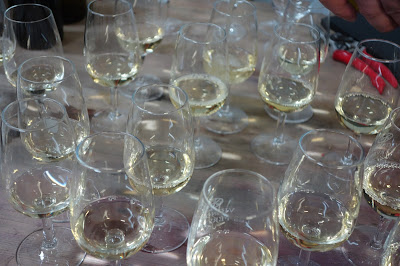 We got to taste one of their recently released wines as well as a number of barrel samples. Their whites were definitely my favorites, especially their Seyval Blanc and Chardonnay wines. The 2012 Seyval Blanc & Chardonnay blend ($17) was bottled only 2 weeks ago. The blend consists of 85% Seyval and 15% Chardonnay, was barrel fermented and they used natural yeast. It had a clean, crisp, fruity taste, some delicious pear and apple. Based on my tastings, I think their concentration on white wines is a very good idea and I would recommend you check out their wines. 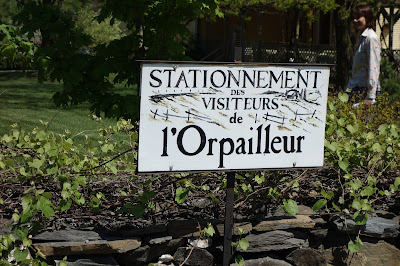 One of the most beautiful properties we visited was at L’Orpailleur, where we met founding member Charles-Henri de Coussergues. As I stated yesterday, they are now the largest winery in Quebec, producing around 160,000 bottles per year. 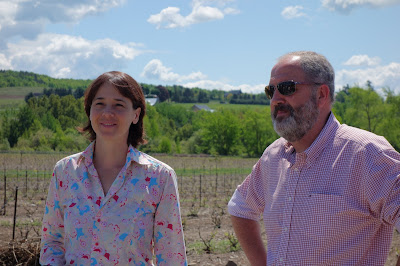 Their biggest challenge is to pass safely through the Quebec winters and pruning is a very important aspect in that regard. They conduct 3 main types of pruning, and each grape type has its preferred method of pruning. For example, Chardonnay has a more complicated pruning. They also practice hilling, putting sand or dirt over some of the vines as protection. Their oldest grapes are hybrids, sich as Vidal Blanc, Seyval Blanc, Marechal Foch while their newer grapes include Chardonnay, Riesling, and Gewurztraminer. 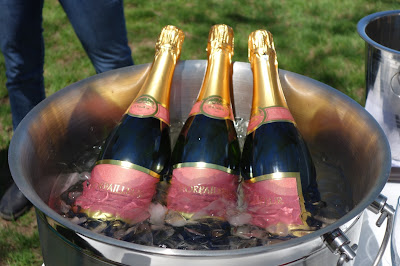 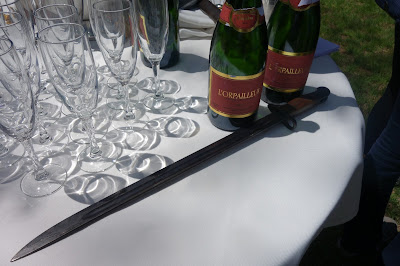 We started our visit with some bubbly, the NV Orpailleur Brut ($26), and several writers even got to saber open some bottles, using the blade pictured above. They first started producing this sparkling wine back in 1992, beginning with 2000 bottles, and they use the traditional Champagne method. The Brut is made from 100% Seyval Blanc, is aged for about 2 years and has an alcohol content of 11.5%. I was impressed with this Brut, which was crisp, clean and dry, possessed of some subtle and pleasant apple and melon notes. A hearty recommendation for this bubbly. 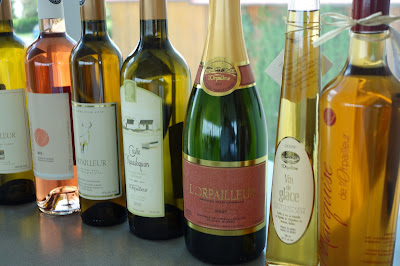 The winery also produced one of my favorite wines of the trip, the 2010 Cuvee Natashquan ($25), which is also made from 100% Seyval Blanc. It spends a year in French oak, 30% which are new, and it possessed an intriguing complexity, as well as a rich, savory mouth feel and nice citrus tastes. Each sip impressed and I seemed to find something else within it to enjoy. This may be made from a hybrid, but you wouldn't know it from the taste. You would just taste a delicious and compelling wine. Highly recommended. 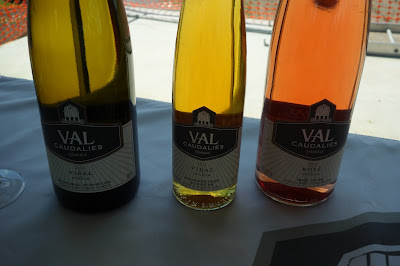 At L’Orpailleur, after lunch, we had a tasting of wines from a number of other nearby wineries, and I wanted to highlight a few of my favorites.

The 2012 Val Caudalies Rosé ($17.50), a blend of Chambourcin, De Chaunac, Marshal Foch and Lucy Kuhlman, was crisp and dry, with subtle red fruit flavors that brought to mind a Provence Rosé. An excellent summer wine, as well as something that would be delicious year round. Their 2012 Vidal ($16.75) was very aromatic, with citrus, peach and floral notes. Another nice summer wine, something to sip on the front porch, in the backyard or at the beach. 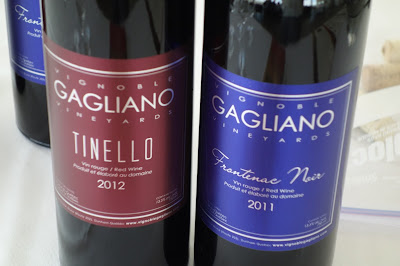 Vignoble Gagliano made a delicious 2012 Frontenac Gris ($18) which had a complex melange of taste, with notes of honey, apricot, and lychee. It was crisp and smooth, with a very pleasing finish. Their 2011 Frontenac Noir ($25) was one of my favorite red wines, with rich red and black fruit flavors, hints of spice and a smooth, lingering finish. 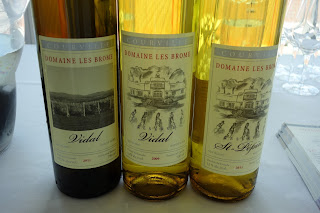 The 2009 Domaine Les Brome Reserve Vidal ($24.50) was intriguing, with delicious citrus, peach, white flower and a backbone of minerality. 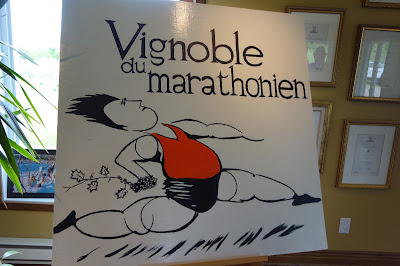 White hybrids and ice wine also impressed me at Vignoble Le Marathonien, which is owned by Jean Joly which ran some marathons when he was younger, hence the winery name. 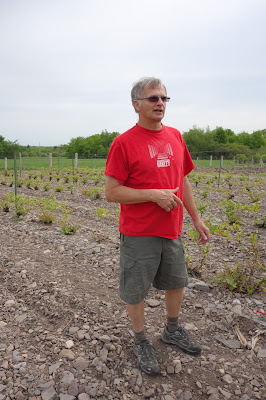 Jean Joly, pictured above, led us on a tour of his 2 hectares of vineyards, which have a very stony soil that provide excellent drainage, and the rocks also maintain heat. The vineyard started in 1989, growing only hybrids, but they now grow a few vinifera, like Cabernet Franc and Merlot. 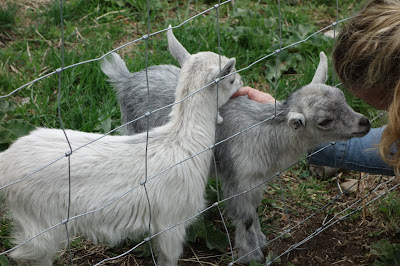 There are several goats on the property, and the baby goats were especially cute. They serve no larger purpose on the vineyard but they do make for a fascinating attraction for visitors. 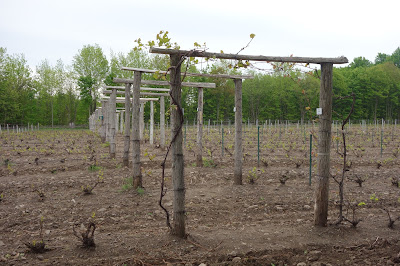 The winery produces about 12K-15K bottles annually, including some compelling ice wines. 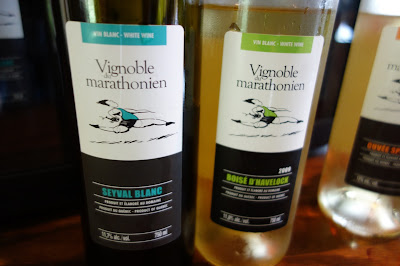 The NV Seyval Blanc ($12) is 100% Seyval Blanc, a blend of 80% from the 2011 vintage and 20% from the 2012 vintage. It was fresh, clean and crisp with bright fruit. Simple but not one-dimensional. An excellent value wine, pleasant enough to drink on its own or a nice accompaniment with food. The 2009 Boise d'Havelock ($13) is also 100% Seyval Blanc but is undergoes 6-8 months of oak aging. It had a richer, more complex taste and I found it very appealing. Of these two wines, each has their place, and it depends on your mood at the moment which you would prefer.

The 2011 Late Harvest ($28), made from Vidal, was delicious, with a pleasant sweetness, balanced by acidity, and flavors of honey, apricot and citrus. The most impressive wine though was their Ice Wine ($50), also made from Vidal. In 1994, they were the the first ice wine producer in Quebec. This ice wine had a bright golden color, and an alluring aroma of honey, flowers and dried fruit. Its richness caressed the tongue, yet possessed sufficient acidity to prevent it from being too cloying. A lengthy, satisfying finish helped to elevate this wine to the top of the charts. A killer wine and highly recommended.
Posted by Richard Auffrey at 3:00 AM