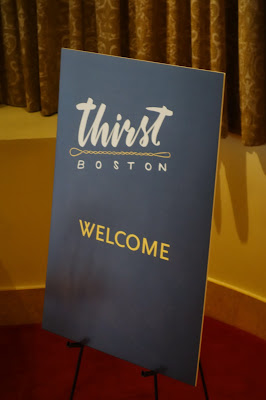 Last week, I attended, as a media guest, the multi-day event, Thirst Boston, held at the Hotel Commonwealth in Kenmore Square. The event was created and organized by a group of four locals, including Maureen Hautaniemi, Brandy Rand, Andrew Deitz, and TJ Connelly, though plenty of others contributed to the event's success, from presenters to volunteers. On their website, Thirst Boston's intent is to be "...a gathering of bartenders, industry icons and beverage connoisseurs from Boston and beyond. Our goal is to educate attendees on the science, craft, and taste of all things related to the art of drink. We want to celebrate our local talent (your favorite bartenders and baristas) and have a pretty kick-ass time hanging out together." I believe they successfully accomplished their objective. 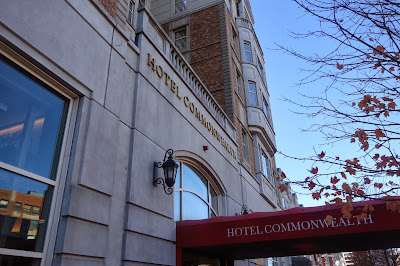 The event started on Saturday night and ended on Tuesday morning, though the heart of the event took place on Sunday and Monday. There were an assortment of parties and lunch events, priced from $30-$75, and over 20 seminars, priced $20 each, with a number of complimentary events, such as after- parties and tasting rooms, which accompanied your purchase of any event or seminar ticket. You could also purchase a one or two day pass, for $135 or $295, which allowed you entry to three seminars each day, as well as the three daily special events. The two day pass also included a ticket to the Saturday evening party, The Thing. Even if your budget was tight, there was still plenty you could experience for just $20, the cost of a seminar.

There was a nice diversity of events, from the Saturday night opening party, The Thing, at the Harvard Club, to lunch events such as High Tea & Tipples with Drambuie and The Appleton Estate Jamaican Bartender's Brunch. There were other parties too, such as Blender Blender (a bartender competition of frozen drinks) to Stars, Stripes & Swing (a celebration of Armistice Day). You also found after parties hosted by brands from Fernet Branca to Bulleit Whiskey. There were over 20 seminars, a pop-up of The Boston Shaker, book signings, a few tasting areas, and more. There was something for everyone, and plenty of opportunities to taste some fine drinks. 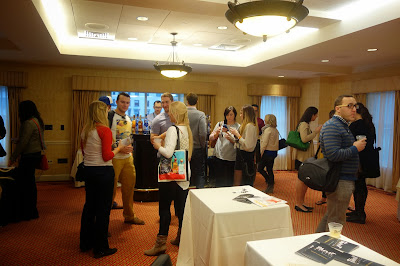 As I attended last year's Boston Cocktail Summit, drawing comparisons between the two events seems appropriate. First, the Summit was primarily concentrated on spirits and cocktails, while Thirst, which was heavy on spirits and cocktails, expanded its offerings to include beer, wine, cider, and non-alcoholic drinks. Second, the audience at the Summit seemed to consist mostly of people in the trade, while the audience at Thirst included many more individuals who were just enthusiasts, and didn't work in the trade. In addition, Thirst seemed to have a higher overall attendance than the Summit. Third, the Summit ran twice as many seminars as Thirst, however the Thirst seminars garnered nearly full attendance while a number of Summit seminars had a much more skeletal attendance.

Probably the most significant difference between the Summit and Thirst was logistical. I previously discussed the logistical problems with the Summit, primarily because they split their events between two hotels which were situated a fair distance from each other. That made it more difficult for attendees to attend events because of the often lengthy travel time that had to be considered. Thirst concentrated their events at a single location, the Hotel Commonwealth, making it far easier to get around and attend events. The evening parties were generally at different locations but that wasn't a significant concern. Thirst seemed to run very well, and was better organized than the Summit. Hopefully Thirst will return again next year and be even better. 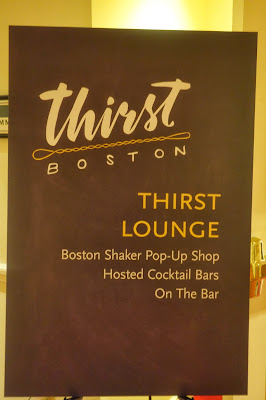 The Thirst Lounge was a complimentary area for event/seminar ticket holders and included the Boston Shaker Pop-Up Shop, four different Hosted Cocktail Bars (2 on each day), and a couple tables promoting drink media and the On The Bar app. They even had some breakfast pastries each morning for the early risers, those who weren't too hungover from the evening parties. 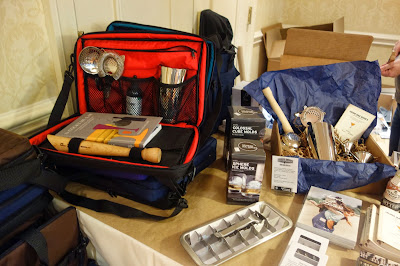 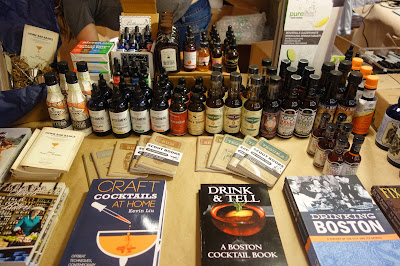 The Boston Shaker Pop-Up presented a wide variety of cocktail related items for sales, from bitters to mixing kits, books to t-shirts. There were even author signings. For cocktail supplies, the Boston Shaker is certainly the local go-to spot and after getting excited at the various seminars, it was cool that attendees could pick up some of these items at Thirst. 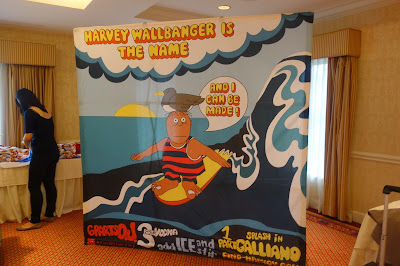 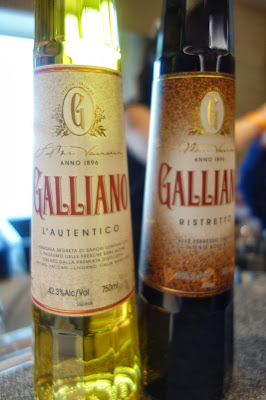 On Sunday, I stopped by the Hosted Bar for the "Wake Up Breakfast Bar" with Galliano and had a cocktail, the Harvey Wallbanger, which I haven't had in many years. A Harvey Wallbanger is basically a Screwdriver with the addition of Galliano, and November 8 was even National Harvey Wallbanger Day. The origins of the cocktail are in dispute and it seemed to fade out of popularity, however it might be making a comeback. Galliano is a sweet & herbal Italian liqueur and in the Wallbanger, it adds a bit of sweetness as well as some herbal elements.

The basic recipe for the cocktail contains 1 1/2 oz. Vodka, 4 oz. Orange Juice and 1/2 oz. Galliano L’Autentico. Mix the vodka & orange juice in a highball glass filled with ice cubes and then pour atop a float of Galliano. Garnish with an orange wedge. I actually enjoyed this cocktail, kind of a retro thing, and with the orange juice, it was a nice morning drink. 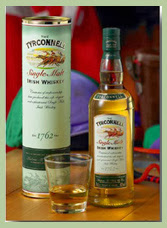 On Monday, I stopped by the "Top o’ the Morning Bar" with Kilbeggan & Tyrconnell Irish Whisky. I've enjoyed Kilbeggan before but Tyrconnell ($72), an artisan distillery that was bought by Kilbeggan, was new to me. It is a Single Malt Irish Whiskey that was aged for ten years, including 8 months in a Port cask. The whisky is smooth and complex, with notes of vanilla, honey, citrus, red berries, spice and caramel. Everything is well balanced and the finish is lengthy and pleasing. A fine sipping whisky, and it would make a great gift for the holidays. Highly recommended. 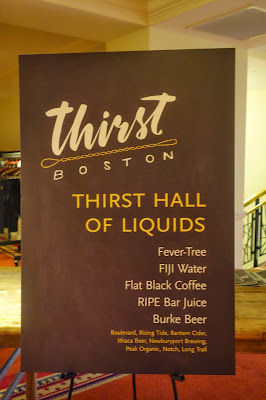 Another complimentary area was the Hall of Liquids, which offered tasting samples of beer, cider, and some nonalcoholic beverages. For example, local beer brands and producers included Boulevard, Rising Tide, Ithaca Beer, Newburyport Brewing, Peak Organic, Notch, and Long Trail. Flat Black Coffee, which specializes in single origin coffees and is committed to ethics & sustainability, was very popular each morning. 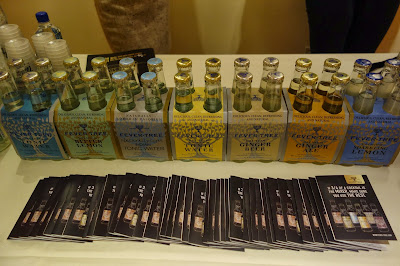 Fever Tree makes a series of cocktail mixers, including Indian Tonic Water, Tonic Water, Mediterranean Tonic, Bitter Lemon, Club Soda, Ginger Beer, Naturally Light Ginger Beer, Ginger Ale, and Sparkling Lemon. The company launched in the UK in 2005 with their Premium Indian Tonic, which contained quinine. ‘Fever Tree’ is a colloquial name for the Cinchona Tree in which quinine is found. They use all natural ingredients and I have enjoyed their products before. I tasted their Sparkling Lemon, which I hadn't had before, and it was only mildly sweet with a strong lemon flavor and a refreshing effervescence.

They have an ad that states: "If 3/4 of a cocktail is the mixer, make sure you use the best." That is certainly an important issue in cocktail making, that the quality of your mixers matters a great deal. Using a high end spirit, but cheap ass mixers, defeats the purpose and lessens the cocktail. Top mixologists understand and it is something that home bartenders need to pay heed. Every ingredients matters. 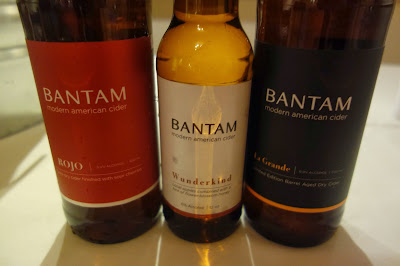 Michele da Silva, one of the owners of Bantam Cider, showcased three of their ciders. I've raved about their ciders before, and got to taste one of their new products, the Bantam Rojo ($7.99/22 oz). It is made with sour cherries and black peppercorns, and it is a challenge to produce year round as fresh cherries aren't available all year. It is mostly dry, with a sour aspect up front, and a prominent cherry flavor throughout. There is a mild peppery note in the background. It was made for Thanksgiving and I think it would be a good choice for such. I think this is another winner from Bantam.

In the future, Bantam will be making more barrel aged ciders, and maybe using straight bourbon barrels.They are also working on a Smoked Saison, which will use smoked apples with a Saison yeast, and it could be available in January or February. 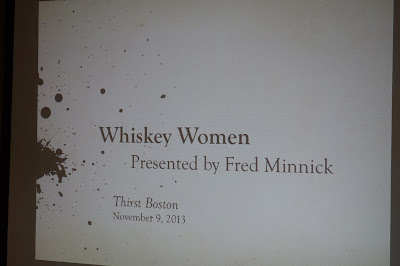 Thirst Boston held 22 different seminars, 11 each on Sunday and Monday, and they ran for 90 minutes. The seminars were broken down into 4 time periods, with 2-3 seminars in each period. The seminars covered a diversity of subjects and they were well attended, a number of them selling out. Each seminar seemed to have 25-30 or so attendees, and when the attendees were polled, it showed the variety of the audience, from bartenders to enthusiasts. The presenters did well, and there were tasting components to all of the seminars I attended. Next year, as the number of attendees will likely grow, the event might want to add one or two more seminars each period.

I'll be posting more about these seminars in the near future. 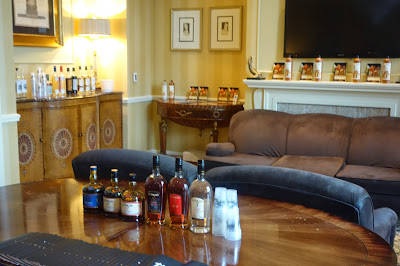 Thirst Boston was an improvement over last year's Cocktail Summit, and hopefully it will return next year. I met lots of great people at the event, tasted some delicious beverages, learned more about spirits & cocktails, and had a fun-filled couple of days.

If you attended Thirst Boston, what were your thoughts?
Posted by Richard Auffrey at 3:00 AM

Great post - I was a media sponsor so was very sorry to miss it - was fighting a cold. Definitely hope to do this next year as it sounds excellent and comprehensive, plus I was sorry to miss seeing old friends there :)