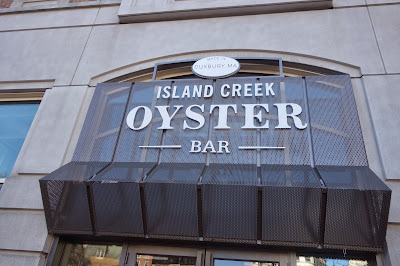 "Terroir," a sense of place, is a hot word in the wine world, however it applies elsewhere as well, such as food. Honey, cheese, mushrooms and more can possess a unique sense of place. We can even extend the concept to merroir, the effect of the ocean on seafood like oysters. Besides food and wine, you can even find some spirits which possess the potential for terroir, being reflective of a specific place. At Thirst Boston, one of their seminars dealt with some of these issues. 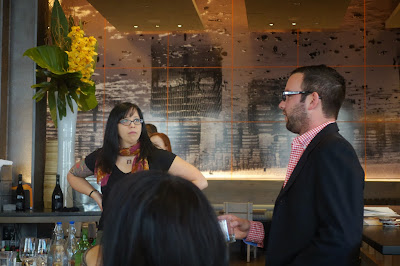 The seminar, Location, Location, Location: Terroir & Merroir, was held at the Island Creek Oyster Bar and led by Tom Schlesinger-Guidelli, the General Manager at Island Creek, and Misty Kalkofen, a noted mixologist and the Brand Ambassador for Del Maguey Mezcal. They led us through a discussion of terroir and merroir, as well as a tasting of wine, rhum agricole, mezcal, coffee, chocolate and oysters. Tom and Misty were informative and fun, the seminar was well attended,and the setting of the restaurant was a nice touch. 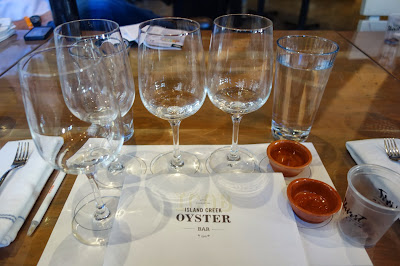 Terroir was said to include vintage, land, air, water, and temperature though there was a disagreement between the two presenters whether the human element should be considered part of terroir or not. Misty felt that it should though Tom had some doubts. For myself, I believe that it includes the human aspect, though that is probably too complicated and lengthy of a discussion for now. Tom and Misty also mentioned that "terroir is an opportunity," indicating that choices in the production of food or drink can obscure and eliminate terroir. Not all wines indicate terroir and that is largely due to the choices made during the wine making process, such as whether heavy intervention is conducted. So, though we may not agree that the human element is part of terroir, it is clear that human intervention can obscure terroir.

A limited number of spirits were said to have an opportunity for terroir, including Brandy, Cognac, Armagnac, Rhum Agricole, Scotch, Mezcal and Tequila. Personally, I would add that other spirits may have that potential as well, including even something like Vodka. For example, I believe that Karlson's Vodka, an unfiltered, Swedish vodka that is made from several different varieties of virgin potatoes, and grown in a specific area of Sweden, can show terroir. However, most other vodkas probably do not show terroir. 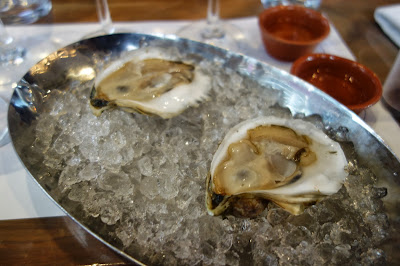 As for food, we enjoyed a couple Island Creek Oysters, from the waters off Duxbury, which possess a briny flavor that is indicative of the ocean where they are grown. The water's temperature, salinity, mineral components, and more all contribute to the taste of an oyster so that oysters grown in different parts of the ocean will possess unique tastes.

We also snacked on some Taza Chocolate Cacao Puro Chocolate Mexicano, which is made from a single origin Dominican cacao and organic raw sugarcane. An entire seminar could be devoted to the differences of cacao from various regions.

There was even one nonalcoholic drink tossed into the mix, coffee from Jim's Organic Coffee. Tom mentioned that the lighter the roast, the more likely the coffee will possess terroir. The coffee that was provided was a Guatemalan Atitlan, an organic single origin coffee. Coffee is another beverage which may or not show terroir, dependent on numerous factors of how it is produced. 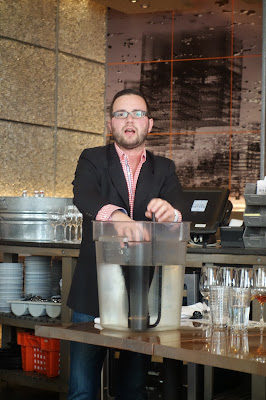 I've visited the Collio region of Italy, located in the northeast and bordering on Slovenia. At one point on my trip, I ascended a mountain on the border and as I traveled up the windy path, I passed in and out of Italy and Slovenia. I could even stand and have a foot in both countries. The land on both sides is similar and the estate of the Movia Winery actually occupies land in both Slovenia and Italy. As the winery is physically in Slovenia, the wines receive the appellation of Brda, and not Collio. The estate was purchased in 1820 by the Kirstancic family, and it is currently run by Ales Kirstancic. Ales produces "natural" wines, wines intended to reflect terroir, and you will find them very different from many other wines you are used to. I've had Movia wines before and I am a fan of their unique style. At the terroir seminar, we tasted two Movia wines, each intriguing and tasty.

The 2005 Movia "Puro" Rosé Sparkling Wine is made from 100% Pinot Noir, spending four years in large Slovenian oak barrels and two years in the bottle. Interestingly, the wine still contains the lees and you must disgorge the bottle on your own. Nearly every other sparkling wine in the world is already disgorged before the bottle is offered for sale. For Ales though, he feels that the wine is alive, and should continue to develop in the bottle until that last moment when you open it. It doesn't contain any preservatives, but the lees and natural yeast are supposed to give this wine longevity. In the picture above, you can see Tom disgorging the bottle. I have disgorged a sparkling wine before, and it is not that easy if you have never done it before but I appreciate and respect the intent behind this wine. The wine is delicious, with crisp acidity, a light effervescence, clean red fruit flavors and hints of a briny finish.

The 2008 Movia Sivi Pinot is made from 100% Pinot Gris, which has aged for 18 months in large French oak. It was an intriguing white wine, with crisp, clean flavors and touches of peach and citrus, minerality and a light smokiness. A richer wine with plenty of complexity and a lengthy finish. Would be a great wine for Thanksgiving. 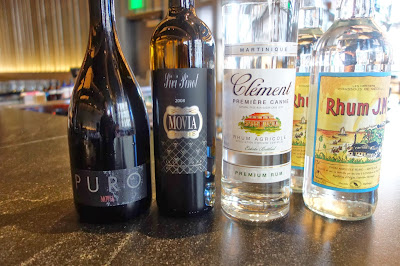 We next moved onto Rhum Agricole, a type of rum from the French West Indies that is distilled from sugar cane juice rather than molasses. That makes it more similar to Cachaca rather than Rum. The island of Martinique has an AOC (Appellation d'Origine Contrôlée), the only one of its kind, and that tends to support that terroir is potentially involved.

In 1887, Homere Clement, a physician and mayor, purchased a 43 hectare sugar plantation, Domaine De L'Acajou, and transformed it into a Rhum producer, Clement Rhum. We tasted their Première Canne, which was fairly smooth with an interesting herbal taste and a bit of sweetness. It seemed a bit simple though.

On the other hand, Rhum J.M., which was founded in 1845 on Martinique, produced a more complex Rhum Agricole Blanc, with an intriguing and layered blend of herbal, tropical fruit and citrus flavors. I was also introduced to a new tasting term, hogo, which roughly means "high taste" and refers to a certain funky flavor of rum and Rhum that is reminiscent of roasted game meat or something fermented. I didn't think this Rhum possessed hogo, but others might find that flavor there.

From sugarcane to agave. I feel that Mezcal is under appreciated and that Tequila gets all of the positive press, despite the fact they both are agave products. Mezacl, derived from a Nahuatl word meaning "cooked agave," is produced from the pina, the heart of the agave plant. Unlike Tequila, Mezcal can be made from over 30 types of agave, though the most commonly used is the espadin. There are Mezcal distilleries in most of the states of Mexico, and it is often hand crafted by small producers, known as palenques. Known as the "slow food of distilled spirits" as agave takes so long to mature, the pinas are roasted in the earth and the type of wood, from mesquite to oak, used will impart flavor to the mezcal. Because of this roasting Mezcal also always possesses a smoky aspect.

Del Maguey, founded in 1995, produces 100% certified organic single village Mezcal using traditional methods and made by individual family producers. For Mezcal, apparently altitude of the agave leads to significant differences in taste. We began with the Chichicapa, from a low altitude, that had a mild, smoky taste with a little sweetness while the Tobala, from a higher altitude, was smokier and less sweet, with tropical fruit flavors on the finish. The Tobala also possessed more complexity and a greater depth of flavor. Drink more mezcal.
Posted by Richard Auffrey at 4:00 AM

Drink more Mezcal. Got it.

Were these paired with oysters or just each item as an individual expression of terroir or meroir?

They were each generally presented on their own. The oysters were served with the Movia wines.