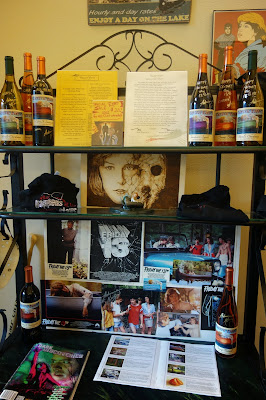 When you visit a winery tasting room, one of the last things you might expect to see is an homage to the Friday the 13th movie franchise, including images of Jason Voorhees, the hockey-masked killer. While in Southern Oregon, wandering around the tasting room of a historic winery, I was surprised and puzzled to find a large collection of Friday the 13th memorabilia in one corner of the room. Why was it there? What did it have to do, if anything, with wine? I'll provide you the answers later in this post. 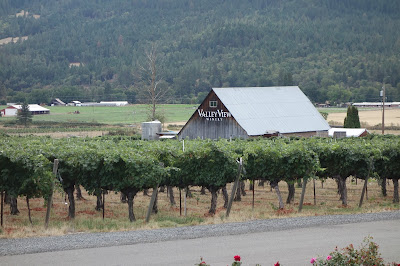 First, let us delve back to the early history of wine in Oregon, and especially Southern Oregon. As I have mentioned before, in the 1850s, Peter Britt, a Swiss immigrant and photographer, came to the Oregon Territory because of gold fever. Though his primary income derived from photography, he tried his hand at mining as well. A man of eclectic interests, he also was intrigued by horticulture and took time to plant orchards, such as pears and peaches, and eventually even grapes. He planted his own vineyards in the Rogue Valley and eventually established, in 1873, the first commercial winery, the Valley View Vineyard, in Jacksonville. 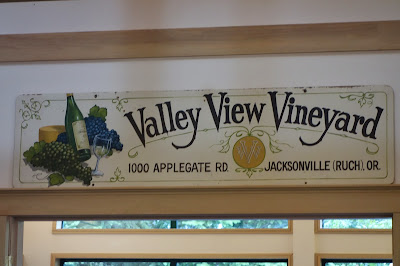 Fast forward about one hundred years to 1972, when the Valley View was purchased and restored by the Wisnovsky family. The father, who had been an engineer, decided that he wanted to become a farmer. The family initially planted twelve acres of grapes, and began as a co-op, selling off their grapes. In 1976, they decided to start their own winery and in 1978, converted a barn into a winery. The Wisnovsky family still owns and operates the winery, and we met Mark Wisnovsky at his winery, and dined there one evening too.

The winery now has about 36 acres of grapes, including one acre of original planted Cabernet Sauvignon, and they grow about 10 different grapes. The vineyard is sustainable and they feel that Tempranillo is now their signature grape. Their site is about 3-5 degrees cooler than other surrounding vineyards, and frost can be an issue, especially as Tempranillo is a later bloomer. Back in 1985, they hired their winemaker, John Guerrero, a graduate of UC Davis, giving him nearly 30 years of experience with the winery. 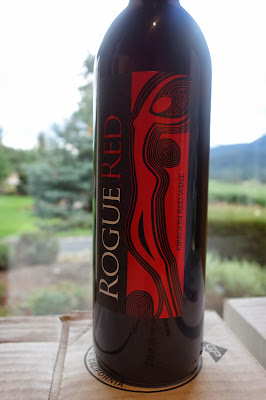 Unfortunately, their wines are generally not available outside of Oregon, except through their wine club and online sales. Within Oregon, one of their outlets is that they sell directly a number of their wines to Costco and Trader Joe's. They have created a special, inexpensive red blend, Rogue Red, which will be available at Costco for $9.99. There are very few wines in Southern Oregon, except for some second labels, which sell at around the $10 price point. That does make it more difficult for people to consider Oregon wines as an everyday purchase. The Rogue Red is non-vintage and each bottle is marked with a Lot number. I didn't get to taste this wine so can't comment on its taste, but I like the concept. 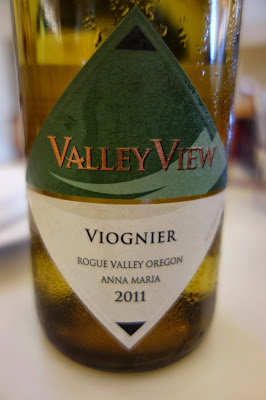 As for those wines I did taste, most with dinner, the 2011 Anna Maria Viognier ($22) was aromatic, crisp and clean with pleasant citrus, pear flavors and floral accents. Easy drinking and delicious, it would be enjoyable on its own or with food. The 2012 Anna Maria Sauvignon Blanc, which has a little bit of Viognier added, also had nice acidity and clean, balanced fruit flavors of grapefruit and citrus. Another easy drinker, with or without food.

Onto reds! The 2008 Anna Maria Cabernet Sauvignon ($24) was a powerful wine, but with restraint, that showcased pleasant ripe plum, black cherry, and spice flavors. Nice complexity at this price point, and best served with a thick steak or hearty Bolognese. The star of the evening was their 2008 Anna Marie Tempranillo ($26), which was dark, spicy, and filled with plenty of black fruit flavors. Complex, supple and with a lengthy finish. Another delicious food wine which will remind you of some Spanish Tempranillo wines.

Overall, these wines are good values at these price points and you should check them out if possible. 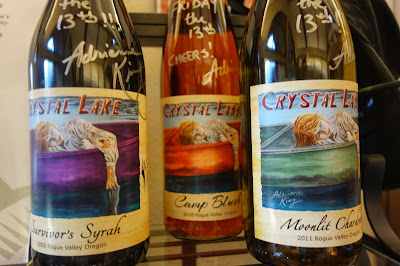 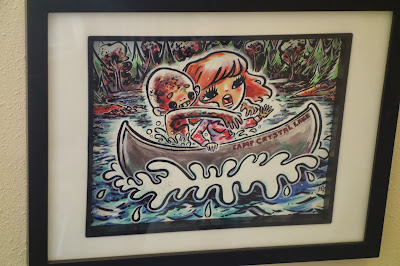 And what about Jason and Friday the 13th?

In the original Friday the 13th movie, the sole survivor of the massacre at Camp Crystal Lake was Alice Hardy. The killer was Pamela Voorhees, whose son, Jason, drowned at the camp about 20 years before, and Alice ended up decapitating her with a machete. At the end of the movie, while resting in a canoe, Alice had a nightmare that the dead Jason, came up out of the water and grabbed her. In the sequel, Alice was murdered, with an ice pick to her head, by the resurrected Jason. The character of Alice Hardy was depicted by actress Adrienne King.

At one point, Adrienne moved to Oregon, loved wine, and eventually worked for a time at Valley View Winery. Together, they created Crystal Lake Wines, which uses specially chosen Valley View wines in unique labeled bottles, including a painting done by Adrienne of her character lying in a canoe on Crystal Lake. That explains the strange homage to the horror movie series. If you know a horror fan, then these wines might be a great gift. As I am a horror fan, I thought it was quite cool that the Valley View made this collaboration and had the courage to showcase it in their tasting room. And as it is their wine in these Crystal Lake bottles, I can vouch that the wine is tasty too.
Posted by Richard Auffrey at 3:00 AM