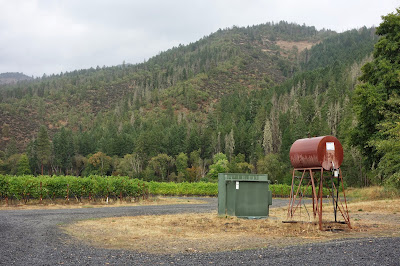 Even if you didn't know it was Biodynamic, the name of Cowhorn Vineyards might clue you in as cowhorn is integral to one of the more famous Biiodynamic preparations. Preparation 500 is essentially a cow horn, filled with a cow manure mixture, that is buried in the ground. The purpose of this preparation is to improve soil structure and microbiological activity. It is considered by some to be one of the key preparations for Biodynamics. Cowhorn Vineyards is the only certified Biodynamic vineyard in Southern Oregon, though you will find a number of others in the Willamette Valley. 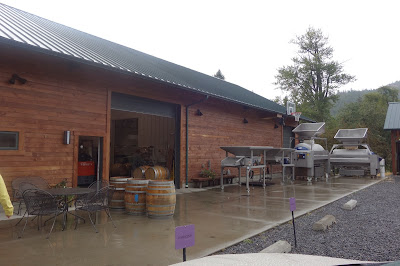 Cowhorn is owned by Bill and Barbara Steele, and this is a second career for them. Bill was a Wall Street analyst for about 20 years while Barbara was involved in accounting and finance. That seems quite removed from owning a vineyard. However, some of Barbara's clients were farmers and she eventually became enamored with farming, desirous of getting involved in the soil. Bill was amenable to a big change and willing to delve into agriculture. They had family in Oregon and after a vacation there in 2001, they decided to move to Ashland, Oregon.

Initially, they had not been wine drinkers, preferring beer, but Barbara's brother was a wine writer, and they eventually started drinking and enjoying wine. Their growing passion for wine led to their decision to start a vineyard and try to make wine. A bold move for two people who had never been involved in farming before. They wanted a blank canvas, something which they could transform into whatever they desired. In addition, they sought an isolated farm with good water rights, and in 2002, finally found what they desired, an abandoned farm. The estate comprised 117 acres, 60 which were flat, and the land reached to the Applegate River. 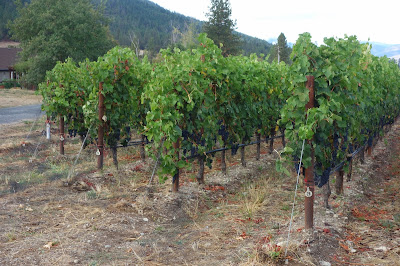 They hired some consultants to analyze their land and it was found to be especially conducive to Rhone grapes. The Steeles initially planted about 11 acres of vines, which has now grown to 23 acres. The vines are densely planted, and nearly all are Rhone varietals. This endeavor was a huge challenge to these novice farmers and there was a steep learning curve, yet they were up for the challenge. For example, they were able to create and construct their winery in only 10.5 months. Everything had to be started from scratch, a formidable endeavor in which they immersed themselves.

Bill stated that prior to moving to Oregon, they had lived an organic/homeopathic lifestyle, and that included their dogs as well. Biodynamics was similar to their philosophy so it was an easy decision to choose to adopt it for their vineyard. Bill is a true believer but doesn't push his ideas on anyone, stating that his philosophy is a choice, a preference, and it is not about right or wrong. The vineyard and winery has been Demeter certified since 2006, and the health of their soil is of utmost importance to them. 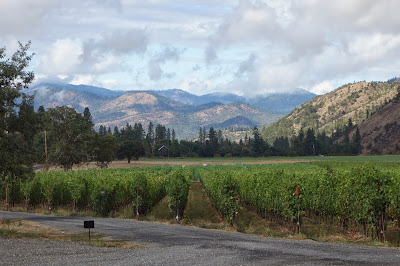 The property has been fenced in since 2004, to prevent animals from wandering onto the property, including mountain lions which inhabit the region. In the future, they may choose to raise their own animals, as they as an important aspect of Biodynamics. At the time of our visit, they hadn't yet begun harvesting, unlike many of the other Southern Oregon wineries, as their site tends to be cooler than many of the surrounding farms. It is a beautiful site, surrounded by mountains, with lots of trees and lush vegetation. There is an air of serenity as well, almost a step back into the past.

Data collection is important to them, allowing them to better understand their vineyard, and that isn't a surprise knowing Bill used to be a financial analyst. That analytical nature might seem incongruent with his embrace of Biodynamics but Bill doesn't feel that it is the case. He stated that his greatest challenge was maintaining his sanity, with so much work that needs to be done, the risks of weather, the unexpected complications, and so much more. It can almost be overwhelming, especially as they had no prior experience. It helps that the people of the wineries of Southern Oregon are very cooperative, and quickly lend assistance and advice when needed. 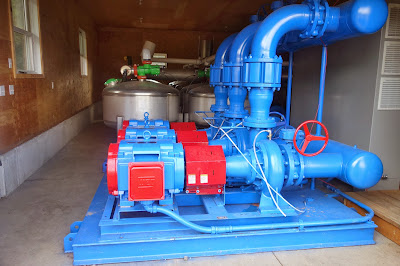 Though the misinformed might think Biodynamic farmers shun technology, that is not the case. For example, Bill's pump house, weighing in at 6 tons, is high-tech, a system of "pure math." And its blue and red colors make it stand out, helping to show visitors the different aspects of the winery. Bill and Barbara hired a wine consultant to assist with wine making, to show them what needed to be done. For their wines, they conduct little filtering and use their own sulfur dioxide. Though their annual production is low, and you might think their wines are only available in Oregon, some of their wines are actually distributed in New York. 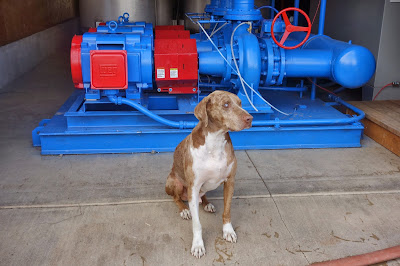 This is Buddy, one of their dogs, and he followed us around much of our tour of the vineyard. He is a mimic, often imitating the actions of those around him. This was more than evident when we were at the vines and Bill encouraged us to taste some of the grapes. Buddy decided that meant he could do the same, and he grabbed an entire cluster of Viognier in his mouth and ran off to enjoy the grapes. I guess he thought they were ready for harvest. 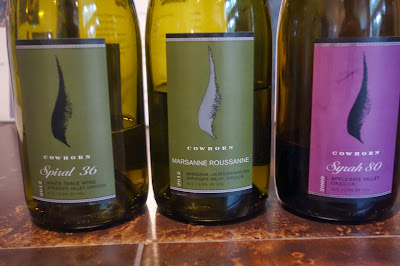 Cowhorn produces a number of different wines, including whites, reds and a rosé, though we only tasted three of their wines. Bill lamented over the difficulties of using Grenache grapes, which could be transformed into a $35 wine, into a Rosé for which he could only charge around $22. That is certainly an issue common to other wine makers too, of how best to use their grapes.

The 2012 Marsanne Roussanne ($28) is a blend of 45% Marsanne and 44% Roussanne 55%, and only 125 cases were produced. The wine spends about 4 months in French oak (83% neutral, 17% new) and has an alcohol content of 13.5%. It too was crisp and clean, with notes of green apple, lemon, and apricot, with a backbone of minerality. Well balanced and a lengthy finish. Highly recommended.

The 2009 Syrah 80 ($35) is made from 100% Syrah, and only 630 cases were produced. It is named "80" because that is the number of frost hours in the growing season. The wine spends about 9 months in French oak (35% new) and has an alcohol content of 13.5%. I enjoyed this wine, finding it possessed a nice depth of flavor, excellent black and blue fruit flavors, a mild spiciness and a bit of floral aspect. It is more a wine of elegance than power, with a long and satisfying finish. A wine that beckons out for roast lamb, a hearty aged steak or a rich meat sauce.
Posted by Richard Auffrey at 3:00 AM