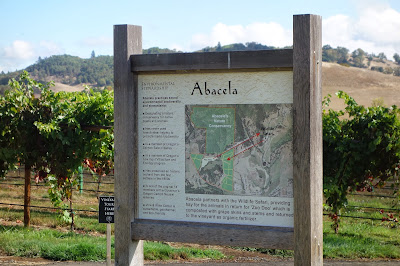 When visiting different wine regions, I usually find a number of wines I would like to purchase, but flying with wine is a challenge. There can be the added cost for additional luggage and the a risk that the bottles might break during the flight. Generally, I'll only purchase one to three bottles, and pack them carefully in my existing luggage. Thus, I need to be very selective in which bottles I decide to transport home. When I recently visited Oregon, I purchased only a single bottle, a high end Tempranillo from Abacela Vineyards. It was a most impressive wine. 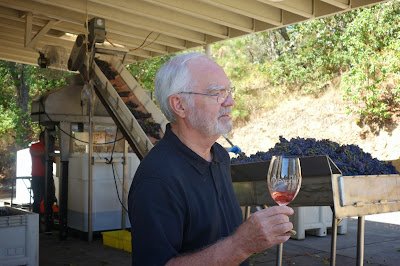 Earl Jones, pictured above, is the owner of Abacela Vineyards and led us on a tour of the winery. Living with his wife, Hilda, in Pensacola, Florida, Earl had a passion for Spanish wine, specifically the Tempranillo grape. From that passion spawned the question for Earl whether Tempranillo could be successfully grown in the U.S.or not. As he searched for an appropriate region, he found that Southern Oregon occupied a similar latitude as sections of northern Spain, including parts of Ribera del Duero and Rioja. Further analysis and investigation, including consultation with his son Greg, led him to believe that Tempranillo could potentially do well in this area. So, in 1992, he purchased land on south sloping hillsides in Umpqua Valley, hoping to fulfill a dream. 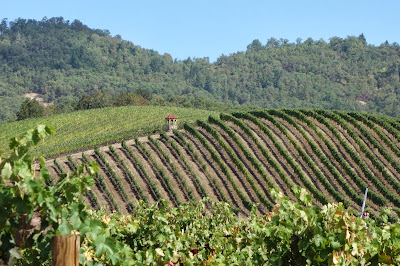 In 1995, they planted the first Tempranillo in the Pacific Northwest and would make their first varietal Tempranillo in 1997. For the name of their winery, they chose an ancient term, "abacela," which is common to the Spanish, Galician and Portuguese languages. The term means "to plant a grape vine," symbolic of their efforts in starting a new vineyard, as well as honoring the Spanish Tempranillo. Besides grapes, they also chose to preserve some 19th century orchards that already existed on the property, which bear pears, apples and oranges. 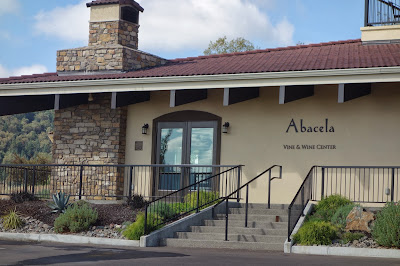 There is a fault line beneath their property, a "bulldozer" fault, which moves north but does not cause any shaking. However, it does mean that part of their soil is approximately 450 million years older than the rest of the soil. Their estate now consists of 500 acres and there are about 76 acres under vine, though they only count the actual area occupied by the vines and not the alleys between the vine rows. Besides Tempranillo, they grow other Spanish and Portuguese grapes, as well as a few others. In all, they grow about 20 grapes, some experimental, as they still seek to determine which other grapes will grow well on their property. Over time, they have stopped growing some grapes as they determined they could not grow them commercially and constantly for 8 out of 10 years. Earl stated that "climate is the dominant factor in deciding what to grow." 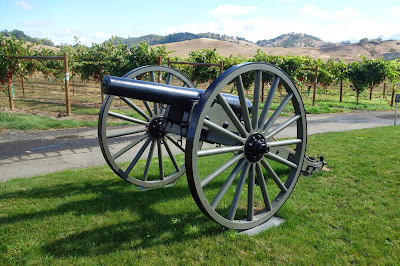 When we first arrived at Abacela, we saw this intriguing cannon, initially suspecting it was merely decorative. However, Earl indicated that it was a working cannon that they found for sale, and now use on special occasions. Not sure there are many wineries that have their own working cannon. Wine thieves beware! 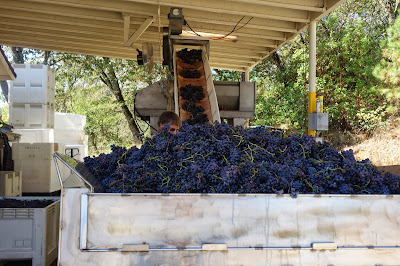 Abacela is very eco-conscious and was one of the first carbon neutral wineries. Outside the winery, there is a series of panels about the winery, including one which outlines all of their eco-conscious programs. For one, they work with Wildlife Safari, trading hay for manure, which they will use for compost/fertilizer. Like many other Oregon wineries, they care about the environment, and work towards supporting it, rather than working against it. 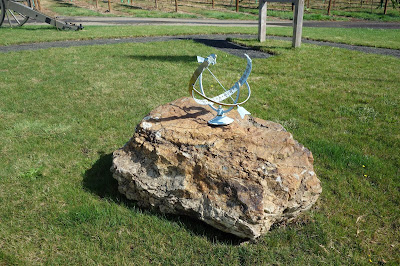 The Abacela property has one of the longest growing seasons in the region and a low frost risk. To monitor matters, there are about 30 weather stations on the estate gathering data. This is not surprising as Greg has assisted his father in understanding the climate, soil and terroir of the estate. In 2013, they have only had about 8.8 inches of rain so far, which is unusual, and they expect to harvest, only hand harvesting, about 200 tons of grapes. Earl stated that it is still too early to determine the signature grape of Southern Oregon. Though he, and now other wineries, are having success with Tempranillo, more time and experimentation is still necessary. Earl conducts plenty of experiments, from different grapes to different barrels. It is a continual learning experience, gathering lots of data each year, constantly seeking to improve. 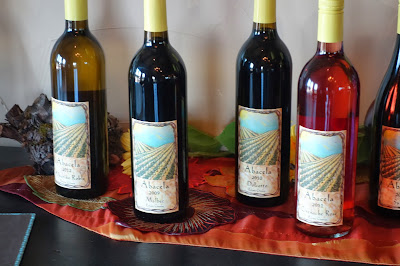 Abacela produces wines including Tempranillo, Dolcetto, Garnacha, Malbec, Syrah, Merlot, Muscat, Albarino, Viognier and more. The wines are distributed in about 27 states, so there is a decent chance that you might be able to find them locally, though they have little distributiion outside of the U.S. Their wines are available in Massachusetts and I strongly recommend that my local readers seek them out. You won't be disappointed.

As we toured the winery, we sipped some of their 2012 Grenache Rosé ($16). They crop tbeir Grenache differently for their rosé than they do their red, and Earl noted that Grenache can be a challenging grape as it needs a long time to ripen. The rosé undergoes only four hours of skin contact, giving it a nice, pink color, and it has an alcohol content of 13.1%. It reminded me more of a French rosé, dry and with restrained but complex red fruit flavors. Delicious, and the type of rosé I prefer to drink. 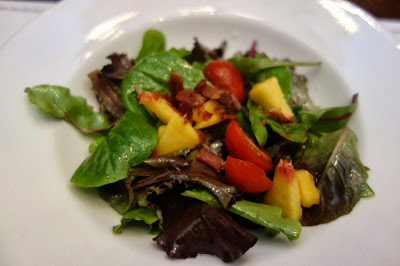 The rest of our wine tasting took place during lunch, which began with a fresh salad of mixed greens, peaches, crispy serrano ham, and a verjus dressing. Tasting wine with food is always a worthwhile experience, giving you a better sense of the wine. 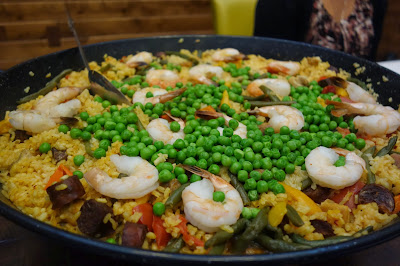 What is Tempranillo without Spanish cuisine? Our main dish was a huge Paella, with chicken, shrimp, chorizo, peas, green beans, tomatoes, and peppers. Compelling and flavorful, I had refills, and probably could have eaten even more. It well well with the wines, and seemed appropriate for much of what we were drinking. Everyone should have more paella in their lives. 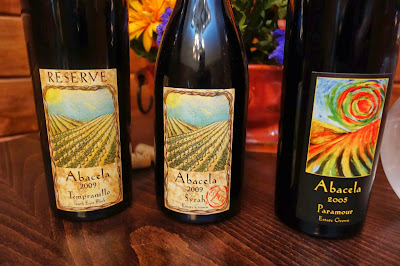 Though Earl stated that the estate is a difficult terroir for Albarino, the 2012 Albarino ($18) was excellent. It was crisp and dry,with pleasant flavors of apple and pear as well as some mineral notes. The finish was long and delicious, and it would make a fine food wine, or be enjoyable on its own too.

Besides Spanish and Portuguese grapes, Abacela also does well with their 2009 Malbec ($25), a smooth and approachable wine with lush black fruit flavors and plenty of spicy notes. Good complexity and a long finish enhance this wine. The 2009 Estate Syrah ($30) is another easy drinking wine, big and fruity with restrained tannins and mild spice and earth elements. 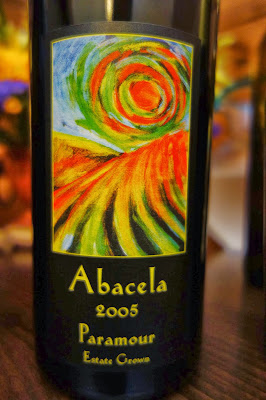 For me, the star of the tasting, and the only wine I purchased this trip, was the 2005 Paramour ($90). Abacela makes 4 different Tempranillos and this is the top of their line. Inspired by the iconic Vega Sicilia Unico, Earl has long desired to make a Gran Reserva style, and the great vintage of 2005 provided him an opportunity. 2005 also happened to be an excellent vintage in Spain too. One key difference between Spanish Gran Reservas and the Paramour is that Earl chose to use French oak rather than American. The Paramour spent about two years in French oak barrels (30% new) and then four years in the bottle. Only 170 cases of this wine were produced, using very much hands-on wine making processes. They believe the 2005 Paramour will reach its full maturity in 2017 and plateau around 2029.They will produce additional Paramour wines, in exceptional vintages.

This was an amazing wine, and reminded me of some high end Spanish Tempranillo wines. From its alluring aromas to its complex melange of flavors, this wine impressed from start to finish. I think it was very drinkable now, and will continue to remain strong for years to come. It is difficult to describe this wine, which is something you need to experience and which mere words cannot adequately encapsulate. Each sip brings new flavors to mind, and it is a wine to slowly savor over dinner, with great friends. Earl should be extremely proud of the Paramour, and this wine is evidence of how well Tempranillo can be produced in Southern Oregon. 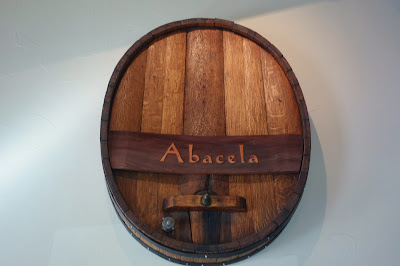 After dinner, we got to try a wine that hadn't been released yet, which had been bottled the week before, the 2008 "Five Year" Tawny Port ($37.50/500ml). They have made other Ports before, since 1999, and were grandfathered by law so they can legally use the term "Port" on their wines. This is their first Tawny style, and unlike many other American style Ports, they use five Portuguese grapes in their blend, including Bastardo, Tinta Amarela, Tinta Cao, Tinta Roriz, and Touriga Nacional. They acquire their brandy from Clear Creek Distillery, and aged this Tawny for five years in neutral oak. Only 200 cases were produced and it has an alcohol content of 19%.

A delicious and complex taste, with plenty of flavor, including raisin, fig, ripe plum, caramel, and nutty notes. Very concentrated flavors, well balanced, smooth and with a lingering finish. In a blind taste test with Portuguese Tawny Ports, you would likely be hard pressed to pick out the Abacela. 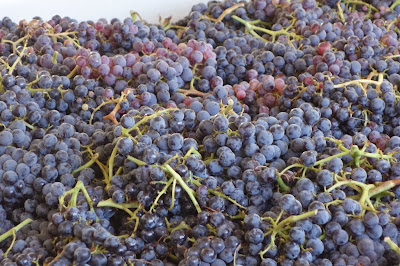 Abacela Vineyards is a star of Southern Oregon, and Earl's dreams have come to fruition in his exceptional Paramour. Much of his success is due to his extensive data collection and analysis of the terroir, which is important for all wineries that are concerned with terroir. Experimentation is still important in Southern Oregon as well, to learn which grapes grow best, which grapes will one day be the signature grapes of the region. If visiting Southern Oregon, make sure to check out Abacela.
Posted by Richard Auffrey at 3:00 AM

Great post! I was just at Abacela during a week-long "escape" from our home wine region (Napa Valley). I was wondering if I could use one of your vineyard photos from your blog (of Abacela) as it is frankly better than anything I took. There are no people in it. Let me know if it is okay with you.

I'll send you a copy of our Abacela post when we publish. In the meantime, you can check out our wine country blog to see where it would be used: www.topochinesvino.com.

Thanks for the consideration.