My Favorite Fiction Books of 2013 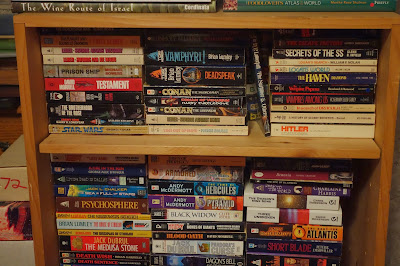 Back in December 2011, I started a blog column, Authors, Alcohol & Accolades, which asked some of my favorite authors about their preferred drinks, both alcoholic and nonalcoholic. There have been 9 editions of this column so far, with a 10th column coming in the near future. The inspiration for this series is that I am a voracious reader, of both fiction and nonfiction, and I wanted to combine that interest with my love of food & drink. The series has proven popular and it has been fascinating to explore what authors enjoy drinking.

As a special year-end addendum to that series, I'm going to post a list of my Favorite Fiction Books of 2013. This list will include books of Science Fiction, Fantasy, Horror and Mystery/Thriller. Please note that some books don't easily fit into a specific genre, and straddle the line between two or more, though I have placed them into one category. Nearly all of these books were published in 2013, except for a few which generally were published at the end of 2012, but which I didn't read until this year. The books are also not in any specific order of preference.

All of these books would make great holiday gifts for others, or even yourself. Support an author, a small, independent business person, and buy more books. 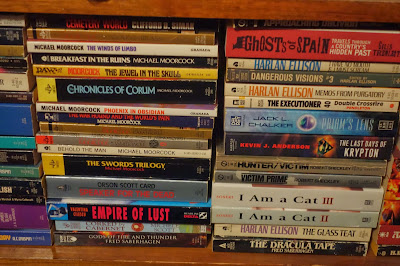 1) Extinction Machine by Jonathan Maberry. The latest book in the Joe Ledger series, dealing with UFOs and aliens. The Ledger books are packed full of breakneck action and thrills, and you'll race through them. James Bond has it easy compared to Ledger. Check out the entire series while I wait for next year's Ledger book, Code Zero.
2) The Lives of Tao by Wesley Chu. An alien invasion, alternate history, espionage, humor and more. There is lots to praise about this exciting book and I'll soon delve into the recently published sequel, The Deaths of Tao. An excellent debut novel.
3) Fear & Anger by Shawn Kupfer. The third book in the 47 Echo series is a gritty, action-packed thriller dealing with a future war against China. And there is even a character in the book named after me because I won a prior contest. Even without that, it is a very cool book.
4) The Human Division by John Scalzi. Set in the Old Man's War universe, this book was originally serialized so almost reads like a series of interconnected short stories. Fascinating situations, intriguing mysteries and Scalzi's prose elevate this book.
5) Doc Savage: Skull Island by Will Murray. Doc Savage meets King Kong? Yes, it is an epic encounter that should not be missed. Murray has been penning a number of new Doc Savage adventures and this has been my favorite by far.
6) Steelheart by Brian Sanderson. This book creates a fascinating near future with superheroes, with some intriguing twists and a compelling setting. Though labeled as YA, it will appeal to adults as well. Looking forward to the sequel. 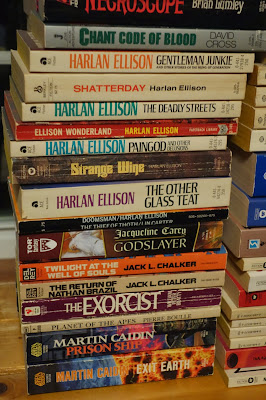 1) Promise of Blood by Brian McClellan. Making a stunning debut, McClellan's book is flintlock fantasy, dealing with the aftermath of a military coup. A magic system involving gun powder, an intricate plot, great characters (including a chef!), and lots of exciting twists. This ranks as one of my top favorite books of the year and McClellan has also written two short stories in this setting which are also worth checking out. I'm very anxious for the sequel, The Crimson Campaign, due out in February. A Must Read!
2) The Six Gun Tarot by R.S. Belcher. A weird western with Steampunk elements, this is a sheer pleasure to read with an exotic collection of strange characters, horror elements, and plenty of action. The west has never been stranger.
3) No Return by Zachary Jernigan. An interesting blend of SF and fantasy, this mythic book will remind you of the works of Zelazny. An epic and inventive book about astronauts, wizards, gods, arena battles, ancient secrets, and so much more. A sequel is in the works.
4) The Flames of Shadam Khoreh by Bradley Beaulieu. This is the conclusion to The Lays of Anuskaya trilogy, making a fitting ending to a complex and unique fantasy saga. Lots of depth to this trilogy, it isn't an easy read but will richly reward a patient reader.
5) A Discourse in Steel by Paul Kemp. A new Egil & Nix adventure, this is a pure fun tale of sword & sorcery, which will bring to mind the sagas of Leiber. An exciting page turner, this book won't fail to please.
6) The Thousand Names by Django Wexler. This debut is the first book of The Shadow Campaigns, and is a detailed military fantasy, with an interesting setting, detailed characters, and lots of martial action.
7) The Big Reap by Chris Holm. The third book of The Collector series is a noirish tale of battles between angels and demons, ramping up the stakes from the prior two volumes. A smartly written tale, it is fun and thrilling, and will make you desire more Collector books.
8) Emperor of Thorns by Mark Lawrence. The concluding novel of the controversial Broken Empire trilogy doesn't disappoint in the least. I've loved these books and Lawrence has provided a very satisfying conclusion. A Must Read trilogy.
9) The Bones of the Old Ones by Howard Andrew Jones. A sequel to Desert of Souls, these books are sword and sorcery set in 8th century Baghdad. With their more unique setting, compelling characters, and exciting thrills, these are thrilling and well written tales and I eagerly await the next saga.
10) Wolfhound Century by Peter Higgins. A fascinating, alternate Soviet history with angels leads to a unique book that is urban fantasy, mystery, and mythic saga. Very cool. 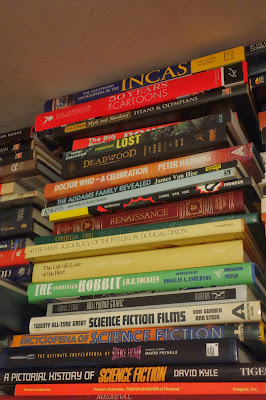 1) Violet Eyes by John Everson. A creepy tale of deadly spiders, this is a visceral tale of horror that might keep you up at night. Its intensity will keep you reading, from one shocking scene to another.
2) American Elsewhere by Robert Jackson Bennett. A mythic horror tale, this seems almost like a blend of King and Barker, with a bit of Lovecraft tossed in. Lots of depths to this tale, this is a very satisfying read, showing that Bennett just keeps writing better novels.
3) Doctor Sleep by Stephen King. This superb sequel to The Shining, is a return to the eerie tales of the early works of King. I haven't been too keen on many of King's newer works, but this impressed me and is a worthy sequel. Highly recommended.
4) Of Fever & Blood and The First Blood by S. Cedric. You may not have heard of these French books, the Inspector Svärta supernatural thrillers, but you should know about them. Well written, intriguing tales, and set in France, they meld police procedural and the supernatural well.
5) Splatterlands edited by Grey Matter Press. This collection of horror short stories pushes boundaries and may disturb you, but they are well written tales which are worthy of attention. Good horror should unsettle you and these stories accomplish that objective.
6) Reanimators by Peter Rawlik. A love letter to Lovecraft, this novel spans many years of history with numerous cool nods to Lovecraft's characters and settings. Reanimation of the dead was never so much fun, or horrifying.
7) NOS2A2 by Joe Hill. Making Christmas creepy, Hill has written a compelling & lengthy novel, which will keep your attention throughout. A terrific villain, a fascinating concept, and an admirable heroine, make this a must read.
8) Terminus by Adam Baker. Starting with the nuking of NYC, the intensity of this book doesn't let up. It involves zombies but is far more about the living and survival. You can feel the tension on every page.
9) The Twelve Fingered Boy by John Honor Jacobs. Another YA novel that is appropriate for adults as well, it involves a teenager with special powers, as well as 12 fingers, who is being pursued, after fleeing from juvie, by a mysterious adult. It is an easy and suspenseful read, and will make you eager to read the sequel.
10) I Travel By Night by Robert McCammon. This weird western novella, set in New Orleans, involves a reluctant vampire who fights evil, and seeks redemption. Very well written, this is a compelling story and you'll wish it were even longer. 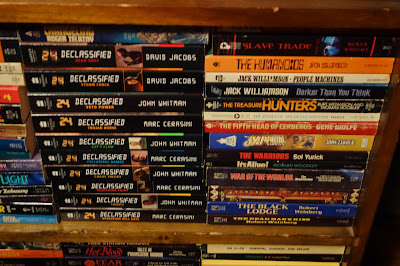 1) The Hard Bounce by Todd Robinson. This quasi-PI book is full of action and twists, with plenty of humor as well. And as it is set in Boston, that makes it even more compelling. An excellent debut novel.
2) The Black Widow Club by Hilary Davidson. A collection of short stories about murder and revenge, obsession and adultery. Women take center place in these dark and twisted tales, and Davidson weaves plenty of fascinating stories.
3) Japantown by Barry Lancet. An intricate murder mystery with an intimate connection to Japan, this is another thrilling and powerful debut that is sure to thrill and entertain.  Highly recommended.
4) Leverage: The Con Job by Matt Forbeck. Based on the Leverage TV series, this novel is set at Comic-Con, and Forbeck does an excellent job getting the TV characters right, and creating a compelling mystery and con job for those characters. A fun read.
5) Murder as a Fine Art by David Morrell. I've long been a fan of Morrell and his latest work doesn't disappoint. This is a historical thriller, well researched, which provides an intriguing murder and mystery. Morrell remains in top form.
6) Evil and the Mask by Fuminori Nakamura. This novel has a fantastic premise, a family tradition of raising a child to be a "cancer," to be a harbinger of misery. What happens when one of those children resists? A thought provoking and thrilling read. Highly recommended.
7) Tell No Lies by Gregg Hurwitz. I have also long been a fan of Hurwitz, and his newest book is a thriller of an ordinary man battling extraordinary circumstances. Suspenseful and engaging, you'll be glued to this book until the end.
8) American Death Songs by Jordan Harper. A collection of intense and hard core, crime short stories. Gritty tales that delve into the darker aspects of man.
Posted by Richard Auffrey at 9:55 AM

mighty fine choices
few of my favorites in there too

Richard, thank you so very much for including our SPLATTERLANDS on your list of Best Of Horror for 2013. We are glad that you enjoyed the collection and are ELATED to find out that it made it's way into the top of your list.