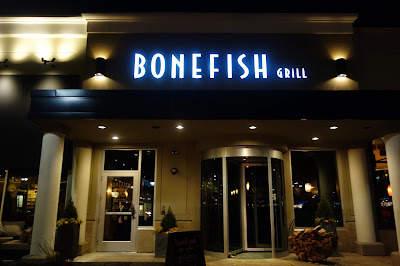 Burlington's restaurant scene continues to grow with the addition of Bonefish Grill, part of a chain of seafood restaurants which originated in Florida in 2000. Now, there are over 150 Bonefish Grill restaurants across the country and the Burlington location is their first Massachusetts site. Located in the Wayside Commons, it occupies the former location of the Ginger Pad restaurant. It opened on November 11, and is now open for dinner, lunch and brunch.

I have visited the restaurant twice now, once for dinner as a media guest, and another time on my own for lunch. Please note that as the restaurant is still very new, it may be working out a few kinks as any new restaurant must do. Even though it is a chain, and some of the details have been well worked out at other locations, there are still potentially issues that will arise at any new location, from service to kitchen issues.

Based on their website, the restaurant is devoted to seafood sustainability and authentication, quite worthy objectives. For example, in selecting their seafood, they use reports and recommendations from NOAA and consult with groups like Ocean Trust. They also conduct some DNA testing to authenticate the identity of their seafood. On their menu, you will find wild and farmed seafood, and it appears that different locations may also carry different sources and types of seafood. My only concern with their seafood selections is that I wished it carried more domestic seafood.

As I have written before, the U.S. imports 91% of their seafood and I have urged people to eat more domestic seafood. For example, I asked about the sourcing of their shrimp and my server informed me they were from the Gulf of Mexico though the manager told me that the shrimp actually came from Thailand. It appears that some of the southern locations of Bonefish Grill do carry Gulf shrimp, but the manager stated that due to the large volume of shrimp they purchase, they had to rely on Asian shrimp. I understand the logistic issues for such a large chain, which don't exist for small, independent seafood restaurants, but I still wish they could find ways to carry more domestic seafood, especially if they are able to do so at some locations.

The interior of the restaurant is very different from the former Ginger Pad, and it now seems more elegant, with a long bar at one end of the restaurant. The interior consists of numerous booths and tables, and they possess an exterior patio which will be great during the summer. On both times that I visited, the restaurant was relatively full and the noise level was very good, despite the crowd. During the evening, they also had free valet parking, which is nice as the parking lot can be quite full, especially during the holiday season.

The dinner menu includes Soups, Salads, Starters (about $4.90-$12.50), Burgers & Sandwiches ($11.90-$17.90), Grilled Fish ($15.90-$29.30), Grilled Specialties ($14.90-$22.70), and Sauteed+Baked ($9.90-$18.90). There were also several dinner and lunch Specials. Prices are reasonable and the most expensive dishes, such as Lobster, are priced as expected. Though many of the dishes are seafood, you'll also find steak, chicken, pork and more. Plenty of variety and any patron should be able to find something to appeal to them. The lunch menu has some less expensive options, as well as fewer choices for Starters, Entrees and Desserts. One oddity is their pricing, with dishes ending in cents like 40, 50 or 70. There is no reason for this, it is merely a matter of whimsy. 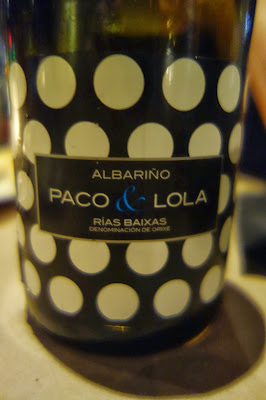 The wine list has over 40 selections, with most available by the glass, and the prices generally seem to be around 2X retail, which is average. There are lots of well known, large brands on the list, especially from California, so the average consumer will find plenty to appeal to them. If you are seeking something from smaller, more artisan producers, you won't have much luck. I did get a bottle of the Paco and Lola Albarino ($40), which is an enjoyable Spanish white that I would recommend.

You can also order a cocktail, like one of their Martinis (about $8 each), or a beer, from a list of about 20 choices with several on tap. Cocktail prices seem reasonable, especially compared to many other places which charge $10 or more for their martinits. 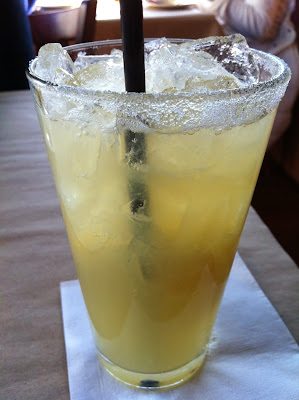 For non-alcoholic choices, you can opt for the House-Made Lemonade ($3.50), made with fresh pressed lemon juice, organic agave nectar and a little homemade lemongrass simple syrup. Tasty and not overly sweet, it was refreshing. Only caveat is that the glass contains so much ice that the actual amount of lemonade is relatively small. 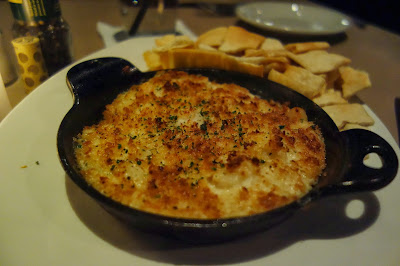 For dinner, we began with a couple Starters, including one of the Specials, the BFG Imperial Dip ($9.40), which is made with four cheeses, crab meat, shrimp, and scallops. The dip was creamy and cheesy, with plenty of seafood, and it had a nice taste to it. It was accompanied by crispy pita chips which I felt were too thick for the dip. I would have preferred a thinner cracker which didn't detract as much from the dip. 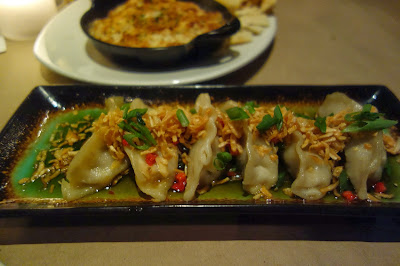 The Waygu Beef & Ginger Dumplings ($8.70) are pan-seared with crispy shallots, crispy garlic, Thai peppers and soy sauce. Filled with lots of meat, these were compelling, with a nice balanced blend of tastes and textures, enhanced by the crispy shallots and garlic. Not the type of dish you expect at a seafood restaurant but it is highly recommended. And with six dumplings, it is a good value too. 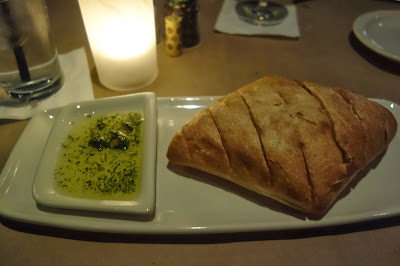 A warm loaf of bread with a pesto oil was brought to the table, and of course that appealed to my heart. Warm bread is so enticing, and the pesto oil had a little spicy kick to it. I fully understand why their bread is so popular. 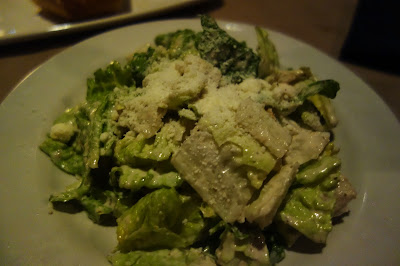 The Classic Caesar Salad ($3.30 with an entree) was good sized, with plenty of fresh Romaine, grated Parmesan and crunchy little garlic croutons. 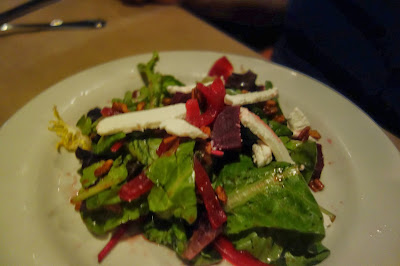 The Beet and Goat Cheese Salad ($4.70 with an entree) includes pickled beets, candied pecans and strips of goat cheese. Another fresh and good salad. 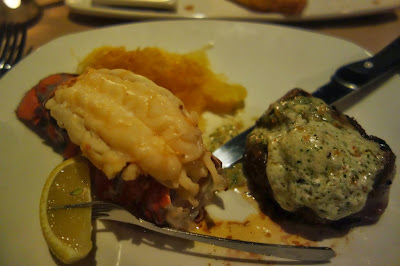 For an entree, I chose a Special, the Lobster & Steak Duet ($22.90), which includes a steamed lobster tail, with drawn butter, and a 6 ounce Filet Mignon (which I had with an added garlic/gorgonzola butter on top). Cooked perfectly rare, as I requested, the filet was delicious, especially enhanced with the pungent taste of the gorgonzola. It may be a seafood restaurant, but they did an excellent job with the steak too. The lobster was also cooked nicely, and it was sweet and tender. The simple butter was all it needed. 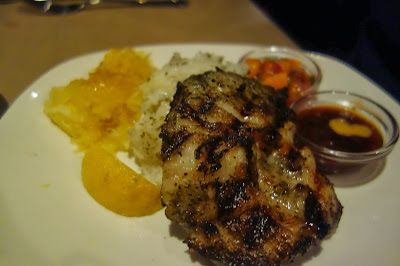 The Chilean Sea Bass ($24.50 for the small) is one of their grilled fish options. With your fish, you can have one of four sauces, from Mango Salsa to Pan Asian. The Sea Bass was tender, moist and sweet, and the Pan Asian sauce complemented it well. Accompanying every entree is a seasonal vegetable (which was spaghetti squash this time) plus your choice of a side. 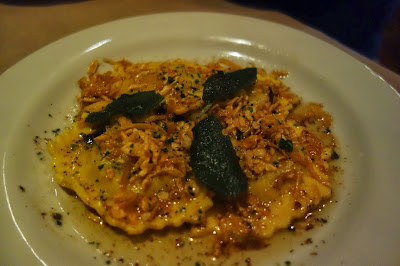 There are eight sides, ranging from Garlic Whipped Potatoes to Steamed Asparagus, though I chose the Pumpkin Ravioli (an extra $2), with crispy sage and shallot brown butter. The crispy shallots and garlic enhanced this dish as they had the dumplings. The ravioli pasta was just the right thickness, and the sweet pumpkin filling was excellent. I almost could have made an entire meal of these ravioli. 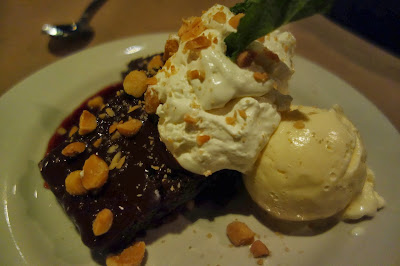 The Dessert menu only has four choices but I don't think you need to look past the Macadamia Nut Brownie ($6.30). It includes a flourless brownie, topped with raspberry sauce, home-made whipped cream, vanilla ice cream, and sprinkled with macadamia nuts. It is large enough for two people to share, though you might be tempted to eat it all by yourself. The brownie is moist and rich, with lots of fudgy flavor, and the raspberry sauce is mild, accenting the brownie without overpowering it. The whipped cream and ice cream enhance the dessert, and the nuts add both flavor and texture. Highly recommended. Save room for this dessert. Unfortunately, this dessert is not available at lunch. 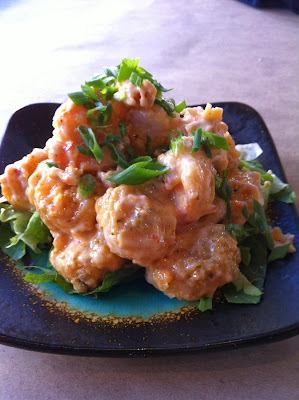 During my lunch visit, we began with a starter, the Bang Bang Shrimp ($9.90), which is one of their signature dishes. The crispy shrimp are topped with a creamy and mildly spicy sauce. They were a big hit with everyone, and the shrimp had a nice, crispy coating rather than falling limp under the sauce. 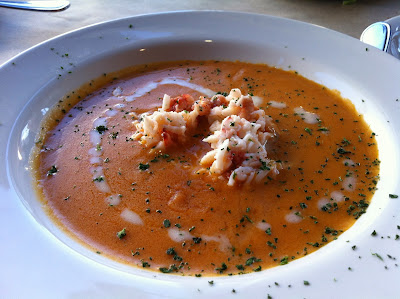 The Lobster Bisque was a Special, There was plenty of sweet lobster meat, it was spiced nicely but I found the bisque itself to be a little too thick and heavy for my preferences. 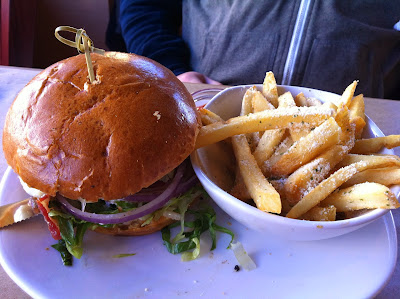 The American Kobe Burger ($8.90) comes with lettuce, tomato, onions and a special sauce, and you can add cheese or bacon. Each sandwich comes with a choice of Parmesan fries, pesto couscous salad, or Asian slaw. I was told the burger was excellent, and it certainly looked very appealing. And it is at a good price for a burger and fries. 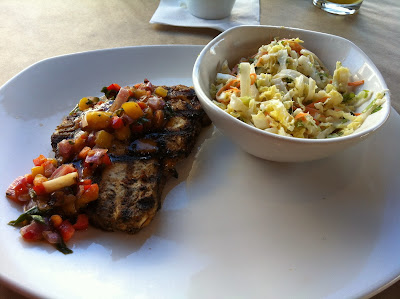 The Grilled Fish of the Day ($14.90) was Swordfish, which was covered by a mango salsa and accompanied by the Asian slaw. Moist and flavorful, this was another good choice. 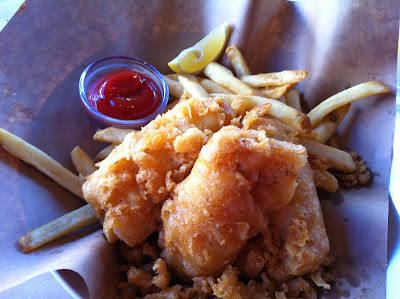 I decided on the Fish + Chips ($8.90), which is tempura-style and accompanied by Parmesan fries. Unfortunately, my fries lacked any Parmesan, a mistake on the kitchen. The fish was excellent, with a light and crispy batter and plenty of sweet, flaky white fish. You receive three pieces of fish, which is a good sized portion for lunch and the price. I'd recommend this dish.

Overall, I was pleased with the Bonefish Grill. It is reasonably priced, portion size is good, and flavors are very nice. Service was excellent, and it would be a nice place for a romantic date or a group of friends hanging out. I wish the wine list had better options and that the menu included more domestic seafood. If you are in Burlington, consider checking out Bonefish Grill.


Every time we encounter failure and disappointments in life, we run to our friends first rather than to our parents maybe because we are more confident to tell everything to them.Our parent can also be our friend, but sometimes we distance ourselves to them because of fear wich should not be in our mindset. Visit my site #n8fan. Thanks.

This is really an interesting topic. Congratulations to the writer. I'm sure a lot of readers having fun reading your post. Hoping to read more post from you in the future. Thank you and God bless!

Among all foods, seafood is the most nutritious food. Most seafood is delicious, nutritious, high in protein, low in fat, low in calories and easy to digest. It also contains a lot of amino acids, vitamins, iodine, calcium, zinc and other beneficial substances. Seafood testing