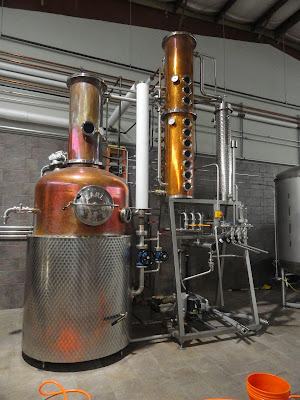 What were some of my favorite spirits and drink-related items of the past year?

Let me continue the lists of my best recommendations and favorites of 2013. I have already posted my Top Ten Wines Under $15, Top Ten Wines Over $15, Top Wines Over $50 and Favorite Wine Related Items lists. This post will now concentrate on some of my Favorite Spirits and Drink Related Items. This is certainly not a complete list but it is more a sampling of compelling and memorable matters I have experienced and posted about over the past year.

This is also a purely subjective list, based on my own preferences, and makes no claims about being the "best" of anything. But all of the items here have earned my strong recommendations and I hope you will enjoy them as well. This is the first year that this category has been given its own post because I have tasted and reviewed a far greater amount of spirits, cocktails and other drinks this year. For more spirits and drink related items, you can just search my blog posts for the past year.

Favorite Spirit & Cocktail Event: Last month, Thirst Boston was held at the Hotel Commonwealth, a three day event dedicated to the diversity of spirits, cocktails and other drinks. There was myriad of interesting and informative seminars, tasting rooms, several parties and much more. The event was well organized, and everything seemed to run smoothly. It was educational and fun, with lots of great drinks available, from Bourbon to Beer, Sherry to Hard Cider. I hope that Thirst Boston returns next year.

Favorite Bourbon: I've been a fan of Four Roses Bourbon for the last two years, and even visited the distillery last year. This year, Al Young, their brand ambassador, historian and archivist, came to town and I met him, tasting bourbon at a lunch at jm Curley. At jm Curley, they purchased their own barrel of Four Roses Single Barrel Bourbon, and even designed the bourbon recipe. Though it was 123 proof, it still was smooth and spicy, and didn't seem that alcoholic. I could easily sit and sip that bourbon, savoring its taste.

Favorite Rye Whiskey: At Thirst Boston, I had the opportunity to taste Dickel Rye, which has only been out for about a year. It is made from 94% Rye, is about 5-6 years old, and undergoes cold filtration, making it taste smoother and mellowing some of the spice notes. I was impressed with this Rye, especially as it is priced around $25 or so.

Favorite Whiskey Tasting: As I have mentioned before, Japan is producing killer whisky, but much of it hasn't come to the Boston area yet. Thus, when I had the opportunity to taste some Nikka Japanese Whisky, I was excited to sample them. The Nikka seminar was informative, and we tasted several whiskies, both straight and in cocktails. My favorite was the Taketsuru Pure Malt, a whisky of power and balance, complexity and rich flavors. It was smoky with peaty notes, with elements of autumn baking spices, apples, caramel, cocoa and more. So much going on in this whisky, and the finish just lingers in your mouth.

Favorite Irish Whiskey: The Tyrconnel Single Malt ($72) is a Single Malt Irish Whiskey that is aged for ten years, including 8 months in a Port cask. The whisky is smooth and complex, with notes of vanilla, honey, citrus, red berries, spice and caramel. Everything is well balanced and the finish is lengthy and pleasing. A fine sipping whisky.

Favorite Sour Mash Whiskey: The Michter's Original Sour Mash Whiskey uses a proprietary mashbill made from a special selection of grains and is aged in charred, new American white oak barrels. Up front, there was an interesting and complex melange of flavors, including vanilla, orange peel, caramel and chocolate notes (reminiscent of a less sweet bourbon) while the finish came with more subtle spice notes, bringing to mind a pleasant rye. Smooth and easy drinking, there was no bite on the finish. Another fine sipping whiskey.

Favorite Rum: The Papa's Pilar Dark Rum is now available in Massachusetts. The company purchases a variety of rums sourced from Florida, the Caribbean, and Central America. Those rums are then aged, using a Solera process, in used Bourbon and Port barrels, blended and then finished in Sherry casks. The Papa's Pilar Dark is composed of rums, aged up to 24 years, that were created through both pot and column distillation. On the nose, there are intriguing smells of spice and honey, caramel and salted nuts. The smells are reflected in much of the complex taste, with deep flavors of caramel and earthiness, strong spice and vanilla, and notes that will remind you of Bourbon and Amontillado Sherry.

Favorite Rhum: Made on the island of Martinique, the J.M. Rhum Agricole Blanc is a Rhum Agricole, made from sugar cane juice rather than molasses. Rhum J.M. was founded in 1845, and the Agricole Blanc impressed me. It was complex and intriguing, with a layered blend of herbal, tropical fruit and citrus flavors. It would be good on its own or used in a cocktail.

Favorite Mezcal: Mezcal loses out on publicity to tequila, yet mezcal is worthy of far more attention. Del Maguey, founded in 1995, produces 100% certified organic single village Mezcal using traditional methods and made by individual family producers. The Del Maguey Tobala is produced from a higher altitude, making it smokier and less sweet, with tropical fruit flavors on the finish. It also possesses nice complexity and a greater depth of flavor..

Favorite (and most suprising) Vodka List: While visiting Provincetown, I dined at The Mews Restaurant & Cafe and was surprised to find that they have a vodka list with over 260 selections! There were vodkas from all over the world, including countries you might never have thought made vodka. I tasted a couple vodkas I had never had before, and was amazed that this restaurant possessed so many different vodkas. The food was very good too, so if you visit Provincetown, you should make a stop here.

Favorite Ginger Beer: Locally produced, the Green River Ambrosia Winery Ginger Libation was a nice find. It is touted as a "pre-Prohibition style ginger beer" and a "spicy alcoholic ginger soda." It is sweetened with cane sugar, pineapple, and citrus juices. It is technically a ginger wine rather than a beer as no malt is used. However, it tastes very similar to a ginger beer, lightly effervescent with a strong ginger flavor and mild sweetness. Perfect for a Dark n' Stormy cocktail.

Favorite Simple Cocktail: At a Thirst Boston Sherry seminar, I met Derek Brown (writer, mixologist and owner of Washington, D.C. bars The Passenger, The Columbia Room, and sherry bar, Mockingbird Hill). He invented the PX Sweet Tea cocktail, a simple mix of Pedro Ximinez Sherry and Black Tea. I've since made it a couple times on my own, and enjoy its flavors, as well as giving me something to do with my PX sherries.

Favorite Hard Cider: Made in Somerville, Bantam Cider has created a couple new products, both which impressed me this year. The Bantam La Grande Barrel Aged is a blend of local apples, including about 40% of Reine de Pomme, a French heirloom cider apple. It is fermented dry and no honey is added. The cider is aged in 60 gallon used barrels, about 60% bourbon and 40% rum, for about four months. It is a dry cider, with a lean, crisp and clean apple flavor and a mild effervescence, lightly refreshing bubbles. On the finish, it possesses an interesting and subdued bourbon flavor. The Bantam Rojo is made with sour cherries and black peppercorns. It is mostly dry, with a sour aspect up front, and a prominent cherry flavor throughout with a mild peppery note in the background. Delicious and interesting.

Favorite Beer: I am generally not a beer guy so you rarely see beer reviews on my site. But this year I tasted a beer which appealed to me, The Trou du Diable La Grivoise de Noel is a Belgian Strong Dark Ale, and is a seasonal beer, made for the Christmas season. However, it may actually taste better with some aging. This beer is a melange of alluring spices, from cinnamon to cardamom, with notes of caramel, dried fruit and nuts. There is a slight sweetness to this silky smooth brew, and none of the bitterness I dislike. In some ways, it reminded me of an aged Sherry. I could easily drink this beer.

Favorite Beer Store: The New England Annex of the Craft Beer Cellar opened this past summer in Winchester, and they carry about 400 beers, all made in New England and at least half of them in Massachusetts. They also carry a little Sake, Mead and Hard Cider. This is an excellent place to find plenty of local beers and is well worth checking out.

Favorite Milkshake/Frappe: This category is a tie, between Bobby's Burger Palace and Pazzo Gelato Cafe. At Bobby's Burger Palace, located at the Burlington Mall, they have about ten milkshake flavors, which are topped by homemade whipped cream. I've had a few different flavors, including Vanilla Bean and Coconut, and each was rich, creamy and flavorful. Pazzo Gelato Cafe uses their homemade gelato to make excellent frappes, which have a nice creaminess to them. Bobby's frappes have a slight edge over Pazzo, only because they are less expensive.

Favorite Tea Drink: Another tie, both choices are locally produced. The Motto Sparkling Matcha Tea was launched in late 2012, and is crafted with premium matcha, basically ground green tea, as well as apple cider vinegar, honey, organic agave, lemon juice, sparkling water and "other natural flavors." It has a clean flavor with a prominent green tea taste, a mild sweetness, and a little citrus on the finish. The renamed Evy Tea produces three different flavored teas, each which is cold brewed. The Amber is made from oolong tea, rosemary and orange zest. It is fresh and clean, with subtle roasted tea flavors, enhanced by bits of herb and citrus. The Decaf Green Tea with Figs and Pomegranate is also clean, with strong fruit flavors that accent the green tea flavors.

Favorite Spirits/Drinks Book: A fascinating historical work, Whiskey Women by Fred Minnick describes the role that women have played in the history of whiskey, from back to ancient Sumeria where women were involved in beer production. The book is filled with plenty of intriguing historical incidents and anecdotes, showcasing women's significant contributions to the whiskey industry. Well written, and easy to read, this book is highly recommended.

Runner-Up Favorite Spirits/Drink Book: The Drunken Botanist looks at alcohol in a unique way, through the plants that create those spirits. There is tons of information in this book, with cocktail recipes, historical anecdotes, botanical facts and more. It doesn't need to be read cover to cover, but you can explore those chapters which most interest you at first, and then return to read the rest of the chapters.

What were some of your favorite spirits and drink related items this year?
Posted by Richard Auffrey at 3:00 AM