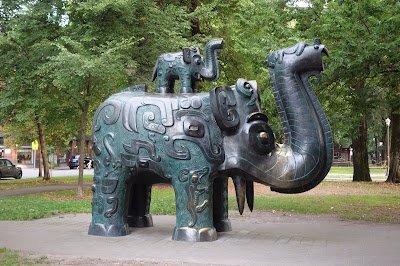 My recent visit to Oregon ended in Portland, the largest city in the state, and a place that I really enjoy. On my last trip to Portland, I had a great time exploring the city, and continued my explorations again this time. Portland has an assortment of nicknames, including Rose City, Stumptown, Bridgetown, Puddletown, and Rivercity. Though the name "Portland" derives from Portland, Maine, the city almost became the second "Boston." Maybe that is why I feel a special affinity to Portland. 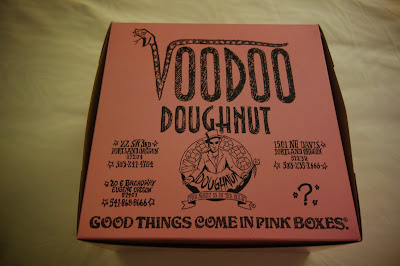 Back in 1843, Asa Lovejoy, who had been an attorney in Boston, Massachusetts before setting off to the Oregon Territory, acquired half of a claim to 640 acres on the Willamette River. Two years later, the co-owner sold his share to Francis Pettygrove. Asa and Francis wanted to name their new town but couldn't agree on a choice. Asa wanted to name it Boston while Francis wanted Portland. To decide between the two names, they left it up to a coin toss, a two out of three flip. Francis won, so the town was named Portland, and the coin is now held by the Oregon Historical Society. 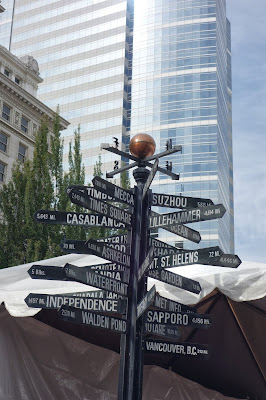 Any food and wine lover, and actually any traveler to Portland, should make a stop at Powell's Books, the largest independent brick-and-mortar bookstore in the country. Their main store occupies an entire city block, has three floors, and nine, large color-coded rooms filled with new and used books of all types. They have a large section of food and wine books which is well worth checking out. I never fail to find something I want. You could spend several hours browsing through the entire store. On my last visit here, I found a few used books that I was seeking, and they were much cheaper than buying them online. And as it is an independent shop, and not some large chain, you can feel even better by supporting them. 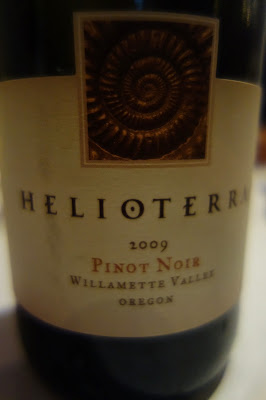 Portland has become a hot spot for urban wineries, and it appears that only Seattle has more such wineries than Portland. Currently, there are at least 14 urban wineries in Portland, with more on their way. Some of those wineries include Helioterra Wines, Division Winemaking Company, Clay Pigeon Winery, Boedecker Cellars, and Vincent Wine Company. Though I didn't have time to visit any of these urban wineries, I was able to taste a few of their wines.

During dinner one evening, we ordered a bottle of 2009 Helioterra Willamette Valley Pinot Noir (the current release, 2011, is about $24 retail). Helioterra Wines was founded in 2009 by Anne Hubatch, who is also the winemaker. Originally from Wisconsin, she came to Oregon and found her passion for wine. The name of the winery derives from Heliolite, the state gemstone which is also known as Sun Stone, and Terra, the Greek word for "earth." Anne describes Helioterra wines as “a grounded, honest expression of her winemaking style, reflecting feminine sensibilities.” She produces Pinot Noir, Syrah, Mourvedre, Pinot Blanc, Melon de Bourgogne, and Pinot Noir Rosé.

The 2009 Helioterra Willamette Valley Pinot Noir was about $22 on its initial release and only 248 cases were made. It is a blend of Pinot Noir grapes from three Willamette Valley vineyards, including Apolloni Vineyard, Buckhaven Vineyard, and Domaine Coteau Vineyard. The light red colored wine had rich flavors of cherry and strawberry, with hints of lavender and herbs. It was an elegant and tasty Pinot, with plenty of depth of flavor and a satisfying finish. At this price point, it makes for a good value wine. As one of the first wines from this winery, I am intrigued to try some of Anne's newer wines. If you are in Portland, check out this urban winery. 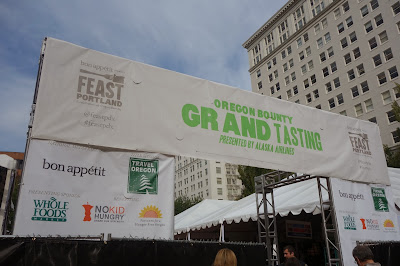 During the time of my visit to Portland, they were celebrating Feast Portland: A Celebration of Oregon Bounty, an event which showcases "local culinary talent and Oregon ingredient" over the course of four days. Coupled with all the fun is a serious objective, to end childhood hunger. The event donates its net proceeds to two charities: No Kid Hungry-Share Our Strength and Partners for a Hunger-Free Oregon. Feast Portland holds numerous events, including several marquee events, a dinner series, tasting panels, a speaker series, and a brunch series. There is so much to do, all across the city, whatever your food and wine interests. 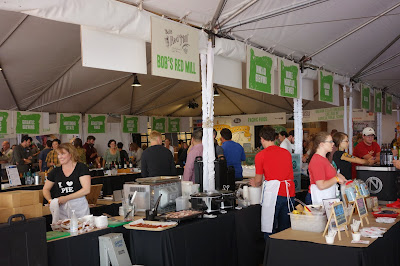 Due to time constraints, I only attended one of the events, the Oregon Bounty Grand Tasting on Friday, which was also held on Saturday. Held in Pioneer Courthouse Square, this event showcased dozens of local producers, of artisan foods, beers, wine and more. For example, there were over 12 breweries and 30 wineries represented here. Though it was a bit rainy, most of the event was under cover so the weather was not a serious issue. The event ran for five hours, and it was only during the second half that it started getting crowded. 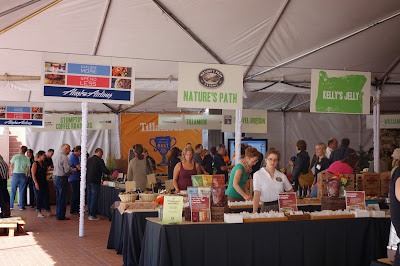 Overall, it was a fun and tasty event, with much to please your palate. It also seemed to be well organized and I didn't notice any significant problems. I'm going to highlight some of my favorite foods and wines from the event, though realize there was plenty more that I haven't mentioned or didn't have the opportunity to taste. 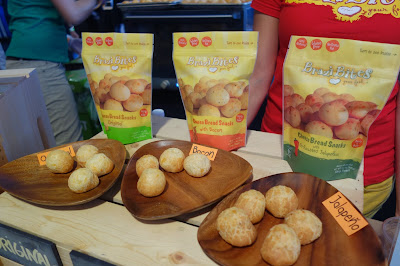 My favorite new food find was the Brazi Bites, a type of pão de queijo, or Brazilian cheese bun. The Brazi Bites are all natural, with no preservatives or artificial ingredients, and they are gluten free as well. Their basic ingredients include cheddar, parmesan, water, safflower oil, milk, eggs, salt, and tapioca starch. There are currently three flavors, including Original, Bacon and Jalapeno, and they are sold in 20 count packages for about $5.99. They are not yet available on the East Coast but hope to make them available around Spring 2014.

Easy to prepare, you just take them out of the freezer and bake in the oven. I tasted all three flavors, and stopped by the table multiple times to sample more of them because they were so good. They were light, with a crispy exterior but a soft and chewy interior, with plenty of cheese flavor. The Bacon added a salty and slightly smoky flavor while the Jalapeno added a spicy kick to the finish. This makes for an addictive snack or appetizer, so easy to just pop one after another into your mouth. And for a gluten free snack, these are a great option which doesn't sacrifice taste in the least. 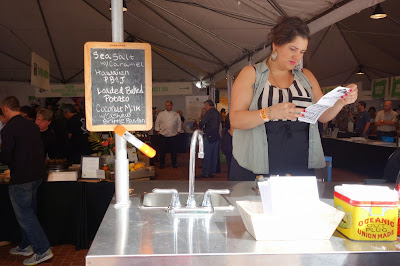 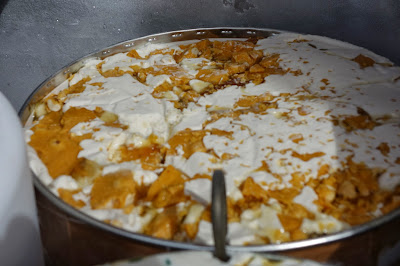 On my last visit to Portland, I was impressed with the creative ice cream flavors from Salt & Straw, and they brought some intriguing flavors to the Grand Tasting, from Hawaiian PB&J to Loaded Baked Potato. I loved the Coconut Milk with Cashew Brittle & Pandan Chiles which had bits of crystalized pineapple and a nice spicy kick on the finish. Creamy and crunchy, the ice cream had plenty of harmonious flavors and I would highly recommend it. The Mint & Sea Urchin ice cream sounded promising, but it was a bit of a letdown as the mint seemed to overpower the briny sea urchin flavor. I wanted more sea urchin flavor, which I think could work with the sweet but maybe something other than the mint would be a better accompanying flavor. If you visit Portland, you need to stop by Salt & Straw. 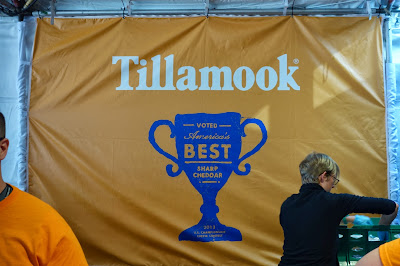 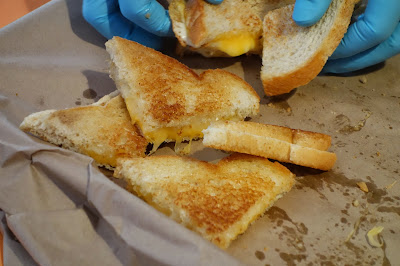 Tillamook Cheese has a great reputation, as well as a lengthy history in Oregon, over 100 years. Some of their products are available on the East Coast, though their ice cream is not available here yet. They are best known for their cheddar cheese and I have enjoyed some of their cheeses on several occasions. At the Grand Tasting, they offered grilled cheese sandwiches, made with Sharp Cheddar Cheese and Monterey Jack. The cheese melted well, was creamy and flavorful, and made for a damn good grilled sandwich. Simple but tasty. 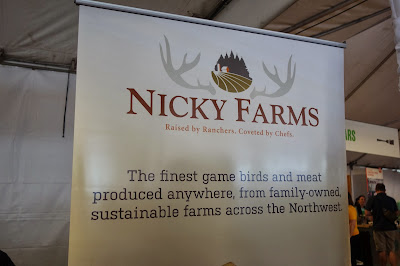 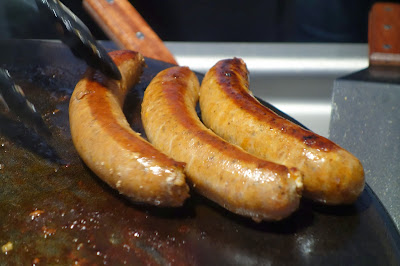 Nicky USA is a purveyor of meat, poultry and game from family-owned and sustainable farms & ranches across the Northwest. You'll find everything from elk to turkey, venison to duck. They also sell over 10 different types of sausage, and they offered a few of these at the Grand Tasting, including the Sardinian Sausage (nice and spicy), the Toulose Sausage (meaty and juicy) and the Garlic-Black Pepper Uncured Salami (spice and lots of flavor). 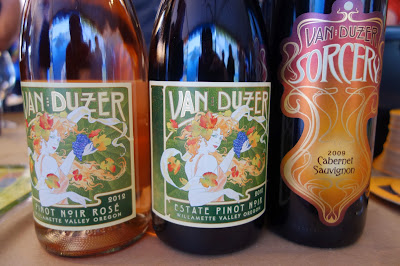 Van Duzer Vineyards, founded in 1998 and located in the Willamette Valley, has 82 acres of sustainable vines and primarily produces Pinot Noir and Pinot Gris. The 2012 Pinot Noir Rose ($18) was lightly pink, dry and crisp, with nice flavors of strawberries and raspberries. An easy drinking wine, appropriate for year round drinking. Their 2010 Pinot Noir Estate ($32) is made from a blend of Pinot Noir clones, has an alcohol content of 12.9%, and presents a light, smooth and pleasant taste. Bright cherries, vanilla, and hints of spice on the finish. 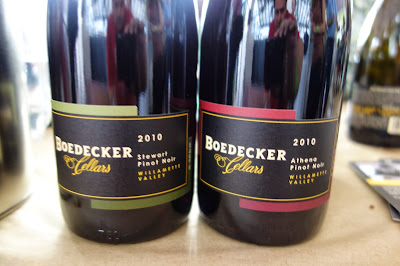 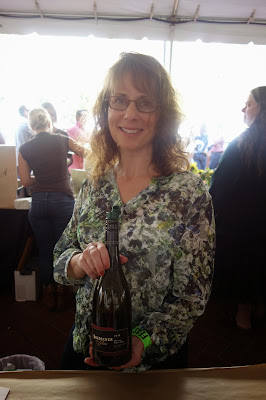 Boedecker Cellars is an urban winery in Portland, owned and operated by Stewart and Athena (pictured above) Boedecker. They started the winery in 2003, currently produce about 8500 cases, and the wine is available in Massachusetts. Though they make Pinot Noir, they each have their own different preferences with Stewart enjoying more elegance and subtlety while Athena enjoys more richer, earthier and muscular Pinot. I got to taste both wines, and preferred Athena's Pinot. The 2010 Stewart Pinot Noir, Willamette Valley, ($34) is elegant and smooth, with bright red fruit flavors, a mild vanilla, and slight herbal notes. A very nice wine which is likely to appeal to most wine lovers. The 2010 Athena Pinot Noir, Willamette Valley, ($34) possesses its own elegance, but is more dark and brooding, with black fruit accents, rustic earthiness and dark spices. Plenty of complexity, a lengthy finish and it would pair perfectly with roast lamb. Highly recommended. 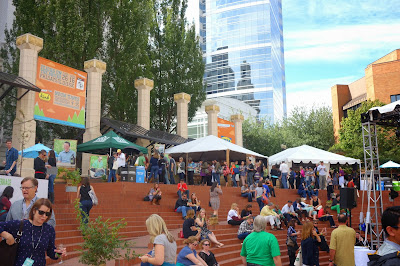 Division Winemaking Company is another urban winery, and their first wines are from the 2010 vintage. They primarily make Pinot Noir, Chardonnay and Gamay. I enjoyed their 2012 Chardonnay ($21), which had been bottled only a couple days before and only 115 cases were produced. The wine was barrel fermented and aged for about 10 months in 20% new French Oak, 60% neutral French Oak & 20% stainless steel. Crisp and clean, it possessed bright apple, pear and vanilla flavors with a nice richness to it, and hints of herbal notes. A very good value for this complex and delicious wine.

Apolloni Vineyards is a family owned vineyard, founded in 1999, in the Willamette Valley, which specializes in Pinot Noir and Italian-style wines. I found excellent value in the 2011 Pinot Blanc ($15), which sees no oak and has an alcohol content of 12.5%. It is crisp and fruity, delicious pear and citrus, with some minerality, especially on the finish. Easy drinking but with plenty of character for the price. Great on its own or paired with food.

Penner-Ash Wine Cellars, which started producing wines in 1998, now makes about 9000 cases of wine annually. They recently purchased Dussin Vineyard, which is now their estate vineyard. Their 2012 Viognier ($30) sees only stainless steel and presents plenty of crisp, fruit flavors including peach, orange and lemon. It wasn't overly aromatic and its clean flavors make it delicious on its own. The 2011 Estate Dussin Vineyard Pinot Noir ($60) certainly showcases the wonders of this vineyard, presenting an elegant Pinot with a delightful balance of acidity, fruit and spice, with plenty of complexity and depth of flavor. A Pinot to slowly savor and enjoy.
Posted by Richard Auffrey at 3:00 AM