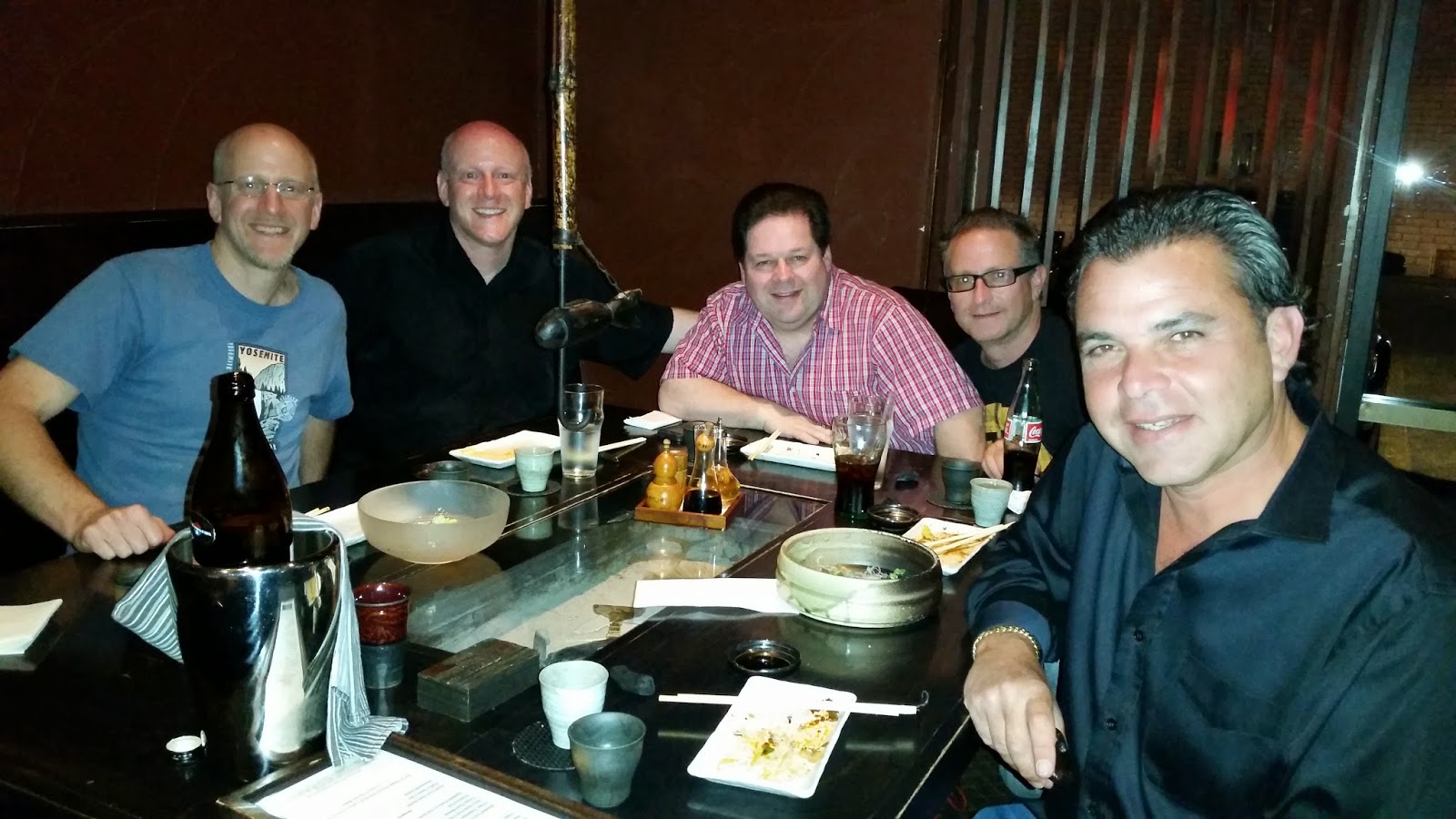 Five years ago, while in Las Vegas, I had an excellent dinner at Abriya Raku, a Japanese restaurant which then seemed to be a hidden treasure. Located in a small, Asian shopping center off the Strip, it was highly unlikely you would just stumble upon Raku. The area was filled with dozens of Asian restaurants, from Korean to Chinese, Thai to Japanese. You had to actively seek out Raku, but that meant someone had to tell you about it. You needed inside information, which I received from a few Las Vegas residents who raved about its cuisine. Based on those recommendations, I dined there and was thoroughly impressed.

Times have changed and Raku is now getting plenty of publicity. For example, it is currently #1 on Eater's 38 Essential Las Vegas Restaurants. You no longer need special insider information to know about this restaurant. However, I worried a little whether the restaurant had changed since my prior visit, whether all that publicity might have had a negative effect on this former hidden treasure. Despite my worries, I knew I still had to dine there again, hoping to recapture some of my previous joy.

On my trip to Vegas a couple weeks ago, I tried to make plans to dine at Raku and quickly noticed one change, that it was tougher to get a reservation there, even on a Tuesday evening. So if you want to dine there, I highly recommend making reservations as far ahead of time as possible. Fortunately, the five of us were able to get a table on a Thursday evening, and they sat us in a small private room that only had two tables.

I certainly enjoyed the intimacy of this room and I'm pleased to report that our dinner at Raku was as good, if not better, than my prior visit. The quality of their food has not diminished in the least, and their Sake list has exapnded. All of my friends were impressed with the cuisine, especially considering its affordability. Service was excellent and I continue to give Raku my highest recommendation. Fame has not diminished Raku in the least. 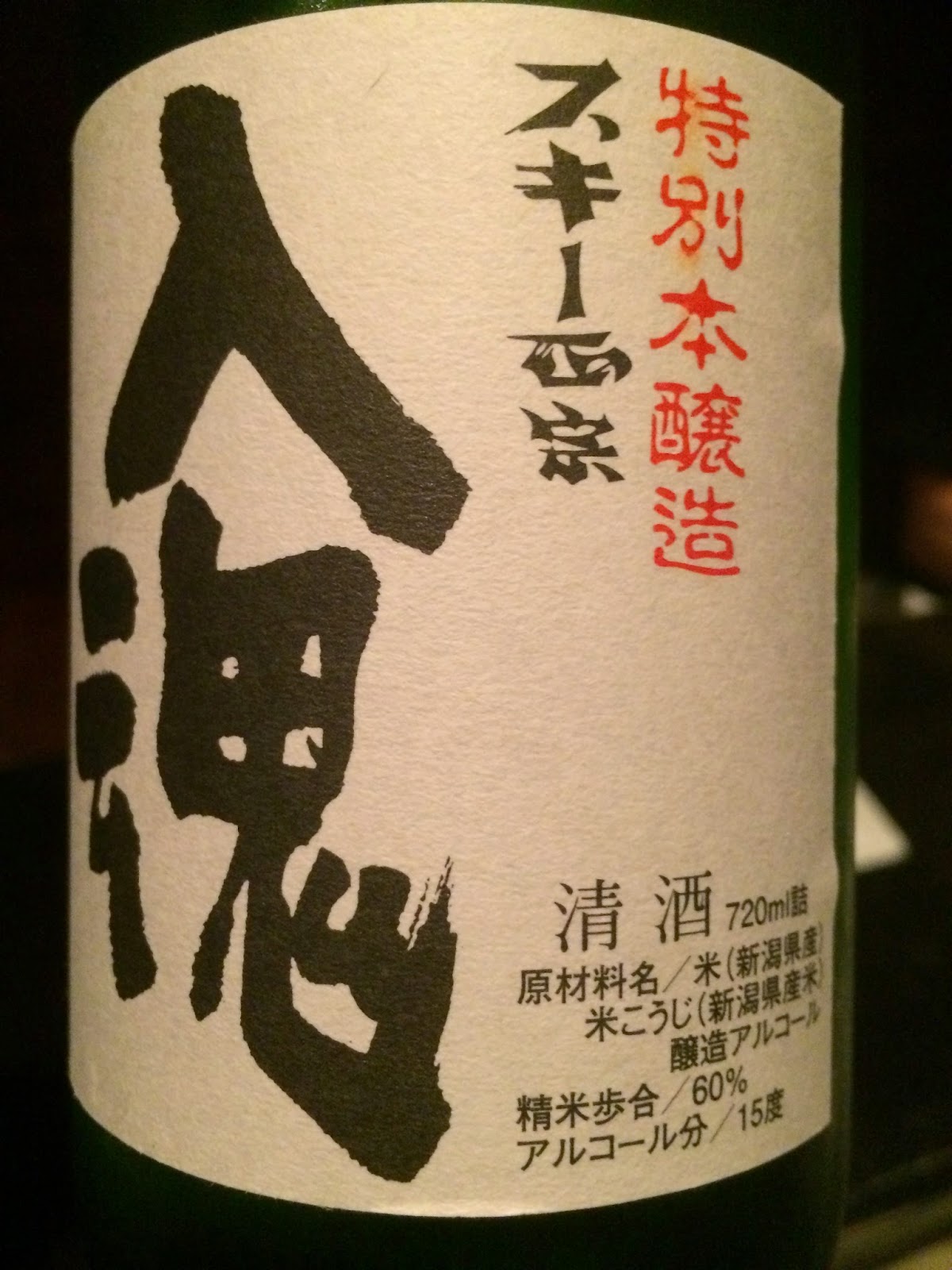 Raku's Sake menu appears to have grown, and now contains over 75 selections, from Junmai to Honjozo, Ginjo to Daiginjo, along with some Sparkling Sake and Nigori. Excellent diversity and plenty of interesting choices. Over 50 of the selections are available by the glass and some in "half" bottle formats. Price markups seem low, some of the best I've seen at any Japanese restaurant, and you could definitely while away an evening sampling and enjoying various Sakes. During the course of our dinner, we ordered three different bottles of Sake, none of which I had previously tasted. I wanted to experience something different, to continue expanding my Sake horizons.

We began with the Nyukon "Into Your Soul" Tokubetsu Honjozo ($52/24 oz), which can retail for around $30 so the markup is less than twice the retail, making it a very good value. Produced by the Musashino Shuzo, which is located in the Niigata Prefecture, they use Gohyakumangoku rice for this Sake which has been polished down to 60%, so it would technically qualify as a Ginjo though they do not label it as such. The taste was dry and clean, with subtle peach and melon flavors, and hints of herbs. Smooth and easy drinking, this was delicious and would appeal to Sake lovers as well as those new to Sake. It went well with our initial dishes, from tofu to seafood. A great starting point for the evening. 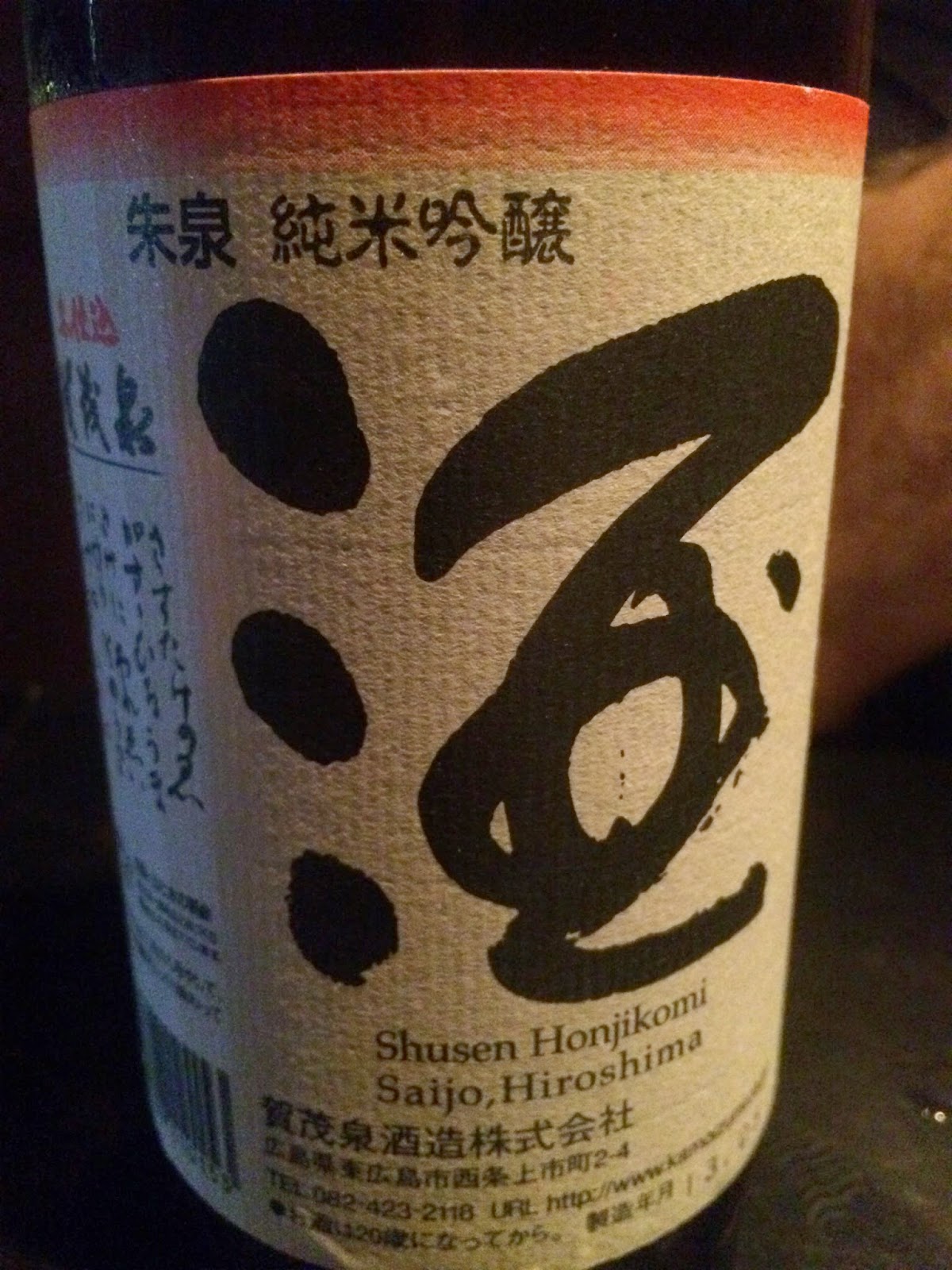 We then moved on to the Kamoizumi Shusen Junmai "Three Dots" ($50/30 oz), which can retail for $30-$35 so the markup is less than twice the retail, making it another good value. I should note as well that this bottle is 25% larger than the standard 24 oz bottle. So you get lots of Sake for the price. The Kamoizumi Shuzo, located in the Hiroshima Prefecture, started brewing Sake in 1910, and was one of ten breweries, in 1965, that committed to producing Junmai when nearly everyone else was making Honjozo. They use Hiroshima Hattan rice for this Sake which has been polished down to 58%, so it would technically qualify as a Ginjo though they do not label it as such. Another elegant Sake, this presents with a strong umami taste, more mushrooms and leafy herbs. It has a bit more body than the Nykon, but remains dry, smooth and easy drinking. This would be an excellent Sake with meat dishes. 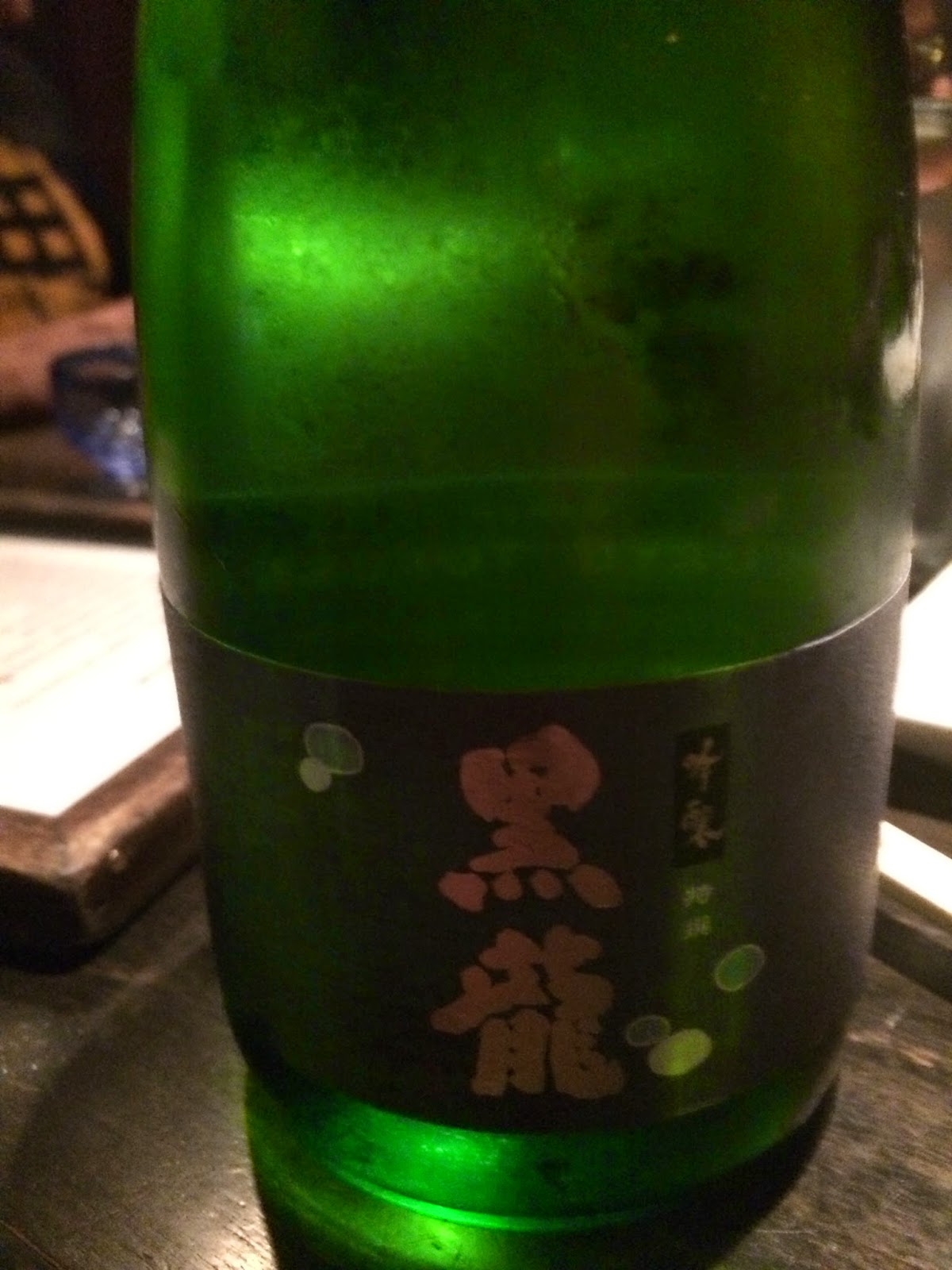 The final Sake was the Kokuryu Tokusen "Crystal Dragon" Ginjo ($58/24 oz), which can retail for $40-$43 so the markup is less than twice the retail, making it another good value. The name, Kokuryu translates as "Black Dragon" and the name derives from the Kuzu-ryo River ("Nine-headed Dragon" river) in the Fukui Prefecture. They use Gohyakumangoku rice for this Sake which has been polished down to 50%, so it would technically qualify as a Daiginjo though they do not label it as such. This was a more powerful Sake, with bolder flavors of fruit, especially melon, pear and even a bit of cherry. There were depths to the Sake as well, showcasing hints of other, nearly elusive flavors. Definitely a Sake to slowly savor, to enjoy its complexity. It also paired very well with the various Robata skewers we enjoyed. 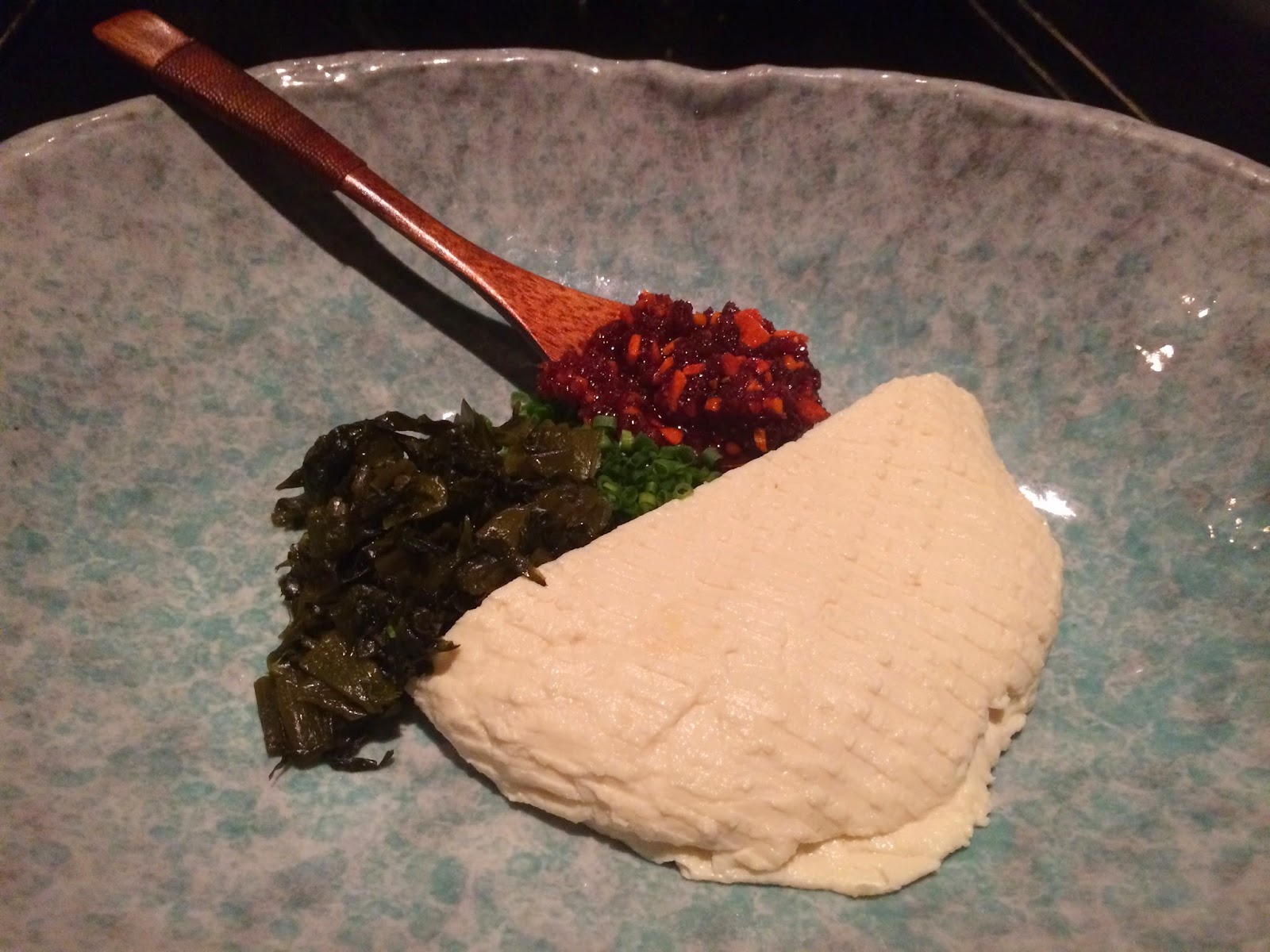 As for our food choices, we ordered a number of their evening Specials as well as numerous dishes off the menu. As the evening was primarily about enjoyment, I didn't take notes of everything we ate, though I took numerous photos. As such, I can't provide lots of detail of many things we ate, though I can say that everything was delicious, well-presented and I would recommend all of it. This is some of the best Japanese food you will enjoy in Vegas.

Above, is one of their homemade Tofu dishes, accompanied by a spicy side. I'm not a fan of Tofu but I actually enjoyed this dish. The tofu was creamy and clean rather than rubbery, and the spicy side went well atop a piece of the tasty tofu. So even if you dislike tofu, I'd suggest you give it a try at Raku. They have a few different Tofu dishes and they are worth exploring. 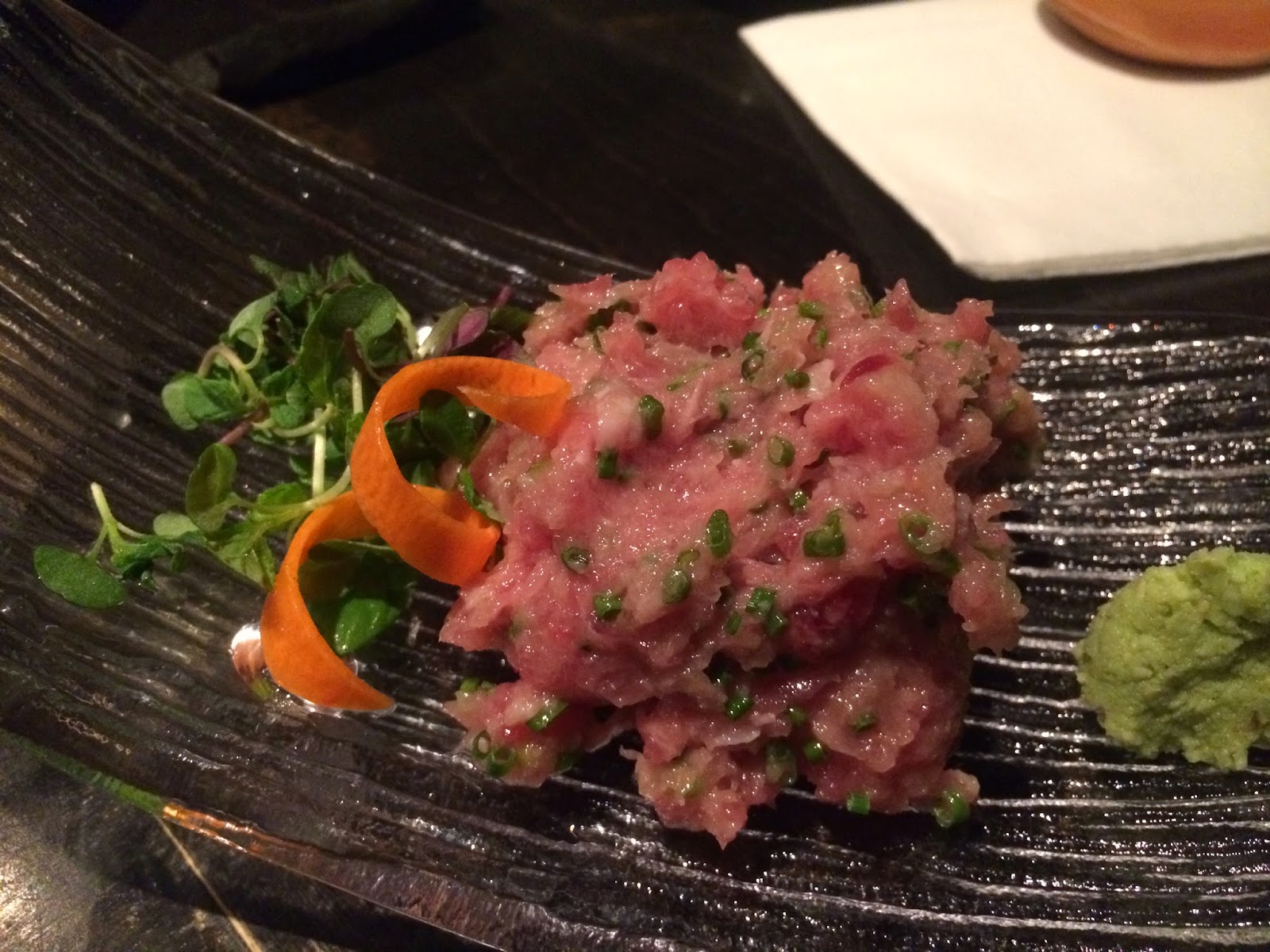 One of the Specials was a Tuna Tartare, a silky mound of tender tuna, with only minimal accompaniments, making the dish all about the tuna. I prefer my tartare to be more minimalist, to be more about the meat than what is atop it, and this fit that bill. 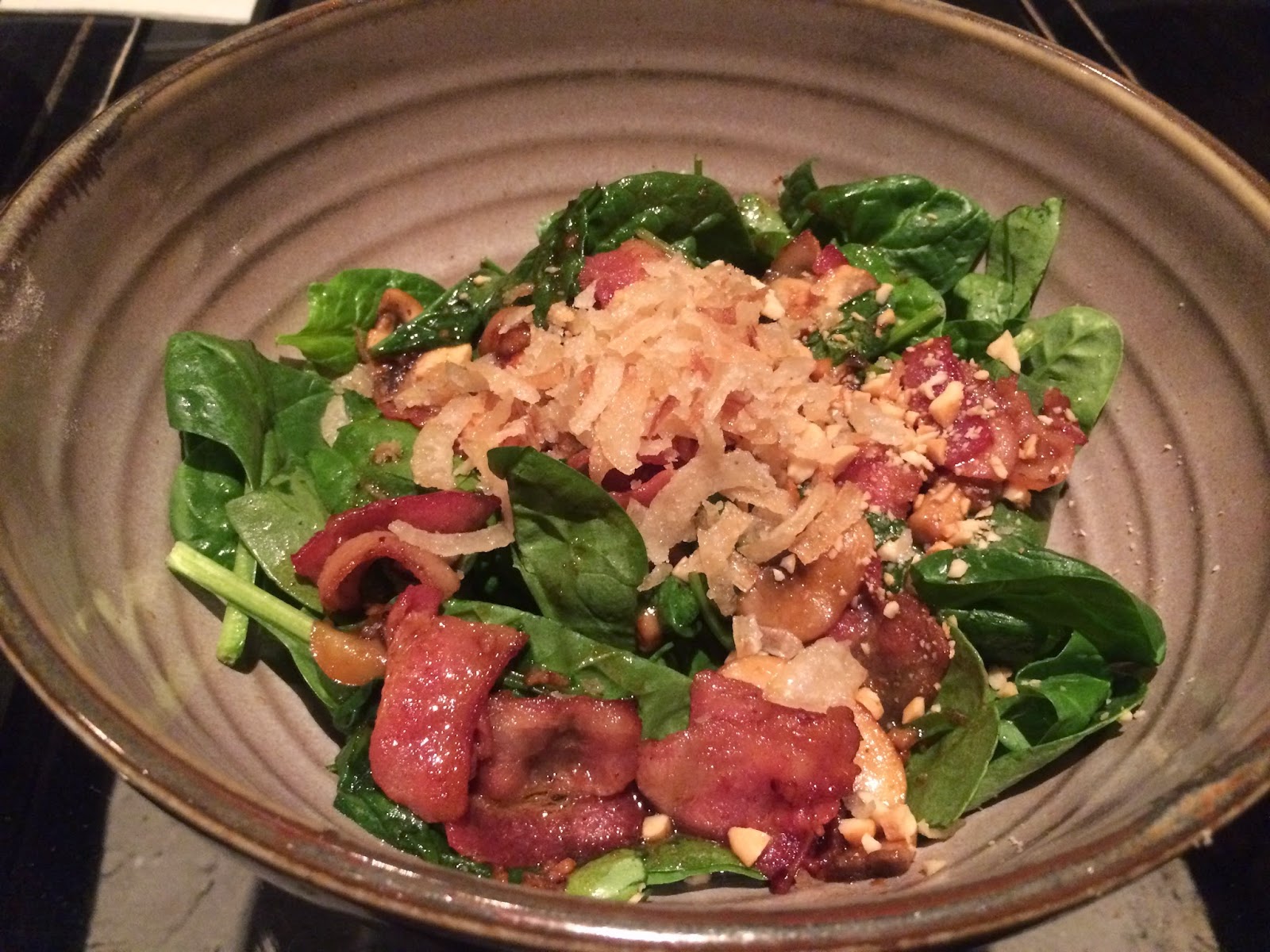 A Salad which had bacon, so that automatically elevates it above other salads. Lots of fresh ingredients. 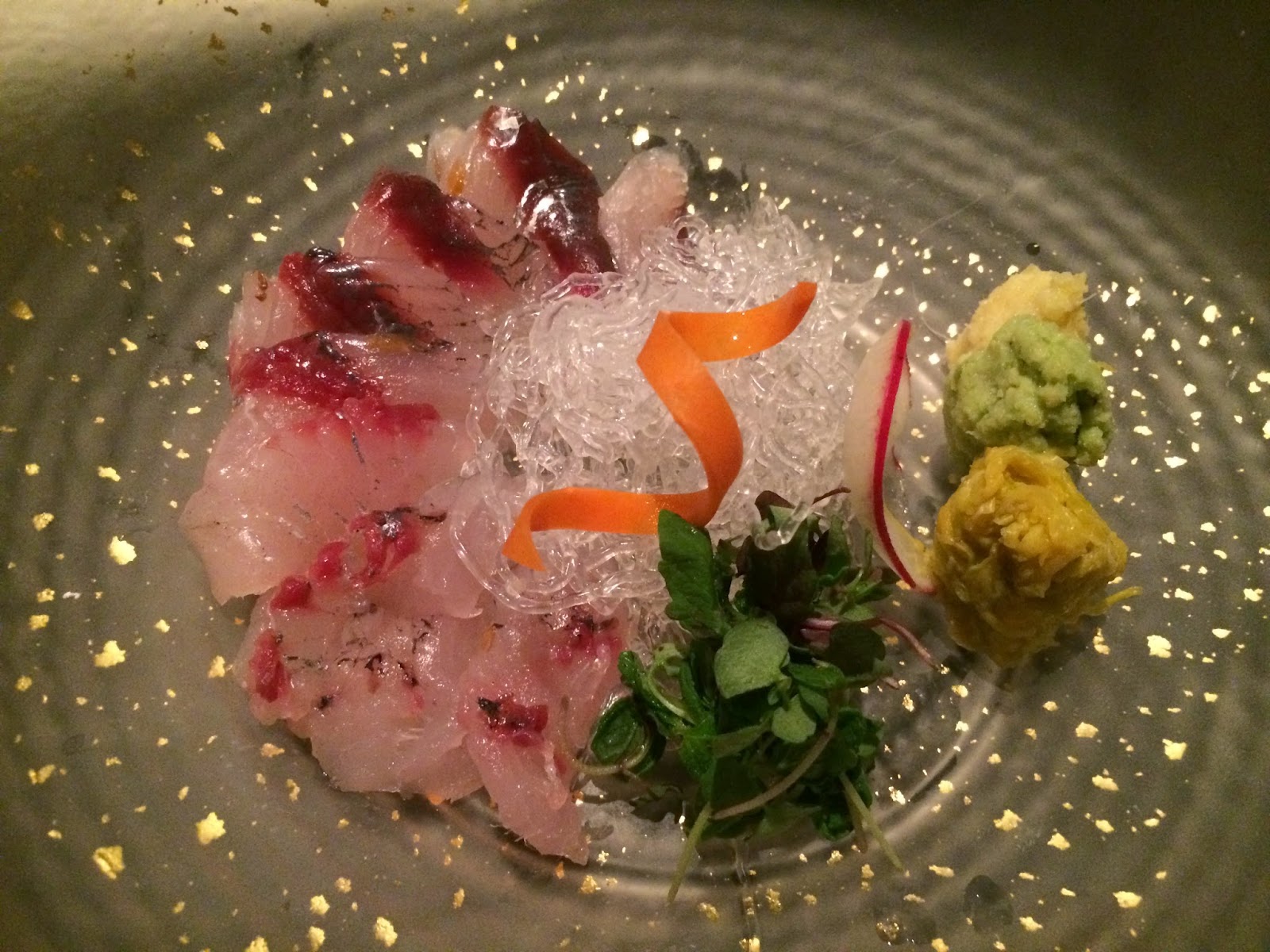 There were two fish on the Specials menu, Flying Fish and Sea Bream, and each was served two ways, as a sashimi and a cooked, whole fish. Above is the Flying Fish sashimi, which had a stronger, but pleasing, flavor than the Sea Bream. The texture of the fish was tender and smooth, with just enough bite to it. 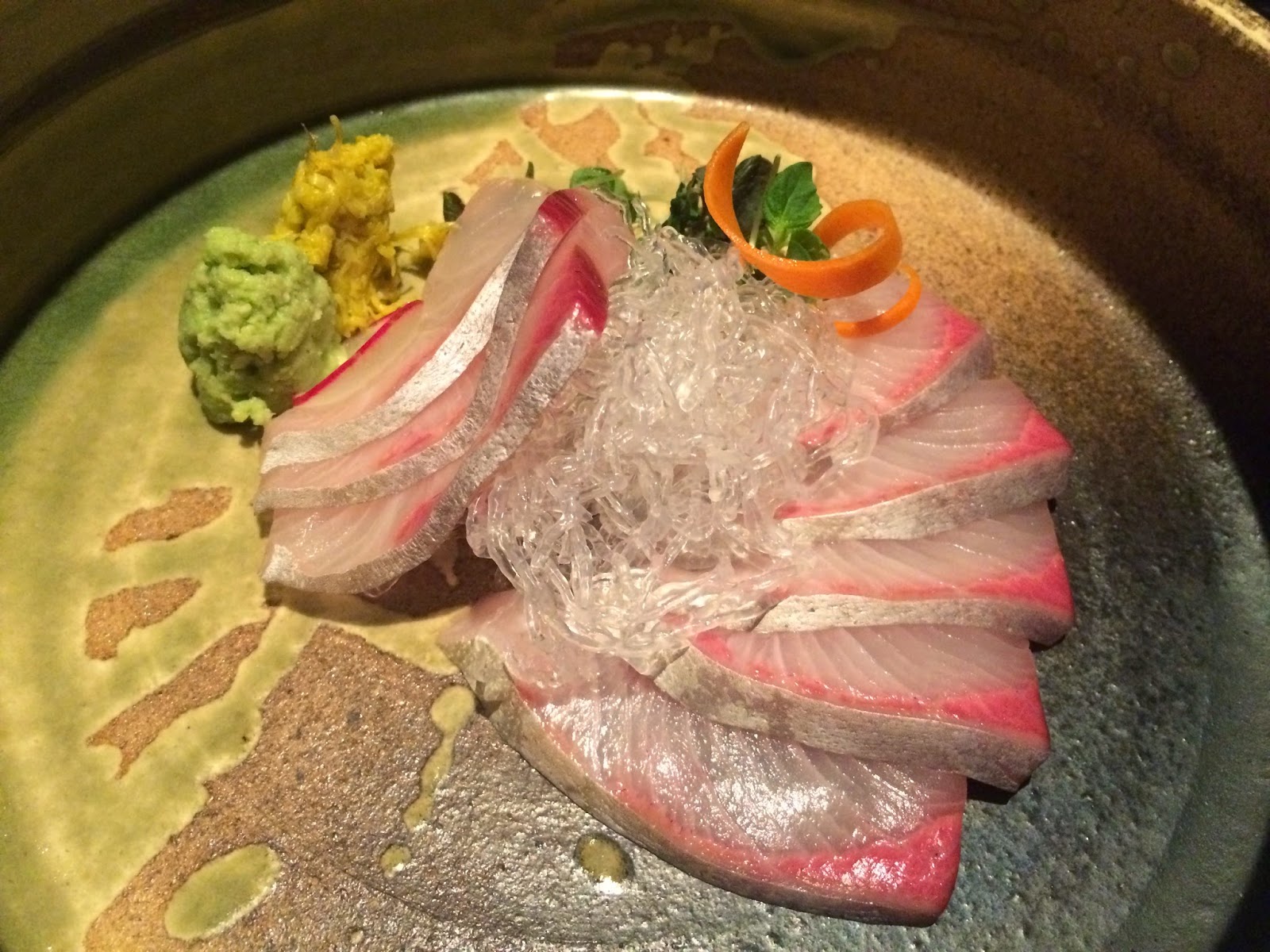 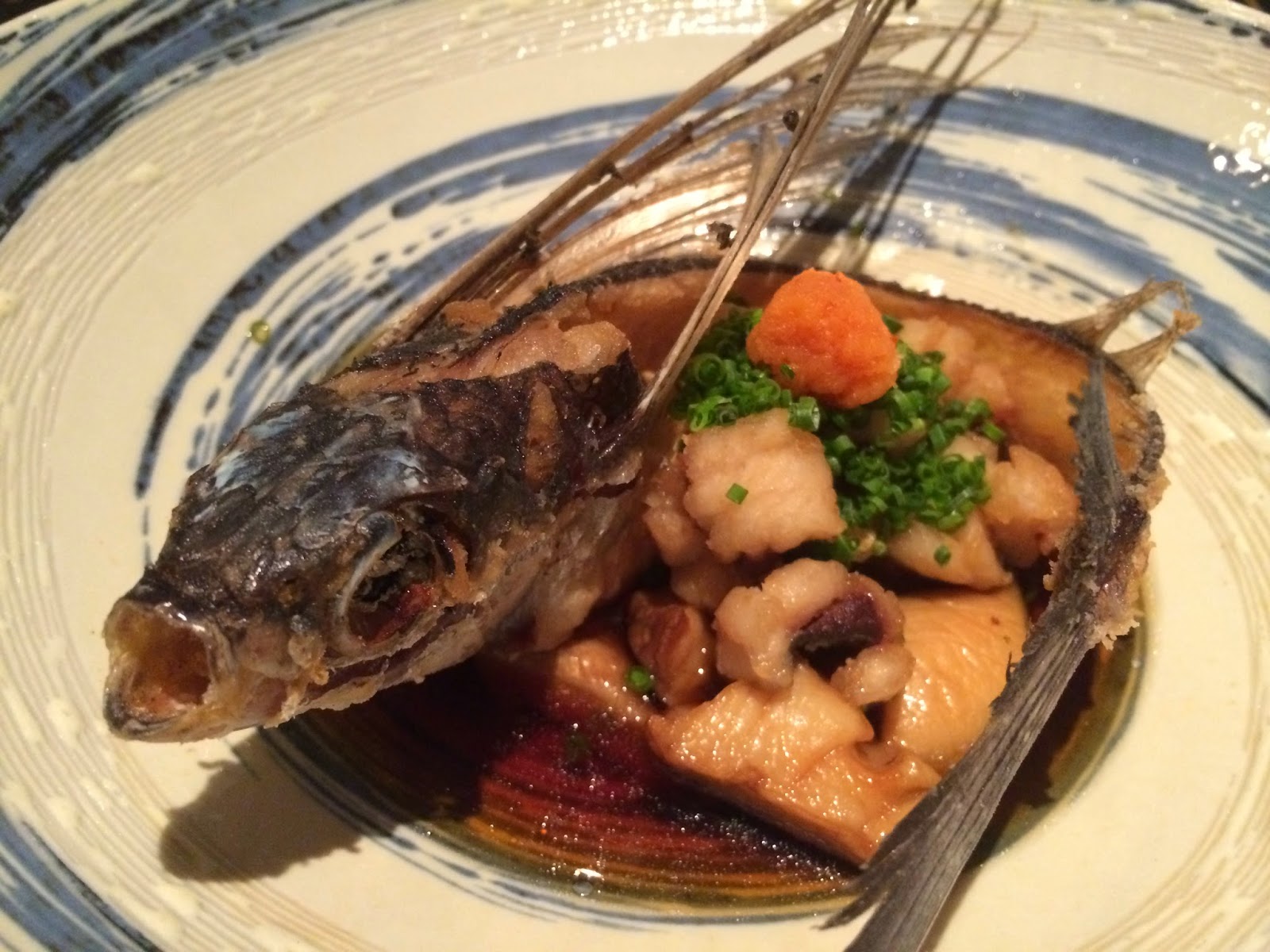 The cooked Flying Fish had hearty chunks of meat, strong and tasty flavors with a nice broth. 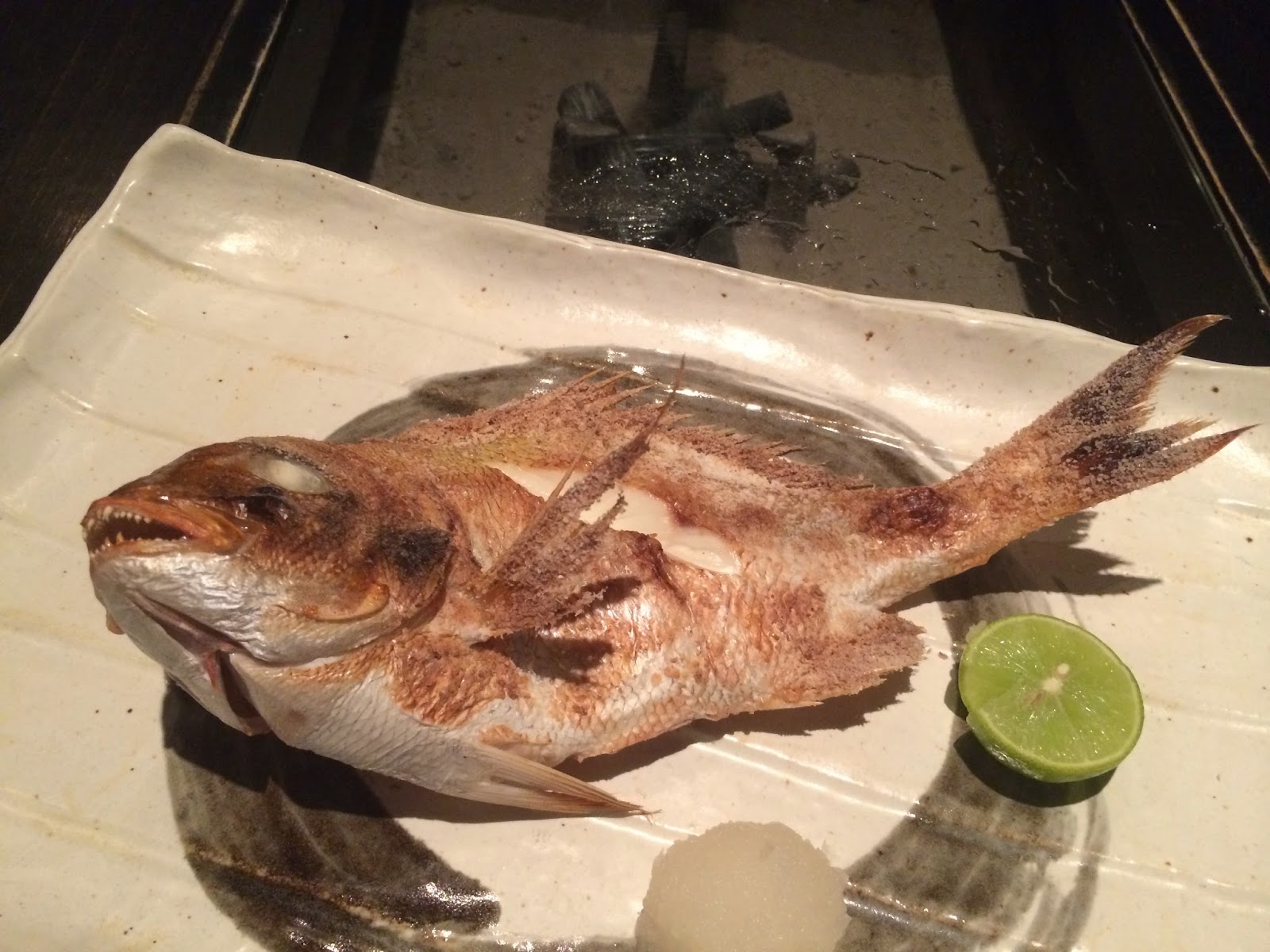 The Sea Bream's flesh was mild and flaky, with a nice sweetness to the flesh. And the skin had a nice, crispy texture. 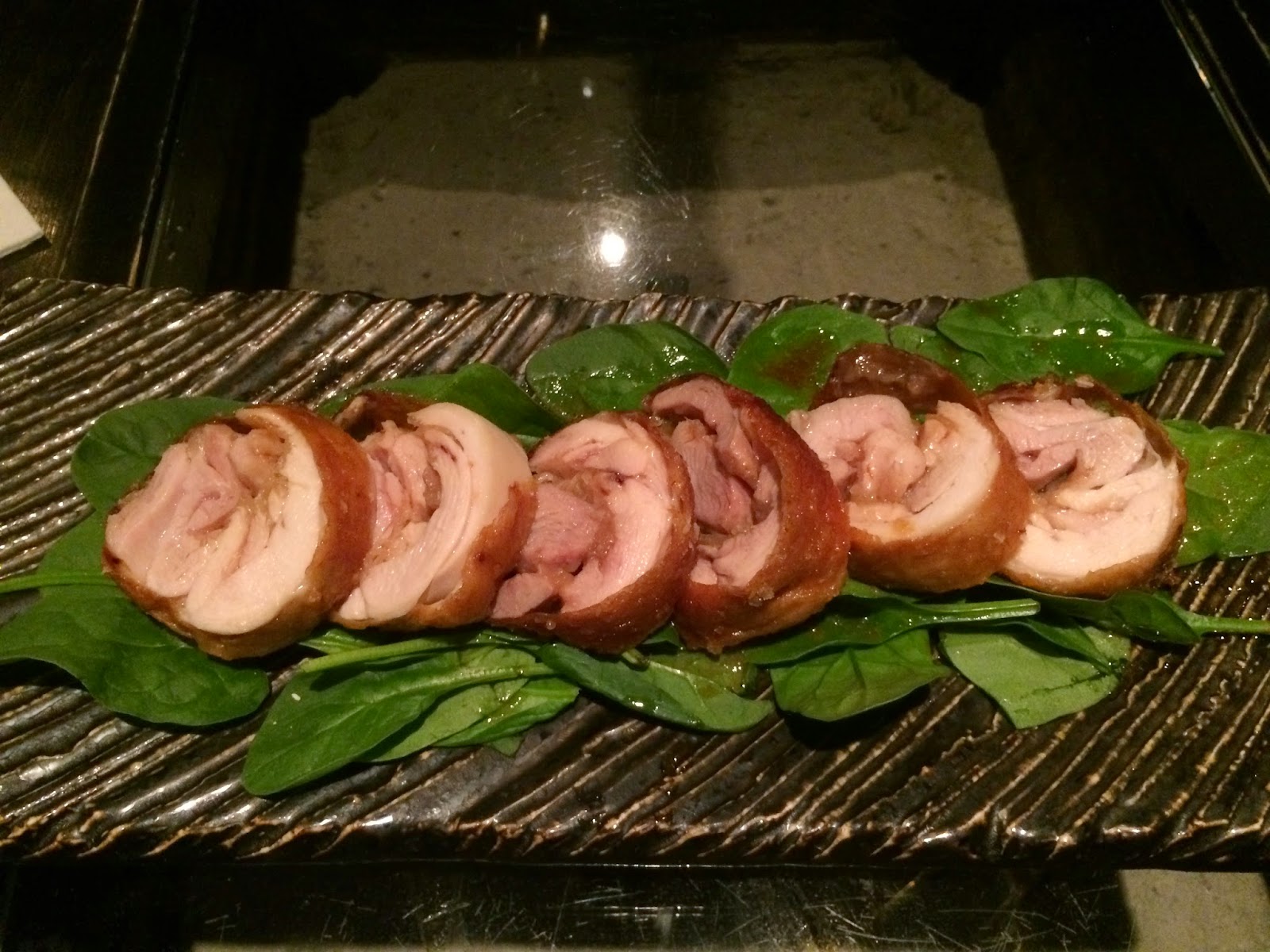 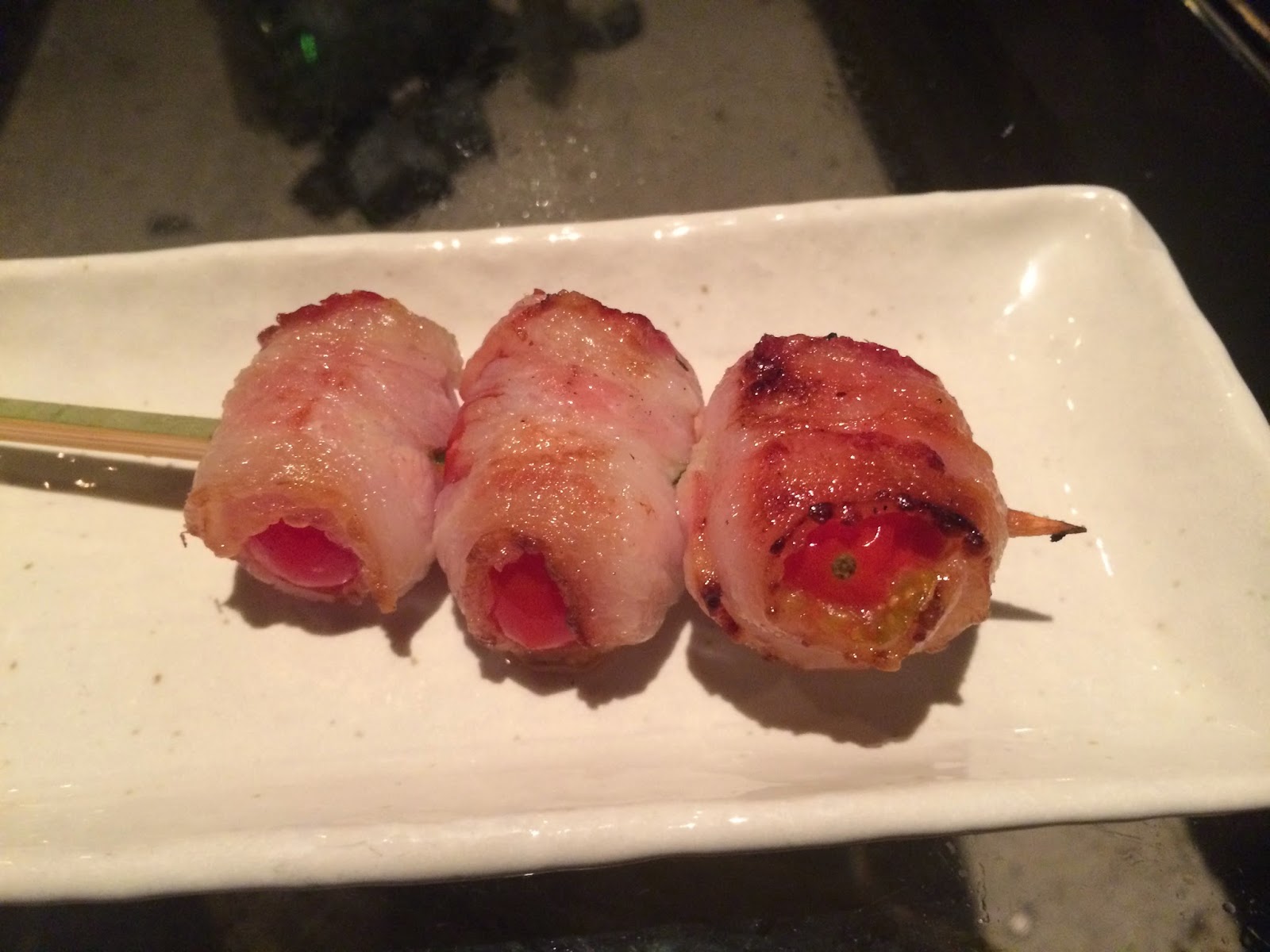 One of their specialties is Robata, a charcoal grill that uses binchotan, a traditional Japanese charcoal which burns at a higher temperature than regular charcoal, and also contains less moisture. There are over 30 Robata choices, a variety of skewers of meat, seafood and vegetables. We ordered maybe a dozen or so skewers, including Pork Ear, Duck with Balsamic Soy Sauce, Tomatoes Wrapped in Bacon, and more. It was all excellent, grilled perfectly, and full of interesting flavors. You could easily make a meal of just different skewers.

Raku is one of the best Japanese restaurants in Las Vegas, and also one of the most affordable. If you check out their menu, you will find most items cost under $10, so that even if you go with a group, your bill will still be very reasonable. In addition, their Sake is very reasonably priced, avoiding the outrageous markups that are very too common everywhere else. On the Strip, the Japanese restaurants are generally much more expensive, and it can be hard to find more than a couple items on their menus under $10.

With an excellent Sake list, great service, and a nice diversity of delicious dishes, Raku continues to earn my highest recommendation. If you are traveling to Vegas, make sure to dine at Raku, but just make your reservations as early as possible. Raku is hidden no more, but success hasn't gone to their heads.
Posted by Richard Auffrey at 3:00 AM