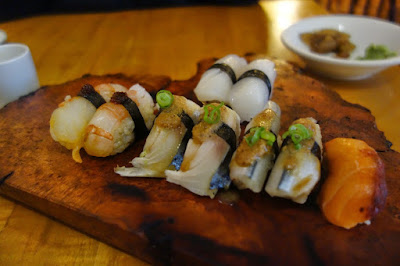 The documentary Jiro Dreams of Sushi has received many, well-deserved raves and garnered great fame for sushi chef Jiro Ono, the owner of Sukiyabashi Jiro, a 10-seat, sushi-only restaurant in Tokyo that has earned three Michelin stars. At this restaurant, for about $300, you'll receive a tasting menu of approximately 20 courses. Reservations must be made at least a month in advance, and they have no shortage of customers willing to pay for the experience.

One common criticism about the restaurant is that the meal seems rushed, that you finish your meal in only about thirty minutes. The criticism has some validity, though the shortened dining period is intentional, and based on a few different reasons.

In the U.S., such multi-course meals are usually extended over of the course of two to three hours, if not longer. When you pay such a high amount for your dinner, many expect to enjoy a leisurely meal, making it a lingering experience. They want to slowly savor each course, to appreciate all that the chef invested in each dish. When they are paying such a high amount of money, they want to derive value and perceive value to include a lengthened dining experience.

If a local restaurant tried to push its diners to finish a large tasting menu in half an hour, there might be a revolt. Reviewers would probably scold and penalize such a spot,  complaining the unnecessary rush. On places like Yelp, such a restaurant would get plenty of One Star reviews.

However, can such a "rushed" tasting menu be justified in any manner?

One of the primary reasons why a meal at Sukiyabashi Jiro is compacted into a short time period is based on science. It takes the human body about twenty minutes to become satiated after eating. The longer you continue to eat, the more and more full you will feel, and the less and less you will appreciate the later courses you eat. If you consume your entire meal in about thirty minutes, then you are more likely to appreciate and enjoy each and every course. Chef Ono wants every course to receive the full attention of his customers.

Think about those lengthy tasting menus you have experienced, and try to remember how you felt during the later courses. I'm dined with a number of people who have spoke of being full, but who still continued on, finishing the last few courses, but really not enjoying them to their fullest. This provides support to Chef Ono's thoughts, and maybe other restaurants should pay heed. Maybe tasting menu meals in U.S. restaurant should be eaten quicker than the usual time periods. We might not have to cut them down to thirty minutes, but cuts might be justified.

There would be a trade-off involved, a lessened "experience" but with a reward of a greater enjoyment of your food. How much do you value the experience of a lengthy tasting menu, knowing that you probably won''t properly enjoy the later courses of your dinner? How important is it to you to experience the food at its optimal condition? Would you still be willing to pay the same amount for a tasting menu that occurs during a much shorter time period?

What are your thoughts?
Posted by Richard Auffrey at 3:00 AM