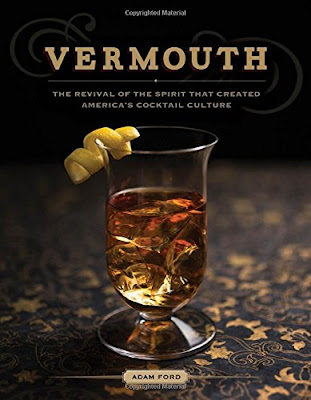 It may be one of the most ignored wines, often seen more as a minor cocktail ingredient. However, this wine, Vermouth, is a fascinating beverage, with a rich history, and modern producers, including a number in the U.S., are producing Vermouths of quality and complexity, worthy of consumption on their own. There is a definite need for education about Vermouth, for someone to tell its story,and Adam Ford has written a book which well serves that purpose.

Published earlier this month, Vermouth: The Revival of the Spirit that Created America's Cocktail Culture by Adam Ford (Countryman Press), is available as a hardcover of 240 pages ($24.95),or an E-book ($11.99). In 2012, Adam Ford founded Atsby Vermouth in New York and now produces two Vermouths, the Amberthorn and Armadillo Cake. Each Vermouth has its own secret blend of botanicals, presenting intriguing and complex flavors. Adam is a passionate advocate for Vermouth, frequently speaking and educating others about this unique wine.

"I wrote this book because I fell deeply in love with a delicious aromatized wine while walking through the Italian Alps."
--Adam Ford (p.11)

Ford's new book is broken down into four chapters: The History of Vermouth, Vermouth in America, American Vermouth Today, and Vermouth Cocktails. Throughout the book are plenty of colorful photos and a few sidebars on vermouth-related topics.

The History of Vermouth begins in China, about 7-8 thousand years ago, with wine enhanced with botanicals. This might be the earliest prototype of Vermouth. Plenty of other ancient cultures drank similar wines mixed with botanicals, from Egypt to Rome, Ford presents a fascinating historical tale which proceeds to the Middle Ages, and beyond, noting how spices and herbs became seen as medicinal, and wines created with such ingredients were seen as healing elixirs. There is a discussion of wormwood, and the wines that were created using it, as well as information on Antonio Carpano, often seen as the inventor, or at least the popularizer, of modern Vermouth. This chapter is an excellent way to understand the origins of Vermouth, providing lots of historical tidbits to tantalize your brain.

"For the past 150 years, vermouth has shaped cocktail culture in the United States more than any other spirit."
--Adam Ford (p.75)

Vermouth in America continues the historical narrative, concentrating its appearance in the U.S., especially in New York during the 19th century. Again, Ford presents compelling facts about the early history of Vermouth, and how it became an important element of the new cocktail culture. At that time, Vermouth was both drank straight and in cocktails, often being the primary ingredient. By the 1890s, some New Yorkers tried producing their own Vermouth, as did others from Ohio to California, though none acquired commercial success.  The chapter continues detailing Vermouth's history in the U.S. into the 20th century, from Prohibition and beyond. You'll certainly leave plenty about Vermouth's presence in our history in this chapter.

"Today, however, American producers are making vermouths that taste nothing like one another, and nothing like their European counterparts."
--Adam Ford (p.141)

"The secret to using quality vermouth in a cocktail is to use more vermouth than spirit; otherwise you risk washing all the nuanced flavors away with the heavier-proof spirit."
--Adam Ford (p.,174)

The final chapter, Vermouth Cocktails, presents 23 Vermouth cocktails, divided into Brunch, Apertif, Modern and Late-Night categories. You can also find another 16 cocktails throughout the rest of the book. Probably the majority of recipes call for Atsby vermouths, though the others reference other Vermouths or are more generic. You'll find classic cocktails like the Manhattan to more inventive ones like the Hanky Panky. These are cocktails intended to showcase Vermouth as the main ingredient.

"The most important thing for American vermouth producers going forward is to protect vermouth from the axes that hack. In other words, never let vermouth revert back to a mass-produce, undifferentiated, industrial product made for mixing."
--Adam Ford (p,169)

Overall, this is a fun, informative and fascinating book about Vermouth, filling a gap and helping to educate wine and cocktail lovers about this intriguing wine. This book is well written and appears to be very well researched too, It helps to clarify common misconceptions about Vermouth, presenting information you probably won't find elsewhere. I would have liked to see some information on Vermouth and food pairings. There is a brief mention of classes and dinners with such pairings, but there isn't any practical information provided.

I highly recommend this book, hoping more people gain an appreciation for this unique wine.
Posted by Richard Auffrey at 3:00 AM