Bodega Garzón: From Albariño to Tannat 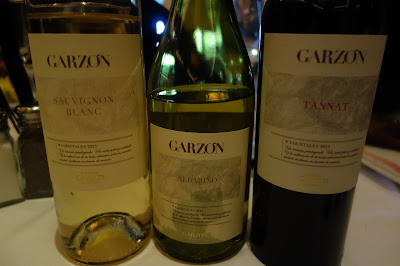 The wines of Uruguay have started to make their mark in the U.S., and deservedly so, and their popularity will only continue to grow as their presence expands in the market. Last September, I attended a large Uruguayan trade tasting, and was thoroughly impressed with what I tasted. Check out my prior articles on the Wines of Uruguay: Part 1, Part 2, and Part 3. These articles cover everything from history to tasting notes, grapes to wineries, giving you an intriguing glimpse into Uruguay.

Recently, there was another major Uruguayan trade tasting event, and I had the opportunity to learn even more about their wines. Prior to this event, I attended a media lunch at the Capital Grille with Gilles de Chambure, MS, who does some work for the Wines Of Uruguay. He wanted to share with me some information and wines from Bodega Garzón.

Alejandro Bulgheroni, an Argentinian, got his start working in the energy sector, including a number of agro-industrial projects. Around 1999,  Alejandro and his wife, Bettina, came to Garzón and were enamored with the land, eventually deciding to purchase 2200 hectares of land and 2000 hectares of forest. They first planted olive trees to produce olive oil, and almond trees, because Bettina wanted them. Today, they grow 14 types of olives, almonds, blueberries and pecans.

Alejandro eventually decided he also wanted to grow vineyards and produce wine, so he hired Alberto Antonini, an enologist from Tuscany, to make that desire a reality. In 2007, Antonini started to examine the region, checking its soils and terroir, trying to ascertain what might grow best. In 2008, the first vines began to be planted.

Bodega Garzón is located in the eastern border of the Maldonado region, about 11 miles from the Atlantic Ocean. It is one of the only wineries in this region, though others have started showing interest in expanding into the area. Currently, the bodega owns about 500 acres of vineyards, broken down into 1000 different lots. They grow grapes including Tannat, Merlot, Cabrnet Franc, Pinot Noir, Marselan, Caladoc, Albarino, Sauvignon Blanc, Pinot Grigio, Viognier, and Petit Manseng. Despite that diversity, about 80% of their vineyards are planted with Tannat, the signature grape of Uruguay.

Their latest project is the construction of a new, state-of-the-art winery which will be LEED Certified (Leadership in Energy & Environmental Design), and that will make them the first sustainable winery outside the U.S. with that certification. Bodega Garzón is passionate about sustainability and plan to open the new winery by December. About 25 hectares of their vineyards are organic and their goal is to eventually become 100% organic. The 2015 harvest is considered to be an exceptional vintage so you should look forward to those Uruguayan wines in the near future.

One of the factors that makes Uruguay, which has 410 miles of coastline, unique in the wine producing nations of South America, is that part of the country, especially the Maldonado region, is influenced by the Atlantic Ocean. Penguins can also sometimes be seen on the beaches in Maldonado. In some respects, Maldonado can resemble parts of Spanish Galicia, which may explain why Albariño may do very well in that part of Uruguay.

Only three wines from Bodega Garzón are currently imported into Massachusetts by Carolina Wine & Spirits, including a Sauvignon Blanc, Albariño and Tannat (priced around $15-$20). I tasted previous vintages of the Sauvignon Blanc and Albariño and enjoyed them, so was pleased to taste different vintages, and see how they paired with food.

The 2013 Sauvignon Blanc was bright and crisp, with summery tastes of citrus and grapefruit. There were not any grassy notes, and it was more on the leaner side, an excellent wine for seafood or a warm summer day. Nicely balanced, it had plenty of character for the price, and should appeal to many consumers.

I was even more impressed with the 2014 Albariño, and Garzón is one of only two producers of this grape in Uruguay. It spends all of its time in stainless steel and has some aging on the lees. It had excellent acidity, with bright citrus flavors and hints of tropical fruits as well. The longer it sat in the glass, it began acquiring more of a creaminess to the body, due to its lees aging. You would be hard pressed not to think this was a Spanish Albariño. With a creamy Lobster Bisque, it paired well, the acidity cutting through the creamy fat of the bisque. Highly recommended. 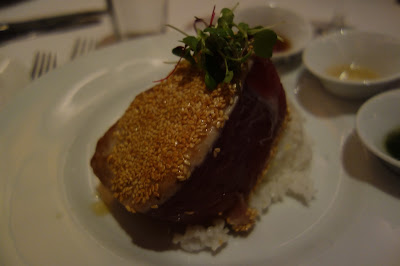 With a Tannat, you might readily choose to pair it with a steak, which is always a fine choice. However, I decided to try some seafood, the Sushi-Grade Sesame Seared Tuna with Gingered Rice (pictured above). The 2013 Tannat is produced with a little Petit Verdot, Cabernet Franc, Marselan, and Caladoc.  It is aged in large oak barrels for about 18 months, using larger barrels as they want to show more of the fruit of the Tannat.

It is a muscular wine, one of power, yet there is still restraint and the wine isn't overly tannic or unwieldy. It is under control, presenting with delicious ripe plum and black cherry flavors, and hints of spicy undertones. The fruit dominates but it isn't a one-note wine, with more complexity than you might expect for a wine of this price point. It went very well with the seared tuna, the richness of the raw fish harmonizing well with the power of the Tannat. Highly recommended.

Check out the wines of Bodega Garzón at your local wine shop, or ask your shop owner to order them for you. And seek out other wines from Uruguay too.
Posted by Richard Auffrey at 9:18 AM